How to unlock: Complete Mankind Redefined in the Institute (M5,6). 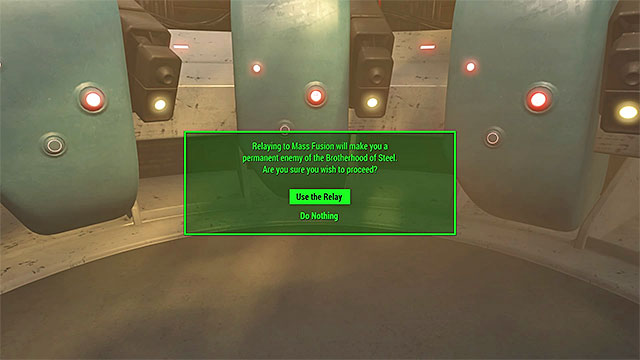 First of all, you need to meet up with Allie Filmore at the Institute, who provides you with details of your quest. Doctor Filmore wants to accompany you in your new quest and you do not need to worry about any risk that this may carry, because she cannot die. Do not access the world map and use the elevator instead to reach the relay that you have used to get to the Institute the first time around. Confirm that you want to use the relay (the above screenshot) - doing this means becoming the enemy of the Brotherhood of Steel. You will travel to the Mass Fusion building.

Note - before you relay, it is necessary that you obtain Hazmat Suit, which you can buy, e.g. in Diamond City. This is important, because later into the quest, you will have to enter a highly-irradiated room, where Rad-X and RadAway are of little use. 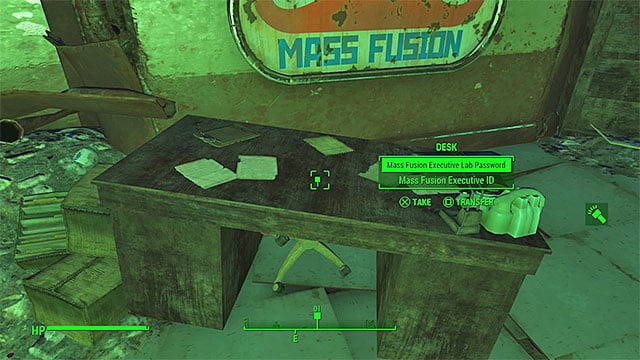 After you reach your destination, eliminate all of the enemy soldiers of the Brotherhood of Steel and beware especially of the more heavily-armored ones. You cannot use the elevator here yet, because you first need to obtain the ID. The Mass Fusion Executive ID is in the desk shown in the above screenshot. Apart from that, you also find the Mass Fusion Executive Lab Password here. Locate the terminal and hack into it. Select the first item on the menu, thanks to which you learn that you need to search for the reactor at the underground level 01.

Go to the reactor level 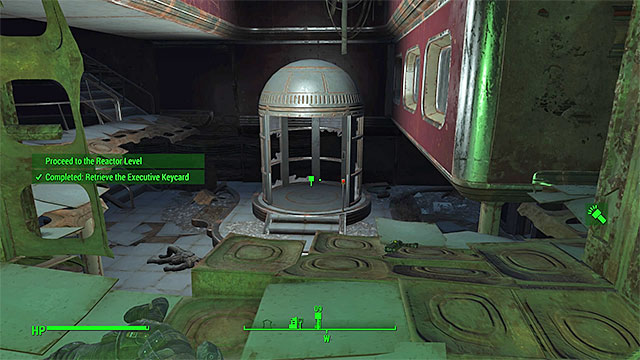 The elevator that you need to use

You can now go to the elevator and interact with the ID Card Reader to set it into motion. Prepare a good weapon for ranged combat, because you will be attacked by more Brotherhood of Steel members during the ride. Try to remain at the back of the elevator and use V.A.T.S. To target and eliminate enemies. 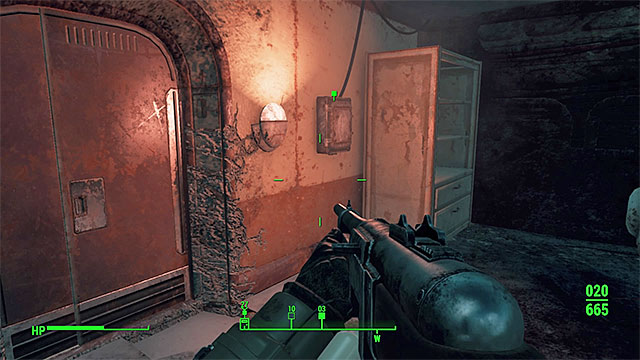 It is best to reach the fuse box

After the elevator will be immobilized, leave and eliminate all of the remaining soldiers of the Brotherhood of Steel. It would be good to complete the optional quest objective, where you need to restore power supply to the elevator. To do this, jump to reach the balconies above and go to the marked room, where you find the fuse box. You can now return to the elevator and wait for it to reach the next floor.

Note - If you have problems making it over to the fuse box, you can also search this level for the Mass Fusion Labs Key. Thanks to this, you will gain access to the room with a hole in the floor, which is an alternative route to the foyer. However, keep in mind that this way you will have to defeat more opponents. 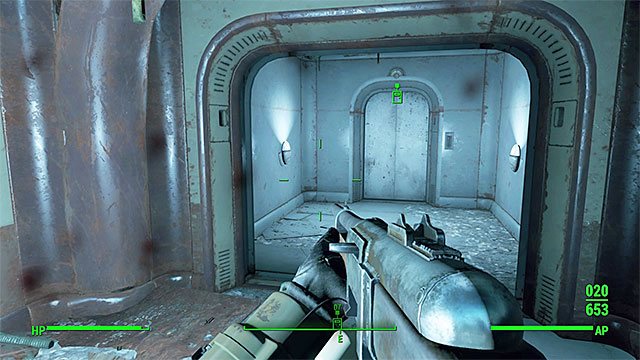 The cargo elevator travels to the basement

After the elevator ride ends, another fight starts, this time in the foyer of the building. During combat, apart from the members of the Brotherhood of Steel, you also need to watch out for laser turrets that it would be best to destroy in the first place. After the combat, walk over to the nearby cargo elevator and use the ID on the ID reader, to set the elevator into motion. This way you will get to the building's basement. 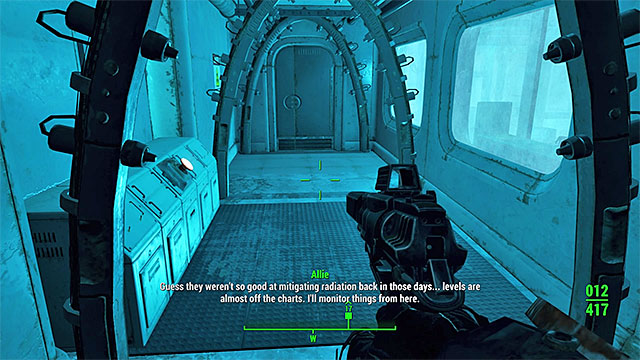 The passage to the reactor room

Continue along your path, up until you reach a room with a large glass wall. Locate the corridor with the switch and, before you press it, put on the Hazmat suit, thanks to which you will be protected from radiation. Only after you do that, press the button and after the decontamination procedure ends, walk into the room with the agitator.

Note - It is a good idea to save the game at this point, because there are other unpleasant surprises here, apart from radiation. 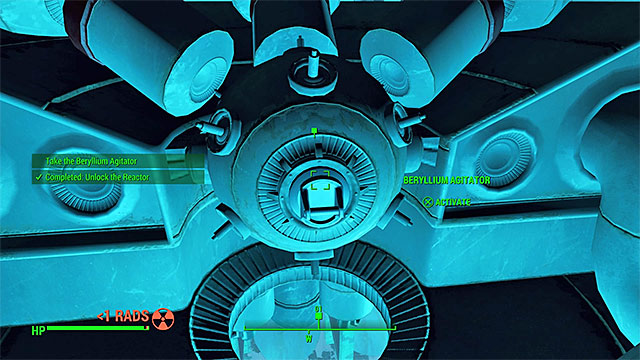 This is where you find the agitator

The room is highly-irradiated, but if you are using the jumpsuit, you do not need to worry about it. Start by getting to another switch that opens the reactor . You can now collect the Beryllium Agitator.

Deal with security at the reactor level 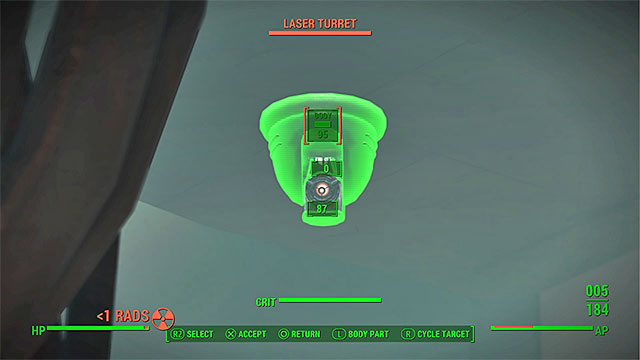 Now, the most difficult part of the quest - the facility's defenses have activated and you need to deal with that problem, as quickly as possible. First of all, use a good rifle to destroy the two turrets mounted under the ceiling of the reactor room. Remember that since you are wearing the Hazmat suit, you are vulnerable to fire, so take quick and accurate shots at the turrets (you can use V.A.T.S. here and/or retreat into a safe spot, where you will not be taking fire from both of the turrets. 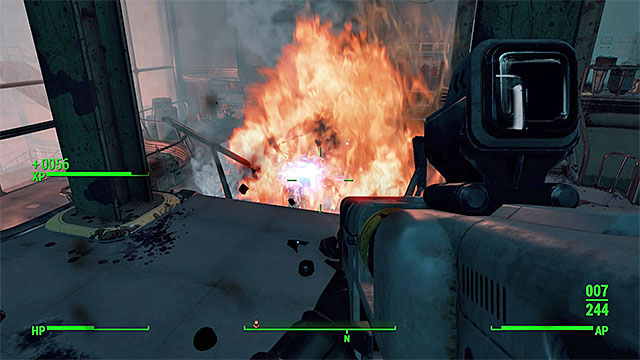 Deal with all of the hostile machines

Return to the narrow corridor, put on your main suit again and initiate the decontamination procedure again. Do not hurry to get back to your allies, because in the room that they are in, soon arrive powerful robots. The first one is a Sentry Bot. It is a good idea to use the rocket launcher to destroy it, or any other weapon with similar firepower. You can attack while remaining in the narrow corridor, but be careful and make sure that the projectile does not explode too close to you. Also, do not stand too close to the Sentry Bot, because it explodes at the moment at which you destroy it.

After you deal with the Sentry Bot, attack Assaultrons. It is a good idea to use a good rifle or a shotgun for medium-range combat, here. Head towards the building's exit. Along your path, you should encounter one more Protectron that you can destroy using, e.g. grenades or a good rifle. 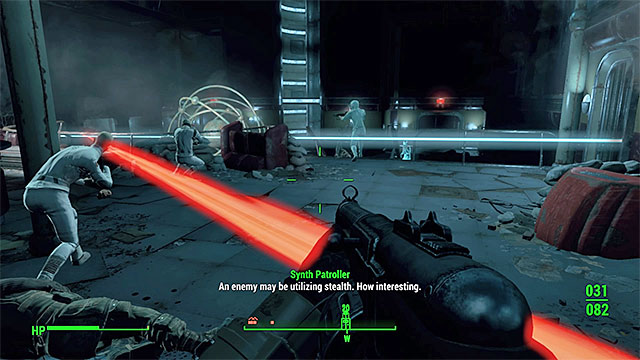 Take the cargo elevator again, thanks to which you return to the foyer. Here, you can complete the second optional objective, which is helping Synths fight off soldiers of the Brotherhood of Steel. It is a good idea to do this and just like earlier, beware of the enemies wearing power armors. Regardless of whether you have actually helped Synths or not, leave the building. Travel to the Institute and talk to Allie Filmore to give her the agitator.