How to unlock: You must win the battle in the Castle (M7,1) during the Defend the Castle Minutemen quest.

Talking with Preston and with Sturges 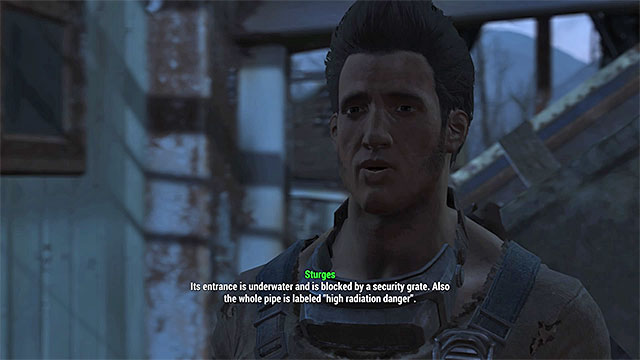 You can meet with Preston Garvey immediately after winning the battle in the Castle during the previous main quest, Defend the Castle. He will tell you that Sturges had found a way to get into the Institute without having to use the teleport. Go to Sanctuary where Sturges should currently reside and talk to him. He will inform you that you can sneak up into the Institute using the pipes that cool down the reactor and he will give you a code needed for opening the passage.

Getting into the Institute 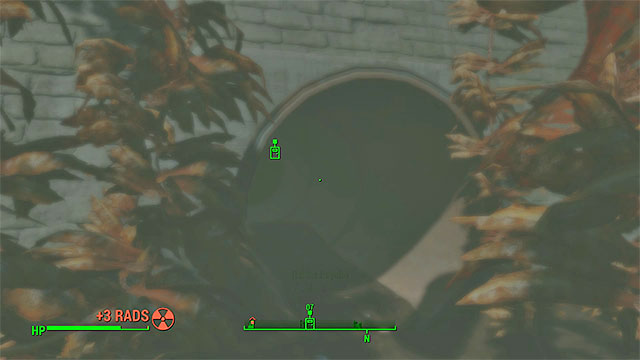 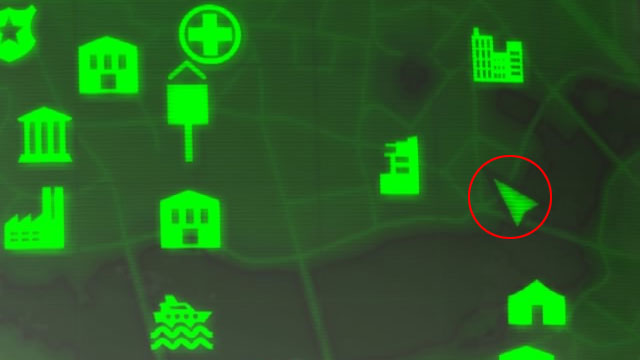 Open the world map and first move to C.I.T. Ruins underneath which the Institute is located. Ignore the building on the surface and set this quest as active. This will lead you to the pipe at the river. The location of the pipe is shown on the above pictures. Dive in and swim through the first tunnel that will lead you to a separate location.

Important - From now until you reach the Institute you will have to deal with radiation. It will be small, so you don't have to use power armor or hazmat suit. It should be enough if you use Rad-X (try to use it regularly) and RadAway (use it only when radiation level in your body will reach a high point). 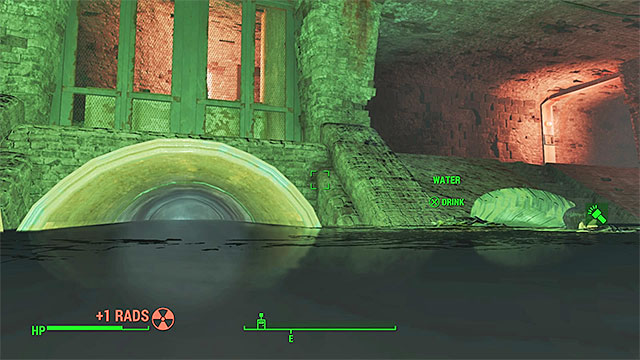 Leave the water after you reach the underground location and walk towards the keyboard in one of the walls. Interact with it and enter the code you received from Sturges. Now you can jump back to the water and use the newly unlocked tunnel shown on the picture (the tunnel is under the locked room). 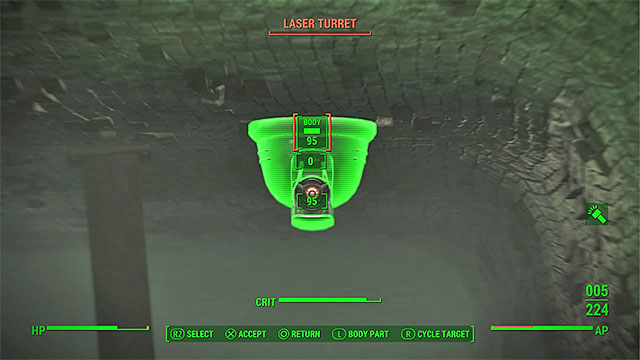 The turrets are quite a threat

Continue the pretty linear journey through the sewers. In addition to the radiation, you will face few other obstacles. Most of all, regularly destroy all the turrets on your way, especially the laser ones that deal more damage. It is worth mentioning that during the trip you can find terminals. Hacking into them will allow you to deactivate some nearby turrets. In addition to that, eliminate mole rats, ghouls (you will face at least one elite "glowing" type) and synths. 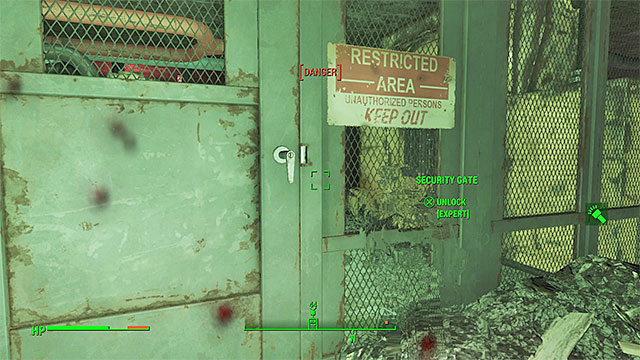 You can walk ahead, for example by opening the closed door

Further in the sewers you will be able to pick from three different paths to the current destination - you can hack into the terminal, use bobby pin to open the door that are slightly further or walk around and participate in slightly more battles. You must reach a new pipe. Walking through the partially flooded pipe will allow you to reach the Institute. 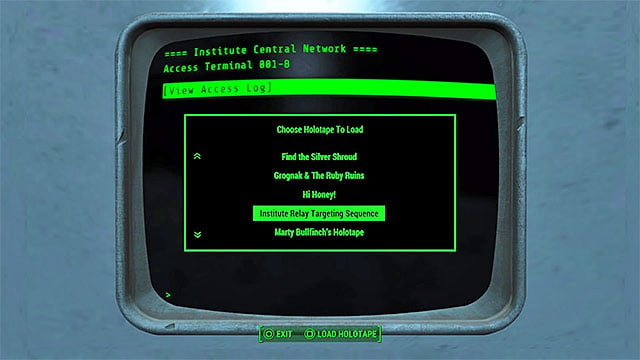 Remain in the room in which you found yourself after walking through the sewers. Interact with the computer terminal you find here. Press the load holotape key/button and select the Institute Relay Targeting Sequence from the list. This will activate the transmitter and allow a group of Minutemen to reach this place. Talk to Preston Garvey before you go ahead - he will give you Fusion Pulse Charge.

Reaching the reactor in the Institute 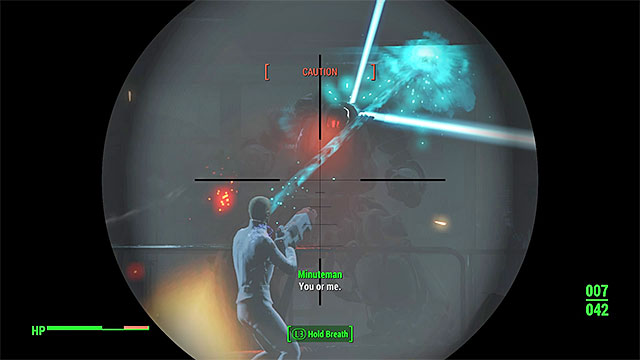 The large robot will get rid of some synths for you, but in the end you will have to defeat it yourself

Now you will have a long journey ahead of you through Institute's rooms. You will be accompanied by Minutemen and in each new location you will reach you will have to participate in a larger battle. Each time try to start by destroying or deactivating security turrets and only after that focus on eliminating the synths that are attacking you. One of the computer terminals you find will also allow you to activate a prototype Sentry Bot which can make eliminating the synth enemies faster. 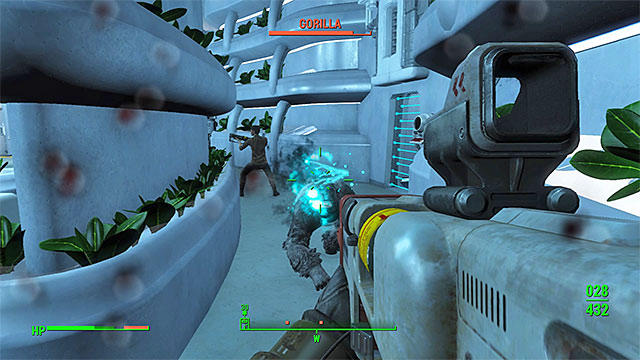 Gorillas are resistant and they deal quite some damage

Keep walking ahead until you reach the hatch in the ground. You must open it and jump inside. Be ready for new battles. During the battle in the Bioscience section in addition to synths and turrets you will have to kill two synthetic gorillas. They are very resistant, so use a good weapon and don't let them get close to your character. In the main room of the Institute you will find at least one elite synth on which it is a good idea to use rocket launcher or other similarly powerful weapon. Once the battle is over, listen to the information from Sturges about some unpredicted complications.

Using the terminal to deactivate the barrier 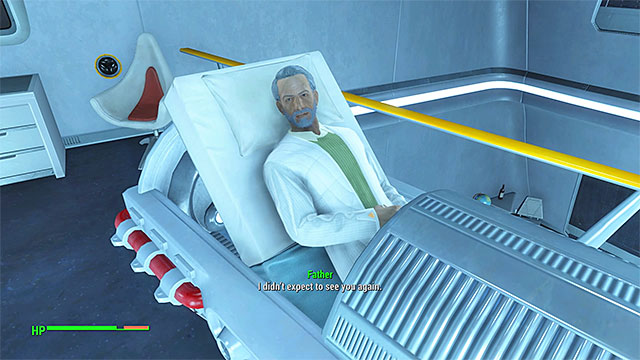 You can speak with the Father for the last time

Remain in the room where the last battle took place. In its central part there is a large elevator which you must enter. Activate the elevator. Use another elevator slightly further and it will lead you to the previously visited Father's quarter. If you want to, you can speak with the dying Father lying on the bed. At this point the game will allow you to use unique dialogue options related to high Charisma. If you manage to complete the persuasion attempt, the Father will give you a code for deactivating some of the synths. 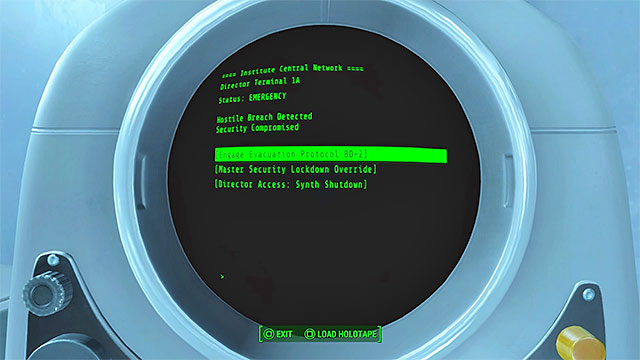 It is best to select options from the menu in order 1, 3 and 2

No matter how you behaved towards the Father, walk to the computer terminal pointed by the game. Now do three things: 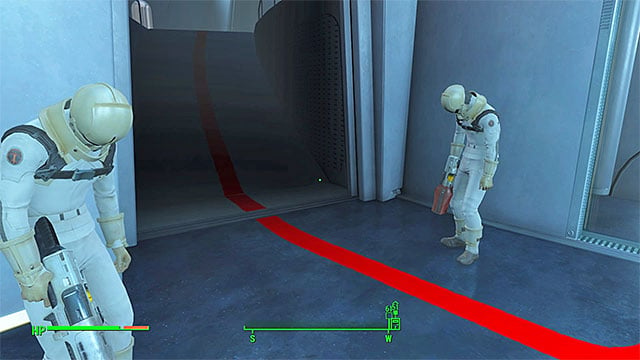 Entering the code will deactivate some synths

You can move on. If you given the command of deactivating the synths, some of them will be inactive now. However, this will not deactivate all of them, you will quickly find new enemies that will appear in large groups. Use the passage to the Institute Advanced Systems section and then to Institute Reactor. Walk through long, narrow tunnel in which on the left wall three laser turrets will activate (destroy them quickly). Soon you will reach the room with the reactor.

Placing the fusion impulse charge in the reactor 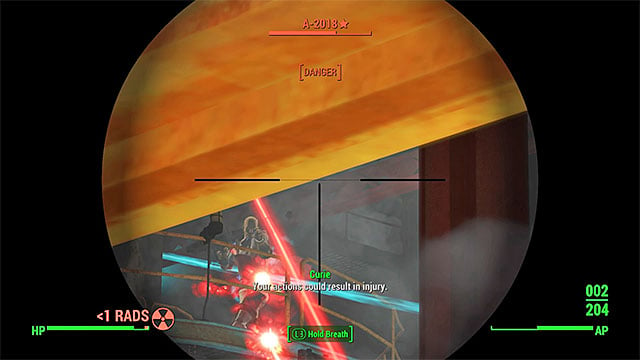 Watch out for elite synths in the reactor chamber

Don't take interest in the reactor yet, as in the new room you will have one last large battle of this quest to win. During this fight, two elite synths should join the regular ones. Try to get rid of them quickly and watch out so that you won't be killed by their strong attacks. Don't use weapons with area of effect (such as Fat Man) as the small size of the room and the presence of allies might lead to unwanted complications. 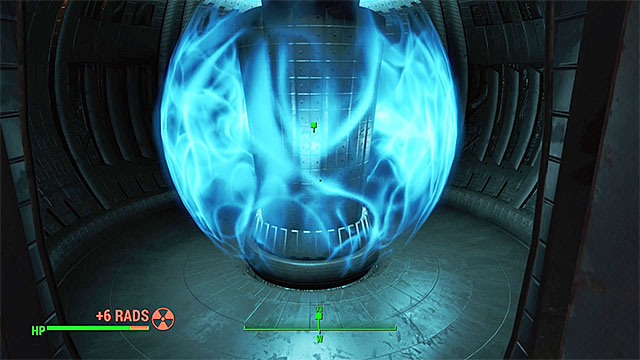 Enter the reactor room only for a short moment

Once you win the battle, consider putting the Hazmat suit on or taking Rad-X. Walk up the balconies, open the reactor door, enter inside and quickly plant the fusion impulse charge. Leave the small room after you complete that action. 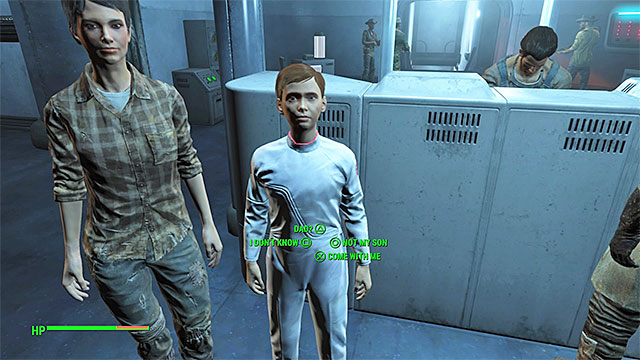 You should take Shaun with you

Talk to Preston Garvey and wait until you are teleported to a new room. There you will find the previously met synthetic Shaun. You can decide to leave the synth here or (a better idea) take him with you (after completing this quest he will reside in the Castle or in the Sanctuary). Finally, talk to Sturges. Now you can position yourself on the platform and wait to be "transported". 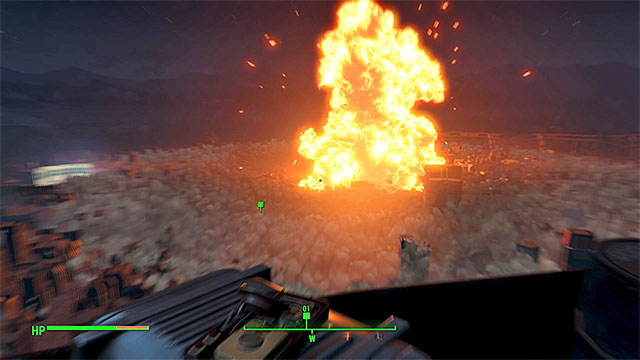 The explosion will destroy Institute headquarters

The target of the teleportation is Mass Fusion building. There is only one action to be done there - press and hold the detonator button. This will blow up the Institute headquarters. Now you will see the ending movie, but after watching it and listening to the conversation with Preston you can still explore the wastelands and complete quests (including completely new ones for the Minutemen).