How to unlock: You must refuse Father's proposition during the Institutionalized quest and become the enemy of the Institute in any way you want.

This quest is very short and during it you must simply participate in a single talk. Successfully unlocking it might be much more troublesome. The easiest way to do it is if during the Institutionalized main quest you don't agree to start cooperating with the Institute when the Father will ask you to. In that case you will be asked to leave the Institute and this mission will activate after you use the signal interceptor again.

This quest can be also added to the journal despite accepting Father's proposition during the Institutionalized quest. For that to happen, you must worsen your relations with the Institute in the game so much that you become the enemy of that faction. It might happen after making wrong decisions in one of Institute's quests or after you murder one of the scientists working for that faction (executions of synths met in the game world do not count). 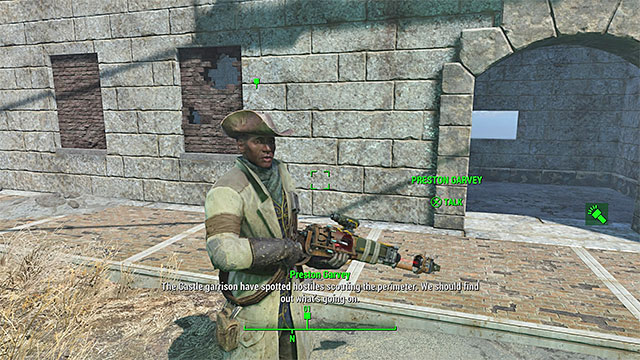 Garvey will warn you about a planned Institute's attack

No matter how you unlocked the quest, go meet with Preston Garvey whom you will find in the Castle (if he isn't an active party member). Listen to the short conversation with him. Preston can tell you that Minutemen aren't strong enough yet. In that case, you must complete more optional quests for this faction until you have at least eight settlements (they don't have to have inhabitants). If you helped Minutemen enough, you will learn that Institute's forces are gathering around the Castle and that they are planning an attack. Another Minutemen quest will start.