How to unlock: The quest unlocks automatically after you enter the Institute (M5,6) for the first time.

Meeting with the Father 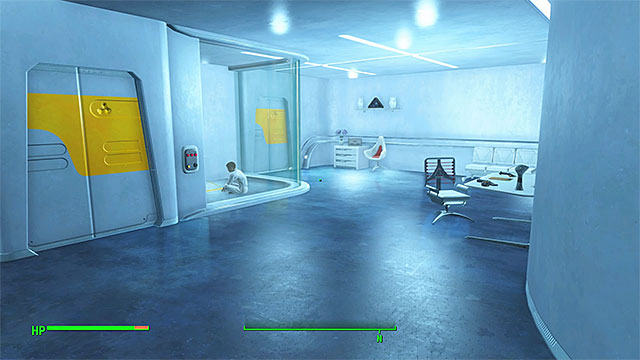 Talk to Shaun and then to the Father

The quest will not appear in your journal after completing The Molecular Level quest. However, it is not a problem since after using the teleport and appearing in the Institute you must only make few steps ahead for it to trigger. The Father will contact you through the intercom and will want to meet with you. Start a lineal walk, use two elevators on your way - first larger and then smaller one. You must reach the room where behind a glass wall you will see Shaun. Try talking with him. At the end of the meeting the Father will enter the room. During the conversation you will learn his true identity.

Option A - Refusing the Father and leaving the Institute 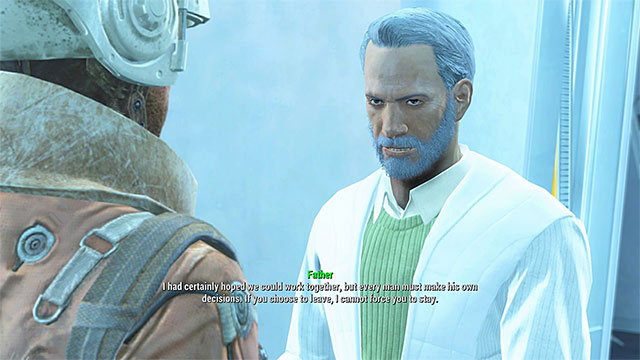 If you will refuse the Father, you won't be able to stay any longer in the Institute

During the meeting with Father you can act in two main ways. If you don't want to have anything in common with the Institute, you can select negative answers, first by negating his identity and then refusing to work together. It won't make you Institute's most wanted enemy, but later in the game you won't be able to cooperate with this faction. Father will allow you to return to the room with the teleport where you will be able to leave the Institute and end this quest.

Option B - Accepting Father's proposition and remaining in the Institute 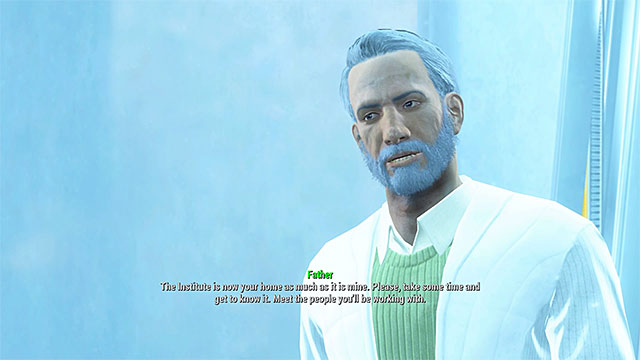 You can start cooperating with the Institute

If during the conversation with Father you will believe in his version of the events, you will be able to continue the quest and start a closer cooperation with the Institute. It is worth mentioning that at this point you aren't making any crucial decisions. You don't need to worry that your relations with other factions will worsen, that will happen only after you start further Institute quests. You can stop the cooperation with Institute at any point you want. 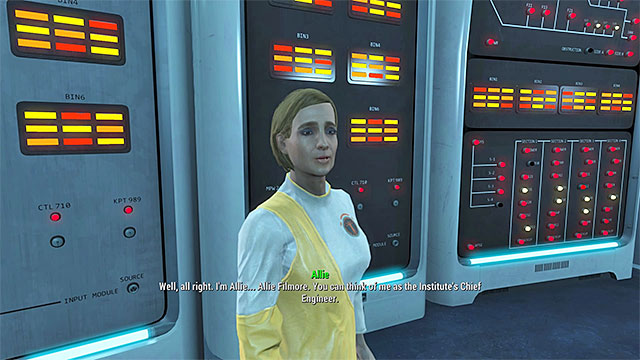 The Father will ask you to meet with leaders of all Institute divisions. It will be five different people to which it is best to go after activating this quest in the journal (in that case the markers will lead you to them). You must talk with each of them - the conversation will be short or long, filled with asking them additional questions. The division leaders are: 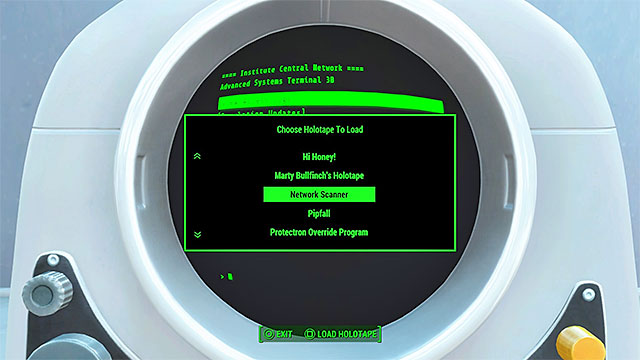 This objective can be deceiving as the game will not mark any computer terminal on the map. It's because you can interact with any terminal in the Institute. Don't pick any option from the menu after loading the main screen. Instead of that, press the load holotape key/button. Select the Network Scanner tape from the list (the screen above) and confirm that you want to start scanning the net (Initiate network scan). This is the end of the quest. Now you can remain in the Institute and start first quests for this faction (including the Synth Retention quest) or leave the facility using quick travel.

Important - Walkthrough for quests related to Institute faction can be found in a separate chapter of this guide. This main quest was the last "general" one. All further main quests are related only to the faction you have selected (Minutemen, Brotherhood of Steel, Railroad, Institute).