After you improve your relations with one of the three main factions, you will meet with its expert in new technologies. In the Brotherhood of Steel it is Proctor Ingram, in Railroad faction it's Tinker Tom and in Minutemen it is Sturges. The expert will give you information about the steps required for building the first part of the teleport. Later in the quest you will have to return to him for further instructions. The teleport can be built in the location suggested by the expert or in any of the unlocked settlements (for example, in Sanctuary). All steps required for building the signal interceptor are described below. 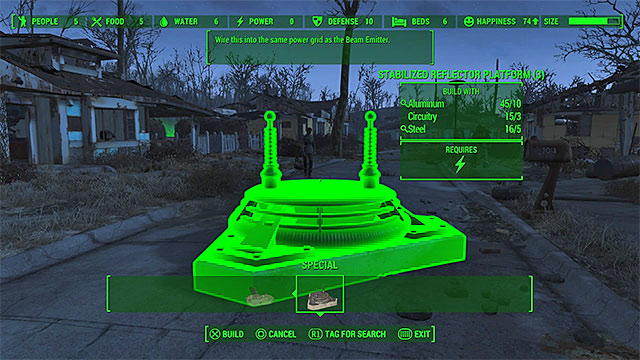 An example place where you can construct the reflector platform

Go to the location where you intend to construct the interceptor and open the workshop window. Select the Special tab and then the Stabilized Reflector Platform. In order to build the platform you will need very common materials. If somehow you don't have enough of them, then press the button and they will be marked with a magnifier icon. From now on the icon will appear whenever you find the material you need or an item which will give it to you after disassembling.

Once the platform is build, talk again to the expert of the faction you have selected. You will learn that the next parts of the signal interceptor are console, relay dish and beam emitter. You can construct the objects in any order you want. 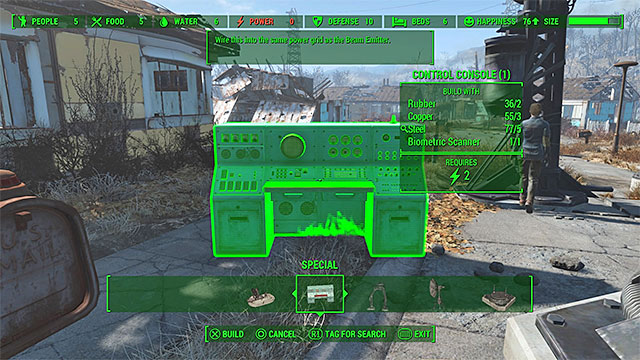 The Control Console has one rare material needed for building it - the Biometric Scanner. In order to find it, you can follow the suggestion (optional quest objective) and go to one of the medical facilities in the game world. However, it isn't mandatory, as biometric scanners can be frequently found near many destroyed security turrets. You must only make sure that it will be a higher level turret (for example, fifth level), as only such turrets are "dropping" rare items. 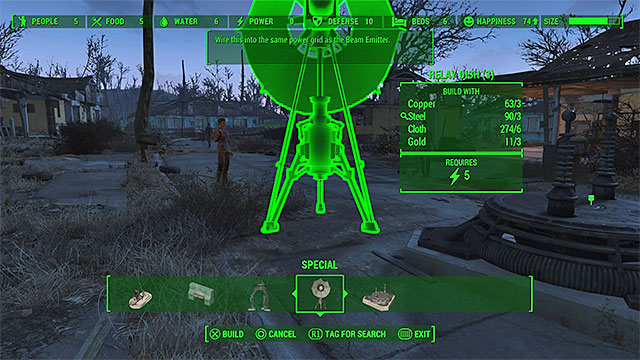 The Relay Dish can be placed much easier, as rather common materials are used for building it. Having the Sensor Module isn't mandatory for constructing it. If despite that you want to obtain that item, then you can search for it for example in USAF Satellite Station Olivia located in the northern part of the map. 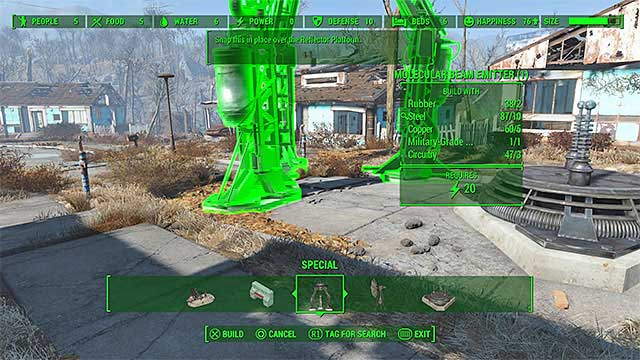 The Beam Emitter, similarly as the console, requires you to have one rare item - Military-Grade Circuit Board. You can search for that item in one of the military facilities on the world map, but similarly to the biometric scanners it can be also found at many destroyed security turrets. Once you gather all the materials, build the beam emitter precisely above the previously created reflector platform.

Powering up the signal interceptor 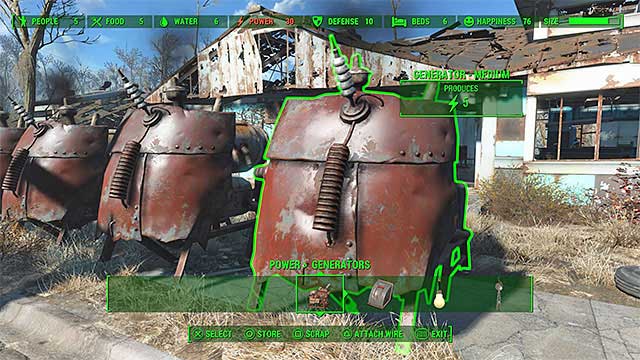 Now you have all the parts of the signal interceptor constructed and you must power it up. The device requires 27 units of energy to work. If you have the Science! Perk, you can build two large generators, but they will require some rare Nuclear Materials.

If you don't have that perk or the required materials, then create six medium generators. Place the additional generators in a straight line, near to each other and to the interceptor. An example line of the generators is shown on the above picture. 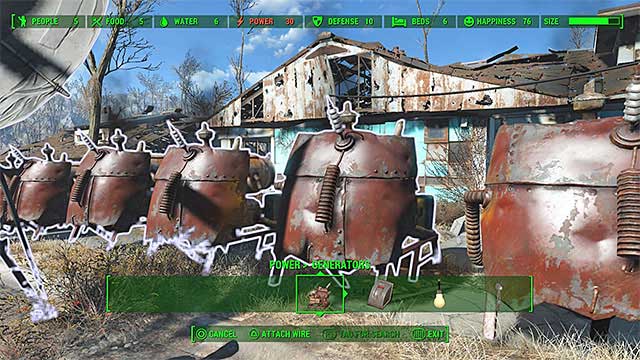 Now you must connect all the objects (the generators and interceptor's parts) with cables. Start with connecting the generators - position yourself next to each of them (you must have the workshop window open) and press the key/button responsible for connecting the cables. After a cable appear on the screen, move towards the neighbor generator and finalize the connection (an example is shown on the picture above). 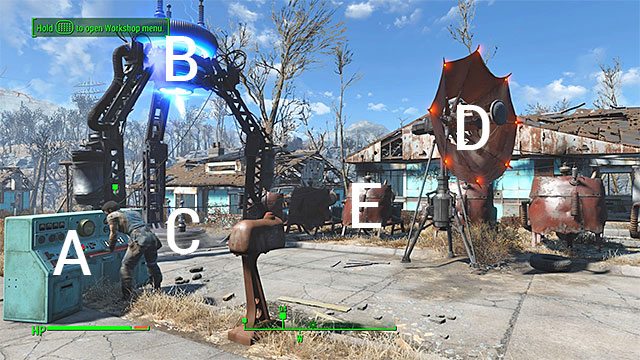 Once you connect the generators to each other, you must attach the cables to the console, to the dish and to the beam emitter. You can connect them in any combination you want. Every part of the interceptor doesn't need to be connected directly to a generator. In the end, all teleport parts (except the platform) must be connected to the network.

An example finished signal interceptor is shown on the picture - A on the image is the console, B is the beam emitter, C is the reflector platform that is precisely under the beam emitter, D is the relay dish and E is the row of generators attached to objects A, B and D using cables.

Important - If the game doesn't allow you to attach a cable to one of the interceptor parts, it might mean that it is too far away. Move it closer to generators and/or other teleport fragments. 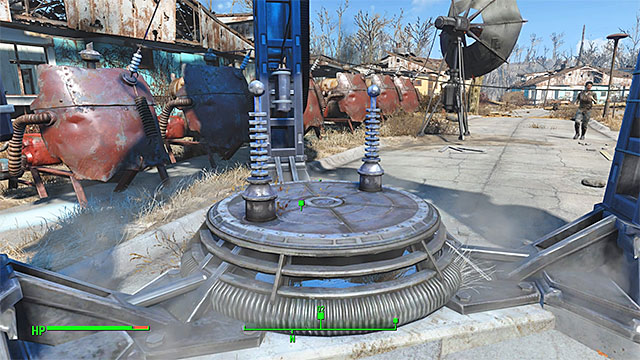 Position yourself on the platform of the interceptor

The final part of the quest is very simple. Speak to the person who was helping you in building the signal interceptor and position yourself on the reflector platform. Before you do it, you can of course save the game. You will be teleported to the headquarters of the Institute and the quest will end.