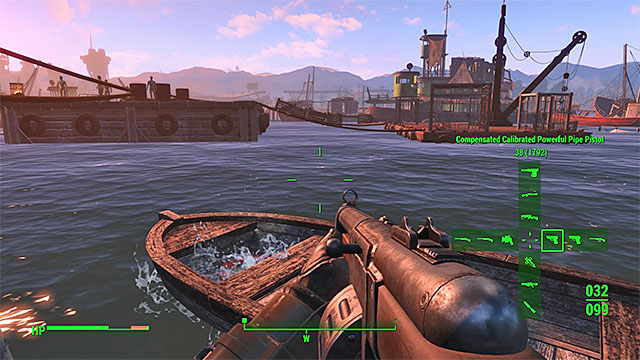 You can place weapons, healing items and explosives in the drop-down menu

Equipment management in Fallout 4 isn't hard. The inventory is build around the Pip-Boy device which you obtain at the beginning of the game. It is very well organized and various items are divided into various categories (weapons, clothes, boosters, modifications etc.). The fact that you can move selected equipment items to a drop-down menu of favorite items is very useful. It is a great help during the game since thanks to that you can prepare a set of useful items to use without having to search through the inventory every time. Try to place as many of frequently used weapons in the drop-down menu as possible. Make sure that it will be weapons using different ammunition type, so that you won't use all your supplies quickly and you won't be forced to quickly change the gun you're using or overpay for ammunition at merchants. In addition to weapons, you should also place stimpacks and at least one type of grenades and mines in the quick use menu. 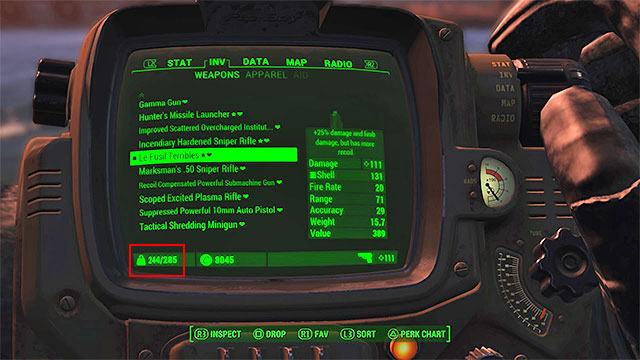 One of the most important factors related to equipment management is capacity. Exceeding the limit will make it impossible for you to run and in some cases, even to move. The current wage of items you have is shown after you open the inventory, the pictures above show where exactly is it.

The default capacity limit can be influenced even before starting the main game. It is related to the Strength factor - the more points you invest into development of that parameter, the higher will be the capacity limit. During the game you can still develop the Strength parameter, but there are also other ways to increase the capacity. Most of all, you can unlock next levels of Strong Back and Lone Wanderer perks. In the second case, decide to buy the perk only if you plan to travel through the game world with no companions. 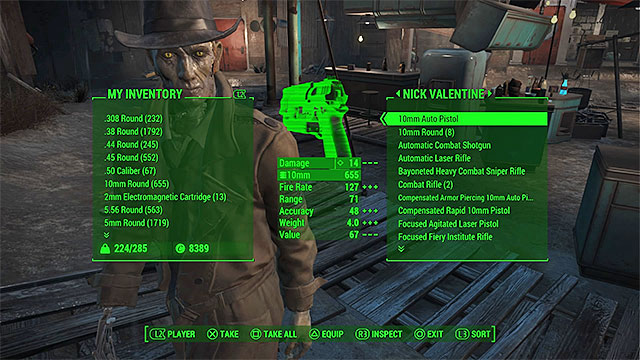 The companions mentioned above are a very good "solution" to the capacity limit problem. You can give some of your items to them and thus reduce the weight of items of your own character. Given items can be taken back freely and with no trouble by initiating a conversation and saying that you want to look into their inventory. The last method of dealing with heavy items is placing them in containers until they become useful. However, do it only in one of your settlements (for example, in Sanctuary), thanks to that you won't have to worry about losing a valuable item.

Important - Power armors aren't included in the capacity limit since the main character doesn't place them in the inventory but is walking in them. It is a great advantage, but on other hand, you must remember to place a power armor that you currently don't need in a place where later you will easily find it (preferably in Sanctuary or other settlement).

Important - The items you have can be disassembled to parts and upgraded with a special modification. This topic is described thoroughly in the chapter focusing on crafting. 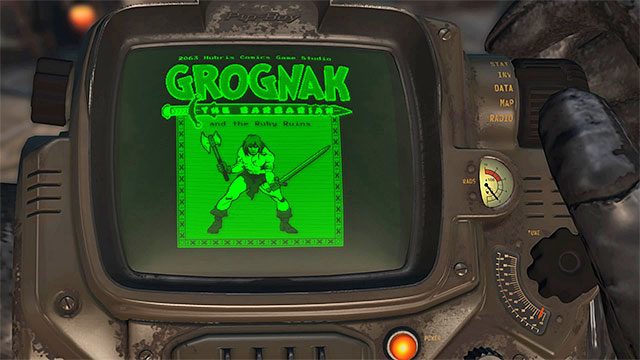 Minigames are one of many attractions of Pip-Boy

Pip-Boy isn't used only for managing the inventory. The device has few other applications. The most important are:

Additionally, the Pip-Boy can be used for listening to holotapes and in recreational purposes. Every time you find a magazine from the RobCo Fun category (full list of them is available in our world atlas guide), you can play a minigame related to it (find the magazine in the inventory and select it to start the game).