Way to unlock: Talk to the robot near USS Constitution (M5,2) . 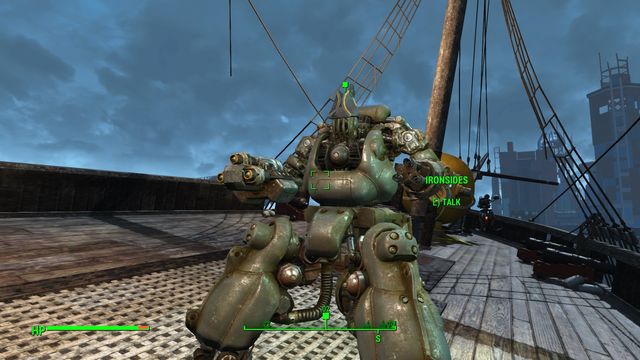 As soon as you approach USS Constitution, a robot will fly up to you and he starts a conversation. During the conversation, he tells you to meet the captain. Go to the destroyed building, climb upstairs and find the hatch into the ship. As soon as you are inside, do not attack the robots - they are not hostile. Climb to the upper levels and remember not to steal anything. At the third floor, you meet the first mate who stops you. Fortunately, after a while, he lets you proceed. Climb to the ship's upper deck where you meet the captain, who turns out to be a huge robot. He asks a favor of you. With sufficiently high Charisma, you can demand a higher pay.

As soon as you finish your conversation with the captain, a big group of scavengers launch their attack. Your task is to fight them back. You can do that by either eliminating them, one after another, or use cannons that you first need to repair, in a series of minigames.

Talk to the Bosun

One of objectives that appear after the attack starts is talking to the Bosun. You find him on the top deck, right by the stairs. Talk to him and he task you with several more objectives. 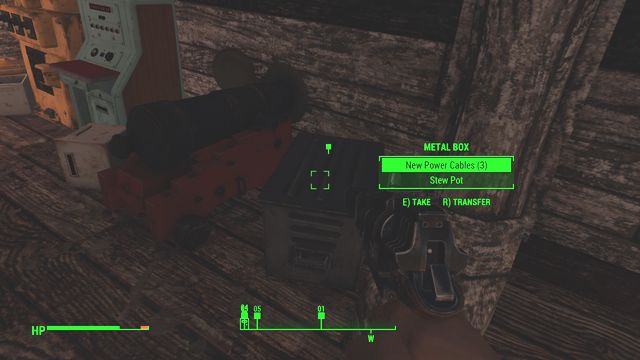 With at least 3 intelligence points, collecting the cables is not necessary.

The first task from the Bosun is to fix power cables. You find them in the box right behind the robot. You simply need to collect them. 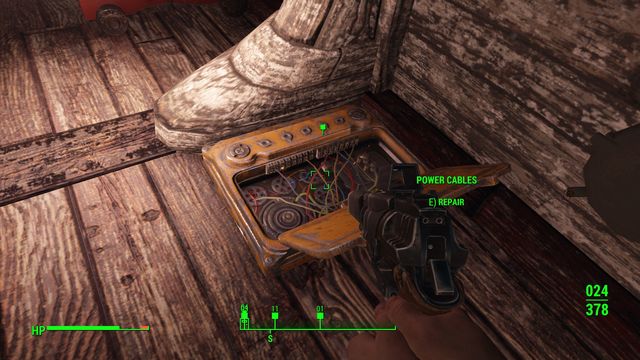 To restore the ship's systems, you need to find three boxes with cables and fix the damaged bundles. If you followed the previous objective and collected the cables, you now need to select the appropriate option in the menu. To fix the cables yourself, you need to have, at least, 3 Intelligence. Finding the boxes themselves should not be too difficult, all of them are in one place and additionally, they are marked with green dots.

As soon as you fix all three cable boxes, go to the top level of the ship and report to the Bosun.

After the conversation with the Bosun, you will have to restore power in the ship. There are two ways in which you can do this. If your Intelligence is 5 or higher, you simply need to approach the box and fix it. 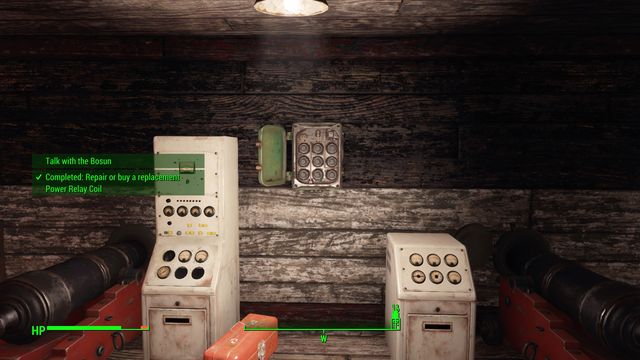 If your intelligence is below 5, you need to buy replacements. Climb to the main deck and go to one of its ends, where there is the life boat. As soon as you climb onto it, it lowers. Now you need to either go, or fast-travel, to Bunker Hill, a nearby trading settlement. There, find Deb and buy the relay coil. Return to USS Constitution. Go to the box near the Bosun and fix it.

After you restore power, talk to Bosun again. 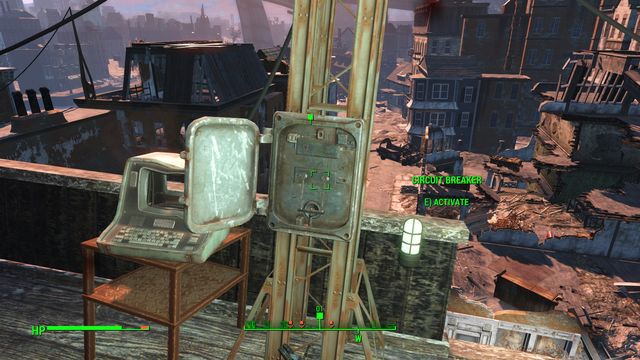 After you have completed all of the task assigned to you by the Bosun, i.e. after you fix the cables and restore power, go to the main deck and approach the ship's side that is being attacked by scavengers. There, you find a mast with a switch on it. Activate the switch to fire cannons that weaken the enemy forces.

After you drive scavengers away, you need to talk to the navigator. You find him inside the ship. He flies away to find the parts that have been stolen from the ship. 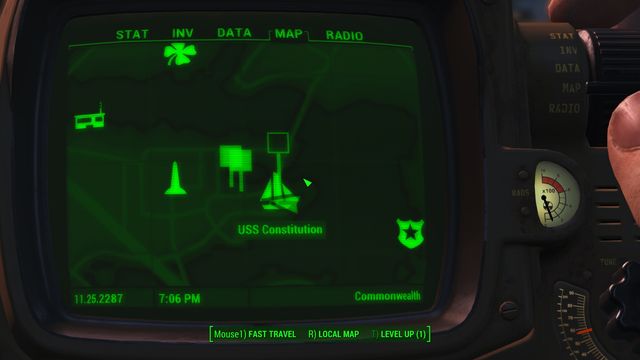 After the conversation with the navigator, leave the ship for the ruins to the East. They are right behind the destroyed ship and this is where the scavengers have been coming from, during the attack. Along your path, remember to search corpses of the bandits that you defeated while still aboard the ship.

In front of the small house, among ruins, you find Mandy Stiles. During the conversation, you will have to pick the side you are on: robots or scavengers. You can say that you help scavengers, because you take the final decision later on, anyway. You receive one of the parts from Mandy, and you find the other one in the cupboard at her home. 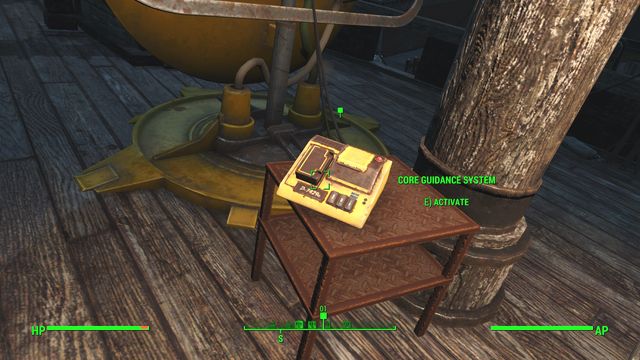 With both parts, go back to the ship. On the deck, next to the big antenna, you find a small box. Fix it.

As soon as you fix the system, talk to the navigator. He should be right next to you. If he is not there, check under the deck. From him, you receive 250 caps. He asks you to repair one more element - the radar transmitter. 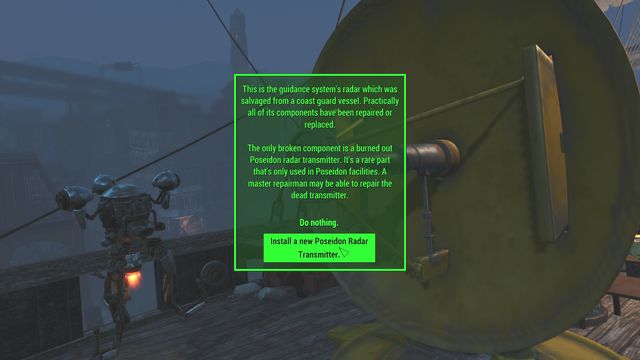 You can repair the antenna without any parts, as long as your Intelligence level is 9 or above. If not, you need to find a replacement.

Go Northwards, to location Poseidon Energy Turbine #18-F. Enter the building and find the box that you are looking or. In the building, there only are weak insects. 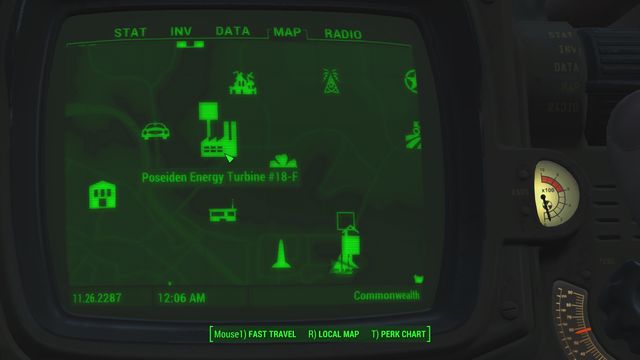 When you find the part, you need to return to USS Constitution. Approach the antenna and replace the damaged part. After the repair, talk to the navigator. You receive 250 caps.

Now, you need to talk to the captain. During the conversation, you will be able to voice your support for one of the factions again - the robots or the scavengers. Ironsides wants you to repair one more thing. 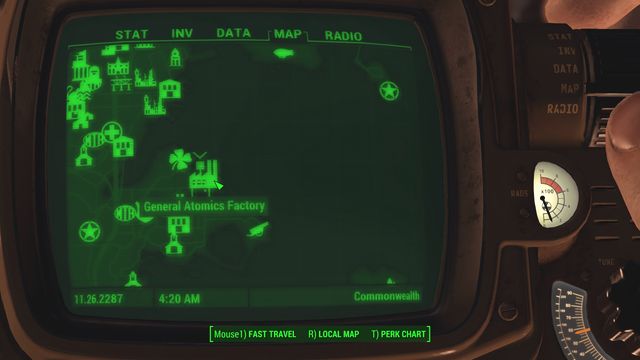 You now need to go to General Atomics Factory, quite far away Southwards, and enter. The building is being guarded by quite a few Mr. Handy robots. However, they should not pose too much threat. You should be most careful while dealing with Colonel Handy, which is armed with a quite powerful machine gun. The part you are looking for is in the room on the upper floor, in the crate.

With the part in your hand, you can finally decide which side you are on.

If you decided to help the scavengers, talk to Mandy. Return the part to her and in return, she gives it back to you with a modification that damages the engine. 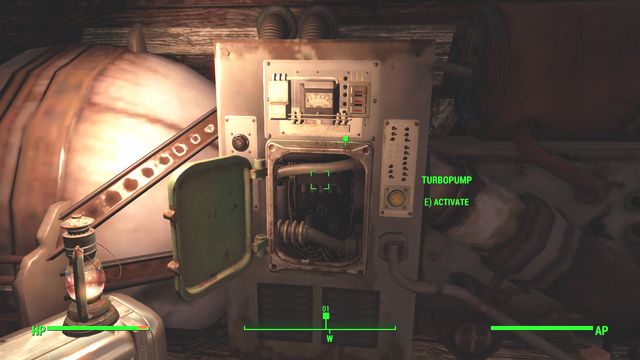 If you decide to side with the robots, go to USS Constitution immediately. Go to the third (top) level and enter the captain's cabin. You already have the key, because you have received it from Ironsides. The box that you need to place the part in is to the left.

After you fix the turbopump, leave the deck and talk to Ironsides. After the conversation ends, the scavengers launch their attack and you need to fight them back. You will have to defeat a dozen-or-so opponents. Remember to use board cannons. As soon as toy defeat them all, climb under the deck, where there are more scavengers, including a legendary one. You will be helped by the robots stationed there. 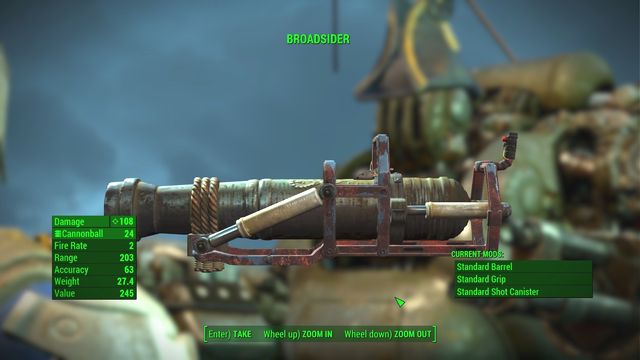 After you defeat all of the scavengers, climb up to the deck and talk to Ironsides. He gives you a very good weapon that resembles a board turret. You will be asked to do one more favor. 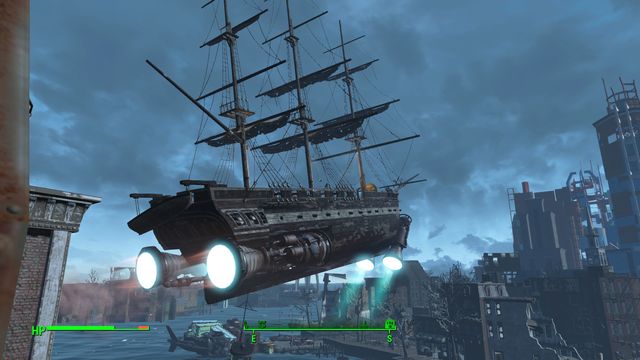 To start the ship's engines, you need to supply sufficient amount of energy. Go to the building in front of the ship (it is on the left, when you look from the side of the ship). Climb to the top level and activate the switch in the box. As a result, the ship takes of and...hits a skyscraper after a while. Still, your quest will be completed.

If you decided to side with scavengers, go to Mandy, give her the turbopump and receive the modified version. You now need to go to the ship. Climb to the third level and enter the captain's cabin. You can do this, because you already received the key from him. You can place the Turbopump in the installation on the left.

After you fit the turbopump in, go to the deck and talk to Ironsides. You receive 500 caps from him. He tells you to start the engines. Return to Mandy. She is in the small building to the left (as viewed from the side of the ship). 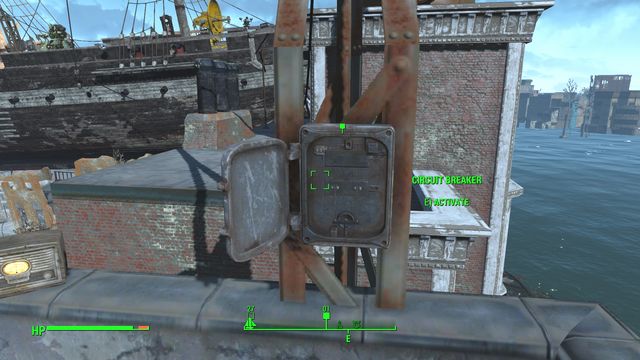 After you talk to her, climb to the building's rooftop. There, you notice a small box that you need to use. After a short countdown, the ship's engines explode.

After you destroy the ship, you need to defeat all of the robots, including Ironsides. It is best to do this using the sniper rifle, at a safe distance. You will be helped by several scavengers, so this should not be that difficult.

As soon as you defeat Ironsides, talk to Mandy. Unfortunately, it turns out that you have been betrayed by scavengers and instead of sharing their loot with you, they decided to kill you. You need to kill them all. After you do, the quest will be completed and you are up for quite a time of looting scavengers, robots and the ship itself.