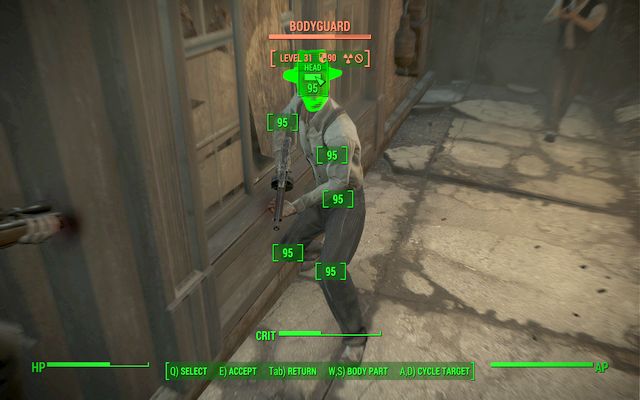 V.A.T.S is a special system that allows you to aim. Pressing the button which activates this mode will greatly slow the time and allow you to aim at any part of enemy body after selecting the attack sequence. The length of the sequence (how many shots can be fired during single activation of the system) depends on the weapon you use, optionally the necessity to reload and most of all the number of action points (maximum/available). Each sequence can be freely canceled, for example when the enemy managed to hide and you are sure you won't hit him. The greatest advantage of the system is that a sequence of planned actions is performed by your character much faster than in real time. What's worth mentioning is that the system is not limited only to gunfire.

In the aiming view, above each body part there is a chance of hitting shown. It changed dynamically while the enemy is moving. Perception parameter greatly improves the hitting probability. Additional abilities supporting V.A.T.S. are available as well, like "Mysterious Stranger" which gives you a chance that during the action a mysterious stranger will appear and deal additional critical damage to the opponent.

The critical hit chance for V.A.T.S. is working slightly different than regularly - it is not random based. In the lower part of the screen you will see a critical damage bar. Each time you hit the enemy it increases. Once it is filled, you can press the activation button before shooting - the next shot will be a critical hit.