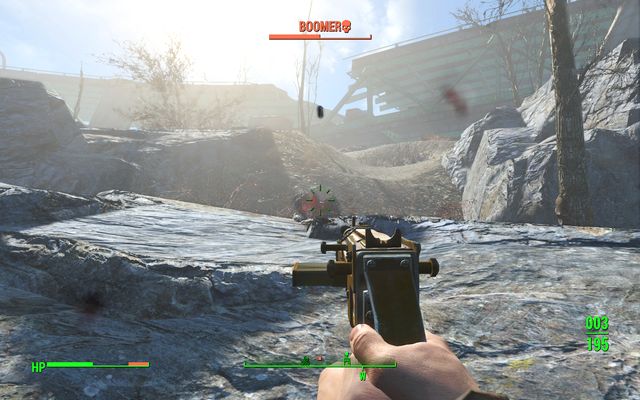 Despite appearances, the game isn't schematic and shooting enemy's head is not always the best choice. Yes, it does deal the most damage, but if the enemy has a headgear and his other body parts are uncovered, then it is definitely better to hit where you can give a clear shot. It's differently when it comes to monsters, which very frequently have an armor or shell. In that case, you must try hitting any body part that isn't covered with a natural shell.

Each of enemy's limbs can be wounded or even removed (robots and ghouls can keep on fighting without limbs - if they don't have hands, they will hit you with their head). Shooting legs is especially good when you have small number of health points - you will be able to safely hide or, if the enemy is melee fighting - you will be able to keep attacking him with any gunfire while slowly moving away from him. Shoots at hands have the advantage that an enemy with wounded hands is not able to hold his weapon. It should be your first target when you aren't shooting at the head while fighting an enemy with gunfire.

However, you must remember that each enemy has his weakness and advanced strategies can be used against them. For example, ghouls very easily lose their limbs and instead of shooting their head, it is always better to shot the legs (they can be not moving at all yet still be alive). Enemies with armors, like Mirelurks, very frequently are hiding inside the shells, so in that case it is better to shoot while crouching, use grenades or a strong penetrating weapon like shotgun. These strategies can be intuitively learned during the game and due to that it is not recommended to make a habit of using only one weapon type and one strategy to fight different enemies.