How to unlock: The quest gets unlocked after completing the main quest called Getting a Clue in the Diamond City Market (M6,1). 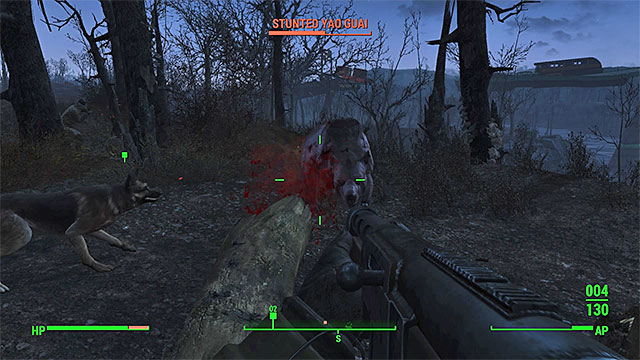 Eliminate the monsters you encounter

The quest begins at the Diamond City Market and you start by following Dogmeat all the time. Exit the city and follow the dog. Keep in mind that you will encounter various monsters on your way, including mirelurks, mole rats, bloatflies, feral dogs and ghouls. The most dangerous creatures are definitely yao guai bears. Keep distance at all cost and use a ranged weapon to get rid of them. 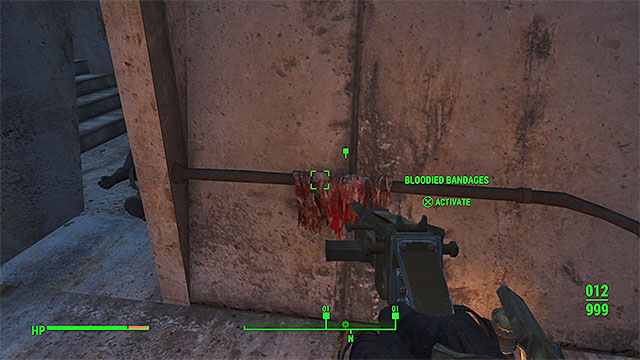 Dogmeat will lose track of Kellogg from time to time and you'll have to search the surroundings for a new item. You will stop at following locations: 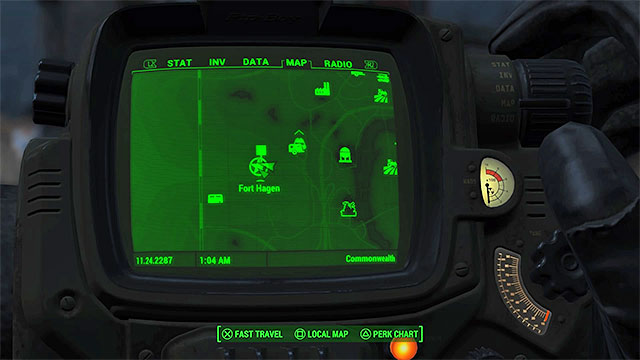 Your destination is Fort Hagen. It's located near the western edge of the map and it is shown in the screenshot above. Dogmeat will stop sniffing now and your new objective will be to find the way inside.

Find a way into Fort Hagen 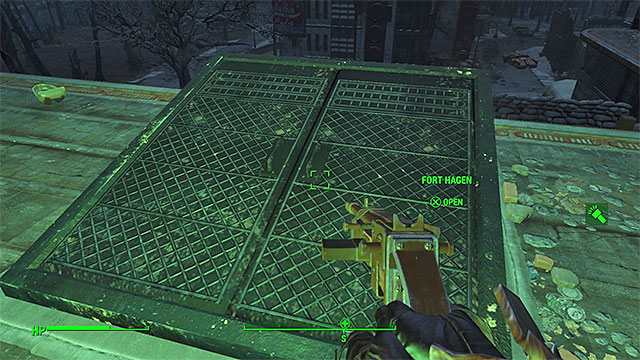 The hatch on the roof

Go to the back of Fort Hagen, because you'll find metal balconies leading to the roof there. Take your time using them - several turrets have been placed in the vicinity and destroying them is a wise move. When you clear the roof, look around and you'll see a large hatch - get inside the fort. 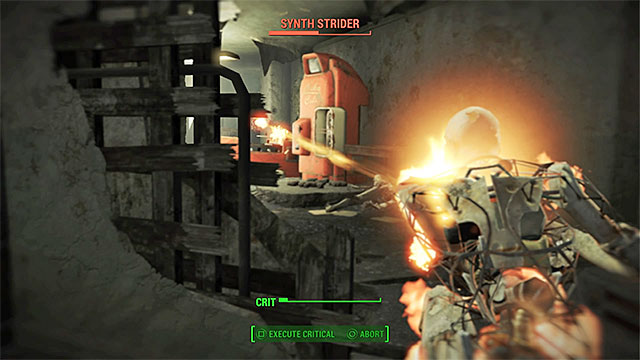 Laser muskets and rifles from the Institute are perfect against synths.

Start a long, linear walk through corridors and rooms of Fort Hagen. Hostile synths are inside the building - energy weapons similar to their own are the most effective against them. Moreover, look out for turrets (laser ones are the most dangerous) and occasional mines. If you want to make the whole process easier, hack a terminal, activate a protectron and set it to patrol the surroundings. 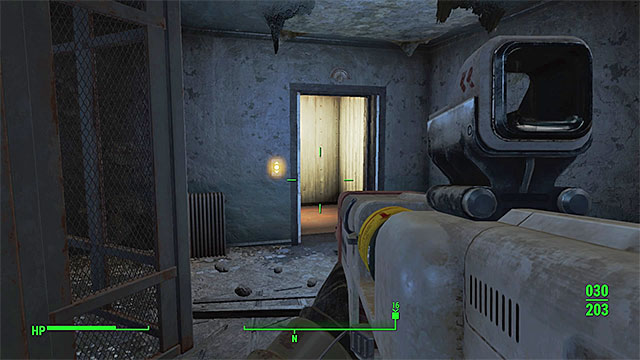 The elevator you have to use

In the beginning, you'll reach a door that's locked with a chain from the other side. What it means is that you have to take a longer way. When you do it (watch out for a laser turret on the ceiling), find an elevator, call it and descend to the lower floor. 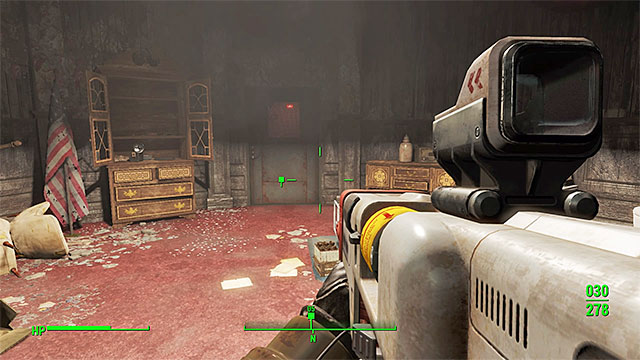 Right after you exit the elevator, you'll encounter more synths; defeating them might be more difficult because the fight takes place in a long, narrow corridor. Keep going forward and ignore Kellogg's messages, because he does not pose any threat yet. You'll soon reach a door leading to Fort Hagen Command Center. You will keep going along the linear path (consider breaking into the armory where you can get a Fat Man) and eliminate all dangers. Stop when you reach the room shown in the picture above. Save the game because a tough battle awaits you ahead. 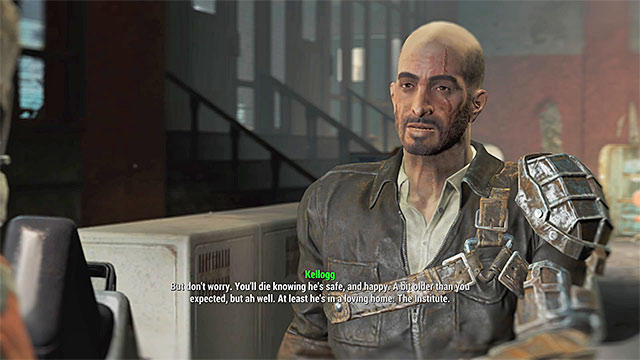 The encounter with Kellogg must end in a fight

Kellogg is currently in a large room nearby with a group of synths. You won't be attacked right away and you can approach him for a short conversation. Don't count on avoiding the fight, Kellogg will attack you as soon as you stop talking. 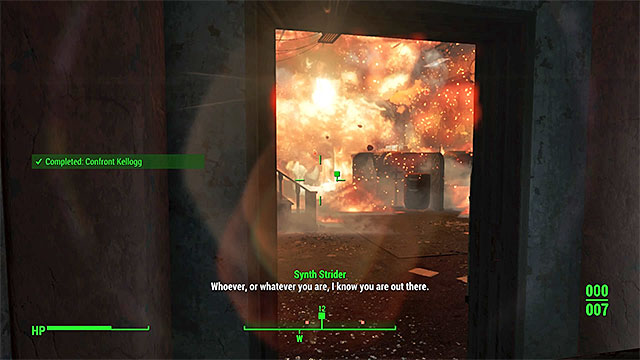 You can attack Kellogg without talking to him.

You won't learn anything while talking to Kellogg, so you can attack him right after you reach the room. It's a safer alternative if you have a Fat Man in your inventory, because a single attack with a mini nuke might kill Kellogg instantly. 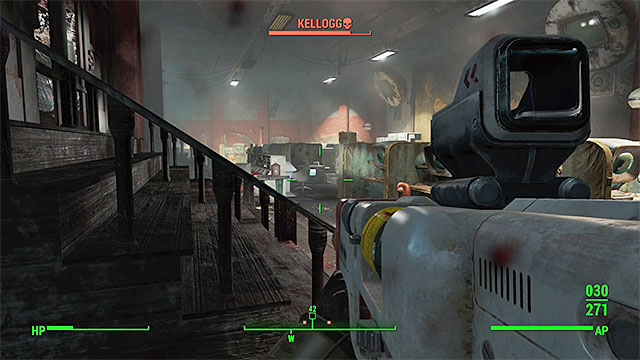 If you don't own any elite weapon or you insist on talking to Kellogg, focus all your attacks on him. Sooner or later, Kellogg will use camouflage that will make V.A.T.S-based attacks impossible. In that case, use a shotgun or other weapon that doesn't require precise aiming, consider using explosives as well. Don't let Kellogg heal himself and take care of your own health.

Leave Diamond City Market and head towards Goodneighbor located to the northeast. When you reach it, go to the Memory Den. Get inside, go to the back and find the stairs leading to the basement. You'll find Doctor Amari.

Sit in the memory lounger 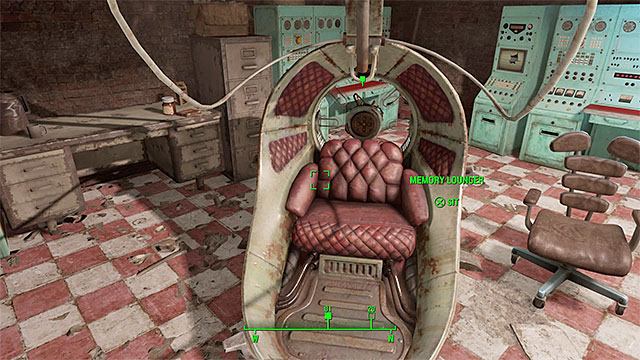 Talk to Doctor Amari about your situation and show her the implant you got from Kellogg's body. If Nick Valentine is your companion, he'll try watching Kellogg's memories first. The attempt will be unsuccessful and you'll have to watch them yourself. 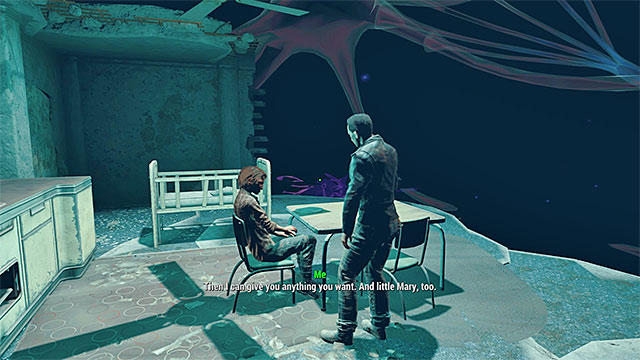 It's time for a linear "journey" through Kellogg's memories that's not very interactive. Use unusual paths to reach places where memories are going to be played. You don't have to do anything, just watch the scenes. 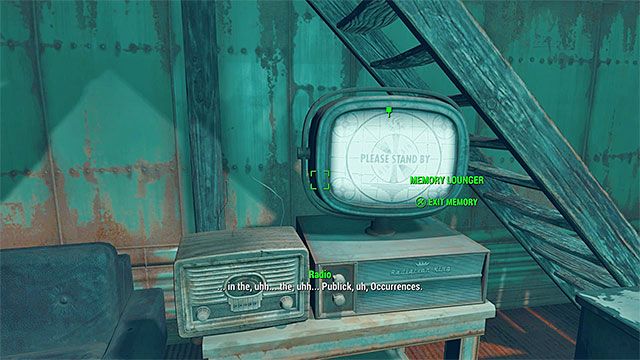 Watch all of the memories, including the one with Shaun. To return to the real world, use the Memory Lounger (TV). After leaving the chair, talk to Doctor Amari. You'll learn that you have to find Virgil. You'll take care of that in the next quest - The Glowing Sea.