Sneaking up is a special ability that allows you to move undetected. It is based on Agility points, especially the Sneak perk which gives you +20% to stealth. The mechanism is quite expanded: you must keep attention to the distance to the enemies, to noise and the amount of light. Many of enemy bases have special headlights that are automatically tracking enemies (which means you) and that make it impossible to sneak up. All security turrets also notice you faster than humans and monsters. As for the light - Pip-Boy's flashlight light you up as well, making it impossible to sneak up effectively.

Sneaking mode is activated with a single button that is also responsible for crouching. In this mode you automatically move slower and quieter. Also, a bar appears in the middle of the screen. It has few states: hidden; detected - you can't steal when it is active; caution when you are detected by enemy and danger when enemies had seen you and they start the attack. Each state can slowly change into previous one if you are well hidden and wait for some time.

Attacks performed while sneaking up have two positive traits. You have greater accuracy and you receive a damage bonus for surprise attack. By default, the bonus is 2x the number of damage dealt. With the Ninja perk (requires agility) the multiplier can be increased. 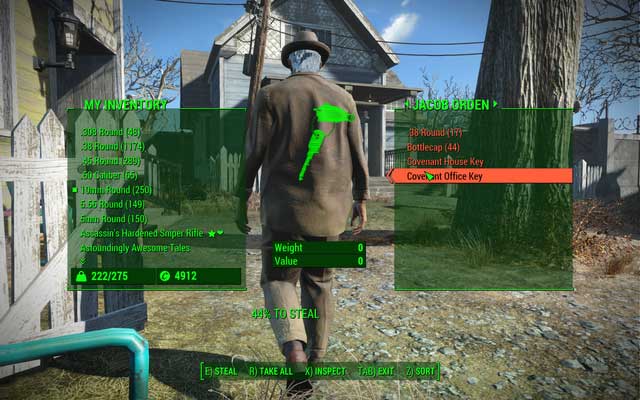 An example screen of checking someone's possession when stealing

Pickpocketing is related to sneaking up. Only in stealth mode you can use it. To do it, you must walk to any NPC. An option to steal will become available, you can activate it with action button. You must be invisible when attempting to steal, otherwise you can be attacked immediately. Simply checking the equipment of your target isn't considered as a bad behavior. Only when you will try to steal something, the game will consider it as robbery. Not every item can be stolen when having low Agility - aim at small items, such as keys and notes. At the bottom of the screen you can check your chances for a successful theft. The higher the agility, the greater the chance for success.

Stealing someone's belongings for your own profits is not the only trait of this skill. In case of enemies, you can steal their weapons or ammunition, making it impossible for them to fight (especially useful in case of mini-bosses).

Another profit of stealing is the possibility to add something to other people's inventory. It is especially useful to give them grenades or mines. Unsuspicious enemy can drag such bomb to a group of enemies and cause some damage while you remain undetected. This trick is worth using, especially since you receive a trophy/achievement for it: Prankster's Return.