How to unlock: Complete the Call to Arms quest and after returning to Cambridge Police Station (M5,1) agree to keep helping the Brotherhood of Steel. 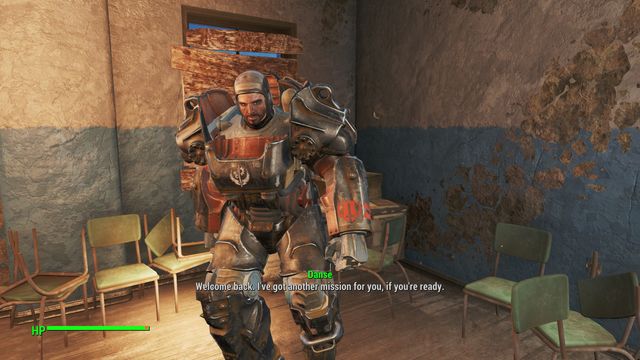 This mission has no story importance, it is only supposed to increase your reputation in the Brotherhood.

Your first objective is to return to the base of operations of the Brotherhood of Steel which is located in the Cambridge Police Station. Enter inside, listen to the dialogue between the members of the brotherhood and talk to Danse. During the conversation you will officially join the organization. You will also receive order to talk with Rhys and Haylen.

Talk with the two new friends, Haylen and Rhys. The woman will give you a quest about finding an artifact while the Knight Rhys will want you to clean the marked location on the map. Both quests are random generated.

Once you complete them, return to the questgivers, talk to them, then go to Danse. The quest will end.

Quest rewards: experience and some bottlecaps which you will receive for completing the two ordered quests.