Character development system used in Fallout 4 is called S.P.E.C.I.A.L. This shortcut's origin is in the first letters of the names of character parameters: S - Strength, P - Perception, etc.

Your first contact with S.P.E.C.I.A.L. system will occur during the conversation with the representative of the Vault-Tec Company, who will come to your door at the start of the game. You will be tasked with distributing 21 points to various parameters describing your personality and character. You have to choose from strength, perception, endurance, charisma, intelligence, agility and luck. Each of these parameters will determine how your character will behave and how others will react to you. Some choices will also influence the possibility to make certain choices during the game. For example, a charismatic character will be able to negotiate a better reward for completing the quest. Luckily, decisions you make can be later slightly changed by distributing the points you receive when gaining new experience levels. 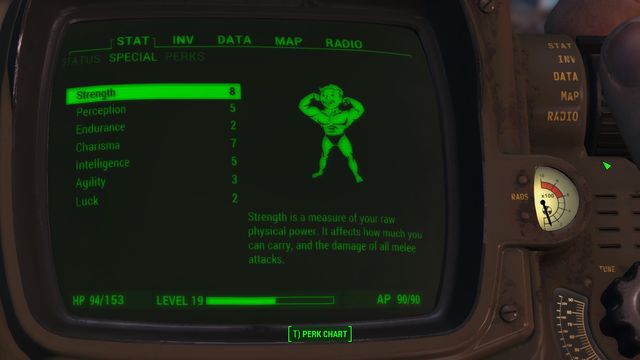 You can check your character's statistics in your Pip-Boy. This is also where you will distribute the points which you will receive after gaining new level.

You receive experience points by completing quests, killing enemies or even by opening closed chests. Thanks to experience, you gain new levels. With each new level you receive one ability point which you can spend in the "stat" tab in Pip-boy ("T" key). 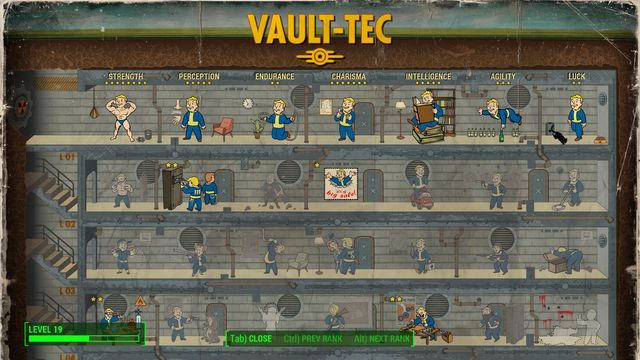 You don't need to distribute the points from the top to the bottom. Nothing stops you from setting the first ability on level 8.

You can assign ability point to one of the seventy perks which are the abilities of your character. These perks are the most important when developing the character. By selecting them you decide about the specialization of your character. In theory, there is no maximum level cap for your character, so if you are persistent enough, you can unlock all of over 200 bonuses. However, the truth is, not many players will reach level higher than 50.

Almost each perk has few levels and unlocking it requires meeting certain requirements. You will always have to have one statistic developed to a certain point and a specific experience level of your character. If your character has too little points of a specific statistic, you can spend one ability point on increasing it.