How to unlock: You must complete few quests for Minutemen and meet with Preston Garvey in the Sanctuary (M1,3).

Getting close to the castle 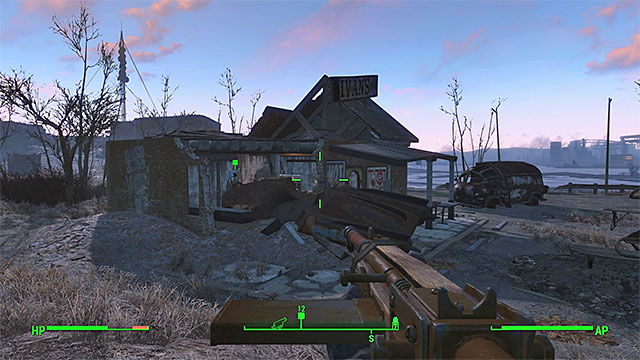 You should receive the chance to start this quest after completing few main and minor (random) quests for Minutemen. During the conversation with Preston Garvey in the Sanctuary, he will ask for your help in reclaiming the Castle that was the main quarter of the Minutemen in the past. The location is in the eastern part of the world map. However, don't rush yourself with this quest, as on the way and in the castle itself you will face very strong enemies. Before going to the castle, make sure that you have a good companion and that you took the best weapons. Inside, among other opponents, you will have to face a powerful boss.

Getting rid of the regular mirelurks 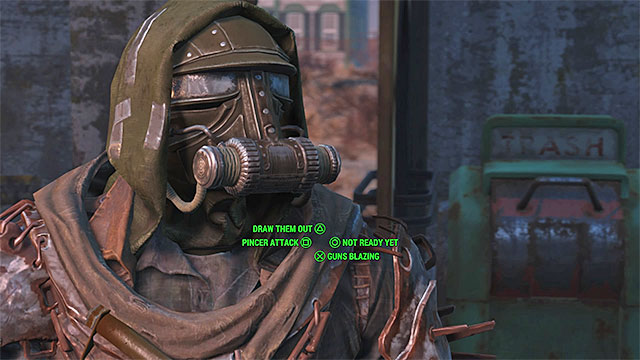 Decide what plan to use when attacking the castle

Once you reach the destination, don't go straight to the castle. First, meet with Preston Garvey and other Minutemen in order to make a plan of getting rid of the mirelurks in the ruins. You can:

Before you get to the castle, collect the ammunition lying around. If you intend to lure the monsters from the castle, you can place some mines on the path that leads there. 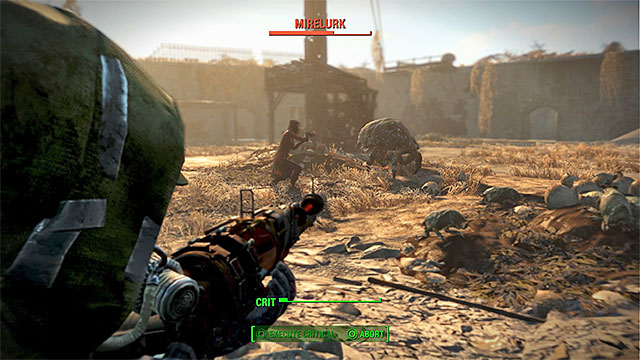 Kill mirelurks one after another

The actual battle will start sooner or later. Mirelurks prefer to attack one after another. Aim at unprotected parts of their bodies (instead of the hard shell) and don't let them get close to you. Take care of your allies during the battle. Preston will be accompanied by "unnamed" Minutemen, but losing any of them might greatly complicate the final part of this quest.

After you take care of most of the mirelurks, you will be tasked with destroying their eggs. Go to the groups of eggs marked by the game and try to destroy them (use the regular gun or melee weapon) before small creatures hatch from them. The things will soon complicate as in the water near the castle the Mirelurk Queen will appear. 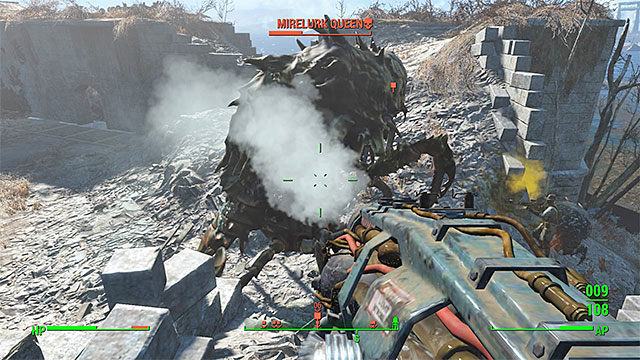 Attack the queen from safe distance and use a good weapon

Defeating the mirelurk queen isn't easy. Most of all, you must avoid her strong ranged attacks, which will not only take large amounts of your health, but its effects will additionally last for few seconds (you can quickly hide behind some good cover just before the attack starts). Don't let the queen get close to your character, keep moving and, if needed, hide in narrow passages. 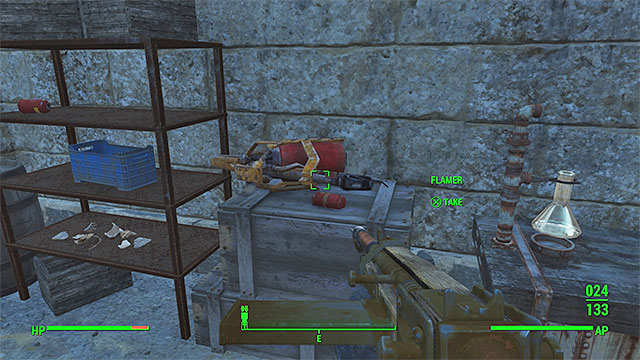 In order to weaken the mirelurks queen, use the best weapon you have. If, despite the warnings, you did not prepared for the battle, then look around the ruins of the castle. You will find additional ammunition, explosives and two good weapons - flamer and rocket launcher. The launcher is dealing very high damage (try not to miss and thus waste rockets - it is better not to use VATS system but aim "manually" instead) and the flamer is additionally good in quickly eliminating the small mirelurks that accompany the queen. Keep fighting until the whole long health bar of the boss is completely drained.

Activating the radio transmitter in the castle 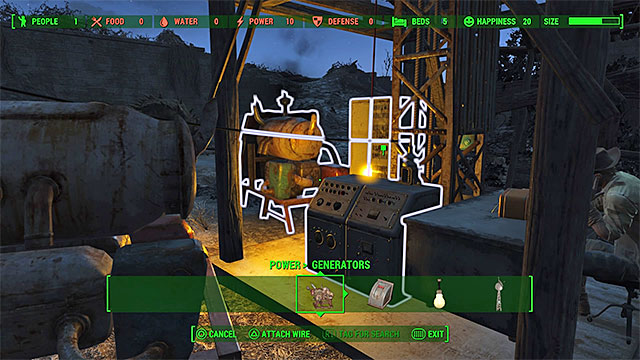 Connect the generators to the radio transmitter

The last part of the quest is much less stressful. You can immediately start taking care of the radio transmitter or first clean the ruins of all remaining mirelurks and their eggs. The transmitter is on the courtyard, examining it will lead to a discovery that you need electricity to power it up. Open the workshop window, go to the "power" tab and pick "generators". The transmitter needs nine power units. The best solution is to place two medium-sized generators nearby. Attach each of them to the transmitter.

Now you can talk for the last time with Preston Garvey in order to end this quest. Your ally should give you a new, random quest. Additionally, other random quests from the Minutemen will unlock when you listen to the radio.