Hacking is a useful ability based on Intelligence. Level four is required for unlocking the ability. Further levels of the ability also have character level requirements. This ability allows you to use the computer terminals protected with passwords. Very often, unlocking them will give you many options: activation/deactivation of enemy robots, opening the locked doors, sometimes safes. Sometimes, inside them you can find holographic tapes or useful information related to quests or history of the location. 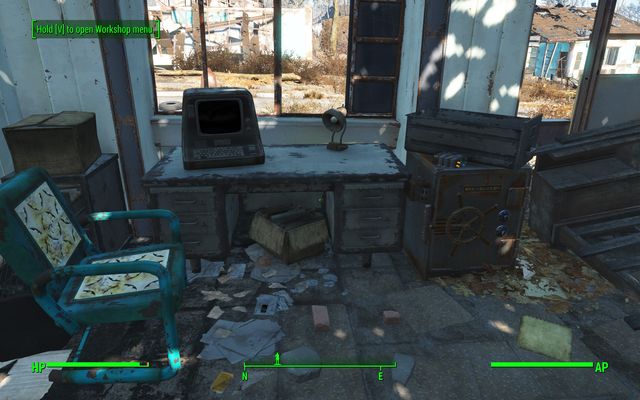 In this case, you can use the terminal to open the safe

The terminals have four-level scale of security: amateur, advanced, expert and master. With each level, the string of letters is longer and the number of available tries is smaller (more about that further in the article). After using all available tries, the computer will be temporarily locked for about 10 seconds. However, turning the terminal off and on regenerates the number of available tries. When you do it, a new password is generated. The only exception is when you gain the master level of the Hacker skill - in that case, the terminals are never blocked. Another, easier option that helps you to hack is obtaining the Science Bobblehead which will always give you one additional free attempt. 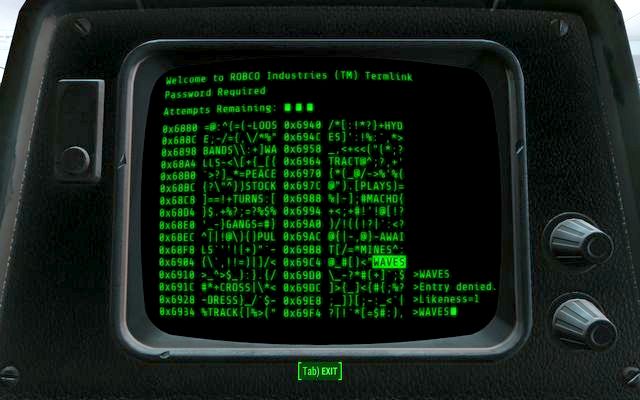 In order to start the hacking, you will need nothing except for the terminal. In the upper bar you can see the number of available tries. You must find the words in the code with characters appearing on the main window - depending on the terminal level, the length of the words will vary. Usually, the first try is a "blind shot" - pick any word, preferably one that has elements that repeats regularly (for example, "es" or "th" ends). In the lower right corner you will see information about how many letters in the word are the same as the letter and its location in the correct password.

Example: FEEL word with probability equal to 2 might mean that words SEEK (two E on the same place) or SELL (E and L on the correct places) can fit the sequence.

If, after typing the first word, you still find it difficult to guess what the password might be, you should pick other word, preferably one that has completely different letters and their order. Once you have two strings of words, you should be able to guess the password on the basic level. After a while, once you hack enough terminals, you will be hacking much faster.

Advice: if you find brackets where, after marking one of them, the whole string inside them will be highlighted, you will receive bonus. The bonus can take one of two forms: either one of the wrong words will be removed (replaced with dots) or the number of your available tries to solve the riddle will be regenerated.