How to unlock: The quest will start in Vault 111 (M1,1) automatically after completing the Prologue. 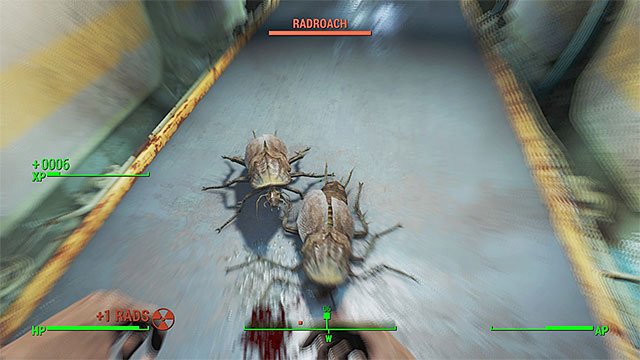 Watch an important cut-scene before you're allowed to leave the cryo chamber. Your main objective is to leave Vault 111 and for most of the time you'll be following a very linear path through the vault, opening doors to gain access to new areas. A radroach is in one of the nearby rooms. Punch the little critter to get rid of it (you don't have any weapons yet). Expect to encounter more radroaches in the adjacent rooms. Keep attacking them one at a time and consume the radroach meat if your health drops too low (it shouldn't). You can also try doing power punches on some of the radroaches for better effects. 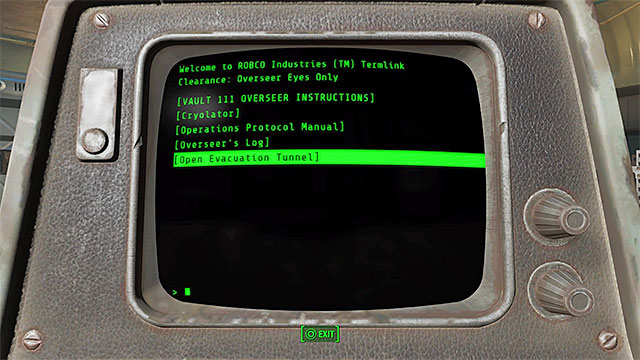 Stop after you've entered a larger room. Look around to find a 10mm Pistol with ammo, a bunch of Stimpaks (you can use them to heal yourself) and a few other items. The most important object here is the Overseer's terminal on the main desk. Interact with it. Choose the last option from the menu - Open Evacuation Tunnel. You can now proceed through a newly unlocked door.

Expect to encounter new radroaches in the next tunnel. You can keep relying on melee combat or you can use the pistol you've just found to eliminate them (consider practicing how to use the V.A.T.S. system as well). 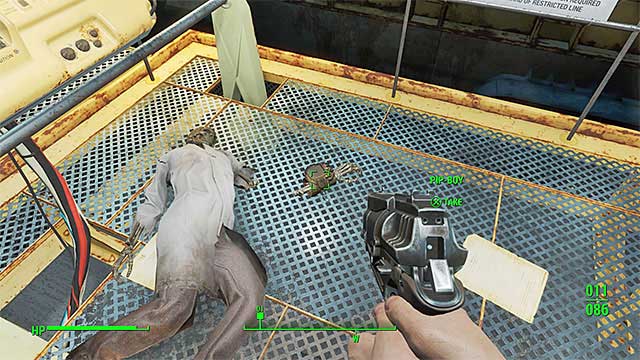 The Pip-Boy will be lying on the ground

You'll soon the last room of the vault. Kill the final radroaches (you can sneak up on them if you want to) and search the ground near a corpse to find a Pip-Boy. Once you've familiarized yourself with how the Pip-Boy works close it and interact with the vault door controls. Wait for the huge door to open and go to the elevator. You can decide to leave the vault right away or you can make some final changes to your character (name, SPECIAL, appearance). 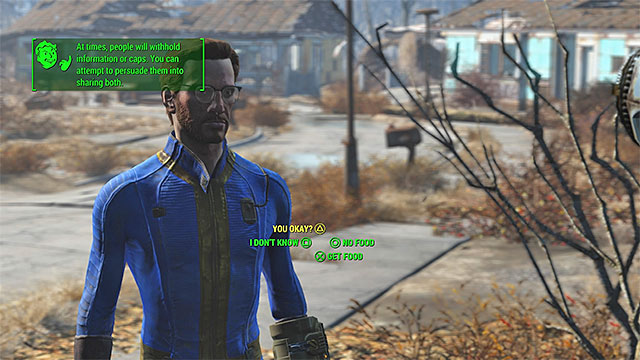 It's worth trying to use persuasion

Head east and you'll soon reach Sanctuary. It's the neighborhood where you've started the game, but obviously it's devastated now. Look around to find Codsworth and talk to the robot. You can choose a unique persuasion dialogue option (the yellow one) during the conversation if your Charisma is high enough. If you succeed you'll receive a holotape (Hi Honey!) from Codsworth. You can then search the Sanctuary together or you can do it alone. It's not too complicated - visit some of the houses (including your own), kill a few weak monsters and talk to Codsworth again once you're done. The robot will suggest that you go to a nearby town of Concord. 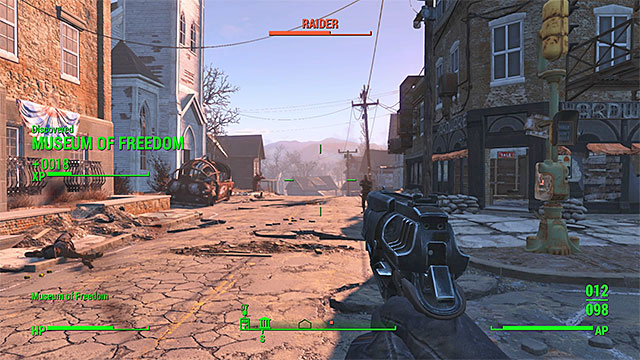 Eliminate the raiders stationed around the museum

Concord is located to the south-east from Sanctuary and you can get there by travelling in a straight line or (a safer option) by staying on a main road (make sure to visit the Red Rocket Truck Stop along the way, because you can "recruit" Dogmeat there). Watch out for bloodbug hatchlings near the entrance to Concord. They can inflict more damage than the radroaches you've fought so far so you must be more careful (you can also go around them). Follow the sounds of gunshots and you'll find the Museum of Freedom. You'll witness the local residents here engaged in a gunfight with the raiders. Help in getting rid of the (first wave) of bandits. You'll then be asked by Preston Garvey to help in securing the museum and a new main quest will begin - When Freedom Calls.