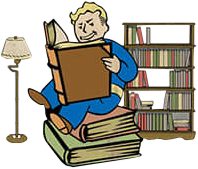 Intelligence is a measure of your overall mental acuity, and affects the number of Experience Points earned.

V.A.N.S. - Let Vault-Tec guide you! The path to your closest quest target is displayed in V.A.T.S. (1 Ranks)

Scrapper - Waste not, want not! You can salvage uncommon components like screws, aluminum, and copper when scrapping weapons and armor. (2 Ranks)

Robotics Expert - Machines will always serve humans, if you have anything to say about it. Hack a robot, and gain a chance to power it on or off, or initiate a self-destruct. (3 Ranks)

Nerd Rage - Genius. Is. ANGRY! When your Health drops below 20%, time slows and you gain +20 Damage Resistance and do 20% more damage while the effect lasts. (3 Ranks)