During The Lost Sanctuary mission in God of War: Ragnarok, you'll assume control of Atreus for the second time. Our walkthrough shows where to meet Angrboda and how to use her abilities, how to get past Ironwood and the canyon, how to locate and destroy Wretches in the sinkhole, how to help the wolf captured by Gryla and how to leave Jotunheim. 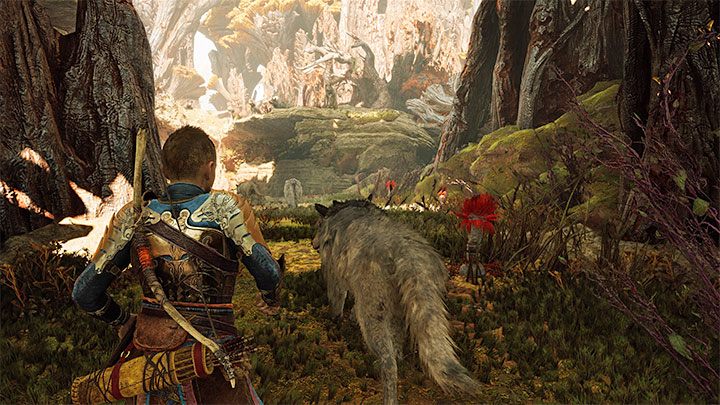 During The Lost Sanctuary, you'll once again assume control of Atreus whom you will control for the duration of the quest.

Start by interacting with the character with a mask. You'll be taken to Jotunheim - continue by following the friendly wolves. You'll meet Angrboda, who will become Atreus's companion for the duration of this task.

In Jotunheim, you can encounter loot and crafting components used for Atreus's equipment upgrades - we recommend searching the explored locations thoroughly. You'll also be able to upgrade Atreus' skills, so don't miss out and spend accumulated XP on new abilities. 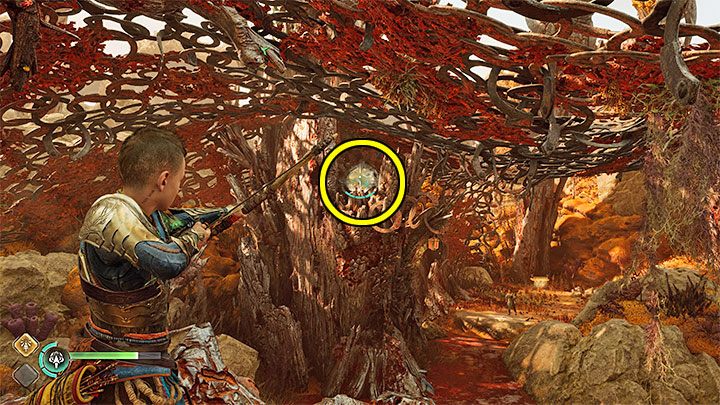 You have to follow Angrboda. Use the bow on green blockades to unlock pathways for Atreus (Angrboda will follow her own path).

Grab the higher ledge and face encountered opponents. Hit the upper seal so an interactive hook is unlocked. Now destroy the green barricades and hit the seal from the screenshot. You will unlock another interactive hitch. 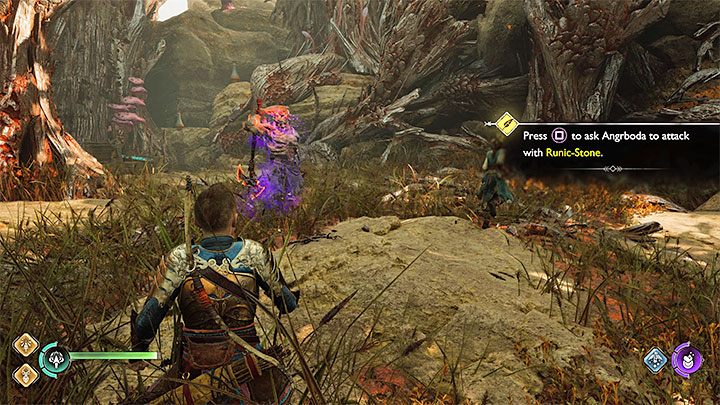 Follow the path laid by upper ledges and reveal another hook by using arrows.

During the next combat section, you'll learn of the ability to ask Angrboda for help (Square). She has a Runic Stone at her disposal. Opponents struck by the Stone get covered in purple dust, which explodes when hit with Atreus' arrows. This is a good way of quick stunning and disposing of monsters. 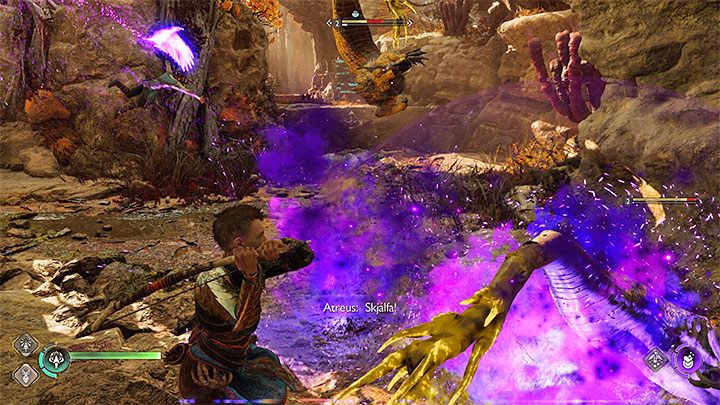 Destroy additional barricades to reach a large boulder which Atreus and Angrboda must lift together. Grab the upper hook and jump to a round structure.

Angrboda will propose a race, but you don't have to win it in order to continue with the story. During the next combat section, you'll learn of the possibility of summoning a Spirit Falcon. This is Angrboda's alternative attack (her main is the Runic Stone) and can be activated by holding Square. Use this new ability in order to deal with the opponents more efficiently.

Meet Angrboda at the shrine 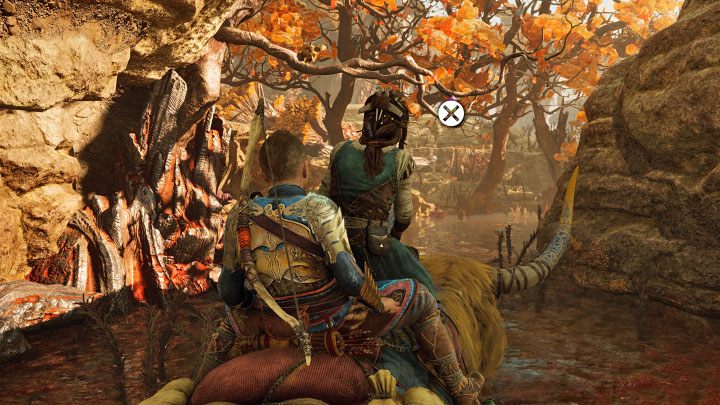 You will reach Angrboda's Treehouse - a safe location. Look at the drawings on the rock on the left (during the quest, you'll unlock two additional ones).

Take the bag - you can feed Jalla - a friendly animal. The next section is explored from Jalla's back, and you need to progress through the Vimur River location. As you travel, collect Jotunheim Fruit - the first one is hanging from a tree (screenshot) and you need to get closer to it in order to collect it. 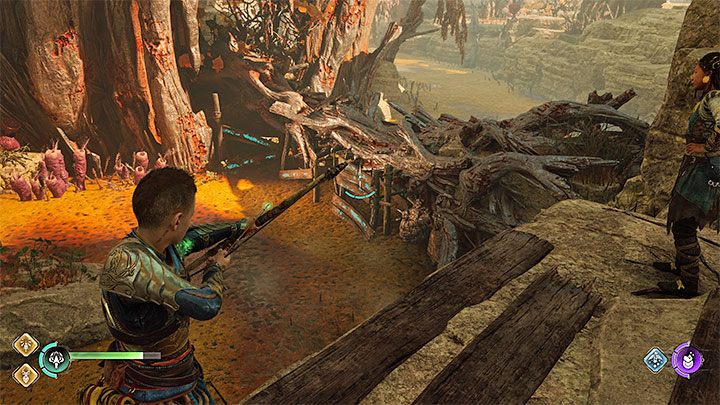 Climb up to the ledge, wait for Angrboda to sit on the branch and pick up another fruit. During that time, Jalla will bypass the obstacle and the journey may continue. You can collect further fruit (even after you've completed the objective), as each picked one is rewarded with 50 XP.

You will reach an obstacle that Jalla is unable to overcome. Use sound arrows to hit the green boards marked in the screenshot. 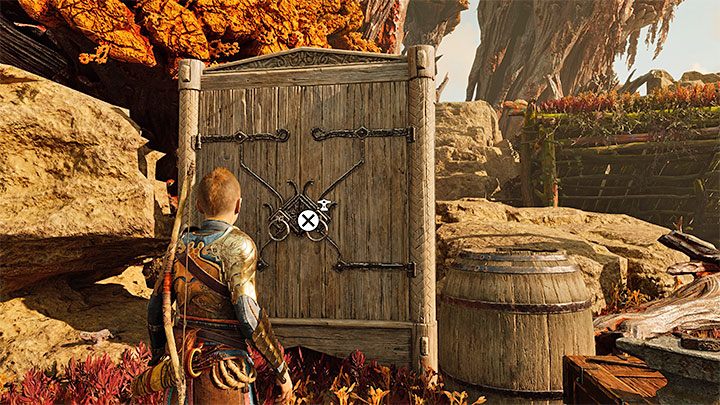 This unlocks the path forward - you are back to Angrboda's house. Place the fruit in the bucket. You can now explore your surroundings, and the main thing here is to look inside the large closet from screenshot above. Among others, you'll find Jotnar's Champion Garb, and Jotnar Bow recipe, which has increased runic damage. You can craft it and set it as active provided you have the necessary ingredients (Ydalir Timber). 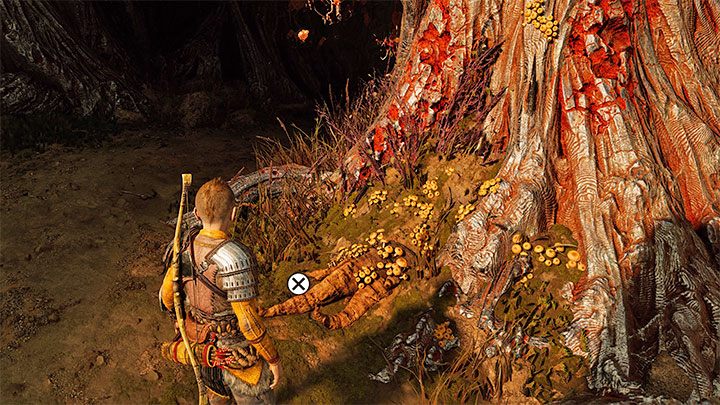 Climb onto Jalla's back to begin another excursion. This time, you need to collect roots - Angrboda will collect the first one, and you can continue by getting another (screenshot). 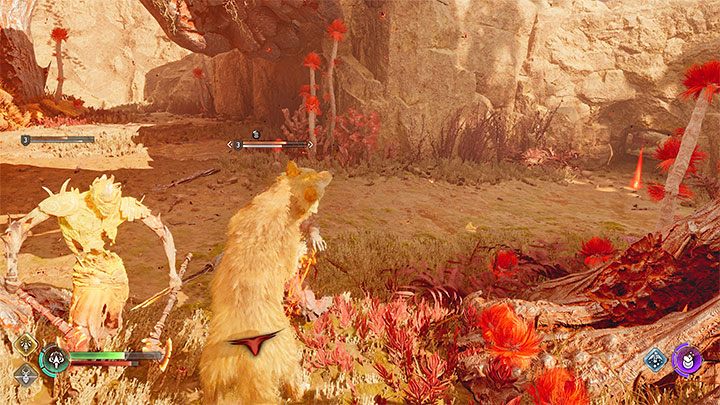 At some point, monsters will appear making you fall off Jalla's back. During the battle, you'll unlock a new ability - Atreus' Spartan Rage (L3 R3)

The default form of Spartan Rage turns you into a huge wolf, and defeating opponents is much easier in this form. Look for more roots between battles. Once again, you will return to the Angrboda's house - place the collected roots in the bucket. 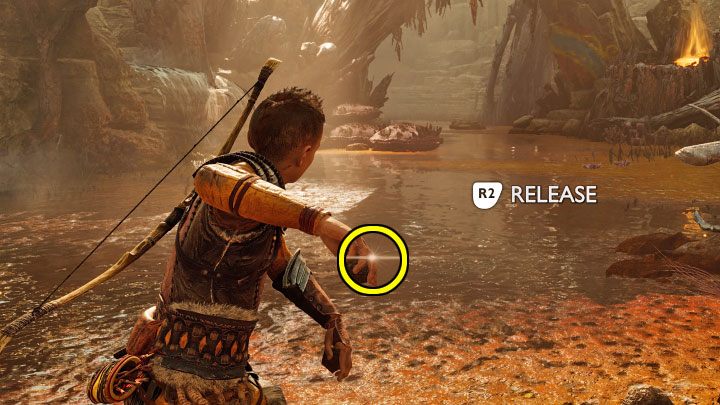 Climb back on Jalla. Along the way, you can optionally perfect the technique of skipping stones - you need to release R2 the exact moment a small flash appears by Atreus's hand (screenshot). A sufficient number of successful throws unlocks an optional treasure.

The main route will lead you to the Trail of the Jotnar. Explore the canyon and defeat encountered monsters. You will reach The Valley of the Fallen. On the way back to Jalla, you'll encounter a powerful beast - keep it at distance, use special attacks, and dodge often. Alternatively, wait until Spartan Rage is charged. Reach the elevator and return to Jalla.

Clear the wretches from the sinkhole 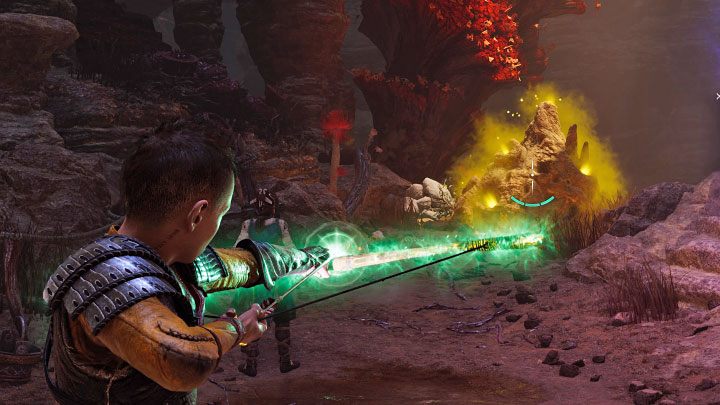 Angrboda will unlock a hidden passage that leads to a sinkhole - you must descend into it by using the rope. Once at the bottom, you can ask Angrboda to light a torch (Square when facing the torch).

You have to search the area for Wretch nests and destroy them with ranged or melee attacks so no more wretches come out of them. You'll know that you are close to a nest when single Wretches appear near you. Search the area. 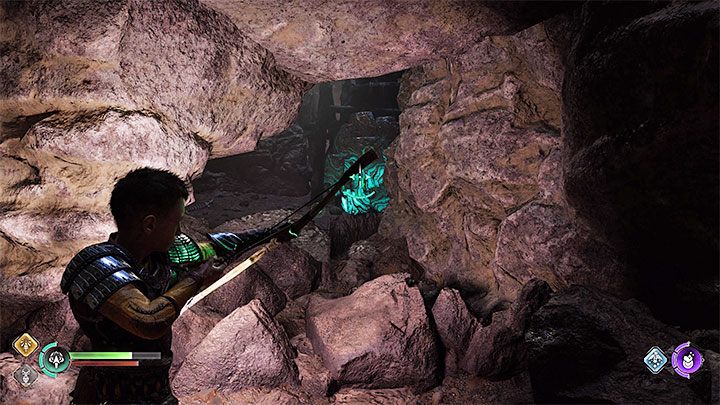 There are also other varieties of monsters in the sinkhole. Some nests are hidden behind green barricades. One of the barricades is destroyed by shooting through a hole in the rocks (screenshot). There are a total of 4 nests to be destroyed.

After the nests are cleared, you need to return to the surface - follow Angrboda. Along the way, you'll have to deal with Bersgra (use Spartan Rage to deal damage and Angrboda's help to stun the beast) Use the rope to leave the caves.

Free the wolf from Gryla's clutches 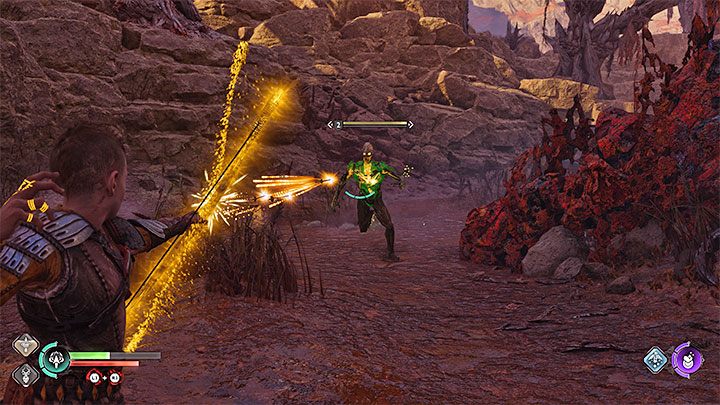 Climb back on Jalla and start exploring the swamp. You will soon learn about Gryla and the wolf captured by her. You'll encounter monsters that leap toward you in suicidal attacks and spray acid as they explode. Attack them from a distance and if they manage to get close, dodge.

Continue by destroying further green barricades with sound arrows. Here you'll encounter Wulver. You need to defeat the werewolf - use Spartan Rage to deal damage and Angrboda's help to stun the beast. Make sure to stay at a distance through dodges and evading. 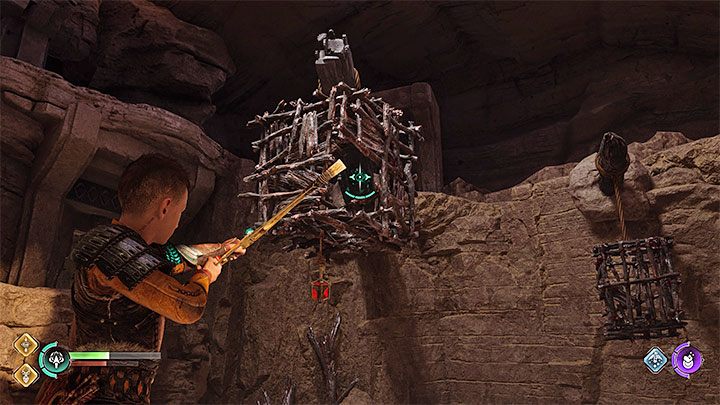 You will reach a blocked passage. Look for interactive hooks in the area and position yourself so you're able to hit a green object on the hanging cage (screenshot). Wait for Angrboda to unlock the upper passage.

You've entered the domain of Gryla. Stand at the door with key inserted. Continue forward and use your bow to hit green targets with arrows. In the next room help Angrboda move the object. 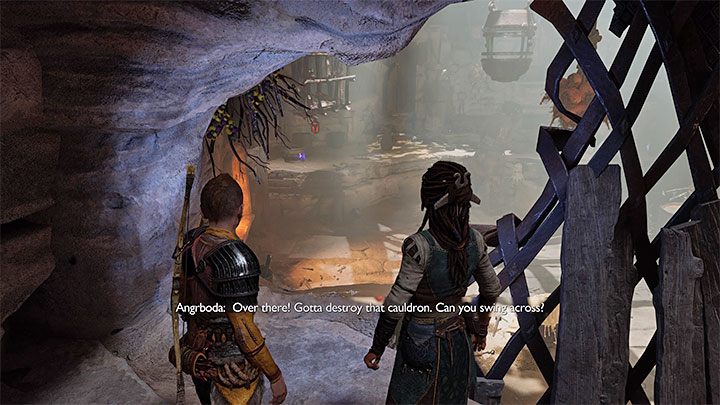 Gryla has appeared - you need to sneak and move slowly in the direction of the captured wolf. Once you reach him, press the interaction button - this will get Gryla's attention. Enter the narrow pathway and reach the upper part of the hall.

You need to face Gryla in order to be able to destroy her rune-covered cauldron. This boss fight is described in more detail on the Gryla page in the Bosses chapter - the cauldron has its own health bar which has to be depleted. 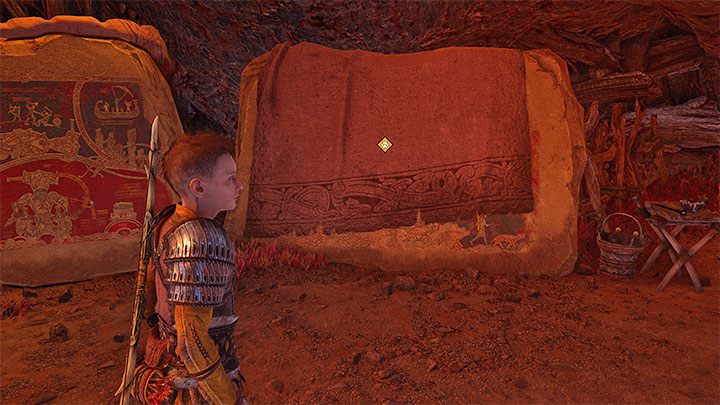 After Gryla escapes, squeeze through near the barrel. Atreus will turn into a wolf and you can optionally race against Angrboda, but the outcome of the race is scripted.

Before you proceed with the story, explore Angrboda's house for the final time - there are interaction icons next to some objects. To finish up in Jotunheim, reveal the drawing on the final rock. 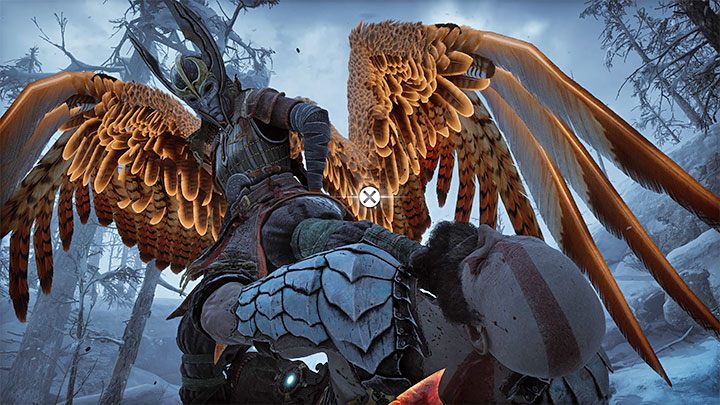 Atreus will ba back at the heroes' hut in Midgard. There are Hel forces outside and you need to deal with them. Remember to break enemies' defense by pressing 2xL1 and use Atreus' special attacks.

Once you attempt to use the Mystic Gateway, Kratos will appear, and the focus switches back to him. Deal with addiitonal opponents. At some point a boss - Valkyrie - will appear. The walkthrough for this boss fight can be found on the Vanadis page in the Bosses chapter.