This page contains our walkthrough for The City Lost to Time available in Pillars of Eternity 2 Deadfire. This is the final quest which ends the whole adventure. The campaign's finale takes place in Ukaizo. The most important moments are the fight with the final boss, the Guardian of Ukaizo, and the final meeting with Eothas - here, you have to choose dialog lines that will determine your ending.

The final boss - the Guardian of Ukaizo 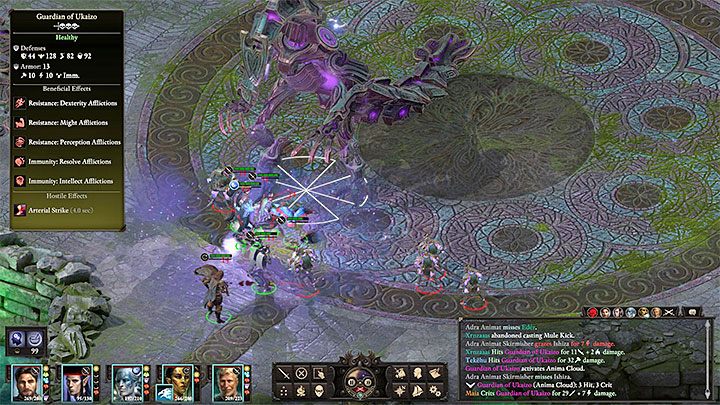 This quest starts after reaching Ukaizo Harbor (M45,1). Reach the "arena" (M45,2) to trigger the encounter with the giant Guardian of Ukaizo (you could have noticed it and even attack during the storm). You can speak with the machine but none of the dialog lines will allow you to avoid this confrontation.

The Guardian of Ukaizo is the most powerful enemy in the game. It has numerous abilities that not only deal damage to your party but also to inflict various negative statuses. Examine them on an ongoing basis and react by using the right potions or spells. Remember that the Guardian of Ukaizo is invulnerable to Intellect and Resolve afflictions, and resistant to Perception, Might and Dexterity afflictions.

At the beginning you should focus your entire party on the boss. However, shortly after that a group of Adra Animats will appear on the battlefield. Order one character to keep attacking the boss and to distract him while the rest of the party should deal with the Animats. Luckily for you, these enemies aren't strong. Also, there won't be new enemies to fill in for the fallen ones. 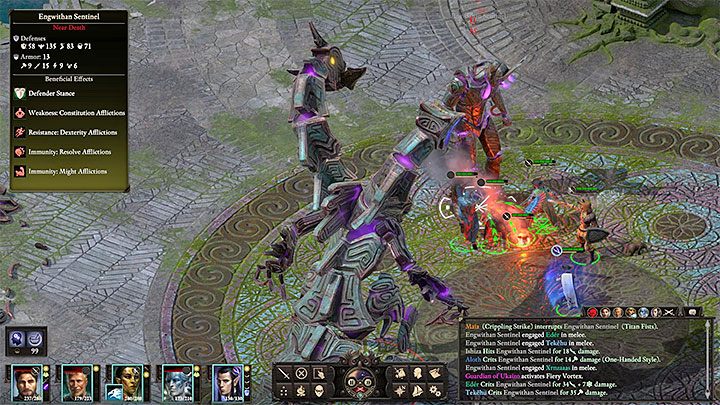 After dealing enough damage, two Engwithan Sentinels will appear (number of enemies can differ and this depends on your difficulty level - this walkthrough is based on the classic/normal difficulty level). Use the fact that the Guardian of Ukaizo won't attack you for a moment so try to eliminate at least one Sentinel as fast as you can. The fight with them is similar to the one with the Titan in Poko Kohara ruins. Sentinels are invulnerable to Might and Resolve afflictions, resistant to Dexterity afflictions and vulnerable to Constitution afflictions. Don't let them get close to weaker party members - their melee attacks (e.g. Knock Down) are very powerful.

That is not all - soon, two Engwithan Hierarchs will appear on the battlefield. They are stronger versions of Engwithan Saints. Hierarchs are invulnerable to poison, diseases and Dexterity afflictions, and resistant to Resolve afflictions. Focus your entire party on them - these enemies can cast powerful spells that can weaken your characters.

Later, the Guardian of Ukaizo will "grow" two additional heads. The machine's attacks have become even deadlier. Try to keep your party alive for as long as you can - losing an important party member can make this fight more difficult. Keep fighting until the Guardian's health bar goes to zero. 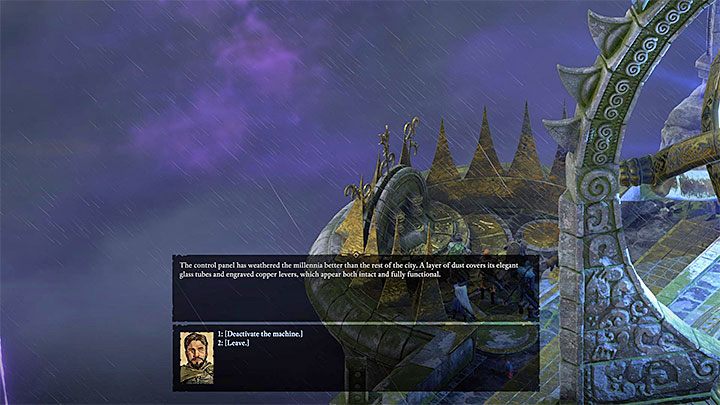 Don't forget to choose the resting option after the fight. This is important because you are about to participate in another battle (this one is easier). Go to Grand Promenade (M45,3). Here, you will have to speak with your companions.

Reach Ondra's Spire (M45,4). Approach the control panel (M45,5) and turn the machine off to be able to get rid of the storm that blocks you from reaching Eothas. This triggers a scripted interaction during which you can speak with the gods. This conversation also doesn't have any key decisions. 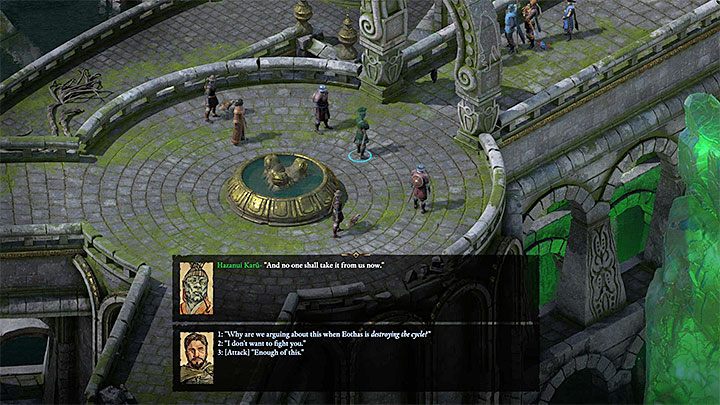 Go back to the Grand Promenade. The party comes across members of the hostile faction (M45,6). This isn't a predetermined group - you will meet a faction that has the worst relation with you.

This fight also can't be avoided through dialog. Focus on eliminating the strongest enemy, the faction's leader, and the Wizards. Leave the rest for later.

You can now proceed to Pillars of Eternity 2's main endings page.