This chapter contains the walkthrough of He Waits in Fire, a main quest in Pillars of Eternity 2 Deadfire. This quest starts automatically after you examine the lighthouse on Hasongo Island. The described quest forces the team to visit Ashen Maw, where a man called Eothas expects the party. The team must venture through several areas, until they are able to reach Eothas' head and have a conversation with him.

Note - due to the higher recommended level of the area, it is worth to postpone the adventure here until all of your party members are at least at 12-13 level. Some of the battles here can be avoided, but you should still be prepared, in case an important meeting with potential enemies go south. Additionally, it is recommended to acquire potions and spells increasing fire resistance, as well as those that allow the party to attack with frost-based attacks. Both of those will make the encounters in Ashen Maw significantly easier.

Reaching Ashen Maw and going through The Sentinel Wall 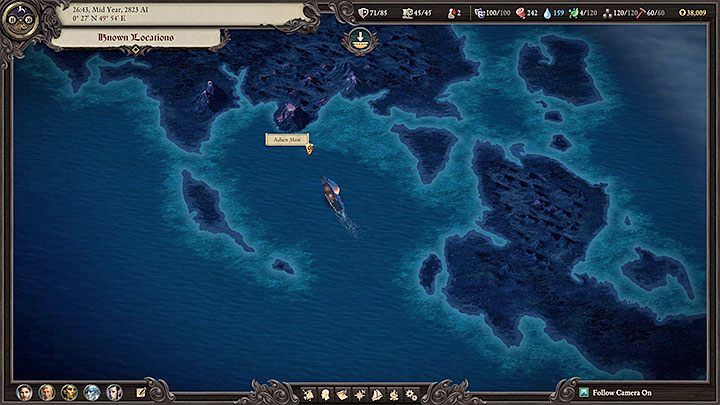 Ashen Maw can be found in the northern part of the map. There might be ships with hostile crews circling around the island - you can either take them on or avoid contact. Once you reach the destination, you will be transported to the harbor in the first area of the Maw (M40,1). Go through the bridge. You should by now stumble upon a dying Rathun Vanguard. You can speak with him about Eothas and leave him, use one of the special dialogue options (Religion 5 + History 7 / Eothas' Priest) or end his suffering (a regular dialogue option or using Alchemy 4).

Enter The Sentinel Wall (M40,2). You need to head east. After reaching the closed doors (M40,3), use Mechanics 10 or visit the northern room (M40,4) and search through the body to acquire the Ashen Key. Once you enter the stronghold, the team will be stopped by new Rathun. You have two options here - you can either initiate an encounter or talk yourself out of this with special dialogue options. You can u se Metaphysics 5 / Religion 5 / Insight 5 / Magrana's Priest dialogue option to avoid the encounter. Once the meeting is over, use the passage to get to Bridge of Ashes (M40,6). 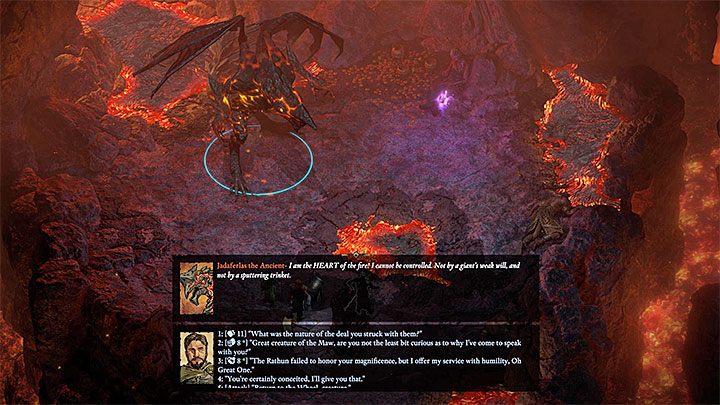 On the bridge you will encounter young drakes and fire bats (M40,7). It is difficult to avoid those enemies here, especially given the fact that you need to reach Lair of the Ancient (M40,8). Start by reaching the place where the first soul is located (M40,9). Read the soul, save the game just in case and then enter the magma lake (M40,10). This will result in dragoness Jadaferlas appearance and the meeting can have several outcomes.

You do not have to fight with the dragoness, although in that case you will need to pass one or more tests associated with the following skills: Resolve / Bluff / Diplomacy / Intimidation / Survival / Religion / History/ Magrana's priest. Depending on the level of the ability and the "state" of the conversation, you might need from 8-11 to 12-16 points to past those tests.

If you fail the tests or initiate the fight on your own, be prepared for a difficult encounter. She is extremely durable and deals considerable amount of damage (mainly in melee combat and by using fire). If you caused an encounter, keep weaker members of the party away from her. The dragoness is resistant to Might, Resolve and Dexterity status effects and invulnerable to Intellect-based ones. Additionally, she can "summon" Magna Oozes. Ignore the additional monsters, unless they are a direct threat to your mages, rogues and other weaker characters. Once killed, the dragoness will leave various crafting materials, such as Magma Dragon Gizzard Stone.

Acquiring Torc of Bithatken and reaching The Jagged Keep 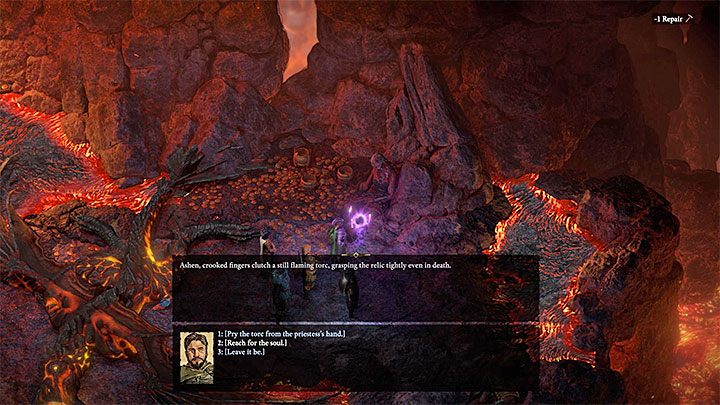 Regardless of your choices during the meeting with Jadaferlas, reach the second soul shown in the above screenshot (M40,11) and read it. This will allow you to acquire a very important quest item - Torc of Bithakten. You can also collect other valuable artifact from the containers in the dragoness' lair, such as ldris Blade of Captain Crow and Ajamuut's Stalking Cloak (+1 to Perception, +2 to Stealth; bonus to damage from stealth).

Return back to Bridge of Ashes and this time head north-east to reach Jezastej Warowni (M40,12). Here you will be stopped by a Rathun Raider as soon as you enter a larger room (M40,13). During the conversation it is advised to mention the topic of the item you have found in the dragoness' lair. This will allow you to through the stronghold without initiating any new encounters. If, however, you provoke a fight, you will be fighting against all Rathun warrioirs located in the stronghold.

Going through The Jagged Keep and meeting with Bathor Erkon 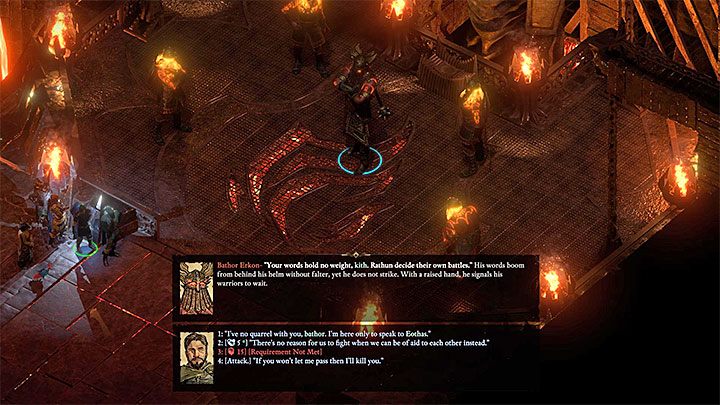 Here you need to reach the north-eastern Magrana's shrine (M40,18) and the easiest way is to simply move through the armory (M40,16) and blacksmith (M40,17). If, for some reason, you cannot go through here (because, for instance, Rathuni are hunting the team and you need to sneak), you can march through the side corridors (M40,15). In the room with the shrine the team will be stopped by Bathor Erkon. This is another important meeting - it is worth to save the game before it. This encounter can lead to two outcomes:

Placing Torc of Bithatken on the altar and meeting with Eothas 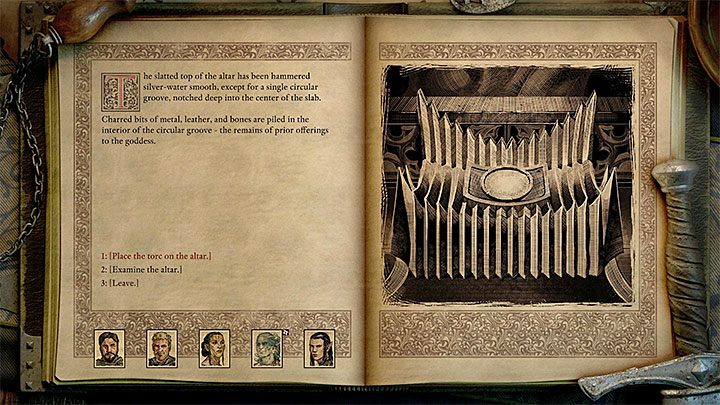 Regardless of your choices, interact with the shrine and a conversation with Magrana will initiate. The conversation is rather linear (a number of unique dialogue options for, for instance, Magrana's Priest). Once it is over, place Torc of Bithatken (from M40,11) on the altar. As a result, the team will be transported to Foundations of the Ashen Maw (M40,19). Here you need to approach Eothas (M40,20) to speak with the man. Similarly to the "talks" from the previous main quest, the dialogue options you select affect the character of the protagonist. None of the available dialogue options have any drastic impact on the further parts of this quest.

Once the meeting is over, a new paragraph scene will initiate. Similarly to the previous one, this scene also has a rather linear course. Afterwards, the team will be automatically transported to Kahanga Palace in Neketace (M25,1). A conversation with Queen Onekaza II and other representatives of the factions will be initiated. You will receive a new quest, The Coming Storm, about travelling to Ukaizo with the help of Ondra's Mortar and an eventual alliance with one of the main factions of the Deadfire Archipelago.