Rathun Docks. You begin exploring the Ashen Maw here. To the north of the starting area you'll find a small troll - pet Grog (+1 to Resolve).

Passageway to The Sentinel Wall. You will encounter a Rathun Vanguard on the bridge - you can talk to him and leave him be or finish him off.

Small room. Several containers with small loot (including a prybar). The eastern doors are closed and they have a lvl 10 lock - open it or use the key from (04).

Room with a hole in the wall. The chest with a lvl 6 lock contains high quality gauntlets, a potion and gold. Checking the crushed corpse will allow you to find the Ashen key to open the door in (03).

Sentinel Tower. You will encounter a group of Rathuns here. You can defeat them in combat or convince them to let you through thanks to Metaphysics 5 / Religion 5 / Insight 5 / Magrana priest dialogue option. Stands with a heavy plate armor and a pollaxe.

Passageway connecting The Sentinel Wall and The Ashen Bridge.

Central part of the bridge. Young Drakes and Flame Bats are here - you can attack the monster or sneak past them.

Passageway connecting The Ashen Bridge and the Lair of the Ancient.

First soul. You can read it on your way to the dragon's lair.

Magma lake. A giant dragon Jadaferlas the Ancient will appear after reaching the lake. You can initiate a huge battle with her (she's tough to beat - she's a boss) or you can complete the conversation without engaging in combat (passing at least one skill check will be required - Resolve / Bluff / Diplomacy / Intimidate / Survival / Religion / Historu / Magrana priest).

Second soul. You can read it after defeating the dragon or after completing a conversation with her. You'll get an important quest item here - Torc of Bithakten. You can use on the Shrine of Magran in The Jagged Keep (18). There are three containers with loot here. The most valuable treasures are the Aldris Blade of Captain Crow sabre and the Ajamuut's Stalking Cloak (+1 to Perception, +2 to Stealth, bonuses to stealth attacks).

Passageway connecting The Ashen Bridge and The Jagged Keep.

Keep's entrance hall. Upon entering this room a conversation with a Rathun Raider will start. You can provoke combat, but in this case you will have to deal with other characters from the keep. Alternatively you can avoid combat by showing the Torc of Bithakten taken from the dragon's lair (11).

Rathun Hall of Warriors. Rathun warriors are here and depending on the decision made in (13) they can be neutral or hostile towards your team. Containers with bombs and potions. There's an Ornate Ashen Key on the large table - it unlocks all the closed doors in the keep.

Side corridors. Using this passageways provides an alternative way of reaching the forge. It's good to have the Ornate Ashen Key from (14) with you. After reaching the large stone door find a secret switch on the wall. There are traps in the northern corridor and one of them is installed on a lvl 9 chest - it contains potions and Firethrower's Gloves (+2 to Dexterity and Explosives; +1 to Arcana; bonuses to Evocation).

Rathun Forge. You can get here from the armory (16) or from the side corridors (15) after opening a lvl 10 door (you can use the Ornate Ashen Key from 14). You can find high quality war hammer and shield here, as well as Knapped Scoria Figurine (used for summoning magma oozes).

Shrine of Magran. Bathor Erkon is guarding access to the shrine. If you'll attack him then you'll have to win a tough battle with enemies from this room. You can avoid combat thanks to Diplomacy 5 / Intellect 15 and by mentioning the findings from the dragon's lair (10). You must talk to Magrana and place the Torc of Bithakten found in (11) in the altar. You will be transported to the Foundations of the Ashen Maw (19).

Area where you begin exploring the Foundations. You will end up here after placing the Torc of Bithakten in the altar in (18).

Area where you meet with Eothas. A conversation with Eothas ends your visit to the Ashen Maw. A scripted interaction will trigger and you'll return to Kahanga Palace (M25).

The above map presents the location called Ashen Maw. You will explore this location as a part of He Waits in Fire main quest, which focuses around catching Eothas and meeting with the man. The described location is divided into several medium-sized areas. During the exploration, the party can take part in battles, but proper selection of dialogue options will allow you to avoid some of the more difficult ones. There are treasures awaiting for the party here, all marked on our map.

1. Rathun Harbor. You start the exploration of Ashem Maw here. To the north of the starting location you can find a small troll pet, Grog (+1 to Resolve; the team cannot initiate encounters and is invulnerable to initiation from enemies; every member of the party dies upon losing consciousness).

4. Room with a hole in the wall. In the chest with a level 6 lock you will find high quality gloves, a potion and gold. Additionally, Ashen Key can be found at the crushed corpse - it is used to open the doors in (M40,3).

5. Guard Tower. Rathun can be found here. You can either defeat them in combat or convince them to step aside with the use of Metaphysics 5 / Religion 5 / Insight 5 / Magrana's priest dialogue option.

10. Lake of magma. After approaching the lake, Jadaferlas the Ancient will appear. You can either take her on (the encounter is difficult - this is a boss) or lead a conversation in such a way to avoid the confrontation (passing one or more skill tests is necessary - Resolve / Bluff, Diplomacy, Intimidation, Survival, Religion, History, Magrana's Priest).

11. Second soul. You can read her after killing / speaking with the dragon. You will acquire an important quest item - Torch of Bithakten. You can use the item on the Magrana's Priest in The Jagged Keep (M40,18).

There are three treasure containers here. The most valuable treasures are Adris Blade of Captain Crow and Ajanut's Stalking Cloak (+1 to Perception, 2+ to Stealth, bonus to attacks from stealth).

13. Entrance to the stronghold. After entering the room, a conversation with a Rathun Raider will initiate. You can force an encounter, but then you have to fight with all of the remaining characters in the stronghold. Alternatively, you can avoid combat by showing the Torch of Bithatken you acquired in the dragon lair (M40,11).

14. Rathun hall of warriors. Rathun Warriors can be found here and depending on the reaction in (M40,13) they can either be neutral or hostile towards the team.

Containers with bombs and potions. Ornate Ashen Key can be found lying on the large table - it opens all of the closed doors in the stronghold.

15. Side corridors. Using them will allow you to reach the blacksmith (M40,17) via a different route. It is advised to have Ornate Ashen Key from (M40,14). Once you reach the large stone doors, look for the secret switch on the wall.

In the northern corridor you will find traps, one of which is installed on a chest with level 9 lock - inside of it you will find potions and unique gloves (+2 to Dexterity and Explosives, +1 to Arcana; a bonus to Evocation).

Here you can find a high quality warhammer and a shield, as well as Knapped Scoria Figurine (allowing you to summon magma slimes).

18. Magrana's Shrine. Bathor Erkon secures the entrance to the shrine. If you attack him, a difficult encounter with Rathun warriors await you. You can avoid combat by using Diplomacy 5 / Intellect 15 and mentioning your discoveries from the dragon's lair. (M40,10).

You can speak with Magrana and place the Torch of Bitkatken, found in (M40,11), on the altar. You will be transported to Foundations of the Ashen Maw (M40,19).

20. Eothas meeting place. Conversation with Eothas ends the visit in Ashen Maw. Afterwards, a paragraph scene will initiate and you will be transported back to Kahanga Palace (M25,1).

Jadaferlas the Ancient (M40,10) - initially, the dragoness is not hostile towards the party. You can cause an encounter with her by choosing the incorrect dialogue options during the conversation. Taking her out is difficult (she is a boss).

Bathor Erkon (M40,18) - he guards the entrance to Magrana's Shrine. If you provoke him, a difficult battle with him and nearby rathun warriors will initiate.

Types of enemies and monsters in Ashen Maw 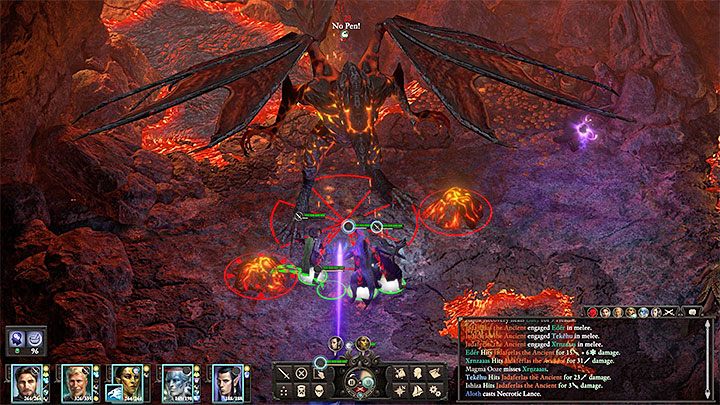 Jadaferlas the Ancient - a powerful dragoness that can be described as a boss, as she is extremely durable and deals considerable amount of damage (mainly in melee combat and by using fire). If you caused an encounter, keep weaker members of the party away from her. The dragoness is resistant to Might, Resolve and Dexterity status effects and invulnerable to Intellect-based ones. Additionally, she can "summon" Magna Oozes. Ignore the additional monsters, unless they are a direct threat to your mages, rogues and other weaker characters.

Rathun Warriors - fighting with them becomes a necessity only if you provoke them during a conversation. There are several types of those giants, but you must always keep in mind that they are resistant to Constitution-based statuses and their attacks are mostly fire-based. On the other hand, they are vulnerable Frost-based attacks and Dexterity status effect.

Bathor Erkon - the most powerful Rathun warrior from the described location. You can avoid the encounter with the man. If you lead to it, defeating him will be difficult. You should focus your attention to the other enemies accompanying the main foe.

Flame Bat - they are immune to fire, diseases and dexterity-based statuses, resistant to Perception-based statues and vulnerable to frost.

Young Drake - they are resistant to dexterity-based statuses and can cause high fire damage with their breath attacks.

Magma Ooze - they are immune to fire and intellect-based status effects. Frost is their weakness.

Other information related to Ashen Maw

You should think about visiting Ashen Maw and taking on He Waits in Fire quest once your entire party has advanced to at least level 12-13. Theoretically, you can complete this quest without having to fight with the more powerful enemies and monsters you stumble upon, but even then you need to have properly developed skills to use during dialogues. You can have difficulties winning some of the battles if your party is not strong enough.

A vast majority of enemies and monsters in Ashen Maw use fire-based attacks and abilities to deal damage and are resistant to that element. On the other hand, they are vulnerable to frost-based attacks. Due to those facts, you should prepare accordingly before venturing here - potions and spells increasing resistance to fire and allowing you to launch effective frost-based attacks.

During the exploration of Ashen Maw, you can again stumble upon incinerated bodies. Do not forget to click on them, as it will allow you to acquire resources and other loot.

Try to thoroughly explore all of the locations before you speak with Eothas - once the conversation with the man is over, the team automatically leaves Ashen Maw and is transported to Kahanga Palace in Neketace. The dragoness' lair is of the highest importance, as there are, above all else, two unique and very valuable items hidden there.