The Coming Storm is the second to last main quest in Pillars of Eternity 2 Deadfire. This is an unusual mission because there isn't much to do. Your goal is to reach Ukaizo island where the finale of the will take place. It is important to know that you can reach Ukaizo in a few different ways depending on your actions or started quests. Below, and on the next few pages of this guide, you can check out information on preparations for the finale.

Important note - Journey to Ukaizo is a one-way trip. Once you get there, you won't be able to travel back to the world map. Also, the game doesn't allow you to play after completing the main storyline, even after achieving one of the "good" endings. 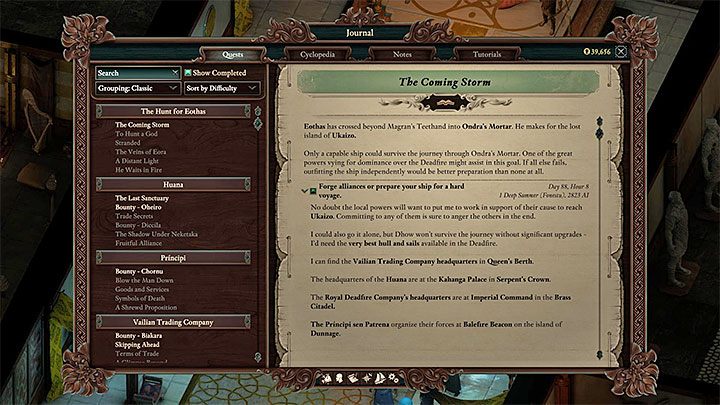 The Coming Storm quest can be completed in five different ways. Each of the variants has the same goal - reaching Ukaizo. However, your choice not only has impact on your journey itself but also on the game's ending (e,g, how a given faction has acted at the end of the campaign).

1. Reaching Ukaizo without help of any of the factions.

If you don't want to work with any of the factions (variant 1) then be sure that your ship is upgraded (sails and hull) and has well-trained crew. This means that you will have to spend a lot of gold. However, you won't have to complete final quests for any of the factions.

If you want to ally yourself with one of the factions (variants 2-5) then you have to complete all of their starting quests (they have separate tabs in your journal). After that you must complete 1 or 2 final quests of that particular faction. These missions become available only after starting The Coming Storm main quest.

Note - Completing a final quest/quests for one faction cancels all other final quests for the remaining factions. You can travel on Ukaizo only with one faction. Also, it is possible that one of the final quests can require you to, e.g. kill a leader of an opposing faction or you may be asked to confront representants of other groups.

Additional preparations before travelling on Ukaizo

Besides making a decision on cooperating (or not) with one of the main factions, you should also take care of a few other things before you go on Ukaizo. Note - Complete positions 1, 2 and 3 in advance if you have decided to work with one of the factions. During a final quest/quests you can be forced to participate in a challenging fight or fights. It is better to command a powerful and well-rested party.