On the page there is a description of the passage of the side quest A Shrewd Proposition in the game Pillars of Eternity 2: Deadfire. This is one of the more extensive optional missions associated with the Principi faction. As part of completing it, you can do a series of activities for one of the two hostile captains.

Meetings with captains and reaching the Crookspur Island 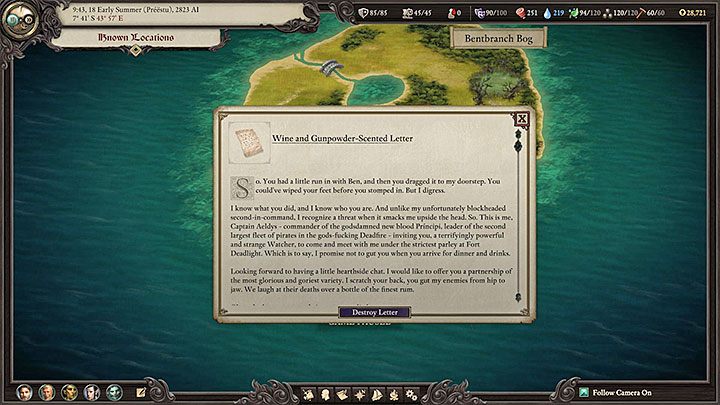 You must meet Captain Furrante in the Balefire Beacon on Dunnage (M36,10) as part of completing the Death symbols quest (for a description on Side quests in Dunnage chapter). During the conversation with Captain Furrante, you will learn that he wants you to help slave traders.

Soon after leaving Dunnage, you will receive a letter about the smell of wine and gunpowder from the picture above. You can return to Fort Deadlight to meet captain Aeldys - you will find her in the command room (M34,17). Aeldys wants to thwart Furrante's plans by freeing slaves and unlocks this alternative way of completing the quest.

In both cases, you must go to Crookspur Island. Only after arriving at her, you should decide how to behave.

Variant 1 - Carrying out actions in the mind of Captain Furrante 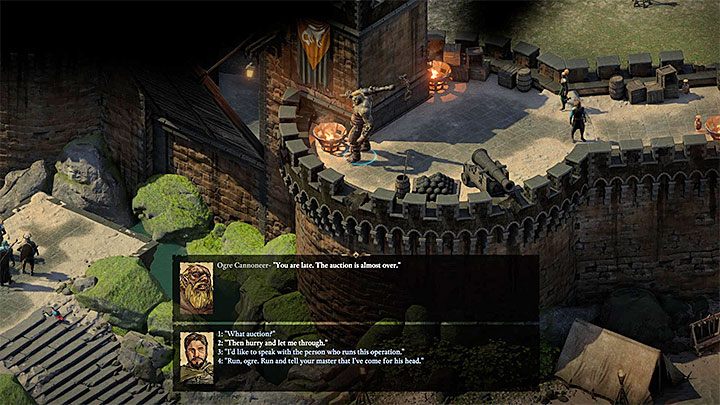 If you want to please Captain Furrante, you have to ally yourself with slavers. Once you reach Crookspur Island, head towards the abandoned gate (M37,4). An ogre will stop you there. It is best to express your willingness to participate in the slave auction, thanks to which he will leave the bridge without any additional problems. Choosing a different variant of behavior may force, for example, the necessity to prove Agility or completely block the possibility of entering the fort.

You will reach the auction square (M37,9). If you don't want to upset slave hunters, don't talk at all or bid one of the slaves - you can win the auction if you raise to at least 1200 gold. Talk to the Auctioneer Marcca, who will send you to Master Kuy. 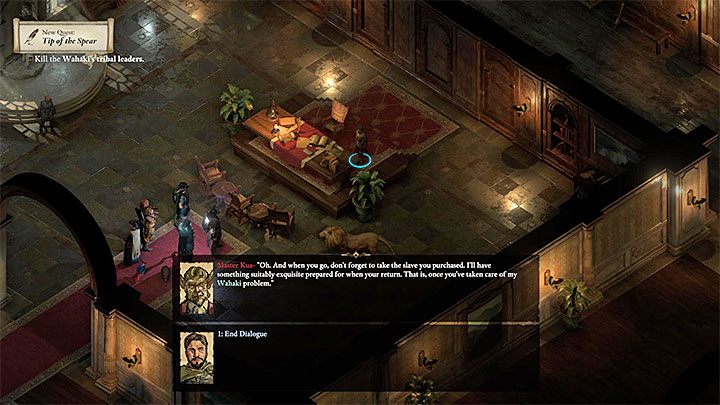 Now you can use the main entrance to the fort (M37,11). Captain Kuy is in his office (M37,13). You can give him the amount for which you sold the slave (joins your ship's crew) or immediately talk about the arrival of the island, at the request of Captain Furrante. Captain Kuy wants the hero to kill the Wahaki tribe leaders who inhabit the island of Ori o Koiki - you will receive the quest Tip of the Spear - his description of the passage is in the chapter about Crookspur Island.

After completing the Tip of the Spear mission, return to Captain Furrante. The captain will be pleased. You will receive a lot of positive reputation for the Principi faction, 2,500 gold and the unique Fleetbreaker.

Option 2 - Carrying out actions in a way Captain Aeldys 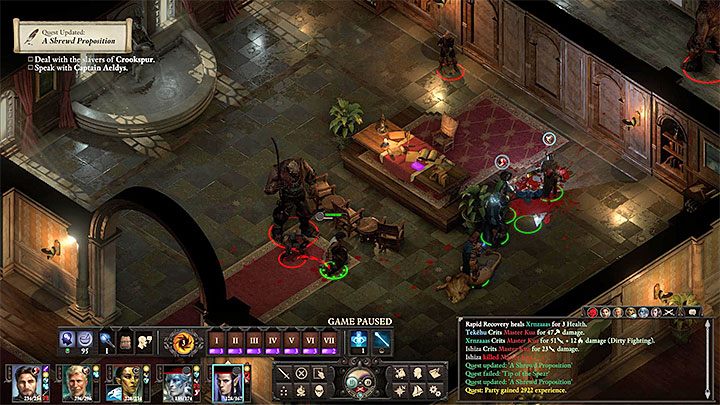 If you want to please Captain Aeldys, then you must prevent the slavers from continuing to trade in slaves. Once you get to the Crookspur Island, start by meeting on the beach with Seafol (M37,1), with which you can talk about slaves. You will find out that she will save all people who reach the beach.

Theoretically, you could now repeat all the steps from variant 1 that will lead to a meeting with Captain Kuy (M37,13). You could then use the opportunity to murder him, which is a fully optional mission goal. If, after all, you want to kill this character, then you have to reckon with the fact that apart from Kuy, slavers, ogres and a lion from the main fort building would also be to eliminating. 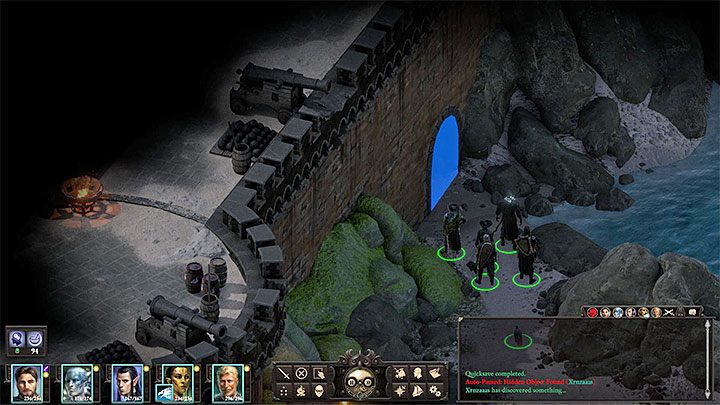 Your priority should be to save the slaves and for this you must reach the dungeons under the fort. The best way to accomplish this plan is to go through the flooded cave - the entrance to it, is located on the beach (picture above) (M37,3). A paragraph scene will join, during it, decide to sail towards the lighter tunnel (dark tunnel is a dead end). You will reach the sea cave (M37,5).

In the cave, there are crystal-eating spiders and the most of them are in the nest (M37,6), where you will also meet the queen. You can fight spiders (have an antidote at the ready because they can poison the team) or sneak past them. Ultimately, you have to reach a closed gate in the cave (M37,7), which you can open in many ways - use a crowbar, pass a skill test (eg Force) or eg use a spell with a corrosive effect. After opening the gate, reach the entrance to the dungeon (M37,8).

Other descents to the dungeon are already in the main part of the fort, specifically on the auction square (M37,10) and inside the fort (M37,12). Each of these passages is guarded by a slaver. You have to take into account the risk of starting fights or attempt to sneak past the guard. 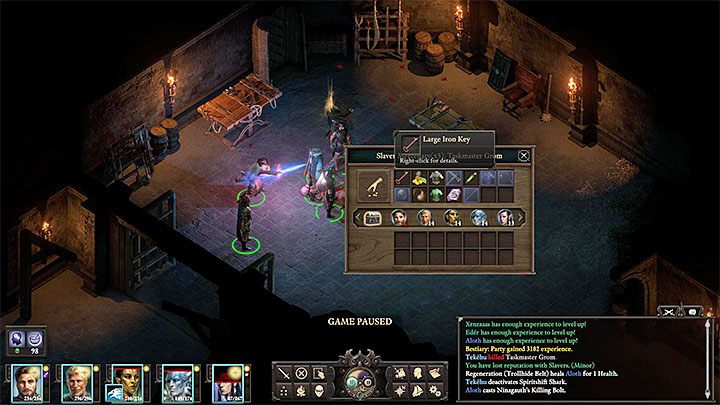 Slaves are kept in two different cells in the dungeons - in the south (M37,14) and in the eastern (M37,17) parts of the map. In the case of Wahaka's cell, you can talk to Bauha (note - if you approach the cell, attack the hero - you can defend yourself with the Force test). You can open the cell by relying on Mechanics or winning a key. In the latter case, you must reach the torture chamber in the northern part of the dungeon (M 37,16). The Grom Overlord, who is the strongest ogre that can be found in the fort, is there. First, deal with weaker slavers, and when attacking Grom, keep the weaker teammates away from him and use the fact that he is sensitive to dexterity. The supervisor leaves behind a large iron key (picture above).

After the release of each group of slaves, the conversation will start. It's the best to recommend them, using the passage through the sea cave. Bauha will by default want to attack slave hunters. You can let her (and even join her), but in this situation, some natives may die. If you don't want any of the prisoners killed, use Intimidate 10 or Survival 8 to induce Bauha to change his mind and escape from the fort.

Return to your ship and reach Fort Deadlight to meet Captain Aeldys. The captain will be happy. You will receive a lot of positive reputation for the Principi faction, 2,500 gold and the unique Blackblade's Hood.