This page contains walkthroughs for optional quests available on Sayuka island. Try to complete them because they can give you a lot of XP, various rewards and improve your relationships with certain characters or factions found on this island.

How to unlock: The quest starts automatically after druids' attack on the town (M35,4). 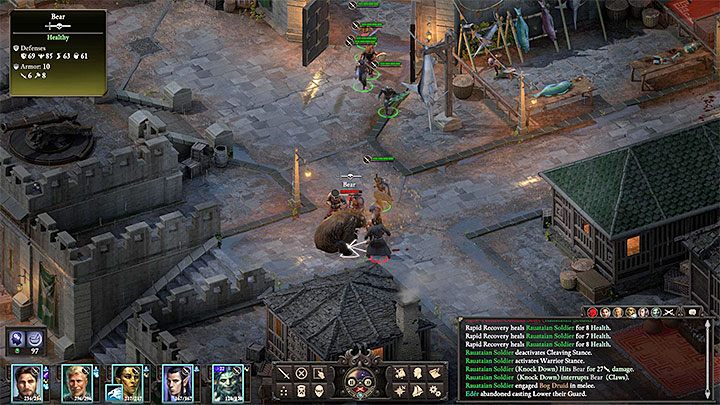 You should get notified about the attack during your exploration of the town. In our case, the attack took place after we have left the workshop (M35,5). Bog Druids, accompanied by wild animals (boars, a bear and tigers) will appear in the town's center (M35,4). Join the fight and focus your attacks on the druids. Luckily, you don't have to protect citizens - only the "nameless" guards can die during this battle. Secure the map to complete the objective.

Reach the Fleet Master's Office (M35,3) and speak with Fleet Master Okaya. You can start a quest to eliminate druids that reside on the island. Leave the town and head to the northern Bentbranch Bog. 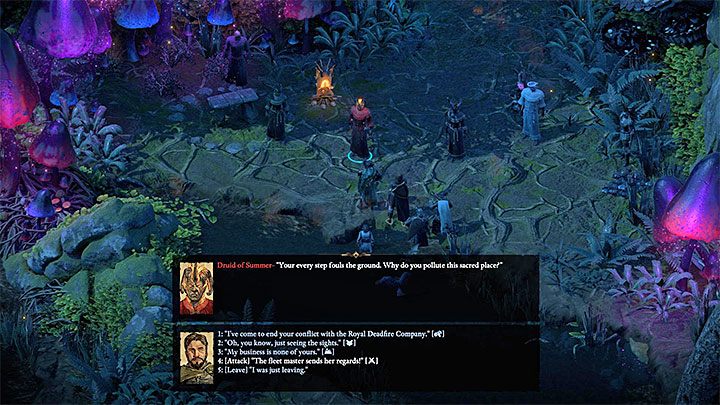 You start in the south-west corner of the bog (M35,8). Your goal is to reach the north-east corner (M35,11). The passage on the south (M35,9) is guarded by a whole group of Assassin Vines accompanied by a Delemgan Vincaller. Going north (M35,10) means that you will have to defeat a powerful Bog Lurker, a few Bog Druids, Sporelings and a Dank Spore.

Go to the Druid Circle. Your targets are Druid of Spring, Druid of Summer, Druid of Autumn and Druid of Winter. Use stealth to get closer to them (swamps slow down your party). During the conversation you an act in two ways:

Go back to Fleet Master Okaya. Her reaction depends on your choices. You can receive a unique Xefa's Empirical Explication blunderbuss, a concussion bomb, grenades and stun bombs.

How to unlock: Speak with fleet captain Okaya (M35,3) after completing A Matter of Import (M23) quest for the Royal Deadfire Company Flag. 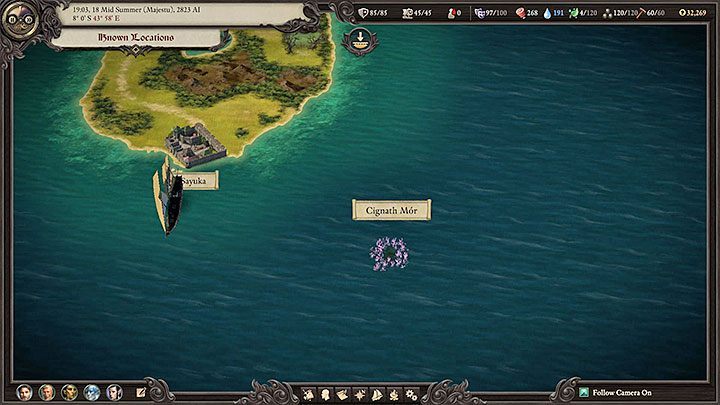 Meet with Okaya after delivering the shipment of goods in the A Matter of Import side quest. You will learn about the problem of coral overgrowth in Sayuka port and you will be asked to find the source of the anomaly. Head to the workshop (M35,5) and speak with Iveera and Coralmason. You will receive Diving Equipment and will be asked to explore the nearby ruins.

Leave Sayuka. Your destination is the underwater ruins of Cignath Mór, shown on the above screenshot - the ruins will appear next to the island. Once there, agree to use the diving equipment and you will be transported to the ruins (M39,1). 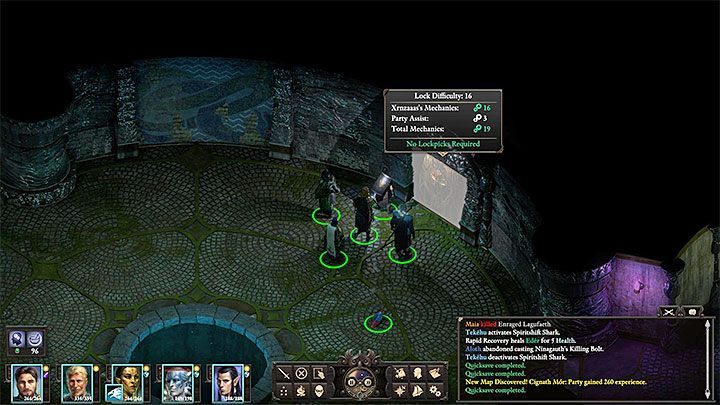 In the room with the container (M39,2) you will stumble upon the first Lagufaeth. Those are not dangerous, but if you want to you can still avoid contact with the help of stealth. Reach the stairs (M39,3) leading to the proper part of the underwater ruins.

Your task here is to reach the northern room with the engwithan machine (M39,6). The doors leading to the room are closed - you can use Mechanics 16 (or a little lower with the help of lockpicks) or reach the southern chest with the Underwater Dungeon Key (M39,5). However, near the chest you will also find a group of Lagufaeth and a more powerful Sea Troll (try to prevent those monsters from regenerating health). When you reach the engwithan machine, examine it and wait for a conversation with the god Galawain to initiate. This encounter can lead to two different endings. 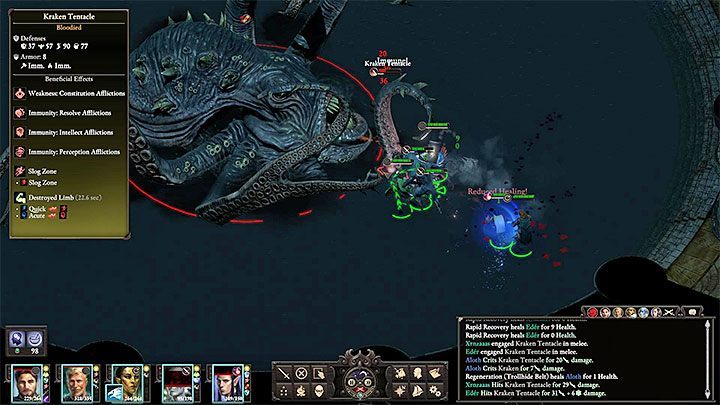 The first option is to refuse Galawain and turn off the engwithan machine (one of the dialogue options during the conversation). You will infuriate the god, causing a Kraken to appear later in the location, in the room with the container (M39,2). Aside from the main enemy, you can also attack its tentacles - this is generally a good idea, as those are quite vulnerable and tentacles will not regrow. Kraken is invulnerable to Resolve, Intellect and Perception status effects. Additionally, remember to keep it away from weaker members of the team. Make use of the Kraken's vulnerability to Condition status effects. Note - the encounter takes place in a partially flooded area. Restrict movements of party members to minimum, as they will be severely slowed here.

Once killed, the Kraken drops, above all else, a unique head gear called Mask of the Grotto Deep (+2 Intellect, +2 Power Levels for all Poison keyword abilities, melee weapon attacks from stealth apply Raw Damage over time to the target, unlocks ability Toxic Coils). Once you have killed the Kraken, leave the ruins and head back to Sayuka. Fleet captain Okaya will be pleased. You will receive 1,800 gold and large amount of positive reputation with the Royal Deadfire Company Flag. Additionally, Clearing Out Crookspur quest will be unlocked. 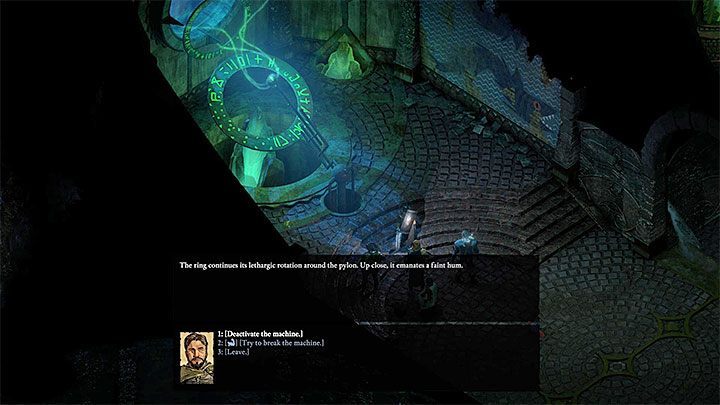 The second option is to comply to Galawain's request. You need to locate three pylons scattered around the entire ruins (M39,7). Interact with them and turn each one of them off.

Sabotaging the pylons will lead to a sudden flooding of the temple. This means that you will not be able to come back here in the later part of the game. Additionally, you will need to play through a paragraph scene of retreat - the main character must pass the Athletics test to prevent injury. Head back to Sayuka. Fleet Captain Okaya will be furious. You will receive only 600 gold and you will lose reputation with the Royal Deadfire Company Flag "regain" some of the reputation if you select the Diplomacy 8 dialogue option. Additionally, Clearing Out Crookspur quest will be unlocked.

How to unlock: Speak with Fleet captain Okaya (M35,3) after completing the Overgrowth quest for the Royal Deadfire Company Flag. 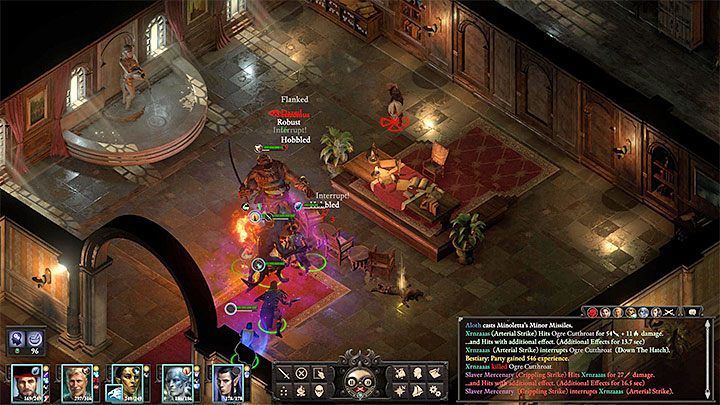 Okaya will tell you that you need to meet Atsura. Head back to the Imperial Headquarters in Neketaka (M23,6). The Royal Deadfire Company Flag wants to get rid of the slave hunters inhabiting the Picer Island. Information on reaching and infiltrating the Island can be found in A Shrew Proposition chapter of this guide, as well as on the page with map M37. As a reminder, you can:

Once Master Kue is dead and the slaves are free, head back to Atsura. You will receive a large amount of gold and positive reputation with the Royal Deadfire Company Flag.