This page contains walkthrough for The Shadows Under Neketaka side quest found in Pillars of Eternity 2 Deadfire. This is one of the more complex Huana faction quests. It can only be unlocked after making enough progress in the main storyline. Your objective is to visit Watershapers Guild in Neketaka town. During this quest you will have to defeat a few monsters, solve a puzzle and meet a dragon (this encounter can end peacefully or it can lead to a fight). 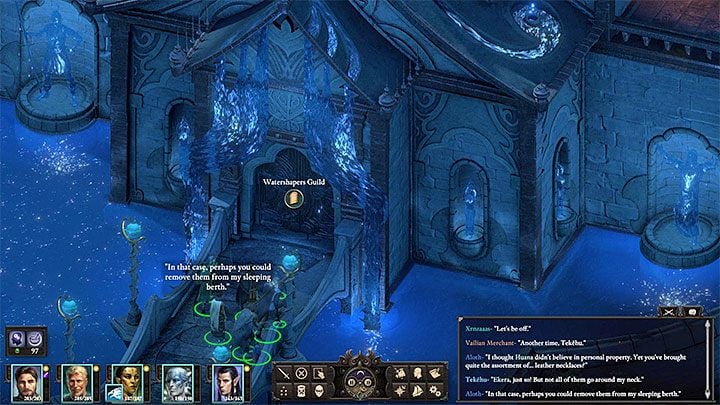 A small quest, From the Wreckage, precedes this one. The goal of that quest is to give Queen Onekaza II your report from the visit on Hasongo island (this happens during A Distant Light main quest). The queen can be found on the rooftop of Kahanga Palace in Neketaka (M25,8). She orders you to investigate the reason behind the lack of contact with Watershapers Guild.

Watershapers Guild is located in Periki's Overlook district (M15,1). After reaching that place you discover numerous corpses of Watershapers and Coral Nagas (they are behind the attack on the guild). Reach the stairs that lead to the guild ruins (M33,4). Ekenu can be found here - speak with him or go down to the ruins.

Exploration of the Watershapers Guild 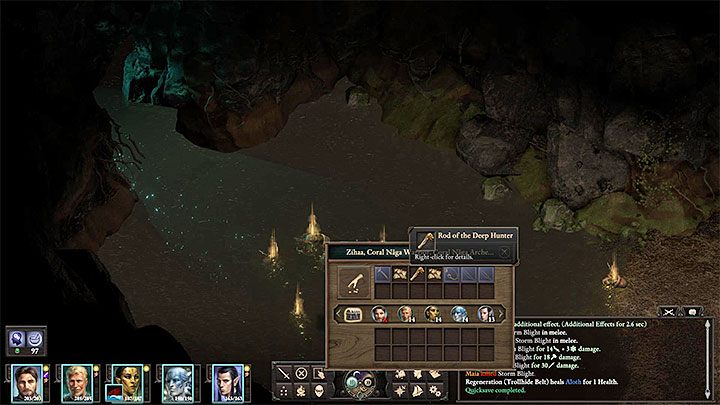 The stone door (M33,5) can be examined immediately. You can determine that the doors aren't easy to open, even if you don't use Perception 15. Head to Periki's Tomb (M33,6) and deal with a few Coral Nagas (remember to quickly destroy Totems because they can summon additional enemies). Speak with heavily wounded Guildmaster Mairu in the tomb. The woman will die. After that you can speak with her soul. You learn the words for "Periki's Devotion". Soon, you will come across a puzzle tied to these words.

Reach the grotto (M33,8) and defeat more enemies. The most important enemy to kill is one of the Nagas, Zihaa. Search its corpse and take Rod of the Deep Hunter.

The solution to the puzzle found in the guild ruins 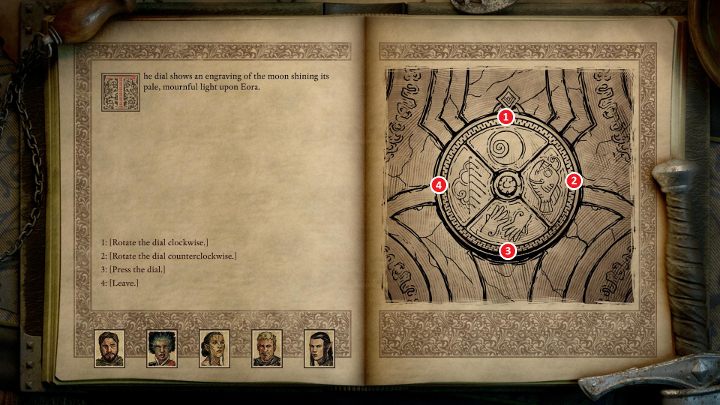 Go back to the stone door (M33,5). Save your progress - soon, you will have to make an important decision. The goal of this scripted interaction is to solve the puzzle. Use the recently acquired Rod and the words of "Periki's Devotion". The dial on the right has four symbols:

Use the dialog lines to rotate the dial (clockwise or counter-clockwise) and press the symbols by using dialog options. After using "Press the dial" option the game will press only the symbol that is currently on the top (the picture 1 shows this situation - here we pressed the Moon symbol).

Open the door by pressing the symbols in the following order: Ngati, Moon, Rain, Hands. This unlocks the entrance. The passageway leads to Scoyrielaphas' Prison (M33,9).

Additional note - Rod of the Deep Hunter is an interesting weapon for a Wizard so don't forget to put it back into your inventory once you open the door. This two-handed staff deals 22-36 damage and has additional effects: +30% Damage, +8 Accuracy, +2 Penetration, -1 Deflection and +5% Recovery Time for 45 seconds per hit.

Encounter with the dragon and choosing the ending of the quest

Entering the prison initiates a conversation with a dragon called Scoyrielaphas. The conversation can go in a few different ways and you can unlock one of the three possible endings. 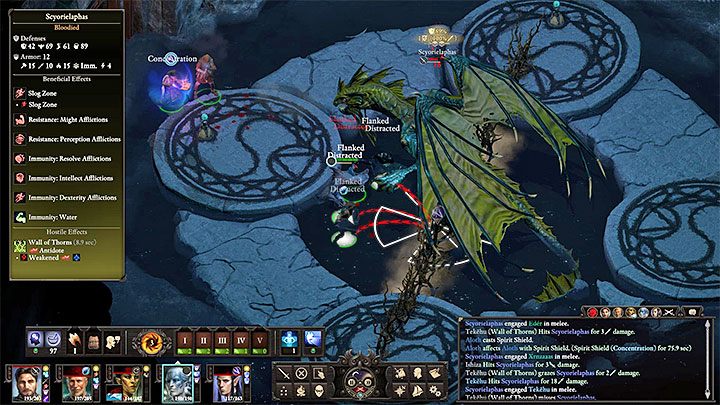 Killing Scoyrielaphas is the first ending. Obviously, this is a very powerful enemy that can be treated as a boss. Try to have your party at level 12-13 before you face this dragon. Scoyrielaphas, just like any other dragon, can breathe fire. The small domes on the arena can protect you from this attack. Keep your weaker party members inside of them and order stronger and more resistant characters to attack the dragon.

Scoyrielaphas is immune to Water and Dexterity, Intellect and Resolve afflictions. The dragon is also resistant to Might and Perception afflictions. Also, Water Whips can appear during the fight. Hide inside the domes to protect your party members from them (+20 to water damage resistance) and focus on attacking the dragon.

The dragon gives up after it gets weakened. You can continue the fight and kill it. Search its corpse (rare crafting materials). Go back to Queen Onekaza II. She is infuriated that the dragon is dead (you can also try to lie to her). This decision has a huge negative impact on your relation with Huana faction. However, you should still be able to receive a new quest, Fruitful Alliance. 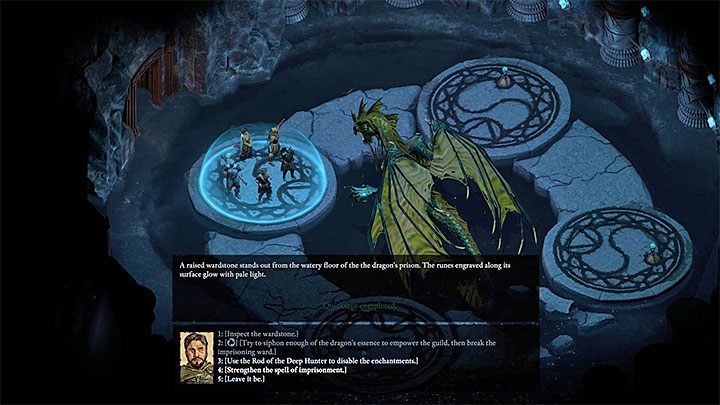 The second ending happens when you decide to imprison Scoyrielaphas again. You can trick the dragon by telling him that you want to set him free. Then, you have to start examining the device responsible for magic domes. Choose the dialog lines that allow you to strengthen the imprisonment spell. The dragon will attack your party after using one or two of these options. Weaken him - the dragon will give up. After that you can continue strengthening the spell. Thanks to that you will imprison the dragon for good.

Go back to Queen Onekaza II. She is very happy with how the events have turned out - this gives you a lot of positive Huana reputation points. You also unlock a new quest, Fruitful Alliance. 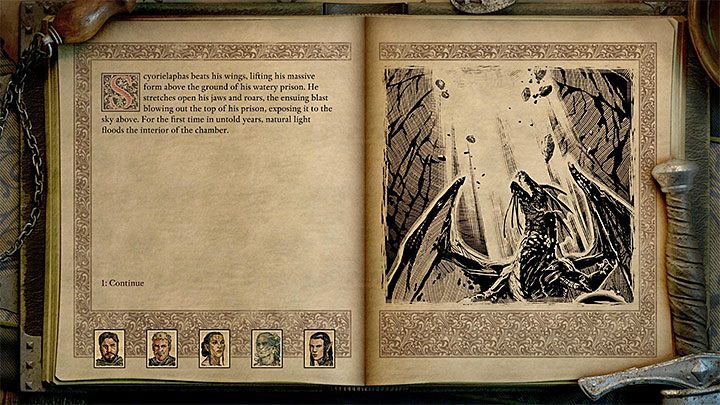 The third ending is about letting Scoyrielaphas free. Tell the dragon about your peaceful intentions and promise him that you will set him free (you can also read his soul). Then, you have to approach every device that creates magic domes. Choose the option that allows you to use the Rod of the Deep Hunter - this gets rid of the imprisonment spell that keeps Scoyrielaphas from leaving. Sabotage all four devices to free the dragon.

Go back to Queen Onekaza II. She is infuriated that the dragon is free. This decision has a huge negative impact on your relation with Huana faction. However, you should still be able to receive a new quest, Fruitful Alliance.