This page contains a walkthrough for The Archmage's Vault - a side quest found in Pillars of Eternity 2: Deadfire. The quest is one of the more complex side quests and can be taken up during your stay on Neketaka island. The task involves breaking into a manor with the titular vault which contains a certain valuable artifact. The mansion is guarded, but the quest gives us freedom to either eliminate the guards or engage in a stealth approach.

The quest begins with reaching the vicinity of the inaccessible Arkemyr's Manor which is found in Periki's Overlook district in Neketaka (M15,3). Here, you can listen to a conversation between Tumary i Netehe and join it - this will unlock the quest.

Before you begin the heist, you can ask about the manor by talking to Fassina and Ifren from The Dark Cupboard. Ifren can give you more details about a hidden pathway to the manor, provided you pay 500 gold or use Intimidate 4 / Bluff 4. This step is completely optional, as you'll learn more about the hidden pathway by visiting the further part of this chapter.

To access the vault, you'll first have to access the Arkemyr's Vault. You can do so in three different locations at Periki's Overlook. 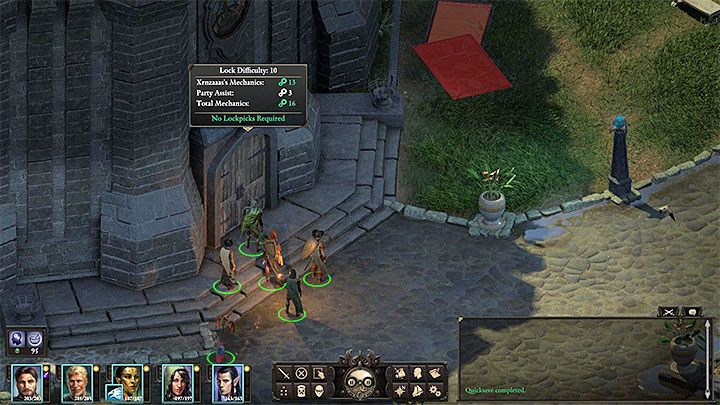 The first way is the most obvious and involves opening the main door to the manor (M15,3). This is a good choice if you are planning to access the household as fast as possible.

The main door can be opened in two ways - first involves utilizing Mechanics 10 (or any mechanics with additional lockpicks) to break the lock. The second method sees you complete a side quest (Velvet Glove, Brass Fist) given to you by Fassina (M15,4) - a walkthrough for the quest can be found in Remaining side quests in Neketaka. It is important to ask for the key during your first conversation with Fassina - you'll be able to receive the key at the end of the quest. If you won't ask about the key, Fassina will give you a different reward. 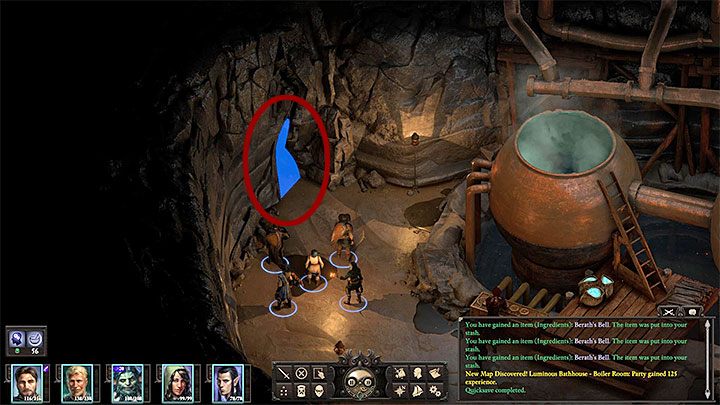 The second method involves using a secret pathway in Luminous Bathhouse (M15,8) (the pathway is mentioned by Ifren). This option is not recommended - even if you are taken directly to the manor's cellars, there is a risk of activating an alarm if you activate the stone wall in a wrong way (M32,14).

Once you enter the Luminous Bathhouse, use the stairs leading to the room with the boiler (M24,5). The secret pathway is found in a location shown in the screenshot above. You'll be subjected to a simple interaction. 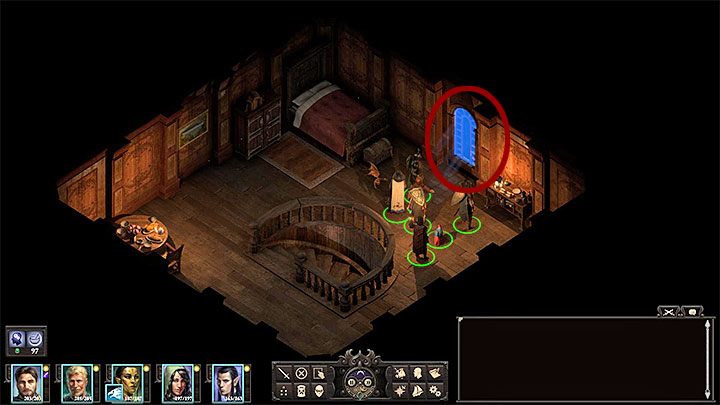 The final, third method is well-hidden and involves planting a rope on the roof of The Dark Cupboard (M15,4). This is a recommended variant if you want to rob the manor without engaging in any battles.

Enter the The Dark Cupboard and use the stairway leading to the first floor. Investigate the window shown in the screenshot above. A scripted interaction will be activated in which you need to use the rope with an anchor to plant the rope and complete an Athletic roll (fortunately, the roll requirements are low). After a successful action, the party will find itself on the roof of Arkemyr's manor (M15,9). You can enter the building right away, or (a better choice) visit the bedroom first (M32,8) to collect two items that are very useful in staying hidden - more details can be found in the further part of the text. 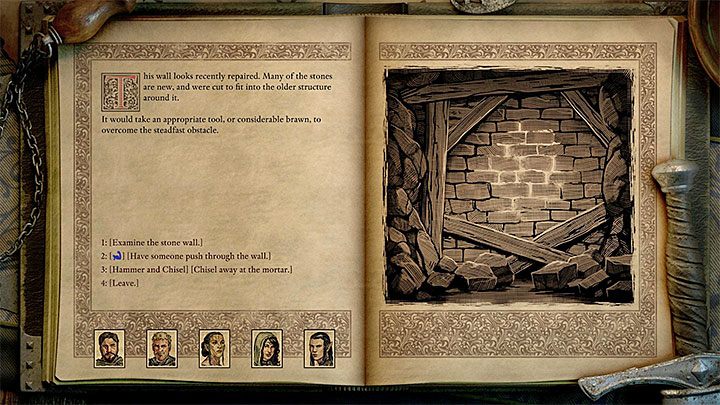 The exploration of Arkemyr's manor begins in the main corridor on the ground floor (M32,1), on the roof (M15,9), or in a small tunnel in the basement (M32,14). The final variant is the most troublesome, as the party quickly encounters a stone wall with an active alarm. You can disable the alarm using Mechanics - if you skip this step or fail the roll, an all-out alarm will be activated throughout the whole mansion. You can destroy the wall using Athletics or take it down using Hammer and chisel.

Searching the manor on "normal rules" involves defeating encountered imps, banes and constructs. The final opponent is the most troublesome of them all. The constructs are very durable and deal a lot of melee damage. During battles, take care of weaker party members, first deal with lesser monsters accompanying the constructs and take care of the robots right after them. If you still having problems during battles, consider revisiting the manor after you ascend to 11-12 experience level. 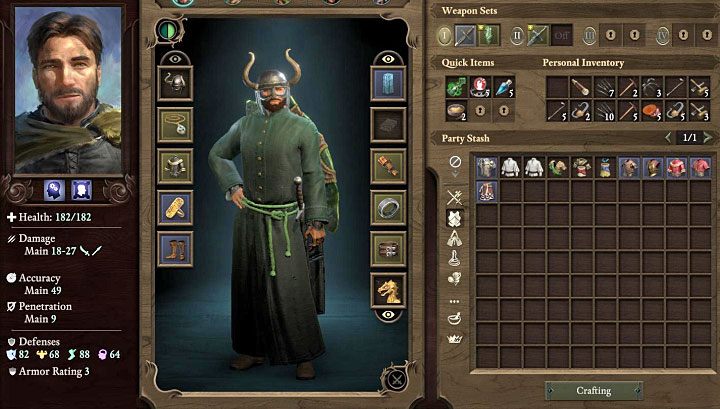 Fortunately, the manor can be explored while staying undetected. If your party members are skilled enough to use the stealth mode, you can use it and utilize a narrow passageway leading to laboratories (M32,14).

Also, there is a better way of staying undetected - you can wear an archmage outfit. In this case, use the rope to access the roof of the mansion (M15,9). Move north-east to find the entrance to Arkemyr's bedroom (M32,9) and pick-up Arkemyr's Old Clothes from the wardrobe. Open the inventory, choose the main character and wear the outfit (replacing the currently used armor - shown in the screenshot above). From now on, you won't be attacked by imps and constructs, even if you find yourself in their vision cone. Note - You don't need to take off other armor elements (e.g. boots or headgear). Moreover, the imps and constructs will ignore the remaining members of the team.

Take Arkemyr's Notes from the desk in the bedroom. Read them, as they contain a password useful when talking to imps (cider and cheese) - you can choose it from the dialogue options available during the conversation.

Items useful when breaking in to the vault 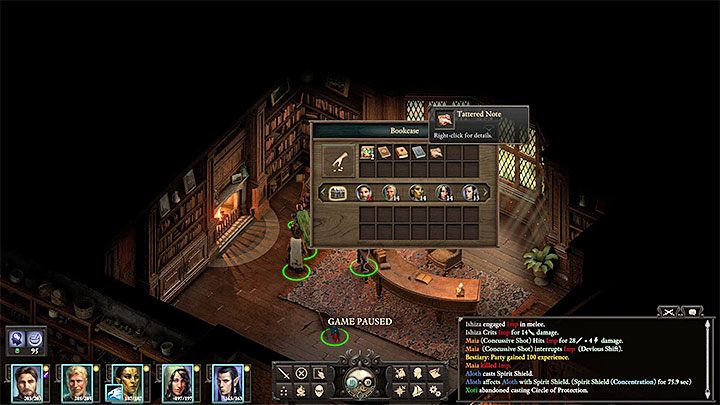 Consider visiting two rooms when attempting to perform the heist. First is the Arkemyr's Study which can be found on the ground floor of the building (M32,4). Inside, you'll encounter an imp who can be killed, deceived during the conversation (Bluff 8 / Diplomacy 9) or simply ignored if you are wearing Arkemyr's robes.

Pick up the Tattered Note and read it right away. 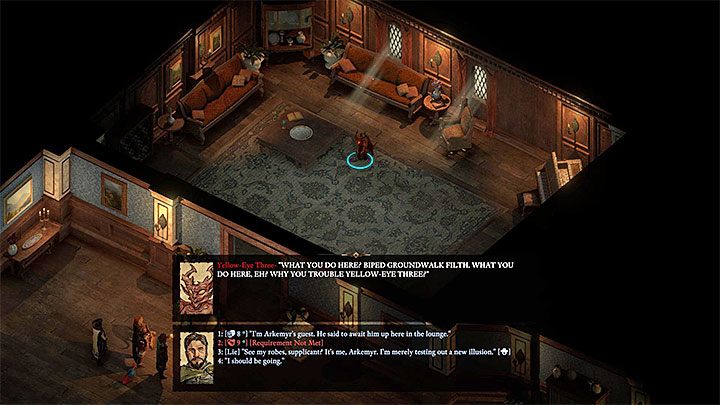 The second room is the lounge found on the ground floor of the manor (M32,8). Inside, you'll encounter an imp (Yellow-Eyed Three) You can attack him, deceive him during the conversation (Bluff 8 / Diplomacy 9) or in the case of wearing archmage robes, convince him that you are the archmage - give him the right password (cider and cheese)

The lounge contains an item - Translucent Crystal - that can be found at the corpse of the killed imp or received from him if you've managed to complete the conversation.

Breaking into the vault 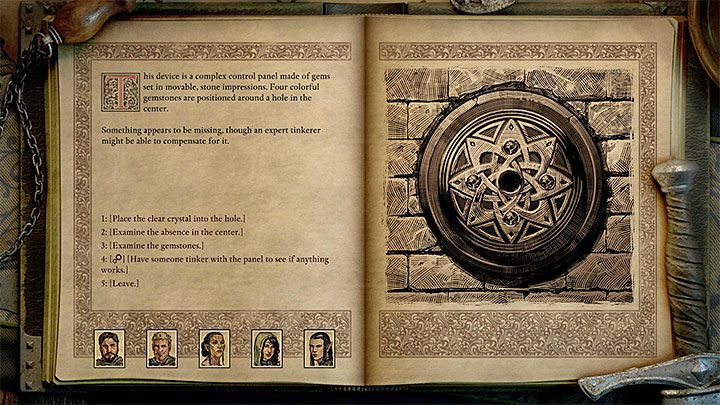 The entrance to the vault is found in the western part of the laboratories (M32,11). You'll need to bypass a complicated lock:

Stealing the tablet and choosing the recipient of the quest 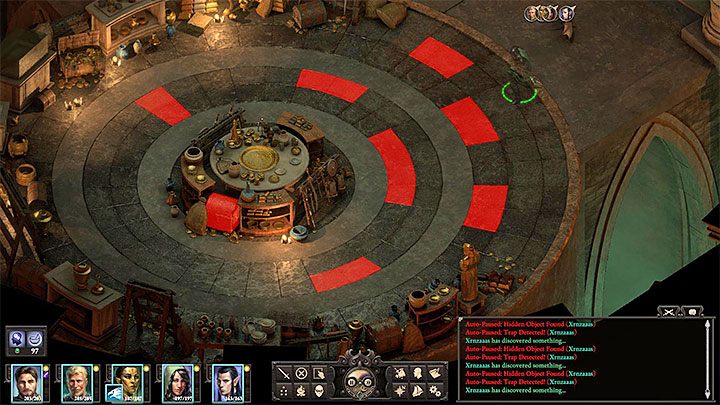 You can enter the Arkemyr's Vault (M32,20) after completing the riddle. Stay cautious, as the room contains a lot of traps which are marked in the screenshot above - you can bypass or defuse them. The sought item is in an open chest found in the southern part of the vault (Harapo Epic).

The tablet can be given to two people:

Each of the conversations will be interrupted by an imp who gives you an invitation for a meeting with the archmage which you've recently stolen from. This will unlock a new side quest - A Cordial Invitation.