This page contains walkthrough for Lost Dues in Good Faith side quest found in Pillars of Eternity 2 Deadfire. This is one of the more complex side quests. You can start it on Neketaka island. During it the main character can visit the Temple of Woedica located on one of the islands in Deadfire Archipelago. Your goal is to find Oswald. 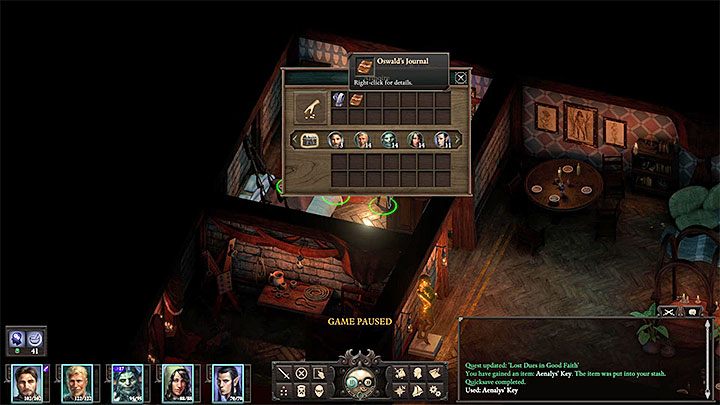 To start this quest, you have to visit The Wild Mare in Queen's Berth on Neketaka island (M11,17). Find Kahn (she should be on the ground floor (M19,1)) and speak with her. You learn that the woman is looking for an Elf called Oswald who still hasn't pay his debt. You can agree with her offer (receive 20% of gold from the debt) or you can negotiate better terms. You don't have try your best here, you won't get a lot of gold for this quest.

Start searching for Oswald by reaching The Wild Mare's upper floor. Go to Aenalys' room (M19,3) and speak with her. There are a few ways of getting information - you can use Diplomacy 4 / Streetwise 3 / Intuition 4, you can bribe her (250 gold), you can steal Aenalys' Key to her wardrobe or you can open it yourself (it has a level 8 lock). The most important thing to do is to check the wardrobe in her room and take Oswald's journal (the picture above). Go back to Kahn with the item. She will give you hints where to look for Oswald.

Reaching the Temple of Woedica 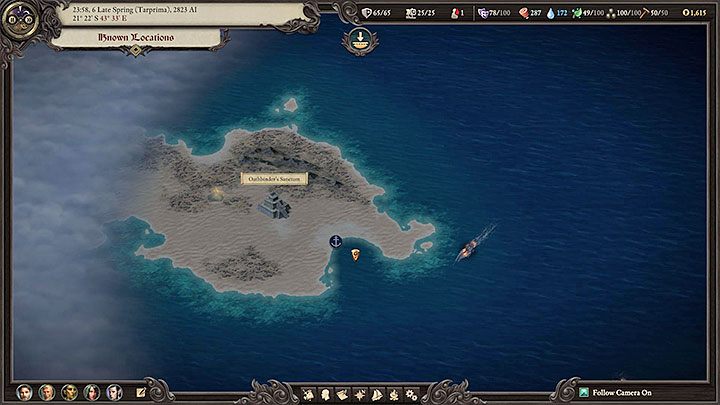 Leave Nekataka island. Go south-west on the world map. The destination is presented in the picture above - this is a small island with Oathbinder's Sanctum. Moor the ship and reach the temple on foot. Climb the pyramid to reach the inside of the Temple of Woedica. You have to go down to the lowest level.

Reaching the lowest level of the temple 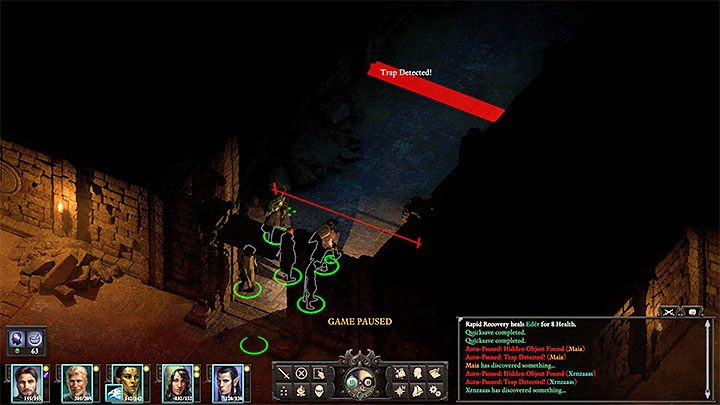 The first level of the sanctuary has only an interactive altar. Use the stairs to go down.

On the second level of the sanctuary your party can be attacked by Shadows. The stairs that lead to the third level are in the western part of the dungeon. Use the lever to unlock passage.

On the third level of the sanctuary you can immediately find a corpse with Bloody Note which informs you about Inquisition. Find another lever (two in total). On the way to the stairs to the fourth floor your party can be attacked by cave beetles (destroy their nests). Said stairs can be found in the eastern part of the dungeon.

The switch on the fourth level of the sanctuary can be found rather fast (it unlocks the room in the north). From now on you should watch out for traps (the first few of them are presented in the picture). Detect them by using a character with highest Perception and disarm them with a character with highest Mechanics. Keep moving north-east and then choose the eastern corridor (with more traps). 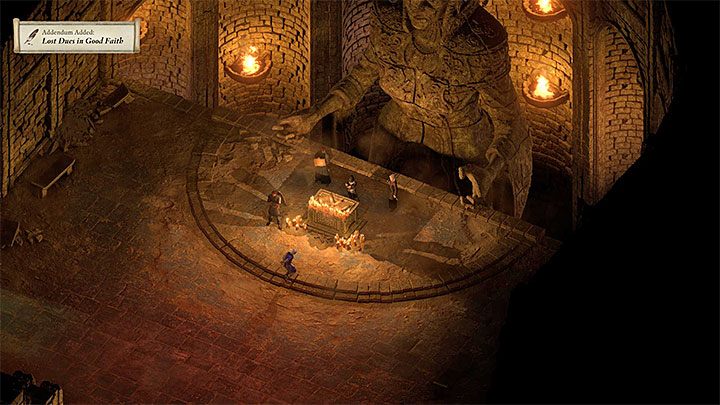 The court room, presented in the picture, is your destination - reach it by following the nearest northern corridor. There, you can find Oswald who is about to be executed by Inquisitor Lodwyn. You can act in a few ways:

Speak with Oswald if he is still alive. Using one of the special dialog options (Intimidation 5 / Diplomacy 6) won't help you get gold for Kahn (Oswald has no money at all). However, he will give you a ring. The most important thing is that you can invite Oswald to join your ship's crew. The best posts for Oswald are either a navigator or a helmsman.

Note - search Inquisitor Lodwyn's corpse (provided she is dead). Among the things that you can find are, e.g. a unique Cowl of the Piercing Gaze (+1 Perception, Religion and Insight).

Go back to Neketaka town and speak with Kahn in The Wild Mare (M19,1). You can tell her that Oswald doesn't have any gold, show her the received ring or give her your own 5,000 gold.