The page contains a walkthrough of the Cornett's Call side quest in Pillars of Eternity 2: Deadfire. This is one of the more complex side quests, which can be started while on the Neketaka Island. The quest requires the protagonist to make a favor for the leader of Neketaka's underground and explore an extensive dungeon system.

Triggering the quest and meeting Dereo 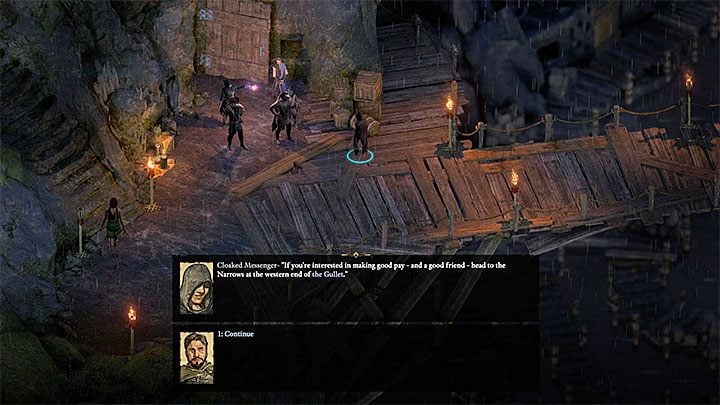 You will be able to begin this quest after spending some time in The Gullet - to be more exact, you have to increase your reputation there by completing other side quests. The team has to be halted by the Cloaked Messenger (the screen above), who will suggest you should meet someone.

The messenger will give you some hints that will help you reach the destination. Go to the Narrows (M12,1) and interact to trigger a paragraph scene. Turn right, then left and again left. When you're halted by bandits, tell them you want to meet Dereo. This will take you to Dereo's quarters. Go to the main room and talk to Dereo the Lean. You can take your first job, which requires you to steal a certain precious artifact - the Cornett of Waves.

Obtaining the Cornett of Waves 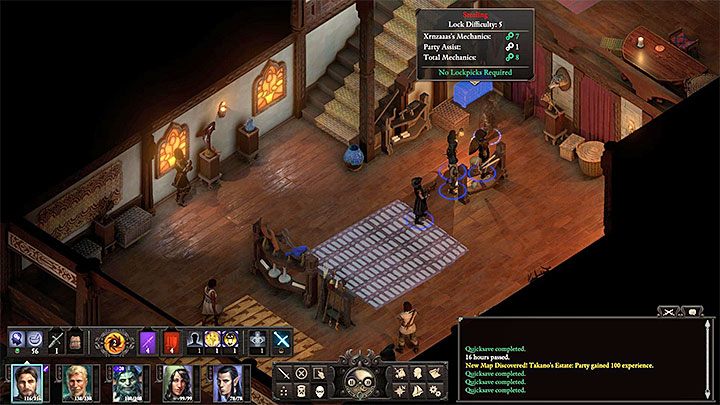 Leave the hideout and The Gullet and load the map of the city. You have to reach the Serpent's Corona. After reaching the place, go to Takano's Estate (M16,1). Get to the back of the estate and investigate the chest from the screen above. You can open it, or - if your Mechanics skills are insufficient - kill Takano or steal the key from him. Take the Cornett of Waves from the container.

Take the Cornett to Dereo's quarters. You will get 300 gold and Dereo will give you another quest - this time in Old City Ruins. Attention - before setting out, use 12 Intellect / 6 Insight to ask Dereo why he's interested in the Old City. 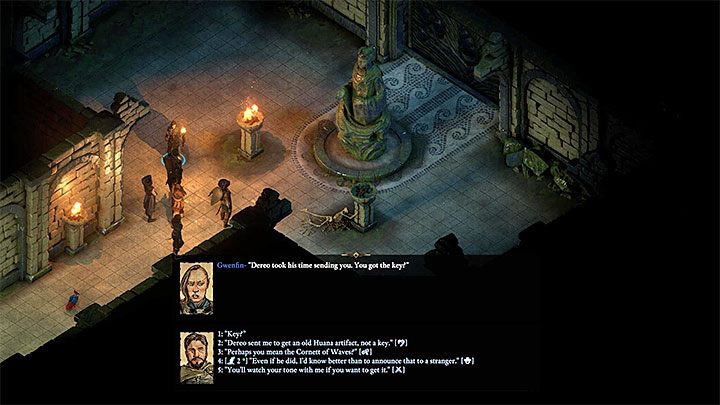 Leave Dereo's hideout and go back to the Delver's Row. Reach the northern corridor of the location (M20,8), which is guarded by bandits. Since you're working for Dereo, they will allow you in. You can use the lift to get to The Gullet (M20,9). Here you can head east. You can walk around The Gullet from the south (anti-clockwise direction of travel) or reach the rope (M20,11) and complete an Athleticism test to reach the other side faster. Reach the Passageway to Ancient Huana Temple (M20,13) and use it.

You will get to the Chamber of Waves in Old City Ruins (M21,1). Talk to Gwenfyn, who's also working for Dereo. Show her the Cornett of Waves and interact with the statue. Place the Cornett in the statue's hand and you will unlock passage further. Talk to Gwenfyn again. Before heading out, use 6 Streetwise to get some payment in advance - 500 gold. 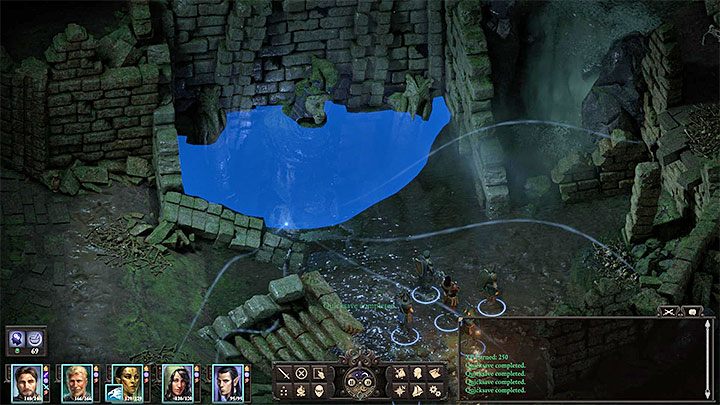 Before you, stands the most extensive dungeon in Tekenaka, but you don't have to explore it all at once. Before entering, your team should be around level 10-11 (to make sure you can take all the monsters there). Also remember to rest and have some supplies with you (potions, scrolls, traps, etc.).

You begin in the Chamber of Waves in Old City Ruins (M21,1). Here are your options: 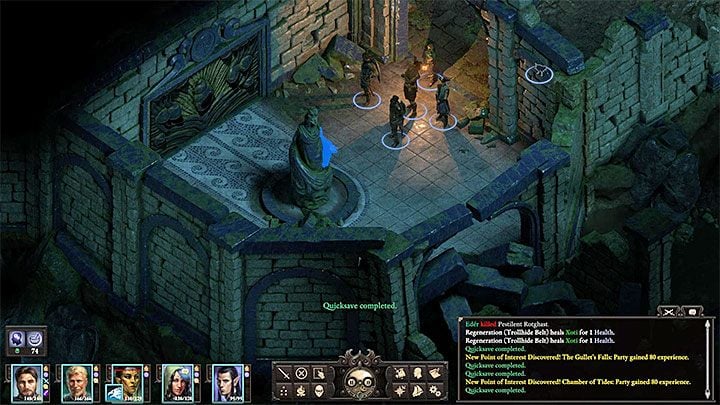 In the Old City you have to be more careful, as the team may run into more powerful enemies, such as shadows, rabid corpse eaters or a mad harvester. You can avoid every fight on your way by bypassing enemies at safe distance or sneaking.

The main target is the Chamber of Tides in the northwest part of the map (M21,17). Just as before - interact with the statue and place the Cornett in its hand. If you have both Cornetts this won't change anything. The Old Ondra's Temple will be open (M21,18). Save the game here!!! 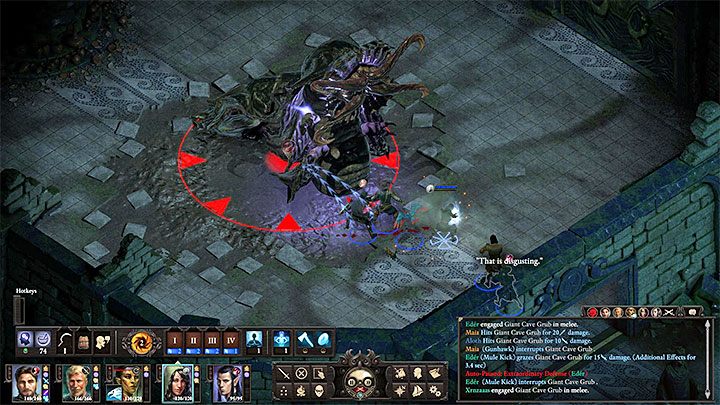 After entering Ondra's Temple, there will appear a Giant Cave Grub. This huge monster is basically a boss. If you want to test your battle abilities with it, prepare for a demanding fight. The monster is stationary, but it has good reach and has distance attacks. The Grub can knock down and grab members of your party and deal huge damage. Smaller grubs will also appear during the fight - kill them only if they really make it harder for you to attack. The Great Gurb is resilient to instances of Might, Dexterity, Resolve and Intellect. The fight with the Giant Grub isn't obligatory, since it's enough to get close to the mosaic to complete the quest. You can simply run away after getting the quest update, or sneak into the room and travel along its edges.

Optionally, you can also explore the secret chamber on the right (M21,19). The door leading there has two slots, which means you need two Cornetts - the one from the very beginning of the quest and the one from Temple Ruins. The secret room contains, among others, the unique shield Cadhu Scalth and the unique halberd of Wahai Porag (careful - one of the tombs has a high level trap!).

In order to finish the quest, go back to Gwenfin (M21,1) and report to her. Then head back to Dereo. Tell him were successful. Again, you can ask the man about the nature of his affair with the Old City (Insight 4 / Bluff 6 / History 7). Dereo will give you a reward - a Kitchen Stove. You can also use Streetwise 4 or Diplomacy 4 and ask for additional payment - 200 gold.