During character creation in Pillars of Eternity 2 Deadfire you'll have to choose between a single class or multiclass character. The same choice will have to be made upon adding companions, remember, this choice is permanent and cannot be undone. 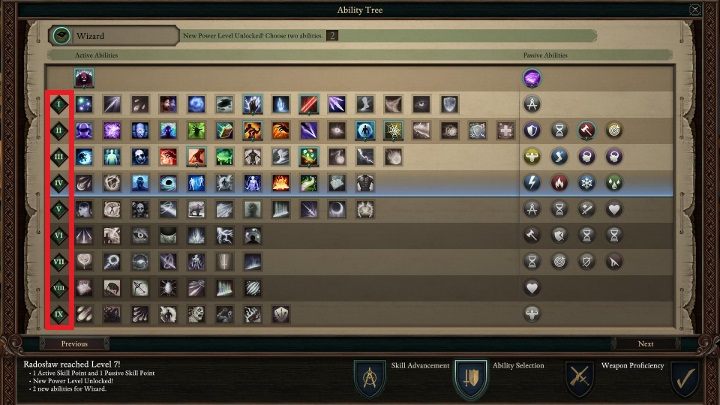 The skills are distributed over nine tiers, but a multiclass character can access only seven of them.

A single class character has access to the skills offered by one class, a multiclass character can access two sets of skills, however they're stripped off the most advanced skills of both chosen classes. Class skills are divided among different tiers (see picture above), this is something like a set of skills, that open up upon reaching a certain character level. The relations are explained in detail in the table below.

As you can observe, the multiclass cannot access VIII and IX tier skills, those are levels containing the most powerful spells and skills. On the other hand a multiclass character is more versatile, you can for example pick a mixture between a mage and a warrior and excel at both melee and ranged combat. You have a wider set of skills to use but this comes with slower progression (in comparison to a single class hero) and the lack of higher level skills. It's important to remember that the stats of a multiclass hero are the average of both classes. For example, one class starts with 48 health points, and the second with 30 health points, a character with those two classes will start the game with 39 health points.

It's impossible to conclude which type of character is better. A multiclass character has slower progression and is more difficult to play with, that's why it's not a recommended choice for newcomers. On the other hand, the additional effort can result in a versatile character that can hold up well under various circumstances. Then again a single class character levels up faster and has access to the most powerful skills, the downside is that this type of character is specialized in one role and has to rely on party members to reach full potential.