The page contains a description of the optional quests in Pillars of Eternity 2: Deadfire, which can be performed on the Port Maje Island. You should make sure you finish all of them, since they yield a lot of XP, different rewards and allow you to improve your relations with other characters and factions.

How to unlock: The quest begins automatically after you reach Vilario's Rest (M1,1). 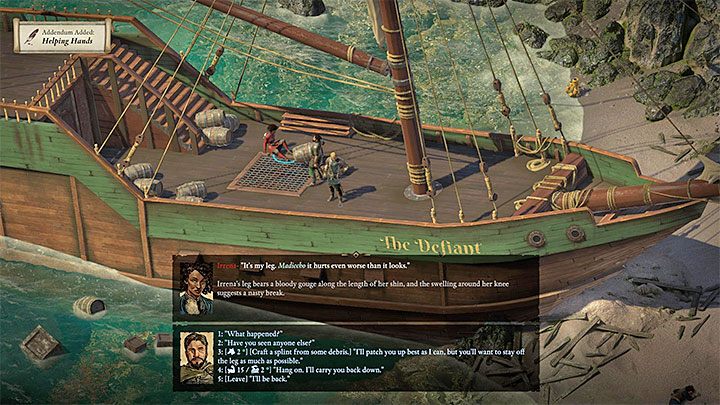 You get this quest after finishing the prologue - you have to find the survivors of the wreckage. You can reach them in any order. Note that some characters may not appear in the locations described below - that's determined by the decisions you make.

Irrena is trapped on the main deck (M1,2). Click on the ship to be able to choose how you want to get in - complete an Athletics test, or use the Rope and Grappling Hook. If you opt for the latter, you have to search the nearby crates first, since the rope and hook are in one of them. After reaching Irrena you can heal her (2 Survival points) or carry her to the beach yourself (15 Might and 2 Athletics required). 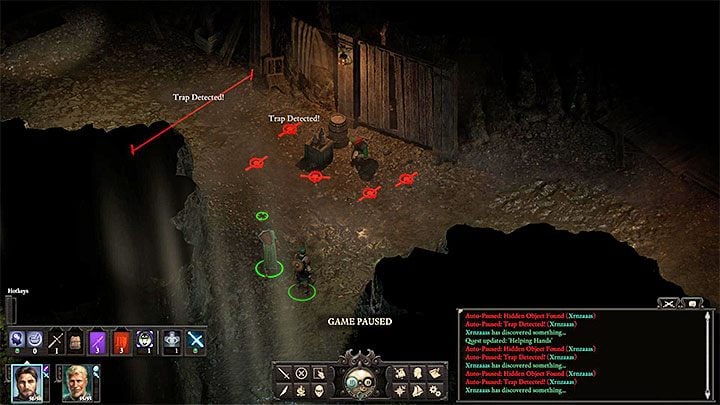 Chitupec is waiting in the northern part of the map, near the Beach Cave (M1,5), but you can only meet him if, during the final stages of the Prologue, you've decided to save his life and sacrifice some of the supplies.

Eld Engrim is standing in the eastern part of the map, near the path leading to the map of the island (M1,4). Talk to him and Vela.

Beodul is in the Cave (M2) which can be reached via the waterfall (M1,5). You have to reach the northern part of the cave (M2,3). You don't have to hurry with approaching Beodul, since there's a great many traps on the way. You'll spot them if your Perception stats are high enough, and disarm them with Mechanics. You can disarm all traps (the best idea) or lead Beodul through a safe path (you need at least 11 Perception) - you can see their layout on the screen above. Additionally, during the conversation, you can also Bluff (at least 2 pints), use Intellect (at least 13 points ) and Sleigh of Hands (at least 2 points).

All the survivors will gather at the camp on the beach (M1,3), but you don't need to meet them all again. 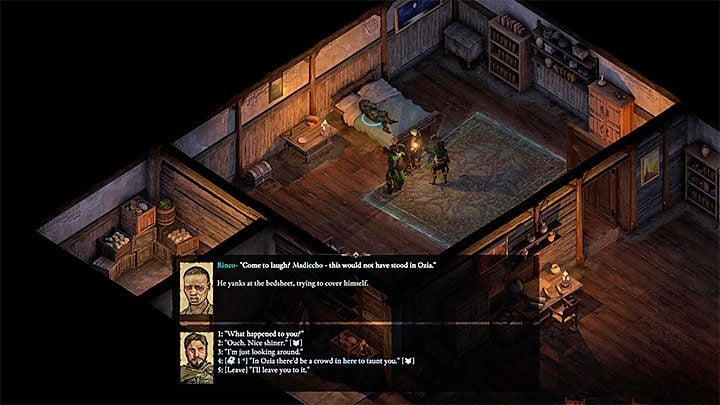 Rinco is going to tell you that he was beaten by Mokeha, a local, during a game of cards, and you will be asked to retrieve the lost gold. Go to the Satahuzi Village (M7), which you can choose from the map in Maje Port. There are two ways in which you can proceed:

The first option is to talk to Ikawha about Mokeha (M7,1). At first, you can use Insight, and then you can suggest that Mokeha should return to Port Maje and answer for the assault - this will be successful if you can use Resolve (14 points), Diplomacy (3 points) or Bluff (3 points).

Attention - If you angry Ikawha, you can damage your reputation with the Huana. 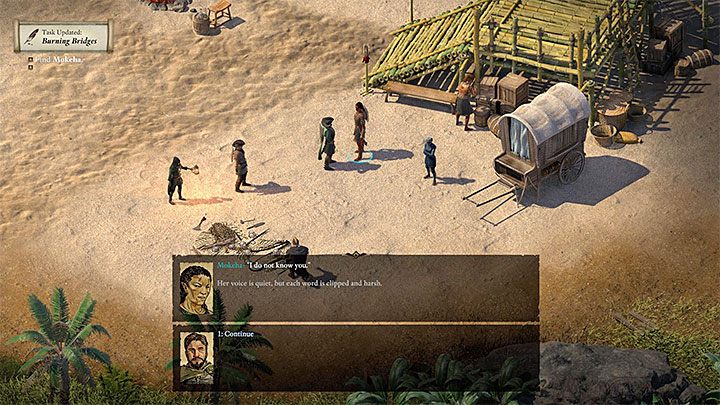 The other way is to meet Mokeha herself. Depending on the time of the day, you will either find her in the hut (M7,2) or walking on the beach. At the very beginning of the conversation, you'll be able to choose unique dialogue options for Aumau, Dwarf or Orlan. The next part of the dialogue is really important, though. You can:

Go back to Rinco if you've convinced Ikahwa to obey the law of Port Maje and denounce Mokeha or if you've retrieved the gold. By default, you will get 1000 gold for completing the quest. Alternatively, you can use Intimidation (2 points) on Rinco and convince him to reveal the entire truth to the governor. 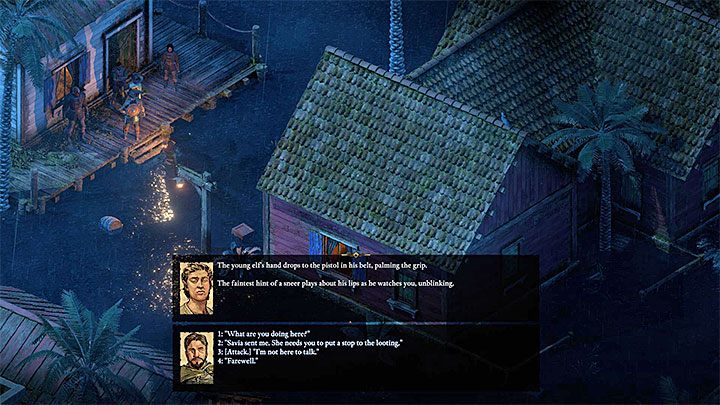 Savia guards the jail and she can give you the quest of dealing with Ilary's gang. Exit the jail, open the city map and go to Gorecci Street (M6). Start exploring the location. Notice that you have limited maneuverability since the street is partially flooded. Also remember that you might have to deal with a group of looters (M6,2). Mind the looter that appears east of the team.

The gang can be found in the western part of the map (M6,3). Talk to Ilary and decide what to do:

How to unlock: Speak with Rum-Dumb Riggere in Port Maje Jail (M3,8). 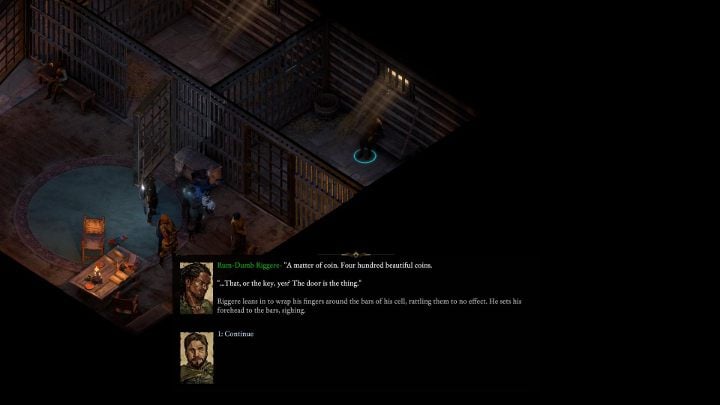 Speak with Rum-Dumb Riggere. He asks you to help him get out of the jail. You can do that in a few ways:

Killing Savia or blowing up the wall won't alarm guards - you can do both of these things without any consequences. 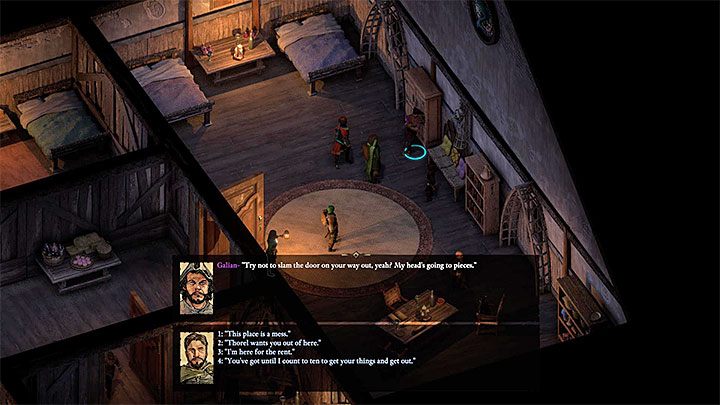 The Kraken's Eye is a tavern in Port Maje Harbor (M4). Thorel, the owner will tell you that there are no free rooms available. You can, however, take from him the quest of throwing Galian and the other sailors out - they're staying in one of the rooms, but refuse to pay. Thorel will give you the Kraken's Eye Room Key.

Go to the first floor and open the eastern room (M4,4). There are two ways to do this:

How to unlock: This quest is triggered automatically after completing the Stranded main quest. 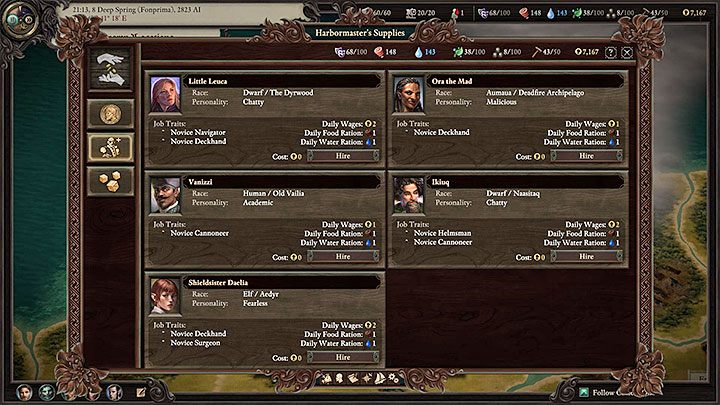 After repairing the ship, you will learn from Steward that you also need to take care of manning the ship - it needs the basic crew to travel safely around the world. You will need to designate five posts on the ship.

How to unlock: The quest will end automatically after finishing the Stranded main quest. 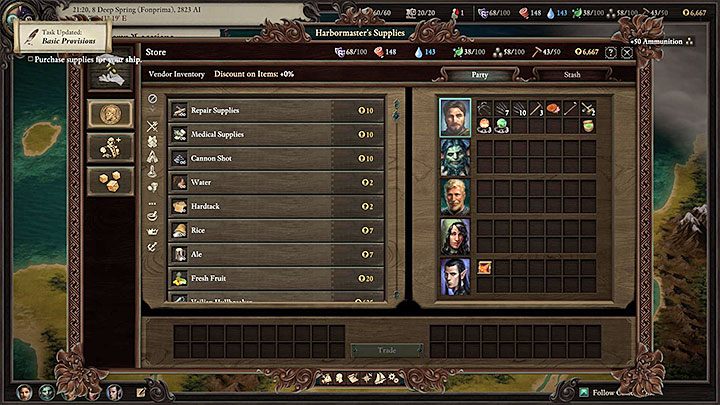 After repairing the ship, you will learn from Steward that you also need to take care of the most vital supplies. You have to get things such as repair tools, cannonballs and medical supplies. Some of these you might have found exploring the island (in containers and chests). In order to get everything you need, visit the City of Port Maje and trade with the Harbormaster.

Of course, provided you have the money, you can also furnish your ship with e.g. better cannons, but that's totally up to