This page provides a walkthrough of the prologue section of Pillars of Eternity 2 Deadfire. The first main quest of the game is very simple and focuses on customizing your characters appearance and skills and selecting the events that took place in the original Pillars of Eternity and its DLC.

Attention - The prologue mainly takes place in the In-Between and on the deck of the Defiant. At the end of the prologue you will get to Port Maje island, where a few more quests can be completed.

Choosing your story and creating a character 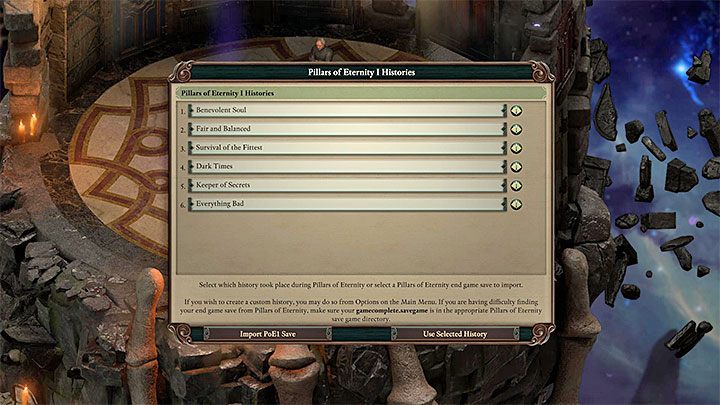 Follow the Purple path to meet with the elderly dwarf. After opening the door find The Pallid Knight. Click on the chair. You have to make a choice regarding the events from the first instalment of the series - you can import save files from the original or choose one of six predefined stories (optionally, you can manually set all the choices to you licking). You can find more information on how to do this under this link: How to import game files (saves) from the original Pillars of Eternity? In the FAQ section of this guide.

Attention - Do not choose the sixth story, it is a collection of all the worst choices that could have been made in the first entry of the game. It's best to take interest in it only after finishing the game at least once in any other way.

Continue conversation and pick one of the dialogue options connected with looking for Eothas. Soon a character creation sheet will open. Among other things, you have to choose a race, a class, skills, a name, and finally, customize your avatar's appearance. You can find more information on the topic at: Character creation in this guide. After creating your own character start your last journey in the In-Between that will lead you to an area inside a ship. Click on the character lying on the bed to return to the world of the living. 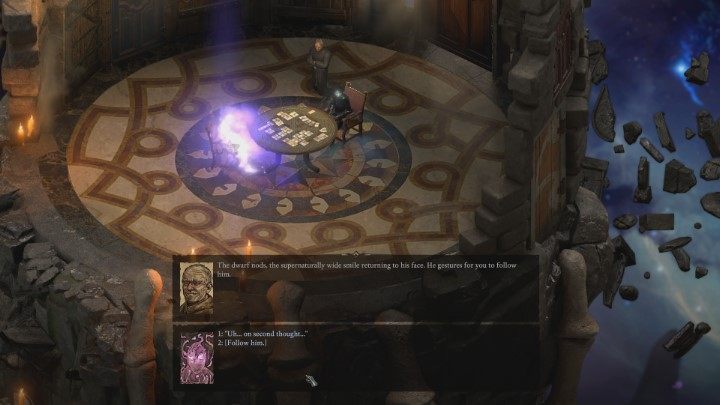 An important piece of information is that the conversation with Pallid Knight may not end well. During the conversation, you may not agree to the offer of the god you are bound with. This becomes possible after you have loaded saved games, or picked one of the predefined stories. At each possible stage of the conversation, reject the possibility to go look for Eothas - this way, you will see the hidden ending and end credits. Of course, this is only a curiosity, because this way, you will miss the entire story, but p[layers who want to see all the endings will be satisfied.

Battle on the ship 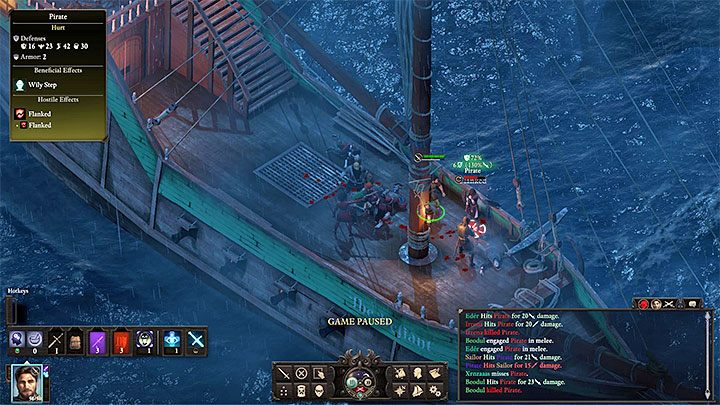 In Captain's Cabin talk to Eder and Steward. Take the basic equipment (the items are different depending upon the previously made choices) and place them in the proper item slots of your character's inventory.

Get up to the main deck. A cutscene with captain Benweth will occur. You can choose different dialogue options, but whatever you do, you will have to face the pirates. You can attack them in any order, but try to Focus your attack on one enemy at the time. If possible, try to find an opening for a flank attack while your enemies are focusing other NPCs. Use a healing potion if your character got seriously injured. 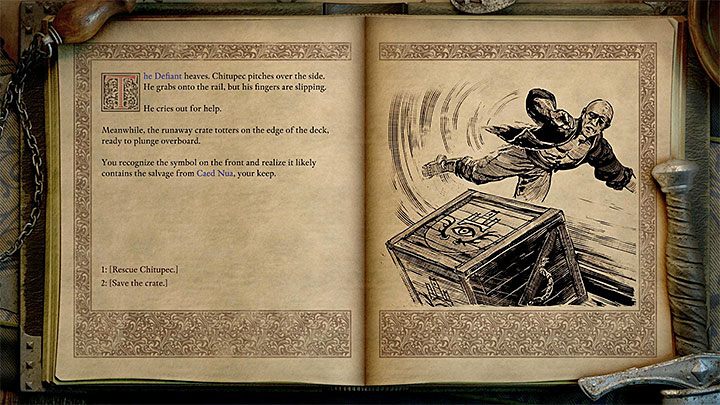 The interactive scene will trigger just after finishing off the last pirate. It features one important choice, that is depicted in the attached screenshot:

In any case, the ship wrecks, and you wake up at Vilario's Rest (M1,1) on Port Maje Island. Two main quests start there: Stranded and To Hunt a God; there's also a side quest: Helpful hands.