TOWN  Paths leading to other districts of Port Maje town.

Podium. After you arrive in the town for the first time you will encounter governer Clario and Ikahwa here. The governor will go to his mansion (M5) and Ikahwa will go to Satahuzi village (M7).

Children of the Dawnstars camp. You can recruit Xoti here (only if she didn't leave for Neketaka yet). Additionally you can talk to Waenglith and ask her for a blessing. You will receive it if you'll pass her trial (full description in the text under the map).

Rinco's house. You can pick up a "Burning Bridges" quest from heavily injured Rinco. There are a lot of containers in the house and you can find a great sword, an arbalest, alchemical ingredients, supplies food and books among other things.

Stairs to governor's estate. Visiting the governor is a part of the "Stranded" main quest.

Market. Henric is a merchant - he's selling clothing, elements of armor, weapons, shileds, potions and scrolls. You can still valuable bracers from the container.

The Kraken's Eye. You can rest in the inn and also complete a side quest. The building has two entrances - lower and upper one. Tuaha can be found near the inn - it's one of the people connected to Maia'a personal quest - "The Courier's Calling".

Port Maje trading post. Alteria is a merchant - she's selling ship supplies and also a rare Death's Maw helmet among other things. The Fishmonger is selling fish (you can steal some from the stands). Additional supplies are in a barrel behind Alteria. There's a hidden stash next to the stairs - it contains the Ring of Unshackling.

Port Maje jail. Savia is guarding the prisoners - you can receive the "Restoring Order" quest from her. Savia carries a key to Riggere's cell (Sleight of Hand lvl 2 is required). Riggere's cell has a lvl 3 lock. There's a hidden stash in the empty northern cell - it has 2 lockpicks.

The map shown in the picture above presents the layout of the location known as the Port Maje Harbor. This is the first city that you will get to visit in Pillars of Eternity 2 Deadfire. To be more specific, it is its largest district. You will not encounter any monsters in this location. You can take on new quests here as well as meet with various merchants. In the camp in the southern part of the map, you can also encounter a character named Xoti, whom you can recruit to your group.

1. The Podium. After arriving in the city, this is where you will meet Governor Clario and Ikahwa for the first time. The governor will go to his estate (M5) and you should follow him there to have a chat with him as part of the Stranded main quest. Ikahwa will go to the village of Satahuzi (M7) and meeting with her is optional.

2. The camp of the Children of the Dawnstars. First of all, you can recruit Xoti (one of the seven existing potential group members) here, but this is only possible if she has not yet set out to travel to Neketaka (Sacred Stair district M14). This may happen if you have previously progressed in the Stranded main quest.

Additionally, you can talk with Waenglith here and ask her for a blessing. You will receive it if you pass her trial. You must first extend your hand and keep it above the fire. Then you have to choose a dialogue option that requires either 3 Religion points (repeating the prayer) or playing with the priest of Berath. The blessing grants you a 50% healing bonus and +2 to Religion.

4. Stairs to the governor's estate. Visiting the Governor is part of the Stranded main quest. Enter the building after you are done with other business in the city. The estate has been described in detail on the M5 map.

7. Port Maje Marketplace. Alteria is a merchant - she sells ship supplies, as well as, among others, the Death's Maw rare helmet.

The fish merchant trades fish (some of which you can steal from the racks).

There are additional supplies in the barrel behind Alteria. Near the stairs, there is a secret stash with the Ring of Unshackling in it.

8. Port Maje Prison. Savia looks after the prisoners - you can pick up the Restoring Order task from her. Savia also has the key to Riggere's cell on her (required level 2 of Sleight of Hand).

Riggere's cell has a level 3 lock on it. In the northern, empty cell there is a secret stash (it can only be detected with sufficiently high Perception) - there are 2 lockpicks in it.

Quests to unlock in the Port Maje Harbor

[Side quests] The Lantern of Gaun - Recruit Xoti to your group and talk to her (M3,2).

Quests that are continued in Port Maje Harbor

[The Hunt for Eothas] To Hunt a God (M1) - Meet with Governor Clario.

[The Hunt for Eothas] Stranded (M1) - Meet with Governor Clario.

Xoti (M3,2) - You can recruit her to your group. The opportunity to convince her to join is available only if she has not left the island yet and has not gone to Neketaka(Sacred Stair district M14).

Waenglith (M3,2) - You can talk about the Children of the Dawnstars with her and ask her for her blessing.

Rinco (M3,3) - You will find him wounded in his house. He will grant you the Burning Bridges task.

Henric (M3,5) - He is one of the merchants - he sells clothing, armour, weapons, shields, potions, and scrolls.

Alteria (M3,7) - She is also one of the merchants - she sells ship supplies and, among others, the Death's Maw rare helmet.

Savia (M3,8) - She watches over the prisoners. You can pick up the Restoring Order task from her.

Other information related to the Port Maje Harbor 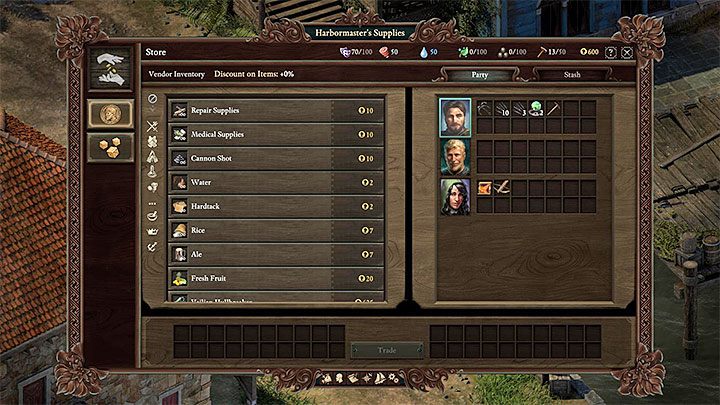 The harbor is one of the three locations that make up the city of Port Maje. After leaving the port, a city map is displayed, from which you can choose your next destination. You can get to Gorecci Street (M6) and Satahuzi village (M7) this way. In addition, when you look at the city map, you can choose to meet the Harbormaster in order to purchase supplies for your ship - the trading window is shown in the picture above.

You will not encounter any enemies at the harbor, however, angering or attacking other people (e.g. Savia, the prison guard) can lead to some unwanted skirmishes.

You can only meet with Xoti from the southern camp if you have not advanced up to a certain point in the main storyline. Otherwise, she will leave Port Maje and will travel to Neketaka. If you still want her to join your group, follow her to this city (you will visit it while completing the later parts of the main story). Xoti can be found in Temple of Gaun in Sacred Stair district (Neketaka (M14,7).

This is the first location in PoE 2 Deadfire where you will encounter traders. In addition to the Harbormaster mentioned earlier, there are also many other salesmen. You can sell unnecessary items to them whenever you wish. In their offer, you will find, among others, some more valuable items, but you do not have to buy them all during your first visit to Port Maje (you can return to this island later on during the game).