A large portion of Pillars of Eternity 2 Deadfire comprises battles, which can prove quite challenging. On your way, you will have to face numerous characters and creatures. Below, you can find a set of the most important information regarding combat: 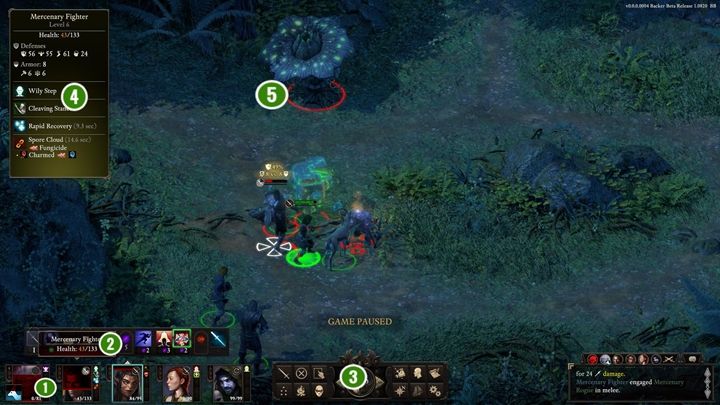 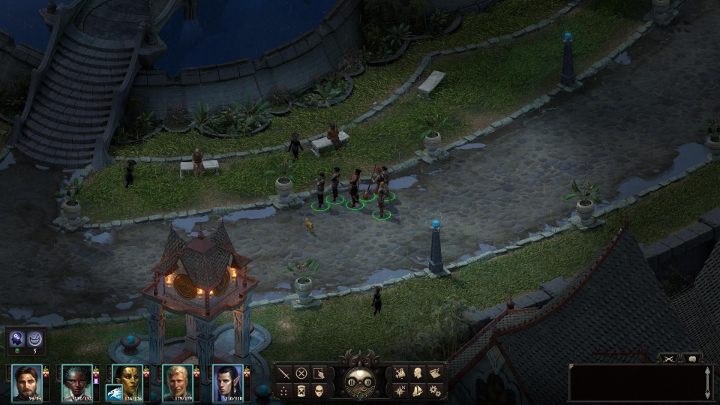 Choose the right companions for the party - combat preparations should start from a scratch. If your team is not well-balanced and universal, you may have problems with harder opponents or large groups of enemies.

The recommended combination for beginners is two short-fought characters, two distance attackers and one support character:

Where can I recruit team members? Visit the FAQ page "How to quickly assemble the party?" . 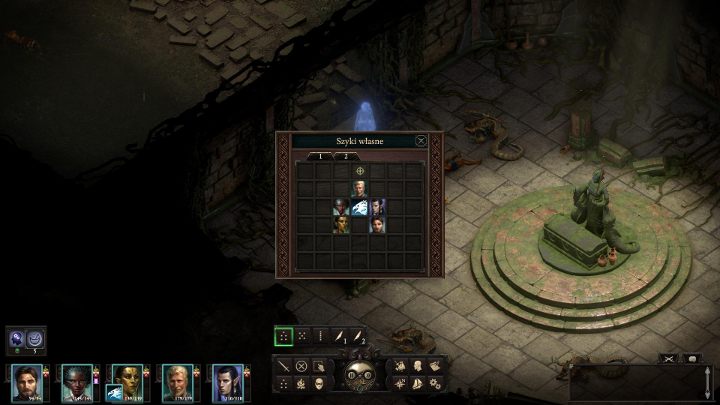 Create your own battle formation - another important issue is to create the right battle formation for your team to move around. A well-chosen formation allows you to lead melee oriented characters together at the front and hide vulnerable ones with less health at the back - this will reduce access to your party members fighting from a distance. Of course, the opponent may surprise you, but the right formation reduces the chance.

How do I create my own formation? Just click on the "Battle Formation" icon in the left zone of the icons of the interface. That will open a window where you can select three basic formation patterns (square, "X" and linear), but the other two slots are for player-defined patterns. Clicking on them will open a window visible in the picture above - here you can set the position of your heroes freely. 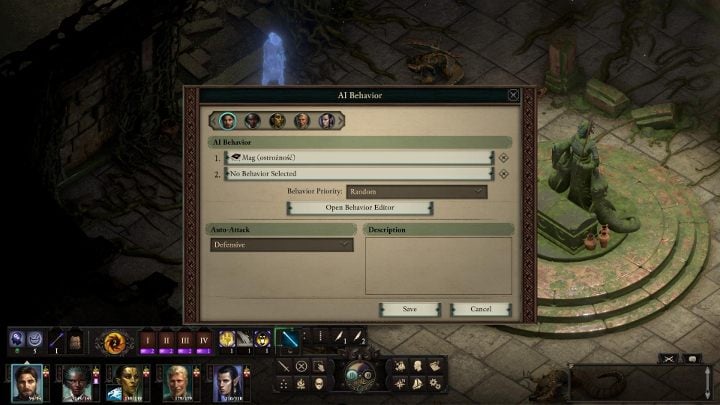 AI Behavior of your team - the game allows you to adjust the actions of your companions to the specific conditions. This means you don't have to control them all the time - some actions will be activated automatically. Actually, the hero can follow the pre-set script throughout the entire battle, but it is not a recommended solution.

How do I set up my companions behavior? Click on the portrait and then right-click on the sprocket head icon to open the window shown in the picture above. The creators have prepared two ready-made behaviors - the "aggression" and "caution". Besides, you can create your own behavior by clicking on the button "Open Behavior Editor". An extensive wizard allows you to adjust a specific condition (e.g. low amount of health) to a specific action (e.g. casting a specific spell).

You can also change the automatic attack options. In this case, you can only use the ready-made solutions: 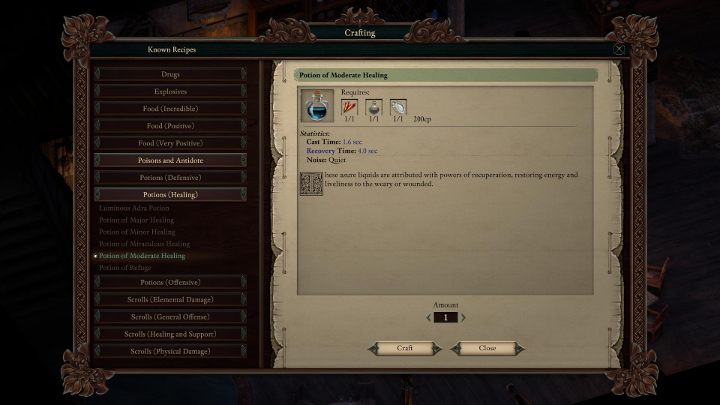 Ensure appropriate equipment - potions (healing and buffing statistics) are a must, but you can also buy something more complicated. Magic scrolls will let you deal additional damage debuff the opponent, whereas narcotics will boot you into action, but you will have to bear the negative withdrawal consequences later on (drops in certain statistics). All of these can be found while exploring the game world, buy from a merchant or craft yourself - the Crafting is on the left side of the screen. For crafting, you need, of course, ingredients that you can either find in the game world, or buy from NPCs.

Below, you will find some useful items that are easy to come by (they are affordable, often appear in various locations or require common ingredients to craft):

Scripted interactions before the battle 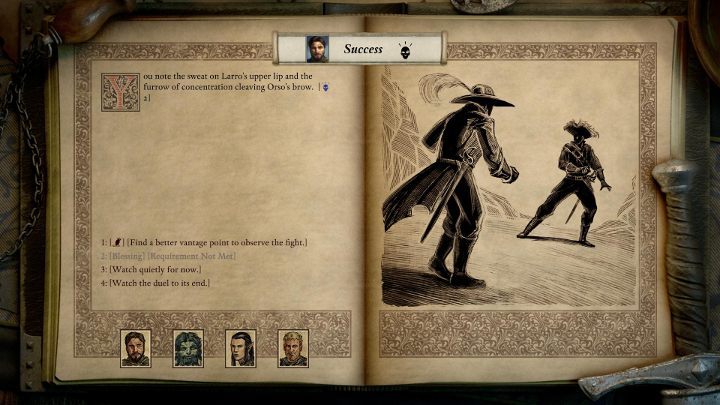 Sometimes, battles are preceded by scripted interactions - you can then influence the outcome of the battle. still before it happens. Available options depend on the current situation and your character's abilities. You can, for example:

The availability of options, and probability of their success is governed by the following passive abilities:

The Course of Battle

Once the battle starts, you should keep several things in mind: 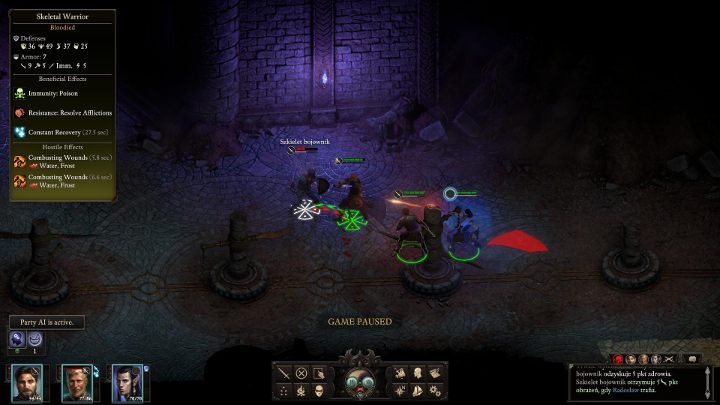 Healing the party after the combat 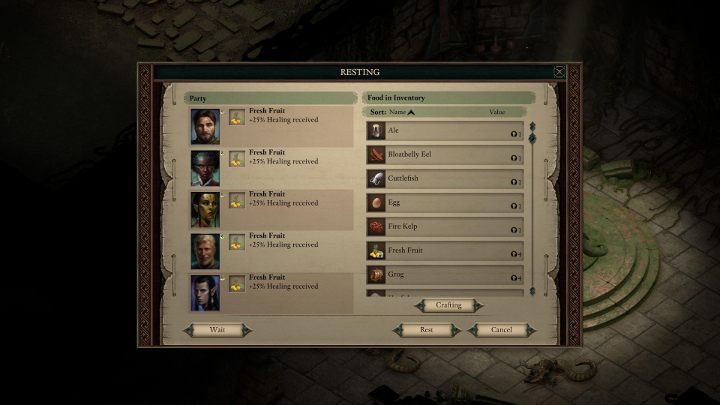 Finally, the battle is over, but your characters have seen better times and have many negative effects on them. Time to rest. Where can you do that? First of all, in inns, but it is also possible, sometimes, to sleep in a village, at one of the villagers' place. A comfortable bed will quickly heal all the injuries.

There is another option that you can use outside of villages and cities, which is resting in an encampment. Press "R", or click on the bonfire icon. In this case, you should have some food on you and place it in the slot next to the character's icon - depending on the food, the character may heal faster and receive additional effects.

To learn more about resting, see the FAQ page "How and where to rest?".

A handful of combat tips: