This unofficial guide for Pillars of Eternity 2 Deadfire is a compendium that every adventurer should get familiar with. The first few pages are a guidebook for Pillars of Eternity 2 Deadfire. There, you can learn about the most important aspects such as creating and developing your character, finding companions and managing your party, how to command a ship, learn about the combat system, read about exploration of the game's world, how to use crafting and enhancing items, stealth or how to adjust the AI of your party members.

The guide opens with basics where you can learn about the most important parts of the game even before you start playing it. We also didn't forget to include the list of all Steam achievements available in the game. The FAQ chapter is an important part of this guide - that sections is dedicated to tips on how to easily get XP, how to get rich fast, how to open locked containers, how to rest, where you can get good weapons and pieces of armor or how to allocate skill points again.

Our guide for Pillars of Eternity 2 Deadfire combines a world atlas with a walkthrough. We have divided it into parts where each segment is dedicated to a separate island. The descriptions of each one of these areas features high-quality maps for all the most important locations. These areas also feature walkthroughs for all main and side quests. We have included various ways of behaving which can depend on skills and stats as well as available decisions and consequences of making certain choices. The final chapter of the world atlas features the most important tables. There, you can find, e.g. a list of pets (animals that can add bonuses to your party's stats) and a list of rare artefacts along with their locations.

Pillars of Eternity 2 Deadfire is a sequel to the classic RPG released back in 2015. This time the action takes place on the titular Deadfire Archipelago where our goal is to chase Eothas, the god of light, who unexpectedly came back to life. Just like in the first Pillars of Eternity, the game is presented from an isometric point of view and the player controls an entire party. The fights happen in real time with an option to use active pause. However, Deadfire gives players even more choices which means that many of the battles can be avoided by relying on wits or persuasion.

Our world atlas and walkthrough for Pillars of Eternity 2 Deadfire features the following color markings:

Red is used for NPCs as well as enemies and monsters that you have to defeat.

Blue is used for names of the islands, towns, villages, dungeons and other unique locations.

Green is used for items - those that you can find on your own, those that are received as a reward and those that can be bought from merchants.

Orange is used for places where you have to rely on your characters' stats or on specific skills so you can, e.g. complete a scripted interaction or convince someone to your opinion.

Bolded font is used for names of the quests.

We recommend checking out this chapter even before you start playing the game yourself. Thanks to the information contained here you will be able to understand the most important gameplay mechanics. This, in turn, will lower a probability of making mistakes that can severely weaken your party or can even lead to their death.

Importing saves or choices from Pillars of Eternity 1

Pillars of Eternity 2 Deadfire has an option to import saves from the first installment. If you don't have any of them then you can make these choices yourself - those that can be done in the original game and in its expansion.

How to import a save from the first Pillars of Eternity? 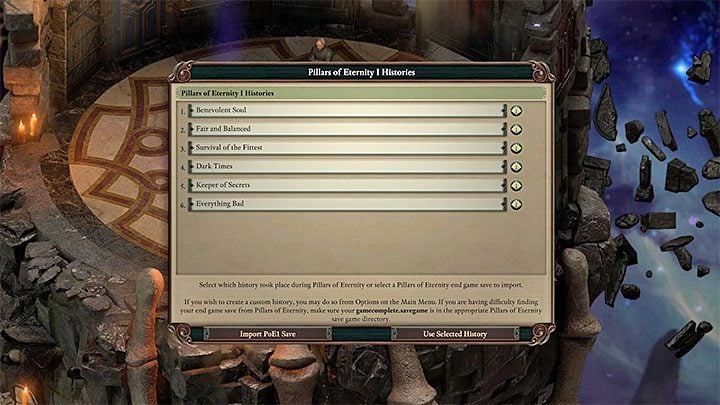 How to start - The first steps in Pillars of Eternity 2

Our guide for Pillars of Eternity 2 contains an extensive walkthrough for the entire game. Some of its pages and chapters are useful for those who have just began playing the game.

The first hour with the game

You first hour with PoE 2 Deadfire will be spend on creating your character, choosing events that took place in the past as well as on exploring the first few starting locations. Here are our recommendations for pages that you should check out at this point of the game:

This island is the place where you will spend your first few hours. You can't leave this place until you complete two main quests related to it. However, this isn't a hindrance - by spending a few hours here you will prepare your party for travels to other parts of the world. This is also a great opportunity to learn about the combat system, exploration or stealth mechanics. Here are our recommendations for pages that you can visit:

Pillars of Eternity 2 Deadfire is a difficult and complex game. Check out the FAQ section if you have any problems:

Getting familiar with the player interface before you start your adventure is highly recommended. By doing that you will be able to quickly reach the most important options and commands. Remember that you can change the interface by going to the main menu. You can choose from a few different settings (all of them have different placements of icons and buttons). 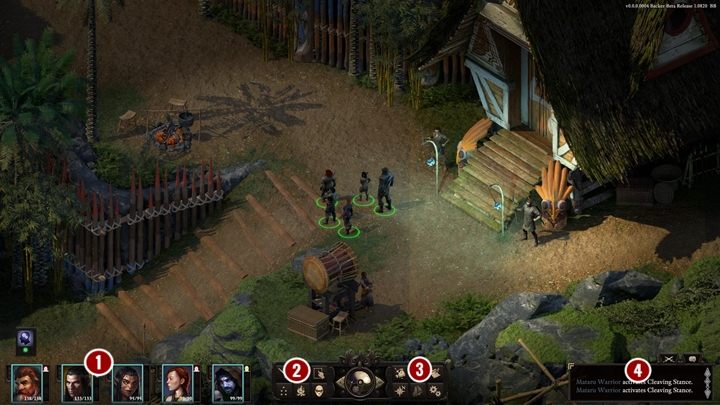 1 Portraits of your party members - They show you your current party. By clicking on a portrait, you open a quick bar where you can find skills, quick items and a currently equipped weapon. Next to the portraits you can find icons for AI settings and the crafting menu.

2 Here, you can find six icons that are responsible for attacking, selecting an entire party, formation settings, resting and activating stealth mode.

3 Another set of icons that gives you quick access to: equipment, character sheets, journal, map, ship management screen and the game's general options.

4 Notifications. Here, you can find information regarding the gameplay and your fights as well as all dialog lines. You can change its size by moving the cursor on one of the box's edges and holding the left mouse button.

Learning the basics is very important - by doing that the game will provide you with better experience. The chapters listed below contain information about the basic gameplay mechanics found in PoE 2:

PoE vs PoE II - On this page you can find a list of the most important new features of Pillars of Eternity 2 Deadfire. Some of them include the ability to travel around the world by using a ship, a chance to command multiclass characters or an option to rely on party assist rolls.

Exploration and interaction with environment - Explore the game's world and find hidden treasures! In this chapter you can learn about exploration of new locations on the world map. Also, you can read about attractions and potential threats that await your heroes.

Combat - Here, you can find information about the combat system as well as a few tips on how to be victorious. We have listed hints on how to prepare yourself for a battle, which party members are worth choosing, how to help yourself with your companions' AI settings, how to deal with problematic enemies or how to completely regenerate your characters' life after a battle.

General information about travelling by using a ship - One of the new features of Pillars of Eternity 2 Deadfire is the ability to command your own ship. Here, we inform you when you can use a ship, how it affects exploration, how to take care of your crew's well-being and what are the potential threats that await your party on open waters (e.g. a sea battle).

Basic information about party - In Pillars of Eternity 2 your character isn't alone but accompanied by up to four other members. Check out which classes are worth choosing and how to make a good formation that will help your party survive on a battlefield.

Creating and developing a character

For many, creating a character is the most important part of an RPG. Pillars of Eternity 2 Deadfire offers a great number of options and, what is the most important, almost every minor or bigger decision will have impact on your adventure. Check out these chapters for an easier start!

Character creation - This page contains all the steps necessary for creating your own character. We have also highlighted the most important decisions such as, e.g. choosing a main class or choosing two classes (a multiclass character).

Active and passive skills - What do they offer? This chapter contains a complete list of all available skills. Here, you can learn about active skills (e.g. Mechanics, Alchemy, Athletics) and the passive ones (e.g. Metaphysics, Bluff, Intimidate) and how they impact the game.

Leveling up - What should I do to level up and what profits it gives me? Answers to these and other questions can be found on the related page.

Choosing a class is one of the most important decisions in every RPG. Our guide contains descriptions of every class in PoE 2 Deadfire as well as illustrative builds and ways of developing those classes.

Pillars of Eternity 2 offers a lot of hot keys which makes giving orders or checking your characters' stats much easier. The table below contains the most important buttons and keys used during the game:

Best RPG Series That Aren't Coming Back Any Time Soon

Many RPGs deserved proper follow-ups, yet they have been sitting on the shelf with poor prospects for the future for years. Here is a sad reminder of the great role-playing games that are unlikely to be revived any time soon.

2018 should be as good as 2017. Among the potential hits there’s the sequel to Red Dead Redemption, the long-anticipated third part of Kingdom Hearts, the visually splendid remake of Shadow of the Colossus, and the incredibly atmospheric Vampyr.

The best of crowdfunding – what's interesting on Kickstarter these days

The glory days of crowdfunding are a thing of the past – which doesn’t mean that nobody’s willing to help fund ambitious undertakings anymore. Here’s a selection of the most interesting crowdfunding projects of the last several months.

„The Golden Age of RPG is upon us”, said Brian Fargo and got busy working on three separate projects. There are, however, many more RPGs worthy of attention out there, so we’ve cooked up a list of the best titles yet to come.

During the Digital Dragons conference, we interviewed Feargus Urquhart , the CEO of Obsidian Entertainment. He revealed that the company is working on Pillars of Eternity II and an unannounced game on Unreal Engine with Tim Cain and Leonard Boyarsky.