On this page of the Hitman 3 guide, we explain how to reach Arthur Edwards and list all unique methods (Challenges) of eliminating him.

After an extended cut-scene, Agent 47 wakes up on the lab table and begins the hunt for the mission's sole and most important target - Arthur Edwards (The Constant). 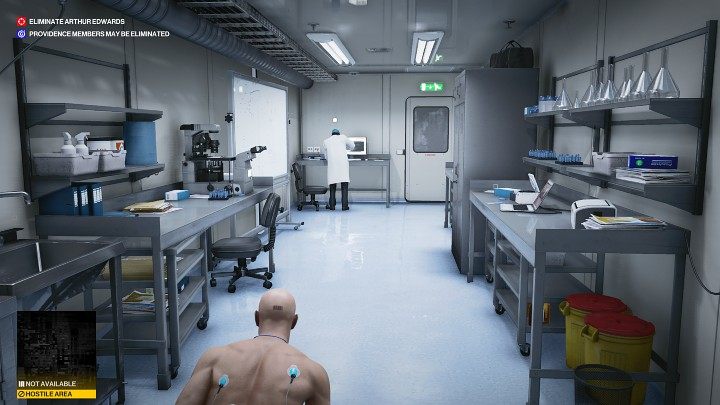 After Agent 47 wakes up in one of the lab rooms, get out of bed and go through the glass door. At the desk you will notice a worker in a white apron - attack him from behind, overpower him and take his access card (Blue Laboratory Keycard). If you want, you can change into his stuff (Ph.D. challenge). Hide the body in the closet and leave the room. 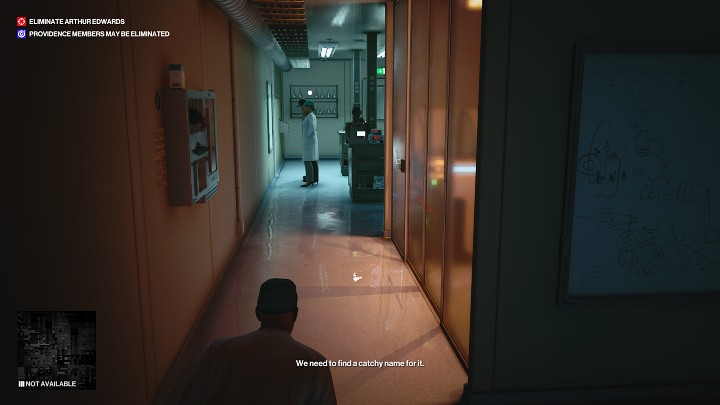 Further down the corridor you will encounter two employees. Avoid them and go to the next room. 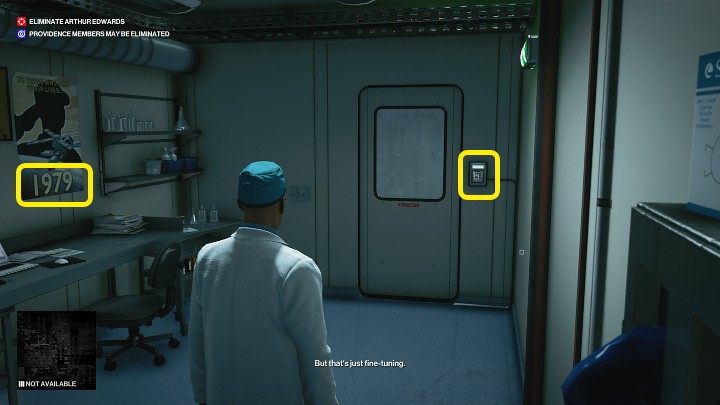 Approach the cold storage door and open it: code 1979. The same number appears on the poster to the left. 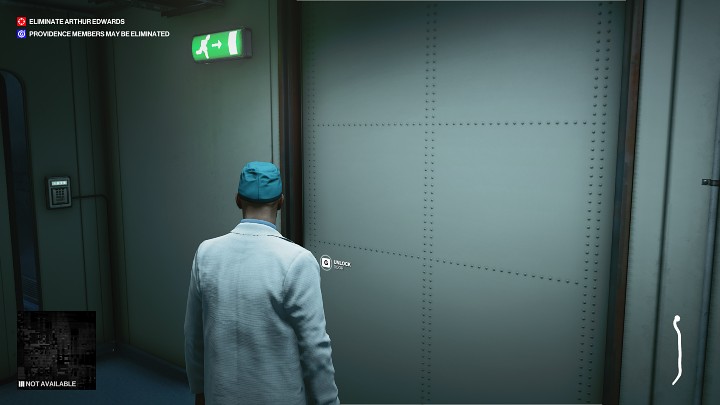 In the cooler you will find a rusty crowbar - pick it up and return to the previous room. Use thecrowbar to open the large metal door. It will turn out that the place you are currently in is a speeding train. 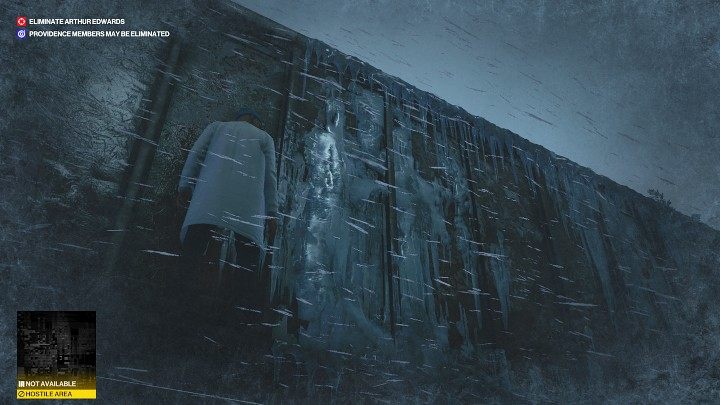 While holding onto the wall of the train car, move toward to the next one. When you reach the icy surface, climb to the roof. 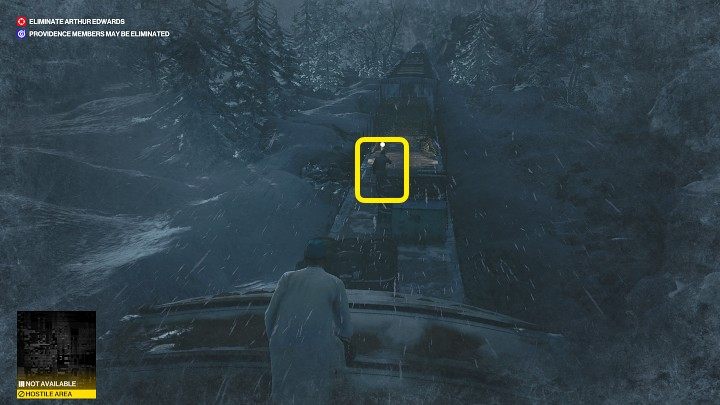 A little further ahead you will encounter one opponent. Jump off the roof, approach him from behind and overpower him. Change into his stuff (Mall Cop challenge), and hide his body in the container. Go to the next train car. 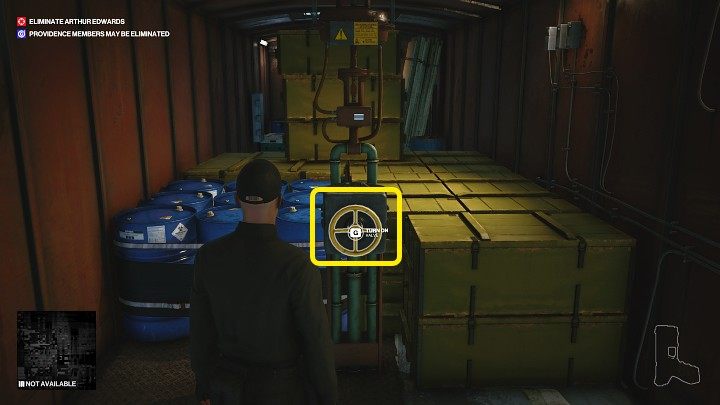 Walk to the end of the train car and pick up a valve from the ground. Then go back to the beginning of the wagon and install the valve at the location shown in the image above. Turn the valve to open the hatch in the wagon roof. 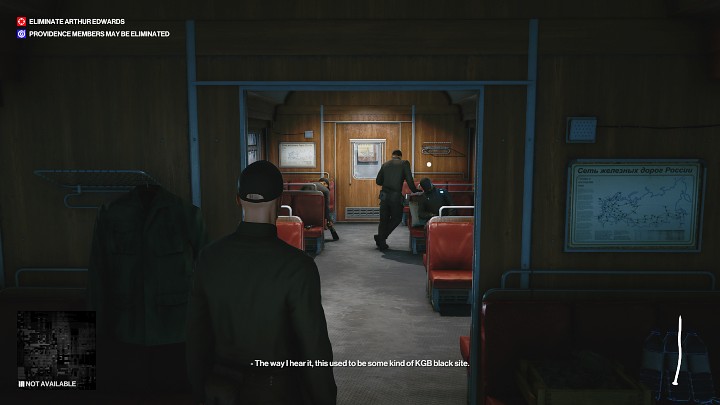 Go outside and, keeping to the right, move forward. Enter the train car and continue forward - the sleeping guard won't pay attention to you unless you start generating noises. 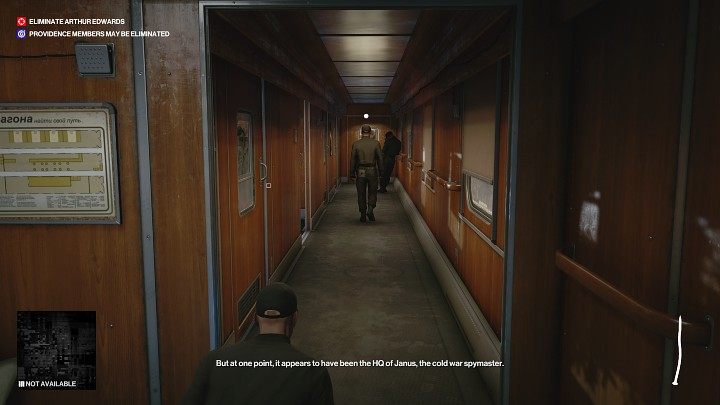 The corridor of the next train car is patrolled by one guard. When he turns his back on you, go to the nearest open compartment on the left. Lock the door behind you for safety. 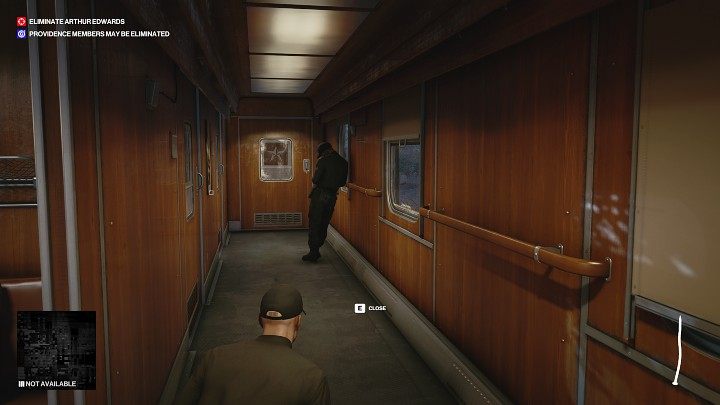 Wait for the guard to pass you, then go behind his back and reach the hallway with a door on the left. Go through the open wagon with the tree and enter the next wagon. 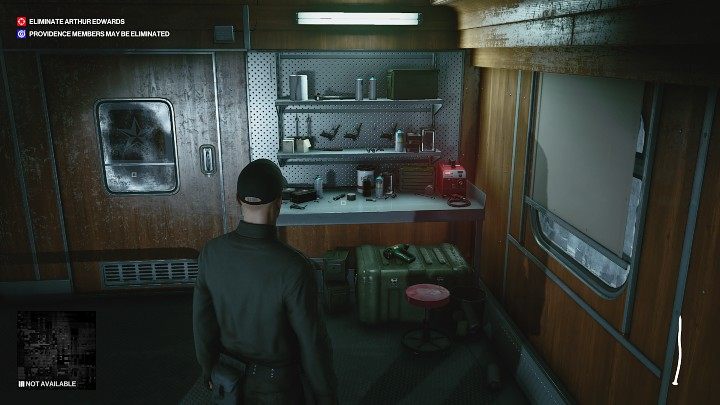 If you want, you can create a gun with a silencer on the workbench (The Gun Muffler challenge). Go to the dining car. 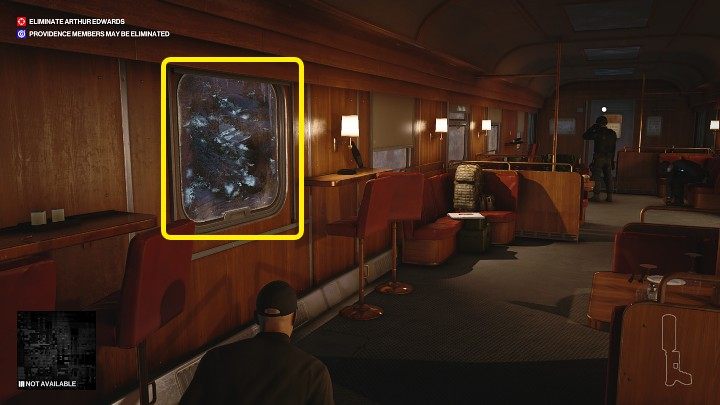 Once the guard is not looking in your direction, go through the window on the left. Then go under the window to the other side and wait. 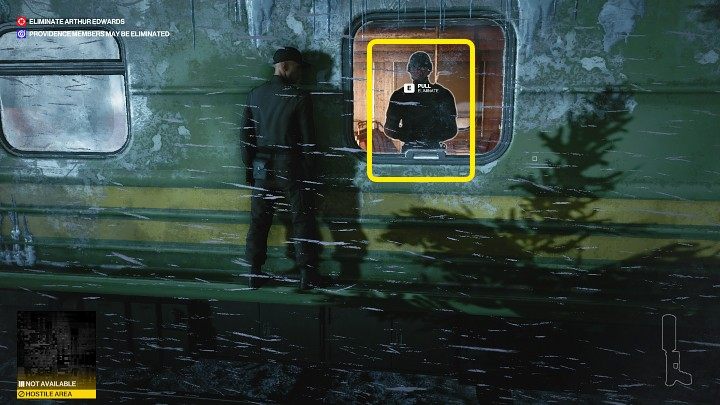 When the guard approaches the window again, grab him and throw him outside ( Snow Angel challenge). Now you can go inside and move to the next carriage. The other guards will not pay attention to you. 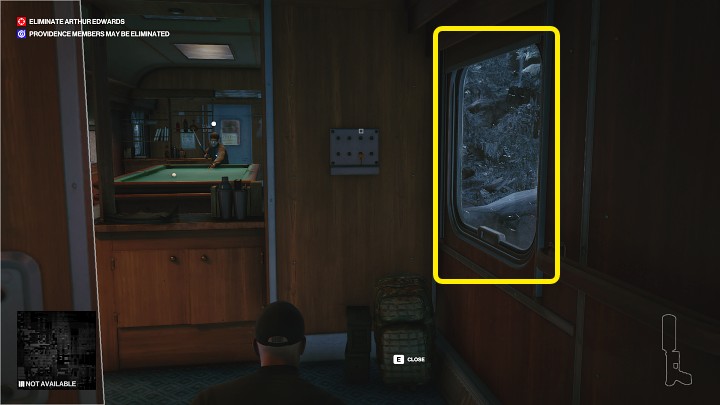 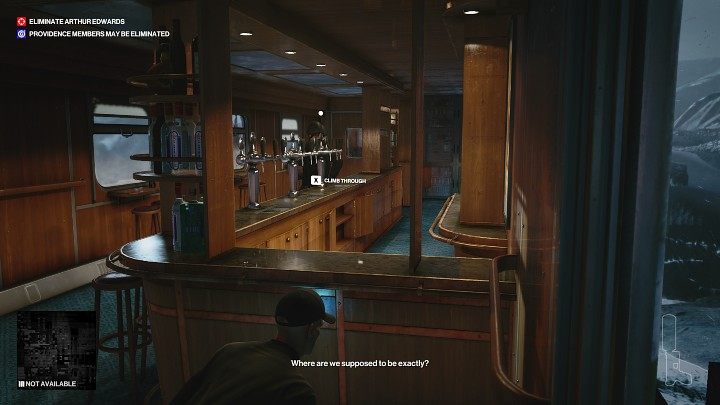 Jump over the bar counter, then go behind the guards to the window on the right and go outside again. Move forward, enter through the next window, and proceed to the next train car. 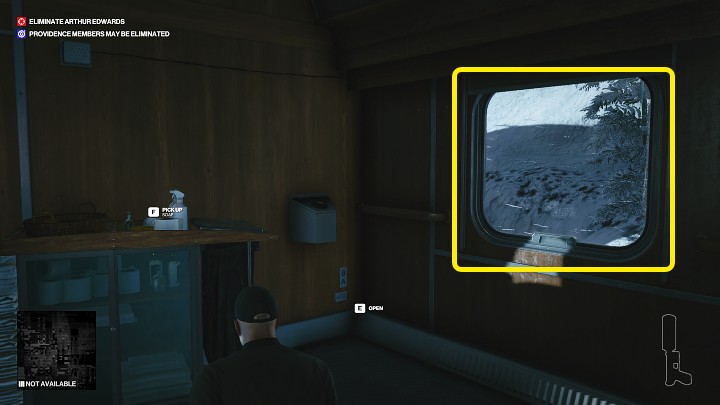 Now you must once again use the window on the right. Move forward and go inside through the nearest open window. 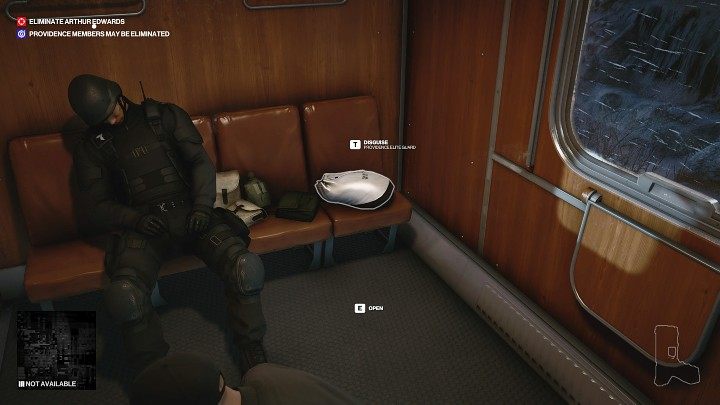 In the compartment, you will come across one sleeping guard, who will not pay attention to you if you do not make any noise. Here you will find a Providence Guard outfit - change ( You've Got Some Skills challenge), exit the compartment and go to the right. 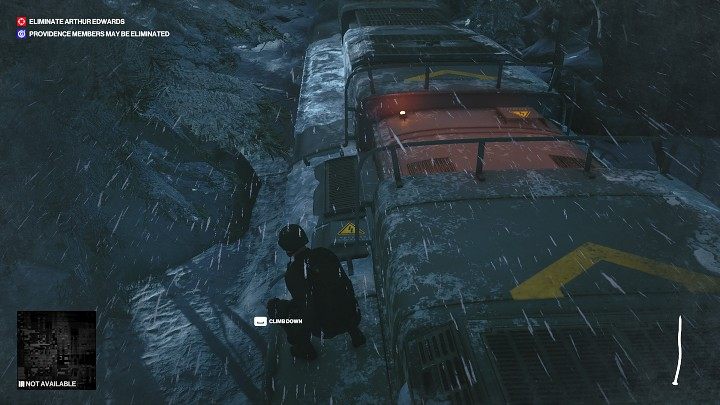 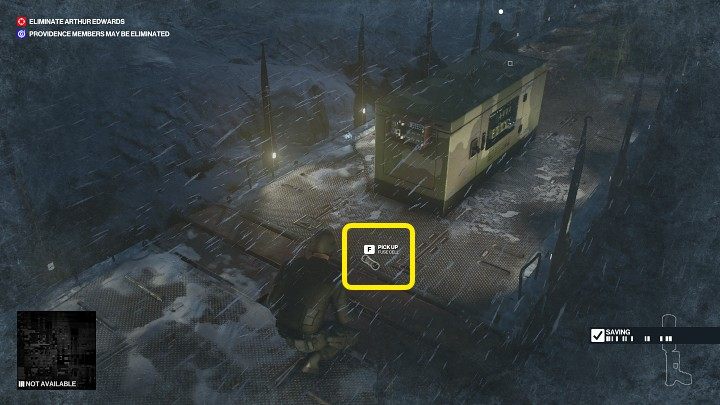 A little further on you will notice one guard that you can bypass or overpower. Take the fuse from the floor and climb the ladder to the roof of the next train car. 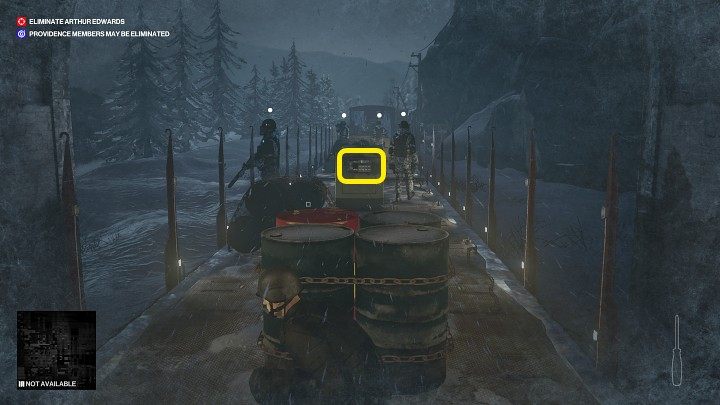 There are five guards stationed on the next open wagon. You can easily evade them if you install the fuse you acquired earlier. This will activate a flash of light that will blind all enemies. 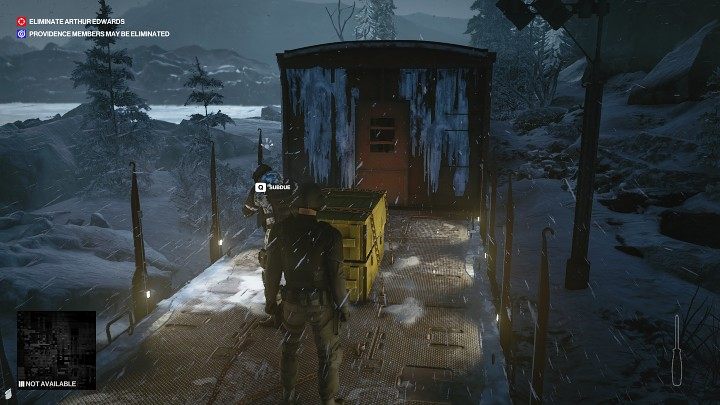 Without wasting time, run ahead and overpower the last guard - hide the body in the container. He must be silenced so that he does not detect our activity in the next carriage. By dressing up in his stuff you can pass the Heavy Duty challenge. 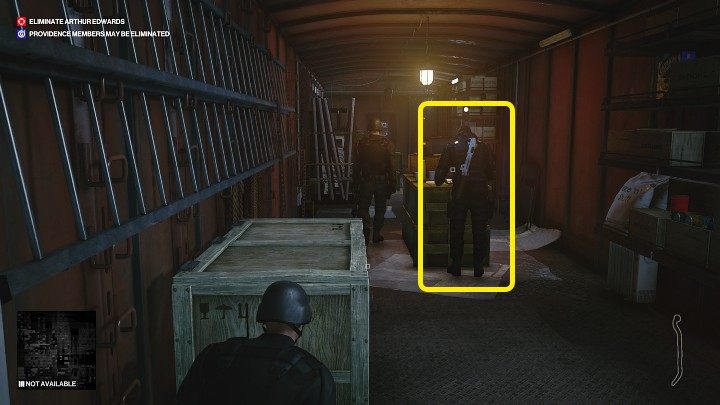 Hide in the location shown in the image above. Wait for one of the guards to start walking to the other end of the train car. Now, attack the man standing by the crate from behind and overpower him. Change into his clothes (I'm The Conductor Now challenge), and hide his body in the chest on the left. 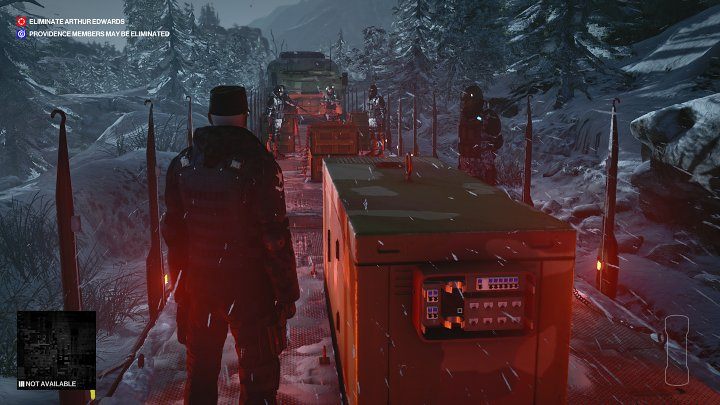 Go outside and go to the next train car. In the disguise you have just acquired, you will not arouse any suspicion. 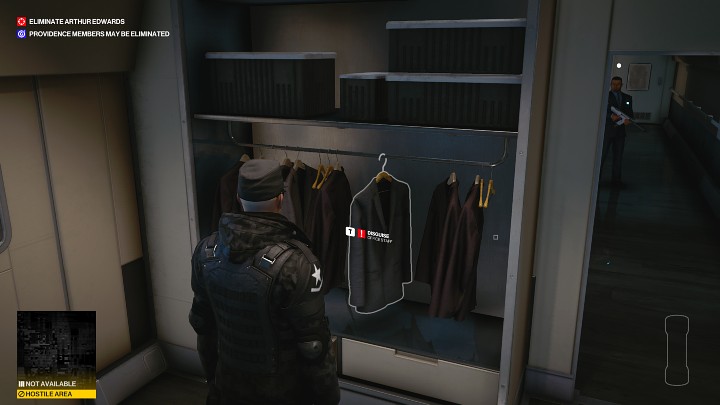 Once you enter the office compartment, change into the outfit hanging on the hanger so as not to arouse the suspicion of the guards and other employees, and then go through several carriages. 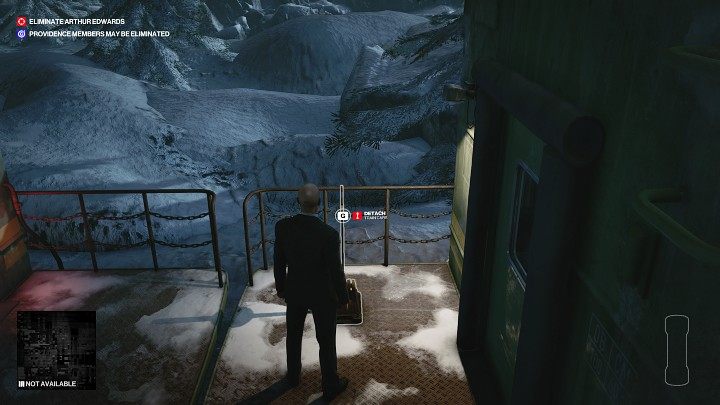 Once outside, pull the lever to disconnect the remaining train cars. 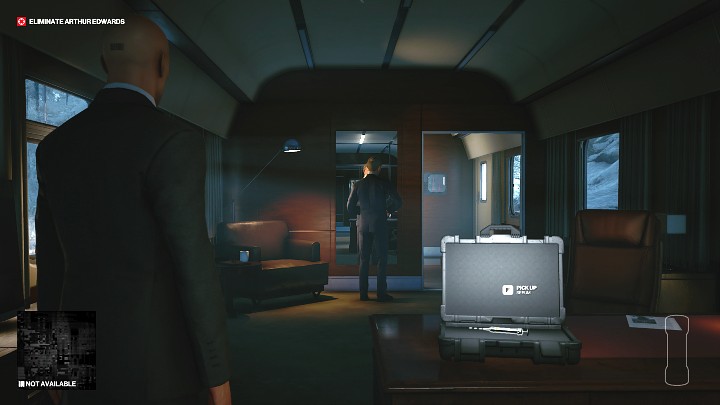 Go through several compartments and meet with Arthur Edwards. You can eliminate him in several ways, but only two are counted as completing challenges and we describe them below. 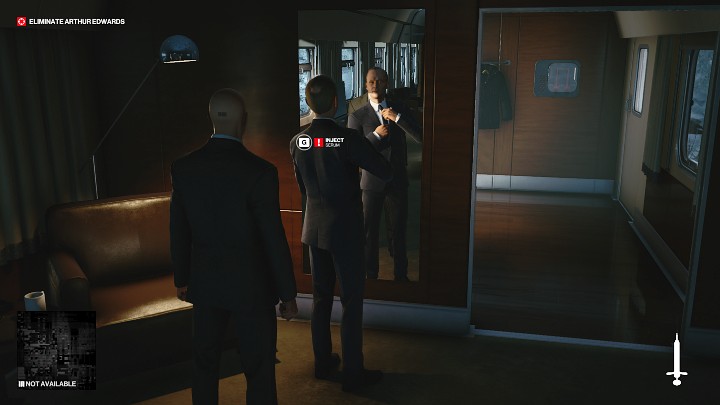 To complete this challenge, you must poison Arthur Edwards with his own serum. When The Constant turns his back on Agent 47, take the serum from the briefcase, engage your opponent from behind and inject him with the contents of the syringe. Once the serum takes effect, Arthur Edwards will lose his memory and the task will be completed. 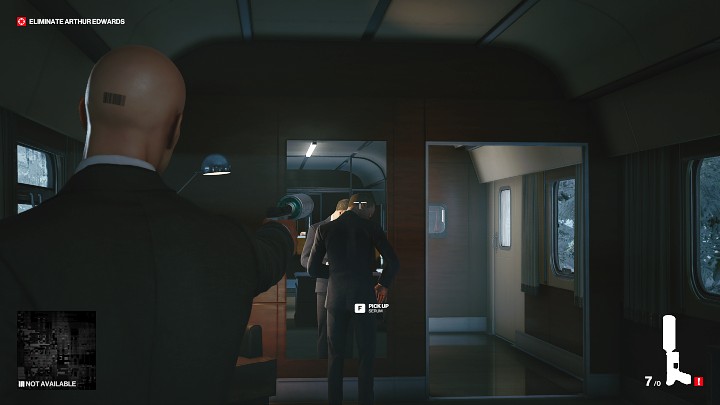 As you move between train cars, you will have several opportunities to acquire weapons. When it comes to meeting Arthur Edwards (The Constant), just shoot him in the head and the Straight Shot challenge will be scored. 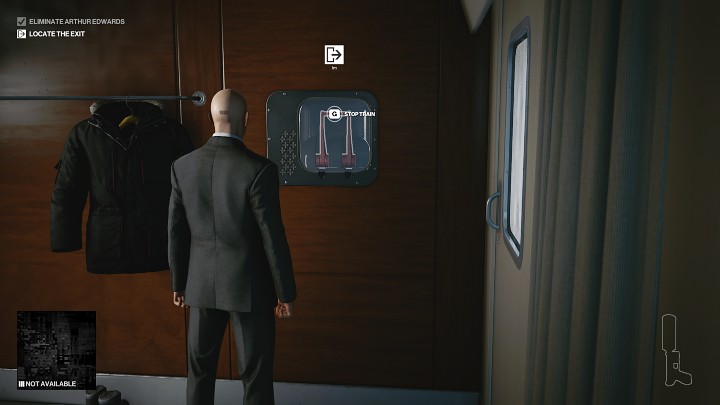 If you decide to shoot Arthur Edwards, you will have to manually stop the train to activate the Hitman 3 ending. Simply pull the emergency brake.