On this page of the Hitman 3 game guide, we have listed the main ways to assassinate Alexa Carlisle in Dartmoor. We have described various techniques for getting rid of Alexa related to challenges in England. You will learn how to poison Alexa, how to kill Alexa in an arranged accident, or how to shoot Alexa with a sniper rifle, ect.

We also recommend you complete all 3 story quests. These are more complex ways to eliminate Emma involving disguising as unique NPCs. All story missions are described on separate pages of this guide.

Making Emma kill Alexa - Another Death in the Family

This is an assassination variant that is rewarded with an achievement / trophy. Go to the Family Feud Trophy page for a detailed description.

Alexa electrocuted during photo shoot - One for the Ages 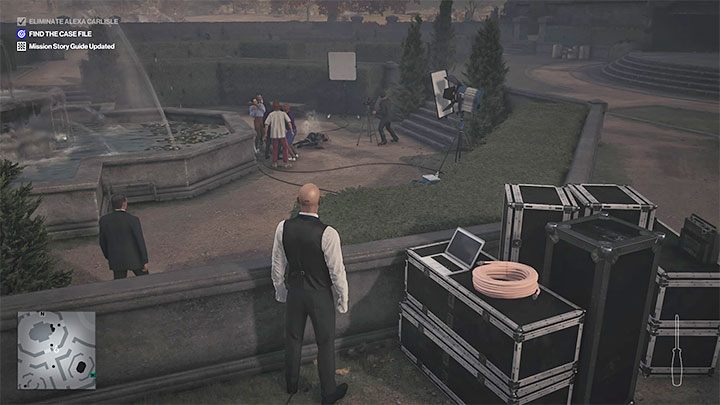 We've described this assassination variant in detail on the page A Day to Remember - mission story.

Interestingly, you can choose not to disguise yourself as the photographer (point 6 on the map), but instead, find the fuse for him. You can sabotage the lath and the fountain and get Alexa killed as the real photographer takes a picture of the family. It will unlock an additional Say Cheese challenge.

Dropping the chandelier on Alexa - I Find This Amoosing 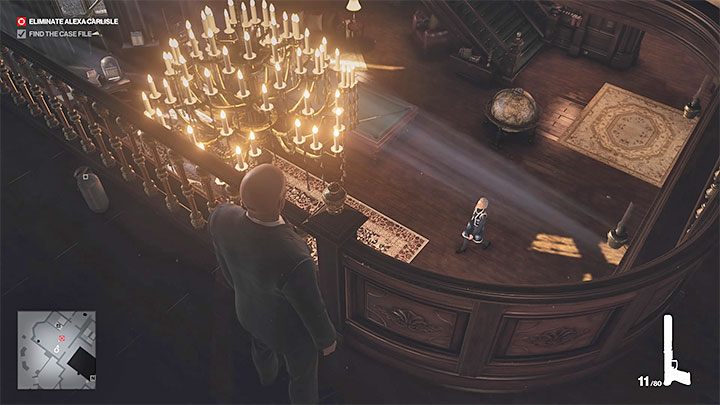 The main building of the mansion has many chandeliers that can fall. Just hit the rope on which the chandelier hangs with a gun. You can easily kill Alexa by dropping the chandelier in the library(point 17 on the map).

You have to wait until the family meeting is over. Alexa will start moving around the first floor of the building. Hide on the upper level of the library (point 26 on the map) and drop the chandelier while Alexa is on the phone. You will not complete the described challenge, but you can unlock the accident-related challenge. 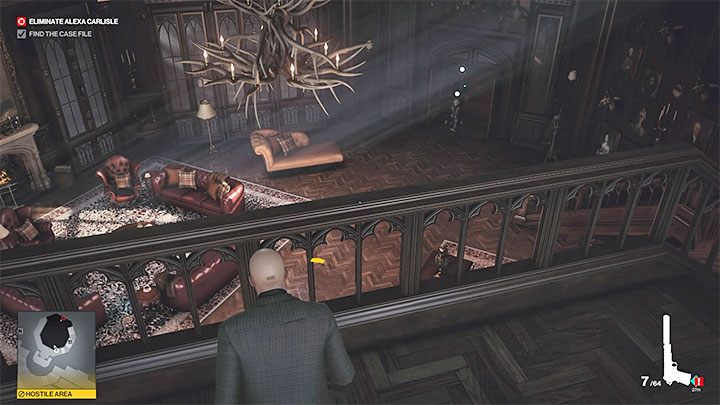 The chandelier associated with this challenge is located in Alexa's office on level 2(point 37 on the map), and you will recognize it by its unusual appearance resembling hunting trophies. When you reach the office, hide on level 3 - on the balcony or the roof. Alexa returns to the office several times during the initial phase of the mission (before the family reunion). Wait for her to pass under the chandelier and use the silencer gun to make it fall.

Shooting Alexa with a sniper rifle - Keep Calm and Aim 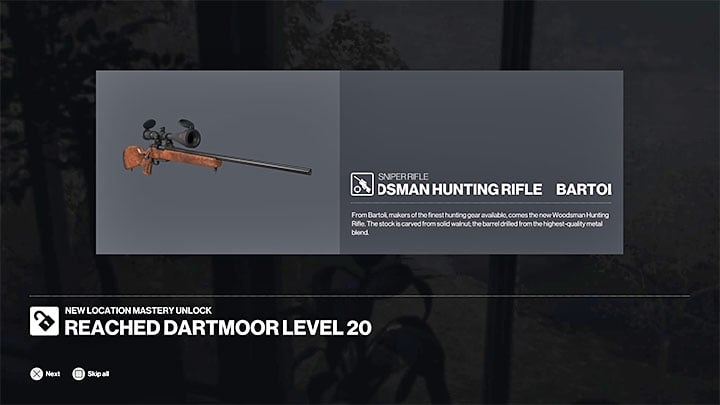 To complete this challenge, you will need to take a sniper rifle on the mission. The sniper rifle is a reward for reaching 20 Mastery Level in Dartmoor, but if possible, use the sniper rifle with a silencer from some other mission. It is best to hide the rifle to the large stash in the graveyard, as you'll have to get there anyway.

Make sure you unlock the shortcut on the mansion's roof - we described it on the Map and mission information page. It will allow you to easily reach the place from where you will shot with the sniper rifle. 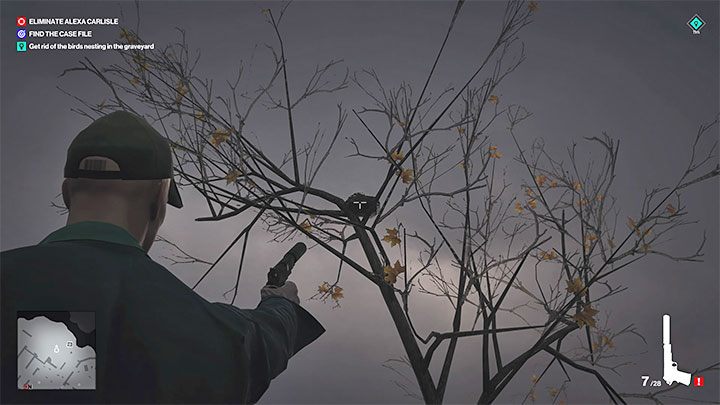 Head out to the graveyard(point 4 on the map). You have to destroy the bird nests without alerting the gardener, who is also (unsuccessfully) trying to throw them off. It is a good idea to distract him, for example, by throwing a coin. This will allow you to use the gun with a silencer to destroy 3 nests in peace.

Keeping the worker alive is important because once the nests are destroyed, he must inform the gravedigger about completing the task. The gravedigger will instruct to call Alexa, and she will go towards the cemetery. You have some time to prepare, but we still advise you to hurry. 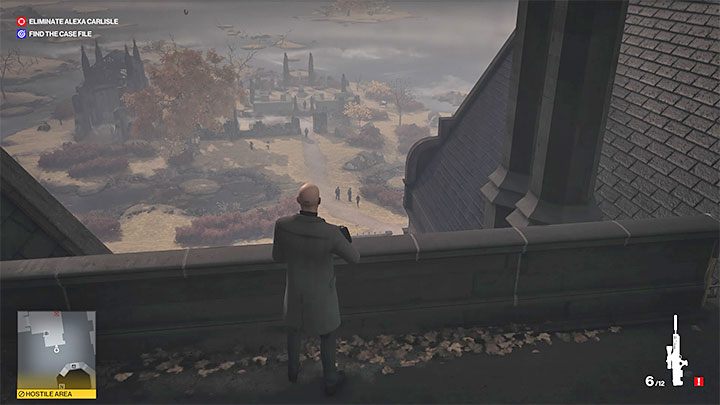 Take the sniper rifle from the stash and climb to the mansion's roof (point 41 on the map). Use the already mentioned shortcut. It will allow you to climb up the west building wall (you won't have to enter the mansion). Position yourself at the point shown in the picture above. You will be able to see the graveyard from here. 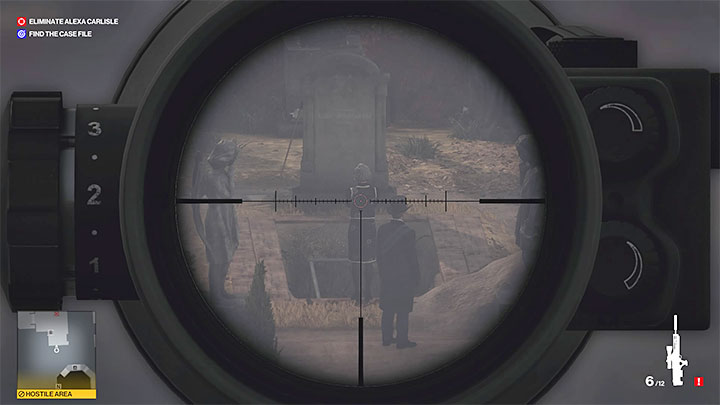 Wait until Alexa arrives and makes a round with the gravedigger. The perfect moment to shoot is when Alexa stands in front of an open grave. If possible, shoot her when the gravedigger is facing the other way. That way, you won't be detected, and you will be able to get the Sniper Assassin rank at the end of the mission. 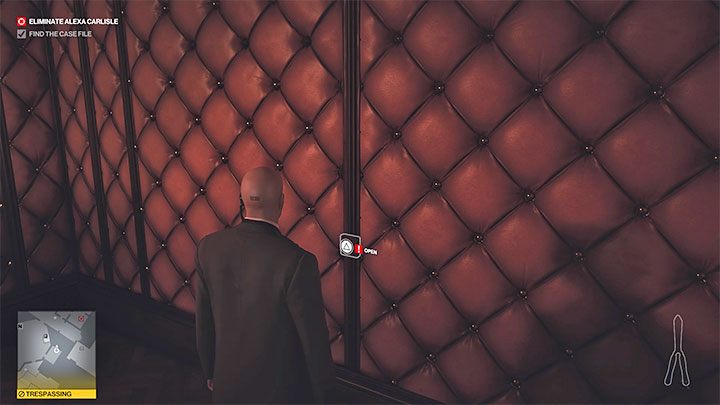 Alexa's private room is located on level 2 and is adjacent to her office (point 39 on the map). The easiest way to get there is by disguising as a guard or climbing up the west building wall (you had to unlock a shortcut on the roof).

Once inside, find the button which will unlock the passage to the adjacent secret room (point 38 on the map). 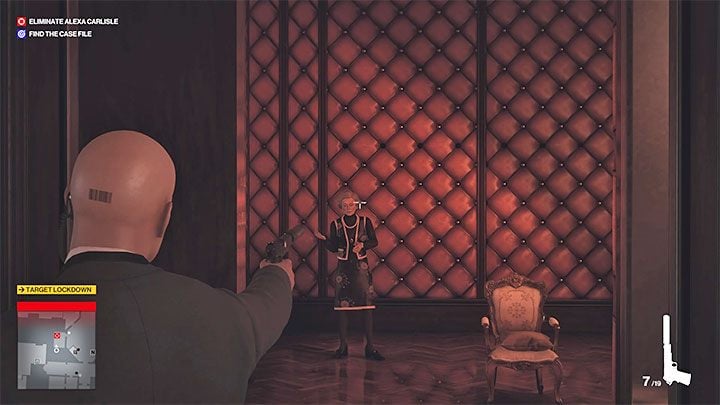 All that's left is to wait for Alexa to show up in the private room. It's a good idea to look through the hole in the wall first (another minor challenge) and shoot her before she notices Agent 47 and runs.

Assassinating Alexa in an accident - Someone Could Hurt Themselves

You can easily complete this challenge while performing some other assassination variant, such as dropping a chandelier on Alexa or electrocuting her during a photoshoot. 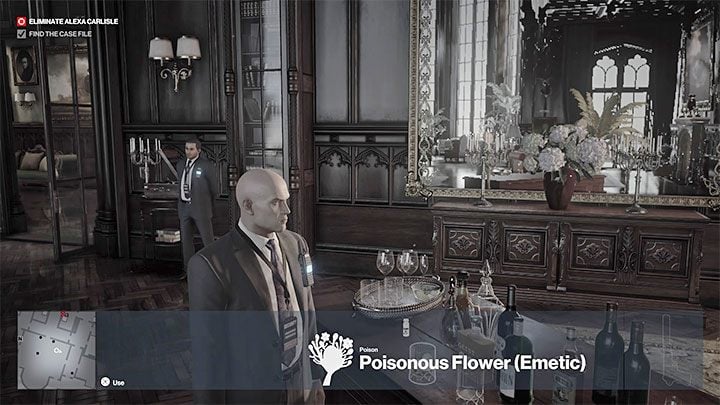 In this challenge, you have to poison Alexa with rat poison. Get the disguise of staff or a security guard and rat poison. You can take the poison with you on the mission or find it in many places on the map: for example, by the eastern wall of the building (point 8 on the map).

Wait until the family meeting in the living room is over (point 20 on the map). Alexa will start moving around the first floor of the building. Stay in the living room and pour the poison into the whisky glass - in the right disguise, you will not be exposed. 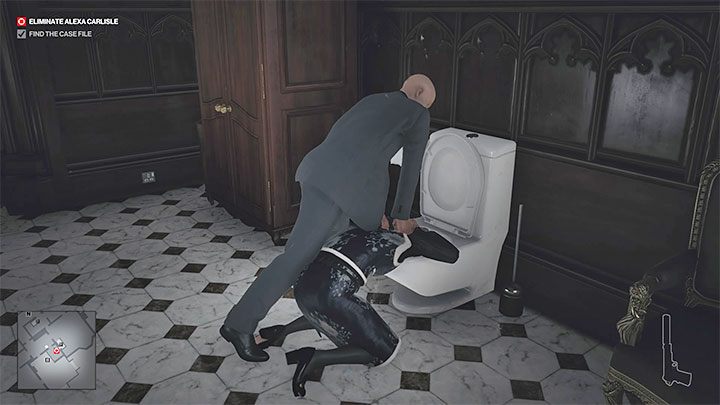 After Alexa drinks the poisoned whiskey, head to the bathroom(point 18 on the map). Sneak in there from the outside - going through the shutter. Drown Alexa in the toilet when she vomits. Escape quickly, because after a while, her bodyguard will enter the bathroom.

Assassinating Alexa with a shot to the head - Straight Shot 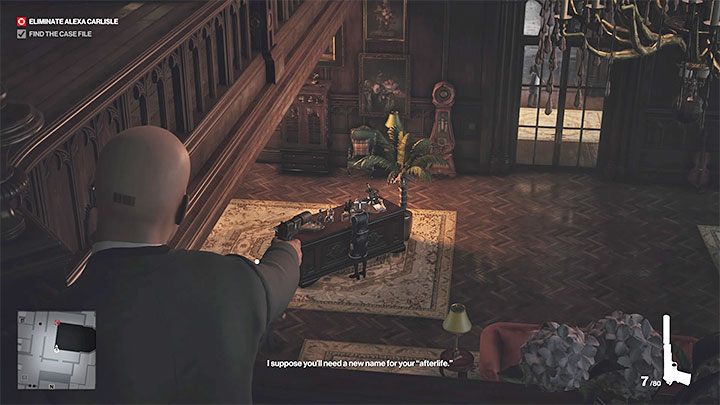 There are plenty of opportunities to complete this challenge. Stand where you can comfortably aim the gun at Alexa's head.

You can also complete the challenge while using the sniper rifle, but you would have to hit the woman in the head. This can be problematic if you are shooting from a long distance (you can press the right knob and stabilize the sight for a moment). 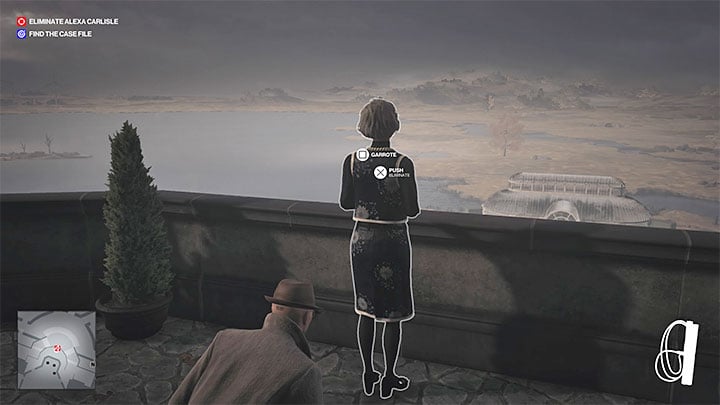 At several points in the mission, Alexa will move away from her bodyguard and, for example, go out on the balcony or go to a private room. These are good opportunities to get closer to her. If you just want to complete the challenge, then you can attack her at any time. Even if the attack is recorded and will become a target by guards, the challenge will still be considered finished. 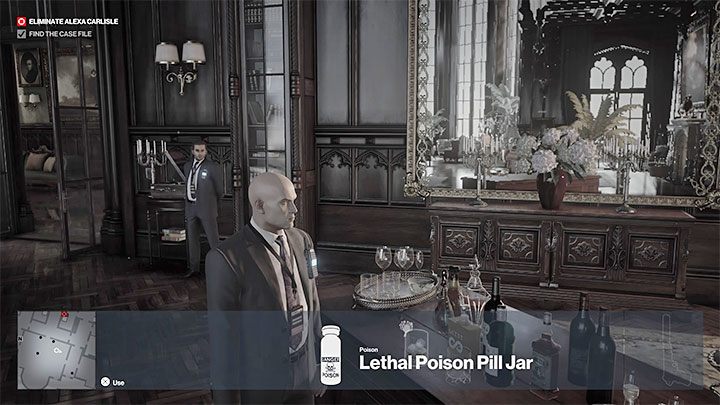 This challenge should unlock if you helped Emma murder Alexa. Otherwise, you can take the lethal poison on the mission or get it on the map - in the butler's office (point 22 on the map) or after repairing the distillation kit in the greenhouse(point 10 on the map).

Disguise as service worker or security guard and use the lethal poison on the whiskey glass in the living room(point 20 on the map). Unfortunately, Alexa only begins to move on the first floor after a family meeting has ended. 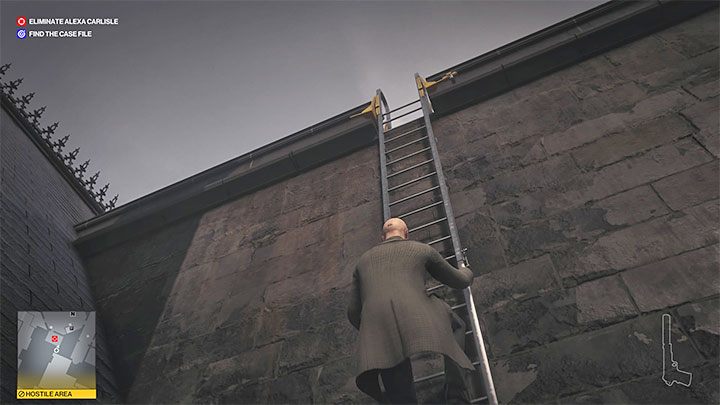 Below you will find some tips on how to complete the mission on Dartmoor according to SASO rules: getting the Silent Assassin rank and completing the mission wearing the default Agent 47 outfit (Suit Only). 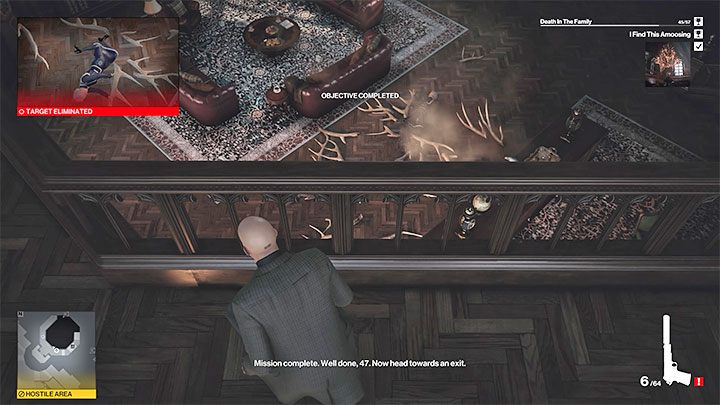 Additional note - You can also hit the chandelier rope while standing on the roof, but it's harder to get the timing right. You would have to use Instinct Mode.