This page of the guide to Ghostwire Tokyo contains a walkthrough of the main mission Family, which is a part of Chapter 5 - Severance. You will learn, i.a. how to get near the Tokyo Tower and how to win the boss fight with Okina - a giant spider. 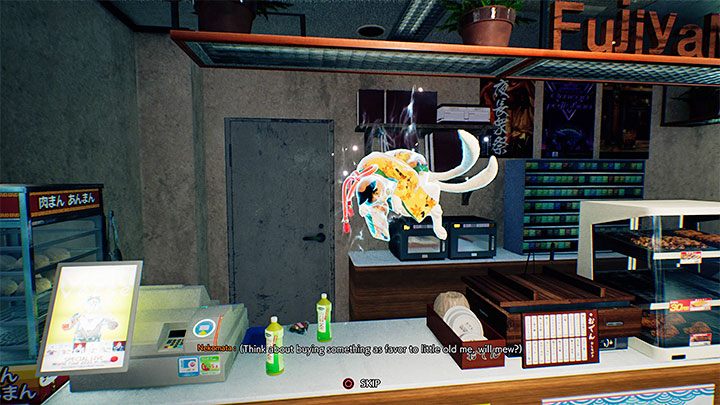 Chapter 5 will begin after you use your motorcycle to "cut through" the fog. Head towards the huge tower visible in the distance. The route is restricted by fog, and therefore linear.

Soon after you start moving, you will come across a working shop - you can (optionally) do some shopping. This is a good way to restock your disposable items (arrows, talismans and food - only if you have its minimum amount). 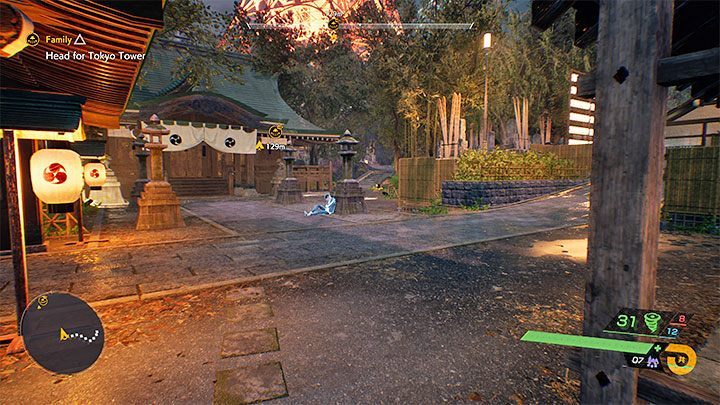 Then, you will meet Rinko and a cut-scene with her will play. Examine the spot where she was sitting to read the message. The game should cue another cutscene, this time about the boss fight with Okina.

Okina is a huge spider. 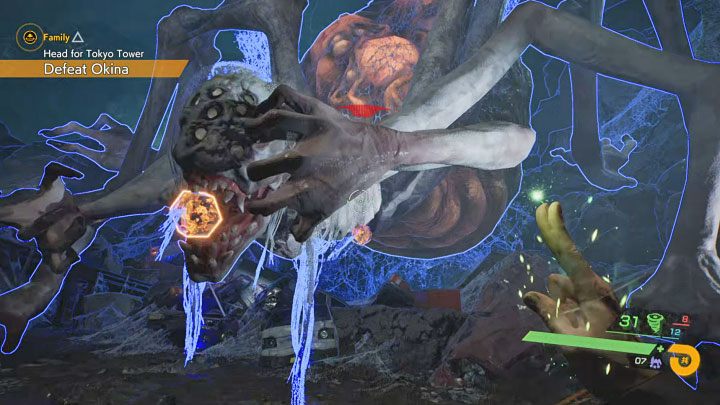 Using Spectral Vision near the boss will let you see that Okina has two weak points - on the mouth and in the lower part of the torso. 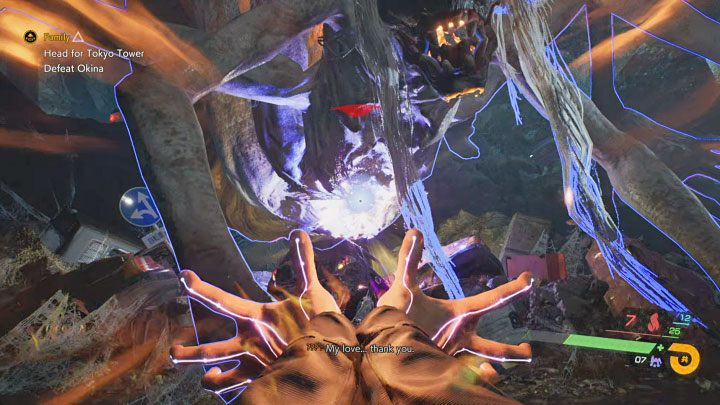 Your task will be to attack these sensitive points. Focus on one of them at a time. Use Wind or Fire Weaving, and also hold down the aim button to hit the target as often as possible, and waste as little projectiles as possible.

The main objective in both cases will, of course, be weaken the vulnerable spot enough to expose the core. This will allow you to grab it and pull it out. 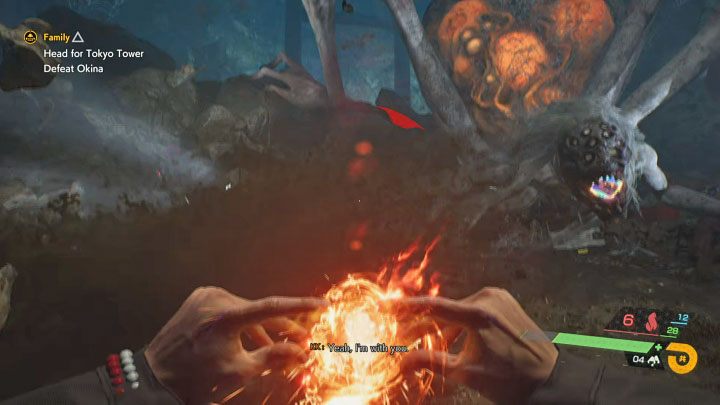 Okina uses several types of attacks. You can avoid the upper limb swings by moving outside of their range or by jumping over them at the tight moment. 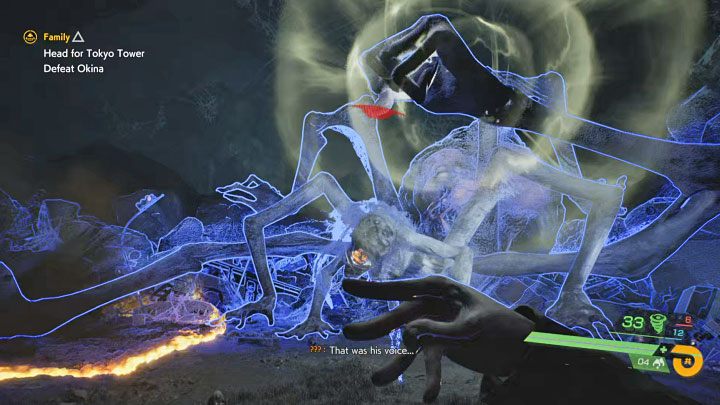 The boss also hits the arena and generates shockwaves this way, which is a dangerous attack. You can also try to jump over the shockwaves. 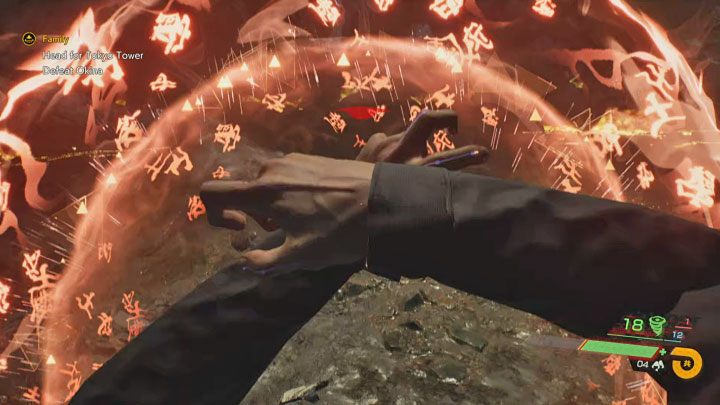 The waves will get stronger in the second phase of the fight, and jumping over them can be a lot more difficult then. Alternatively, you can block the attack to partially or completely (perfect block) avoid taking damage. 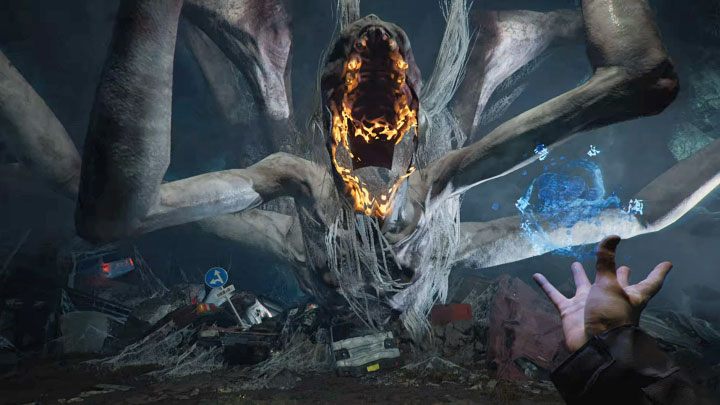 You can find Ether in the arena, but your energy should also be replenished once you've removed the boss's first core.

By breaking both cores, you will defeat Okina. 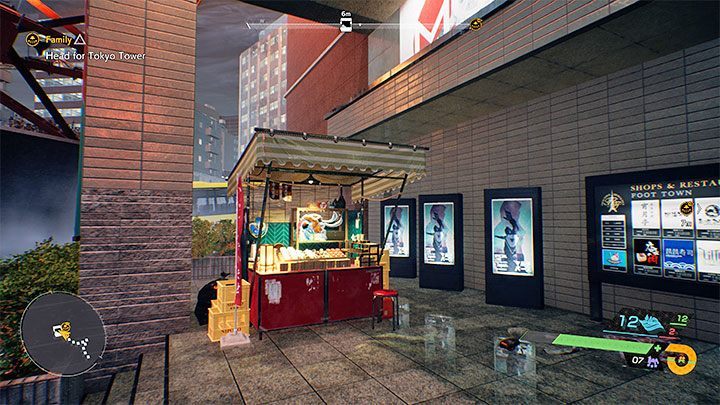 Once you've dealt with the boss, you'll continue your journey to Tokyo Tower. Again, the route is very linear. There's a stall in front of the entrance to the tower, where you can prepare for the next upcoming boss fight (you can buy arrows and talismans).

When you try to enter Tokyo Tower, you will again receive a point of no return warning. You will have to complete all final quests and battles without being able to return to the world map.