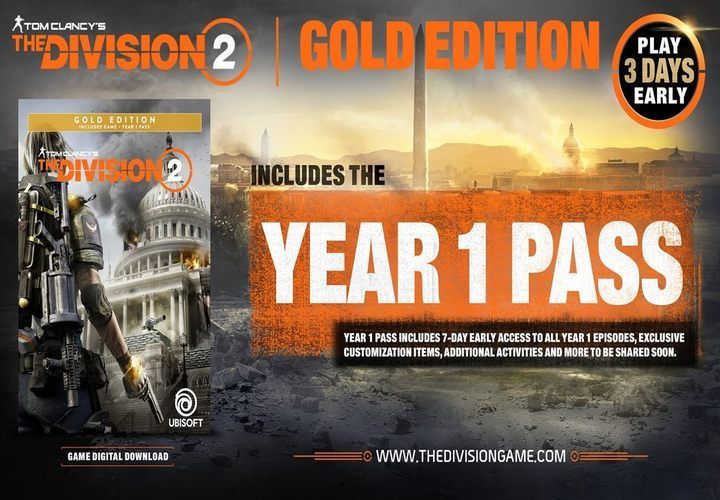 The screen shows the Golden Edition of Tom Clancy's The Division 2.

In addition to the Standard Edition, which only contains the game Tom Clancy's The Division 2, there are 4 more editions. The Golden Edition includes the game and year one Season Pass. Ultimate Edition (PC exclusive) includes the game, season pass year 1, and the Battleworn Secret Service Agent, First Responder, and Elite Agent packages. 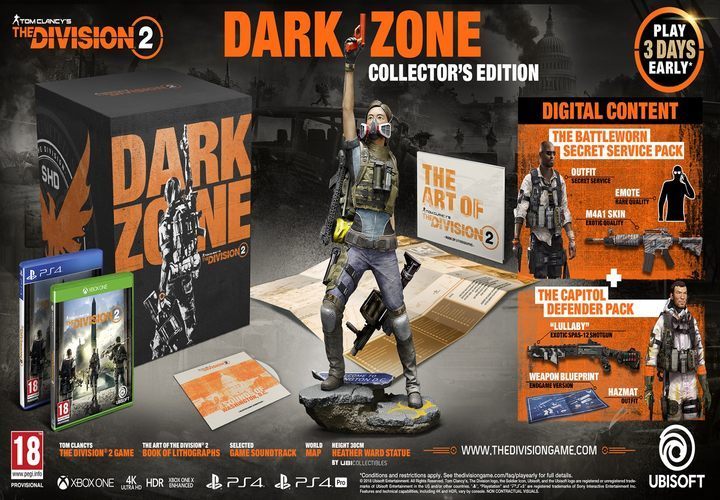 The photo above shows the Dark Zone Collector's Edition, which includes: the game, the Battleworn Secret Service Pack and the Defenders of the Capitol pack, a 30-centimeter figure from Ubicollectibles, depicting Heather Ward, an agent from the second part of the game, a book with lithographs, a map of Washington, a soundtrack with selected compositions from the game and a premium collector's box.

The Phoenix Shield Collector's Edition includes: the game, a pass for 1 year, the Battleworn Secret Service Agent pack, the Elite Agent pack, a figure from Ubicollectibles in 1:6 scale (modifiable), the steelbook (only available at Ubisoft Store), lithographs book, a map of Washington, a soundtrack with selected compositions from the game and a premium collector's box.

The first DLC to Tom Clancy's The Division 2 will be completely free. The year 1 Season Pass includes: early access to story content of all the episodes in year 1, the instantaneous unlocking of specializations (players without a pass can unlock them by playing the game long enough), exclusive access to secret provisions, additional hunts and projects (respectively, 1 per week and 1 per day) as well as cosmetic items.