The guide for The Division is a comprehensive compendium encompassing all aspects of the game. The guide begins with starting tips and a description of basic mechanics of the game; each player beginning their adventure with the game will receive the most important information. Among others, you'll study the mechanics of combat, character development, creating, receiving, and modifying equipment, as well as information regarding statistics, abilities, and perks, along with tips regarding fast character development and choosing the right skills.

The guide also contains a complex FAQ section, where players can find answers and solutions to most difficult problems, both for novice and more advanced players - the ways of acquiring crafting materials, unlocking and upgrading abilities and perks, unlocking access to Dark Zones or improving the performance of the game itself. You'll also receive access to tips for multiplayer matches, both in cooperation as well as PvP modes, both on the world map, as well as Dark Zones, and additional gameplay modes. The guide is concluded by Appendix, which contains the list of controls for each platform, as well as system requirements.

The Division 2 is the second installment of a popular series of action games with RPG elements that focuses on multiplayer modes. This time, the action takes place in Washington, a city that is on a verge of collapse. The lives of ordinary citizens are made difficult by organized groups of mercenaries, bandits and marauders. The player once again assumes the role of an agent of Division, an elite unit leaving the shadow to fight new dangers. Same as the first installment, the action is seen from a third person perspective, but this time, the players receive access to a virtual recreation of Washington, D.C. The game was developed by Ubisoft Massive, and received a release on PC, PS4, and XONE.

Check these starting tips before beginning the game. They will serve to introduce you to the world of this complex title and will come in handy for novice as well as more experienced players.

This section describes the basic mechanics of the game. You'll learn about hunting, equipment and character's weight limit, as well as info regarding statistics and abilities, along with a recommended path of development.

This section of the guide contains chapters explaining all questions regarding equipment. You'll find a description of parameters and talents of the available weapons and armor, as well as a complete list of item sets, along with bonuses that they offer. The chapter also contains information regarding items recommended for various roles in the party.

This part of the guide describes the mechanics of Dark Zones, beginning from the ways of accessing them and unlocking further zones, up to the description of gameplay on these dangerous areas. Moreover, you can also view the talents and statuses that can be assumed by your character, as well as see tips that will be useful when traversing Dark Zones.

FAQ contains answers to all questions that may arise when playing The Division 2. Here, you'll learn how to develop your character quickly, what skills to unlock firsthand, how to get crafting materials, and how to get high-level equipment quickly.

The final part of the guide contains controls schemes for all platforms, as well as system requirements.

Tom Clancy's The Division 2 is an online game that focuses on cooperation gameplay in 4-man (8-man in PvP) groups. Nevertheless, it allows lone players to enjoy most features of the game, but an internet connection is required - you cannot start the game in an offline mode and play single player, as there isn't any.

About The Division 2 Guide 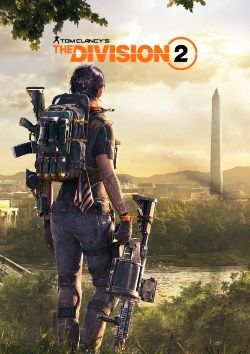 The second installment in the popular action game series (with RPG elements) that revolve around multiplayer experience. Tom Clancy's The Division 2 is a result of cooperation between Ubisoft Massive and other development teams owned by the French publisher.

Tom Clancy's The Division 2 is the second installment in the action game series with clear RPG elements that revolve around multiplayer online experience. The game described herein was developed by the creators of the original game  Ubisoft Massive; however, other development teams owned by the French publisher have also worked on the game, including Ubisoft Annecy, Redstorm, Reflections, Ubisoft Bucharest, and Ubisoft Shanghai. Similarly to its predecessor, in The Division 2, players observe the action from the third person perspective (TPP), and the high-quality visuals are ensured by the modified version of the Snowdrop Engine technology  a graphics engine that was the foundation for the previous installment. Tom Clancy's The Division 2 is available on several platforms.

More About Tom Clancy's The Division 2