On this page of our Minecraft guide you will find a blueprint for creating an Iron Golem along with information about this creature. 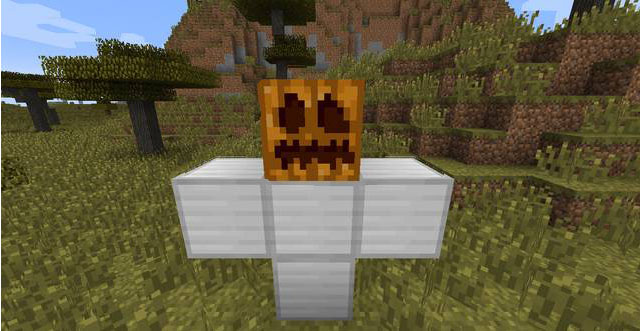 A recipe for the Iron Golem

To craft an Iron Golem, you need to arrange four blocks of iron into the shape of the letter "T" and put a pumpkin where the head should be (the order has a meaning - put the pumpkin as the last one). 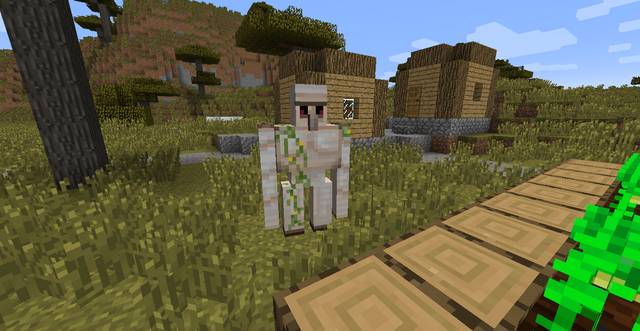 Iron Golems can be met, by default, in big villages of more than 21 houses, where they occasionally spawn and protect the villagers. They are tough and have a strong attack, which additionally throws the opponent far away. Their health bar does not regenerate, but they can be healed with a thrown potion of healing. They are resistant to damage from falling and to drowning. Still, they have this annoying custom of exploring the world if they currently are not in a village. You can make one follow your character and protect you, using the lead.

While following your character, it will attack any hostile creatures. However, it cannot deal with Creepers, because they, most usually, explode before the golem can destroy them, as well as with Endermen, who are much faster and have the health factor much higher. Even if the golem has been created by you, and you attack a Villager - the golem sides with the Villager and attacks you. In a direct fight, the iron golem is a demanding opponent.

While crafting an Iron Golem you, first of all, need to make sure that you do not craft it in small rooms, or next to walls - after it is crafted, it can get stuck in the wall and lose its health until it dies. They are vulnerable to fire (therefore, also to lava), weapon, poison and choking e.g. under sand. While underwater, it stops attacking and moving. After it dies, it drops 3-5 pieces of iron.