From this chapter of the Baldurs Gate 3 guide, you will learn how to easily and quickly defeat the Owlbear, as well as what reward you can get after completing this task related to it.

Owlbear is one of the stronger opponents you'll encounter as you explore the vast world of Baldurs Gate 3. You will find the creature in its nest, which is located near the Druid Grove. The main reason why the owlbear can be aggressive is simply his duty to protect his cubs. It should be noted here that the fight with the owlbear is completely optional and does not need to be undertaken, but it has its benefits - additional rewards and experience points. 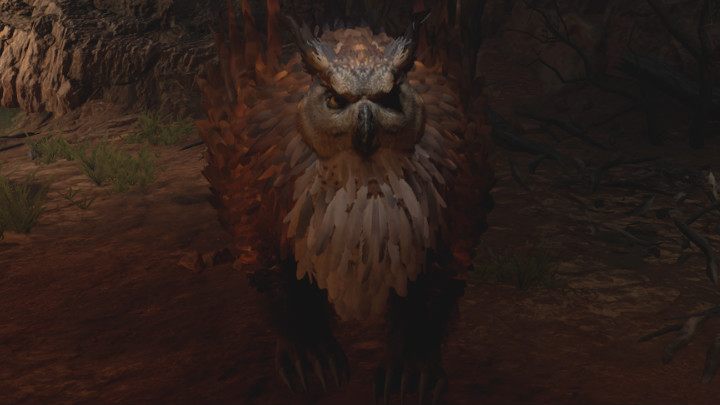 Owlbear Nest - how to reach this location?

You can easily get to the Owlbear Nest from the Druid's Grove. The road to this location should not take you more than 1 minute if of course, you choose the shortest path possible. If you are at a considerable distance from this location, use one of the checkpoints: at the Druid Grove or in Blighted Village. 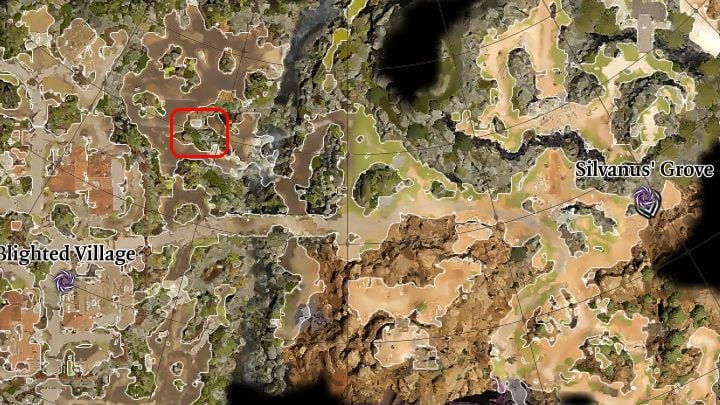 The image above shows the place where the Owlbear Nest is located. You can easily get there by leaving the Druid Grove and taking a path through the forest. Then you will reach a waterfall and a rushing stream. 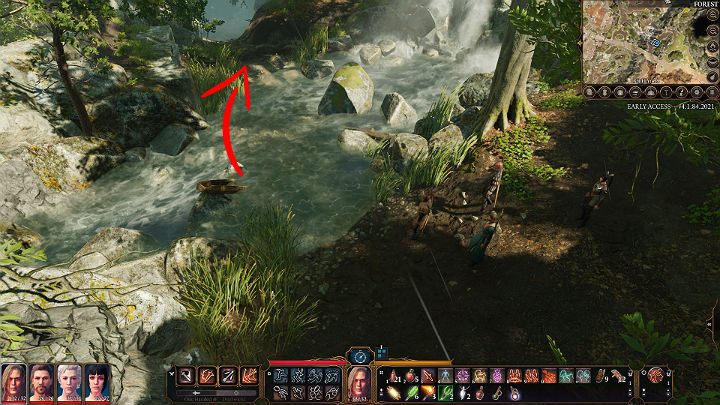 To get to the Owlbear Nest, you will have to cross the stream, and then follow the path down to the cave.

Just before the start of the fight with the Owlbear, consider casting auxiliary spells like Bless, which will provide heroes with a bonus to attack and defensive rolls. This is also the best time to use the Mage Armor spell to increase the armor (KP) of team members who are more vulnerable to damage (mages). 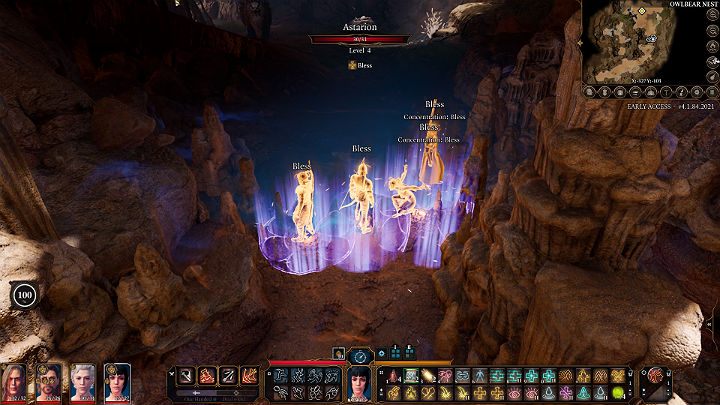 If you don't want to kill the Owlbear Cub, you're gonna need some kind of control spell to exclude it from the fight. If you have a mage on your team, we recommend Sleep. In case your team doesn't has any mage available, you can always use the appropriate Scroll. It is important that Sleep should be at level 2, because level 1 of the spell will not be able to put Owlbear Cub to sleep. 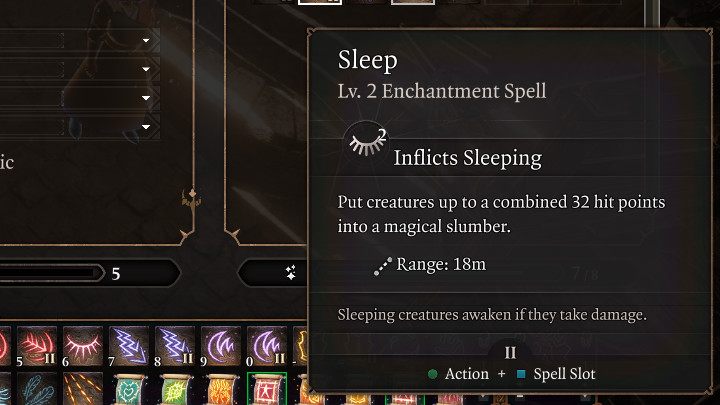 The fight against the Owlbear takes place in a dark cave, so heroes who do not have the ability to see in the dark will have problems fighting. If possible, use one of the spells that will illuminate the darkness, such as Dancing Lights. 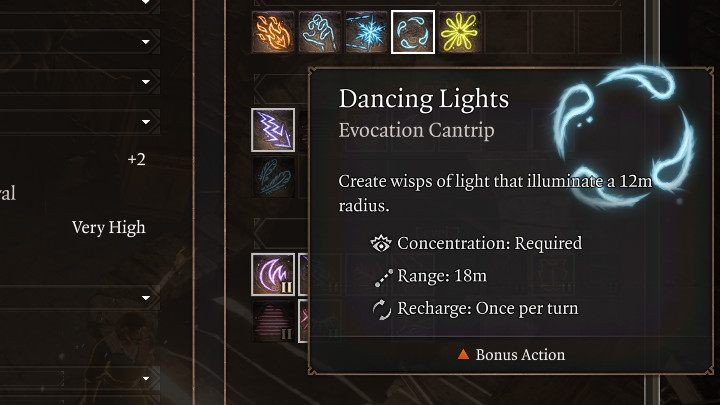 During the fight, the Owlbear will try to shorten the distance separating it from the party members as much as possible in order to attack with its sharp claws. For this reason, your heroes will receive a negative Threaten effect, which causes their ranged attacks (from ranged weapons, as well as some spells) to have reduced effectiveness. Before you attack you will need to move a little away from the target to increase your chance of inflicting damage. 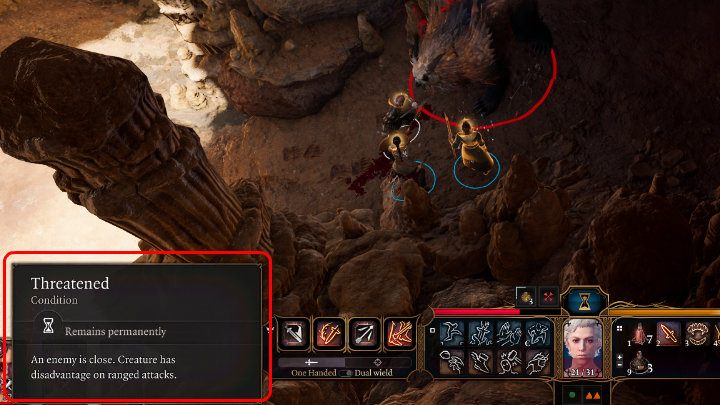 It is also worth noting the fact that the Owlbear can perform automatic attacks at the moment when one of your companions will try to move away from him. Before you take a step in any direction, make sure you won't be punished for it. 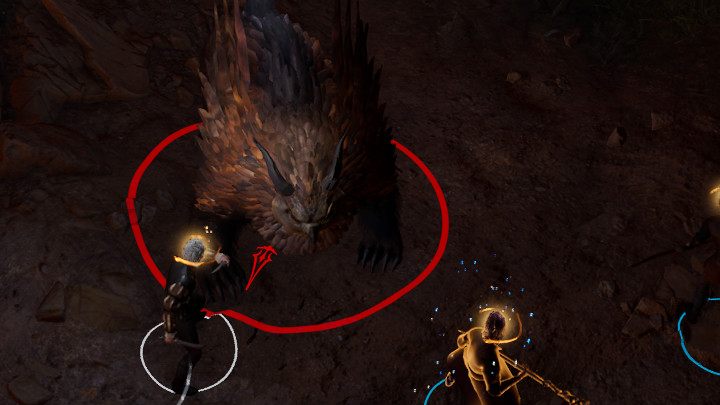 If your character is to be a target to an automatic attack, a red arrow will appear next to the Owlbear indicating the place where he can receive a blow. Of course, there may be a situation in which the enemy does not hit the target, but don't risk it at a time when one of your party members is low on health.

Fight with the Owlbear is not easy, especially at a low experience level. If you want you can first try to talk to this opponent, but it will be better to start the fight yourself to gain an advantage. 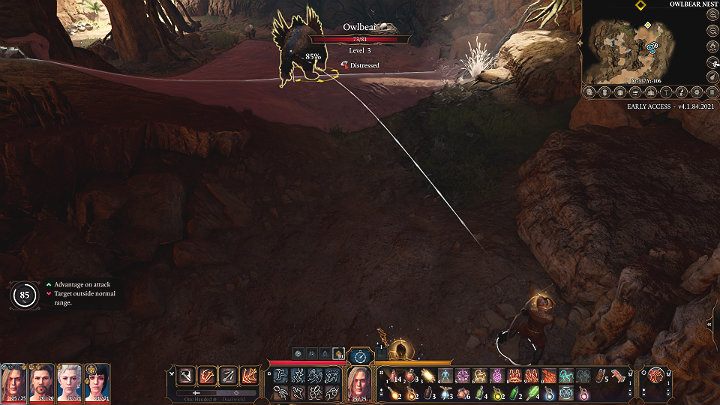 It is best to start the fight with a surprise shot when the enemy turns around and starts patrolling the rest of the cave - this will cause a surprise effect through which the enemy own turn will be skipped and you will be able to conduct a second attack. While sneaking, be careful not to enter the area of vision of the Owlbear, which is marked in red. 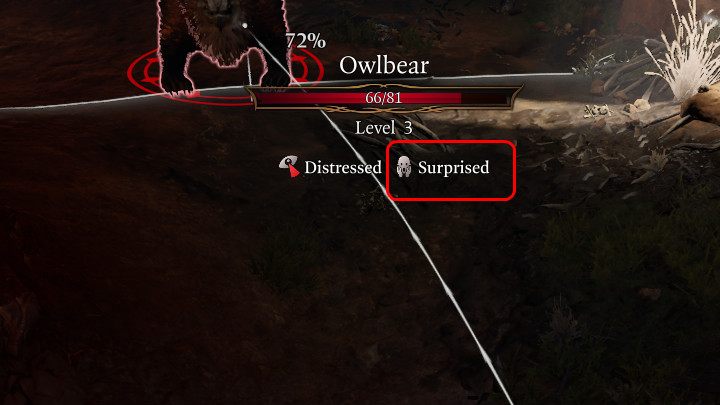 In the picture above, you can see the negative effect imposed on the opponent when he was attacked from the back. He did not expect the attack, so he got Surprised, and thus will not perform any actions in the first turn. 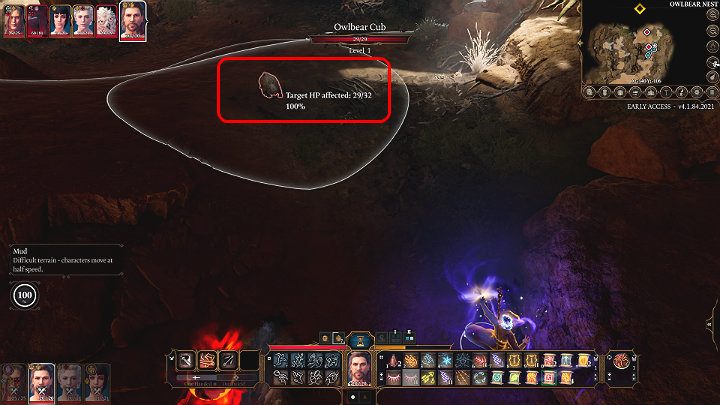 If you don't want to kill the Owlbear Cub, you'll have to put him to sleep or immobilize him as soon as he joins the fight. You will need a Level 2 sleep spell to effectively put your opponent to sleep, as the Owlbear has 29 health points.

If you decide to spare the Owlbear Cub, you can invite him to your camp at a later time. If you are interested as how to do this, you will find detailed instructions on another page of this guide. 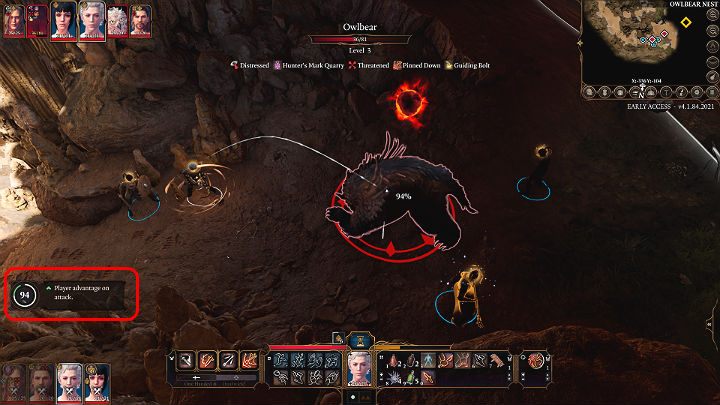 During the fight with the Owlbear it is worth keeping him in one place or at least out of range of any of the team members by immobilizing or reducing his movement speed, for example, by pinning it down (through bow attacks) or by using one of the spells like Ray of Frost. It is also worth using any spells that will give your characters an Advantage on Attack, such as Cleric's Guiding Bolt, which maintains its effect until the next turn. 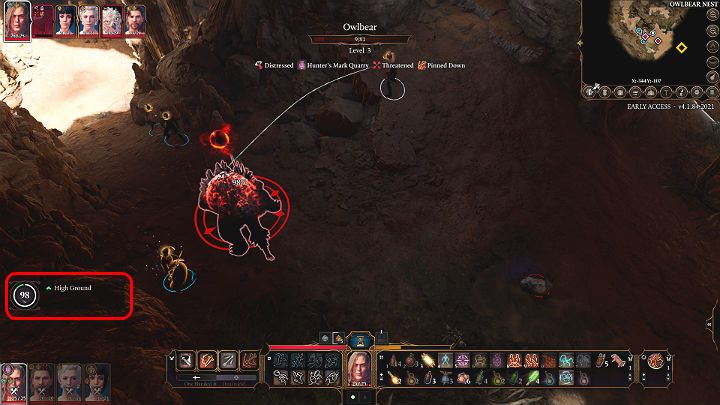 It will also be important to find an elevated position, especially when your character uses ranged weapons (short or long bow) or uses spells that gain a height advantage bonus like the Warlock's Eldritch Blast.

Owlbear has to be eliminated as soon as possible, so during your own turn, choose attacks and spells that cause as much damage as possible and have the best chance of hitting the target. Some of the spells, such as Sorcerer's Magic Missile cannot miss - use them.

Defeating The Owlbear will, of course, be rewarded accordingly. In the belly of the defeated creature, you will find the object necessary to create the Vision of the Absolute - Head of a Broken Spear. In the nest, you will find an Owlbear egg, which is worth a real fortune, and after searching the nearby skeleton, in addition, a rare item - The Oak Father's Embrace. 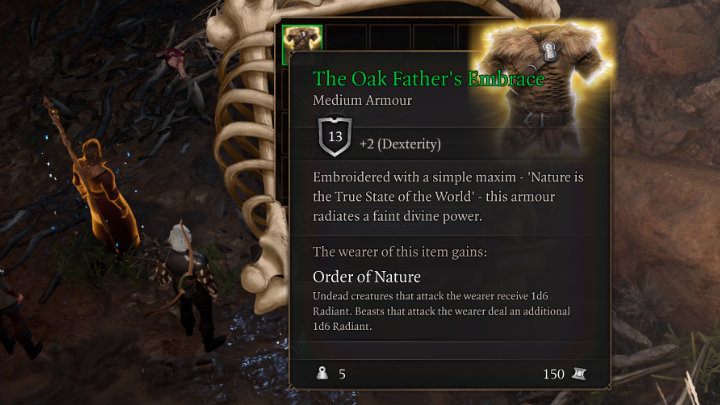 This is a very good item classified as light armor, which has 13 armor and adds 3 points to Dexterity, as well as an additional trait - Order of Nature, thanks to which undead creatures attacking the hero receive an additional 1d6 light damage. The downside of this item is that attacking animals will additionally deal 1d6 damage to the character who wears it, so it is worth changing the armor before proceeding to such a battle.