The following guide to Baldur's Gate 3 contains a complete set of information about the next installment of this cult RPG series. Here you will find basic information that will help you finish the game.

The guide currently contains information based on the preliminary materials. At this point, you can find chapters focused on e.g. combat mechanics, the character creation system, and dialogs.

After the release of the full version of Baldur's Gate 3, the guide will be expanded. It will contain, among other things, a full walkthrough and an extensive FAQ section with answers to questions that may arise during the game.

Guide in progress. Based on Early Access version. It will be updated as the game develops.

For more tips, check out the Beginner's Guide section.

Quests in the prologue and first chapter of Baldur's Gate 3

Below is a list of all the quests available in the prologue and the first act of Baldur's Gate 3 – this is the entire content available in the Early Access version. Descriptions of all quests can be found in our walkthrough.

Here is a compilation of maps of locations available in Baldur's Gate 3. Our world atlas has high-quality maps of the main areas on which we marked, e.g. interesting places to visit, important NPCs, tough monsters, or unique treasures and secrets.

Secrets and puzzles in Baldurs Gate 3

Below you have a list of the puzzles and their solutions found in Baldur's Gate 3. Solve difficult puzzles to unlock secret passages or find various secrets. Each puzzle has its own solution in the Solutions to puzzles chapter.

In the FAQ section of our guide, we have listed the common problems that can be encountered throughout the game and explained some of the more complex gameplay mechanics.

The Early Access version of Baldur's Gate 3 has 6 character classes. We have listed them below.

You will find pages on creating and developing your character, as well as managing the party.

Full PC system requirements, as well as the most common bugs, errors, and glitches are described on separate pages.

The Early Access version of Baldur's Gate 3 includes the first out of the three acts. It should take you about 25-30 hours to complete the first chapter.

The playtime can be significantly longer if you try to create more characters and experiment with character builds and party formations. Baldur's Gate 3 also has many choices and minor changes depending on previous decisions, character attributes, or party attitude. All this encourages the player to repeat the quests.

The plot in Baldur's Gate 3

The story in Baldur's Gate 3 is unrelated to the previous installments of the series – it takes place about a hundred years after the events presented in the Throne of Bhaal. The story begins with the invasion of the Illithids (also known as mind flayers) on the eponymous city – Baldur's Gate.

Some of the inhabitants were kidnapped during the attack and then turned into a Mind Flayer. This is caused by an embryo that feeds on the host's brain.

You play as a character who managed to avoid being kidnapped. However, you were infected with one of these embryos. At first, the main character tries to get rid of the parasite. However, they slowly discover that thanks to it, they have abilities unavailable to healthy people.

Will Baldur's Gate 3 be released on consoles?

The Early Access version of Baldur's Gate 3 is available only on PC. The final version of the game is expected to get console ports, probably for PS5 and Xbox Series X.

When will Baldur's Gate 3 be released?

The release date of Baldur's Gate 3 is currently unknown. The Early Access version debuted on October 6, 2020. It includes the prologue and the first out of the three acts of the campaign.

The Early Access version of Baldur's Gate 3 will include the first out of three acts. In total, this will give you approx. 30 hours of gameplay.

The Baldur's Gate series is based on the table-top game Dungeons & Dragons. The first two parts of the series were developed by BioWare and released by Interplay Entertainment. Due to the publisher's financial problems, its brand rights expired.

Since then, there have been rumors of the studio working on the third game. However, it was not until mid-2019 that Larian Studios announced they were working on Baldur's Gate 3.

Can you pause the game?

No, Baldur's Gate 3 does not have the option to stop the game completely. Even if you press the ESC key or open any menu, the game will still run in the background. This can theoretically lead to an unwanted fight if there are any opponents in the area close to the party. Fortunately, the game uses a turn-based combat system – you don't have to rush with giving orders to the party members.

Where are the save files stored?

Knowing about the directory for Baldur's Gate 3 saves can help you, for example, make a copy of them. For the PC version purchased on Steam, the default location of the save files is:

A catalog with a large number of automatic, quick, and manual saves will take up a few hundred megabytes on a hard drive.

How to cancel an action?

To cancel a command (e.g. melee attack or a spell), you can press the right mouse button or the ESC key. This is helpful if you want, for example, to choose a different skill or to move to a different place before using a given attack.

Can you have more than one character created? 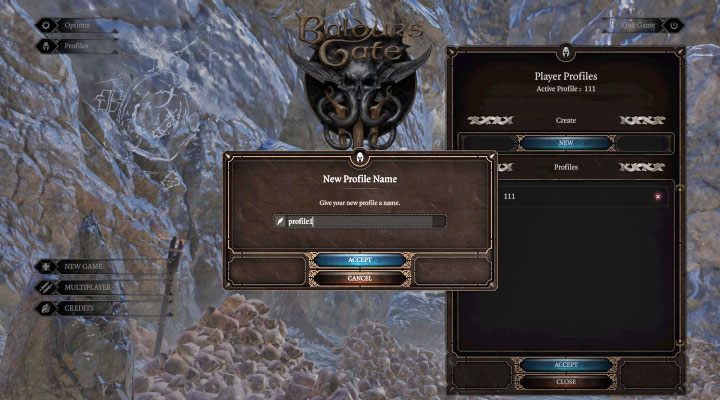 Yes, you can create more custom characters. Each of them will become a separate profile that you can name. To switch between characters/profiles, you need to go back to the main menu, click on the Profiles button, and select a profile you want to use. This is a good idea if you want to play the game with characters representing, for example, different races and classes, genders, or backgrounds.

No, despite some similarities with previous Larian Studios games, Baldur's Gate 3 has its own identity. The whole game is based primarily on the D&D rules – this is very important in combat, character development, and skillchecks.

BG3 has a lot of elements known from both parts of Divinity Original Sin - the game has a lot of choices, the graphics style and way of presenting the action are similar, and the environment can be very interactive which is useful during combat and exploration.

12 Studios That Seem to Be Making the Same Games, But We Love Them Anyway

It takes skill to copy. Some game creators know this, regularly serving the fans similar titles. Their elements, however, are skillfully mixed and served in such a way that players – instead of complaining – are delighted and ask for more.

The countdown to 2022's biggest releases can begin – especially since potential blockbusters are just around the corner – coming in February! So here's an editorial ranking of the most anticipated games in 2022.

Can We Take a Moment to Admire the Hair in Baldur's Gate 3?

Hair in RPG games is a serious matter. You can laugh as much as you want, but in Baldur's Gate 3 this aspect has been refined like no other game.

Although the biggest hits won't come until November, October is still quite interesting with a diverse suit of video games to cater to all needs.