This chapter of the Baldur's Gate 3 guide describes a ready Wizard build. We suggest which race works best as a Wizard, how to best spend ability points, what equipment and spells to choose, and what skills to select.

Wizard is one of the most powerful character classes available in Baldurs Gate 3. Wizards deal significant damage to one target and/or a larger group of opponents at a time at the cost of low armor class and few lifepoints. In the presented Wizard build, we focus on the Evocation specialization (subclass), which allows your hero to wield the energy of powerful elements.

When creating a new Wizard character, it can be assumed, of course, that the hero will use the rare item called Warped Headband of Intellect, which sets the character's Intelligence at 18 points. This item can be acquired after about a few hours of gameplay, however, it is still the early access (EA) version of Baldurs Gate 3 and it is not known if the properties of some items will be changed while others might be removed completely. In such a case, you wouldn't assign enough ability points to Intelligence, and your Wizard would become less efficient. 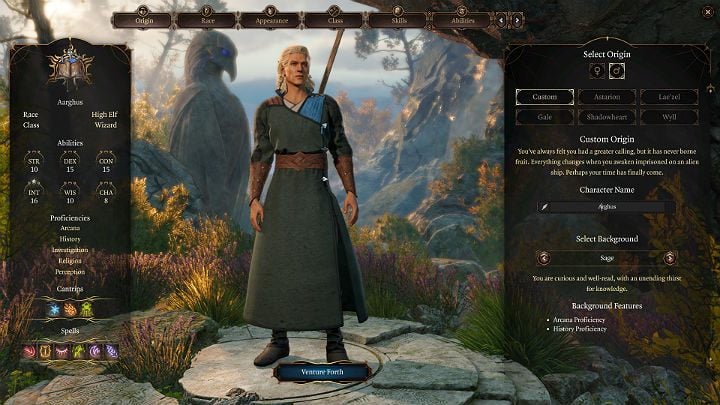 When choosing the right race for the Wizard class, it is definitely worth choosing the High Elf. Below is a list of all the significant bonuses your character will receive.

From all the High Elves' cantrips available, we suggest choosing Dancing Lights.

If for some reason you don't want to play as a High Elf you can also opt for the Half-Elf or a Tiefling race. It should be noted, however, that you will then have to additionally develop Charisma.

When choosing the background for your Wizard, it is worth choosing between options that benefit from the developed Intelligence, and avoiding those that guarantee skills related to Charisma, which we won't develop in this build.

Some Wizard's spells are complicated enough to require concentration so that their effect is not interrupted. Unfortunately, concentration is not a lasting effect and can be interrupted in several ways. 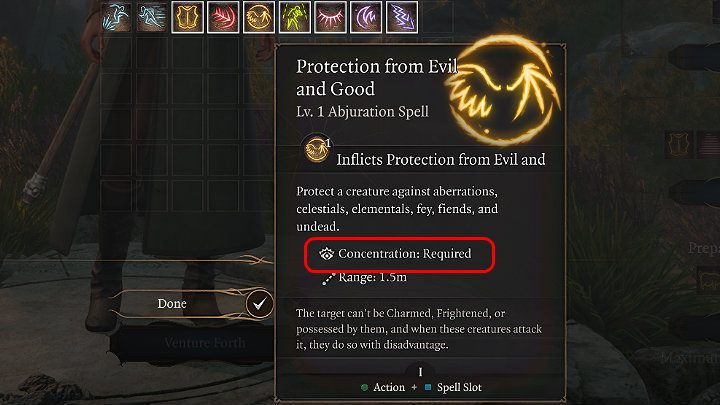 As Wizards must maintain concentration when casting certain spells, we invest some points in the Constitution.

When choosing skills for your Wizard, pay particular attention to those that will benefit most from his most developed abilities, such as Intelligence and Dexterity. 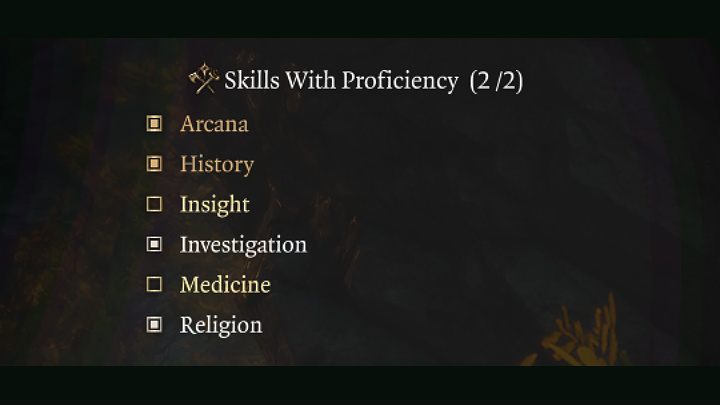 When developing Wizard's abilities, one must first focus on Intelligence as the ability responsible for Spellcasting. Then it's worth assigning points to Constitution and Dexterity. 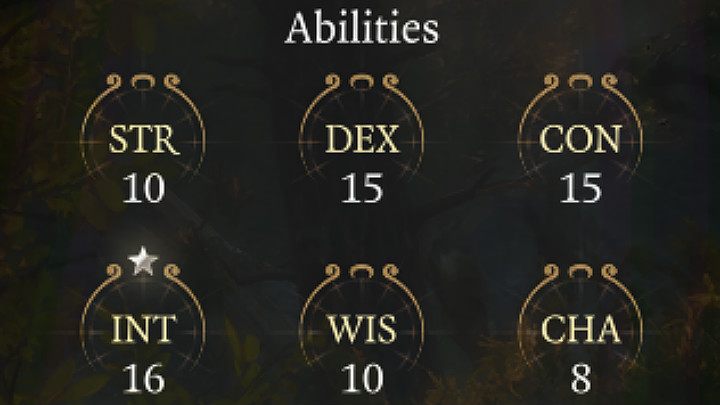 We propose to allocate the ability points for your Wizard as follows:

The Wizards gain their knowledge of spells from many sources, one of which is the scrolls you will find when exploring the vast world of Baldurs Gate 3. When you find a spell scroll that you don't know yet and you want to learn it, just click on it and choose the spell learning option which will cost 50 gold pieces. 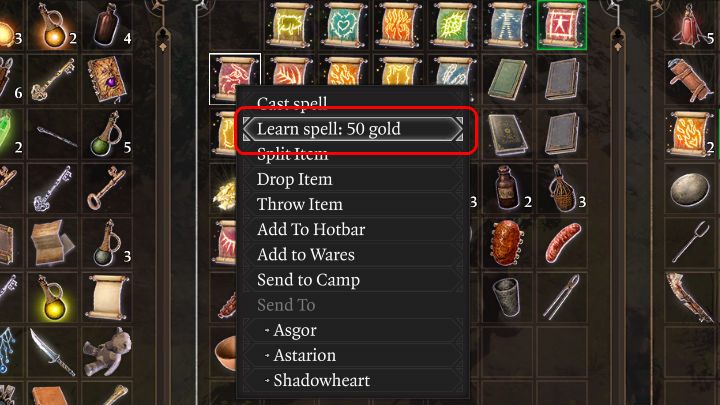 By creating a Wizard-class character in Baldur's Gate 3, you will be able to choose 3 Cantrips that your character will be able to use. When looking at the list of available spells, we particularly recommend Ray of Frost, Fire Bolt, and Poison Spray.

Due to the fact that Cantrips can be used in every round with no limitations, you should select ones that you will be definitely using. Attack spells are a good choice because you will be able to continually damage your opponents without losing your spell slots.

Wizards have the largest pool of spells of all the characters available in the game, and during character creation you can choose the ones that your character will have at the beginning of the game. We particularly recommend Magic Missile as an extremely useful attack spell, Mage Armor that will greatly enhance your hero's defense, and Sleep as a useful control tool.

Unlike the previously described Cantrips, spells use a slot when being cast which means they cannot be used indefinitely. You renew your magic slots after a long rest in the camp.

If you are curious about what level 2 spells the Wizard has, you can check them all on a separate page of this guide.

From the start, a Wizard has access to a special action that he can use once per day.

Due to the fact that Arcane Recovery is part of the action, try to use this ability before starting a fight so as not to lose a turn in which you can perform an attack to regain the spell slots.

A Wizard is a character class who relies on spells to deal damage to opponents in every possible situation. Wizard uses pole weapons (stick, staff), which often provides him with additional properties and bonuses. Your Wizard should wear Robes so you can still use the Mage Armor spell. 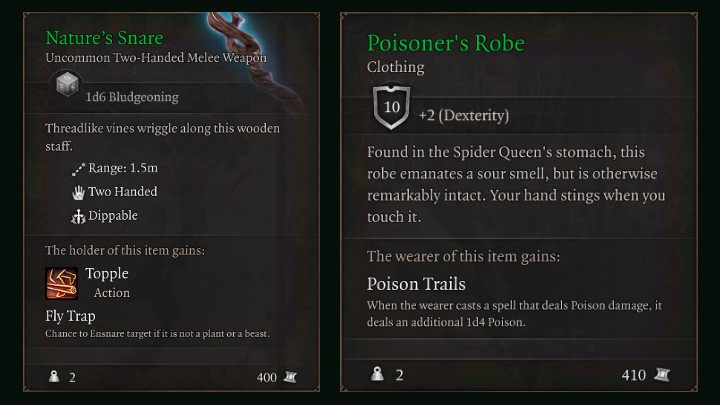 Poisoner's Robe, which causes additional Poison damage when the Wizard uses spells based on Poison damage, is found in the stomach of defeated Phase Spider Matriarch. If you do not know how to defeat this strong opponent, you will find a detailed description of the fight on a separate page of this guide.

After reaching level 2, a Wizard will have to choose one of two specializations (subclasses). If you choose the Evocation School, your character will be able to use spells that focus the energy of powerful elementals. The Evocation School is a perfect choice for Wizards who prefer to focus on causing as much damage as possible. By choosing this path you will also get an additional passive ability. 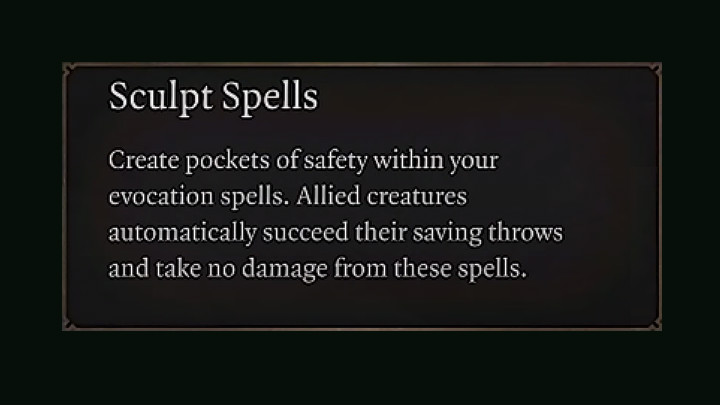 After reaching experience level 4, you will be able to improve your Ranger's abilities by spending additional 2 points on chosen abilities. This is the best time to increase the value of the Intelligence ability to 18 points.

Before you play as a Wizard in Baldurs Gate 3, you should know a few key tips that will bring you even closer to this class and significantly affect your hero's effectiveness during combat.