This chapter of the Baldurs Gate 3 game guide describes a ready Ranger build. We suggest which race works best as a Ranger, how to best spend ability points, what equipment and spells to choose, and what skills to select.

In Baldurs Gate 3, Ranger can be developed in many ways. Ranged combat enthusiasts can focus on using short and long bows, while fans of a famous Drow Elf named Drizzt Do'urden can opt to use two weapons at once (dual wielding) and engage in melee combat. In the proposed Ranger build, we focus on ranged combat and the Hunter specialization (subclass) because we believe that this playstyle produces the best results. 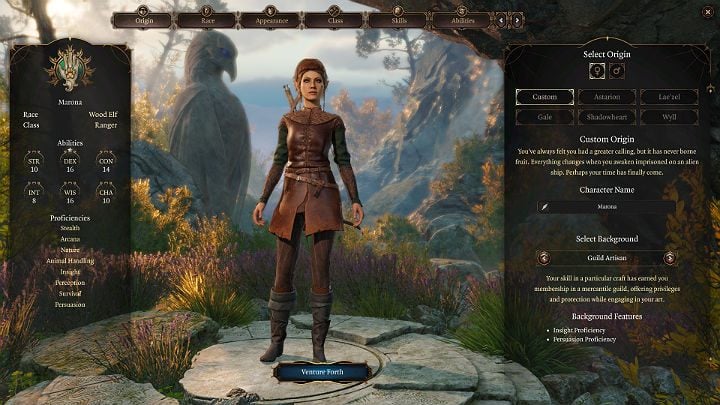 When choosing the right race for the Ranger class, it is definitely worth choosing a Wood Elf. Below is a list of bonuses your character will receive.

If for some reason you don't want to play as an Elf, you can also opt for Strongheart Halfling. The race bonuses you get are +2 to Dexterity and +1 to Constitution, plus proficiency in sneaking.

When choosing a background for your Ranger, it is worth choosing options that benefit from a developed Wisdom ability and avoiding those that guarantee skills related to Intelligence that Rangers don't develop much. As a reminder, Rangers use Wisdom to cast spells. There is no need to focus on a background that grants proficiency in sneaking, as you will gain this ability as the Wood Elf race.

By creating a Ranger-class character in Baldur's Gate 3, you will be able to choose your Favored Enemy, which in turn will provide your character with additional skills or properties. We particularly recommend two options: Bounty Hunter or Sanctified Stalker. 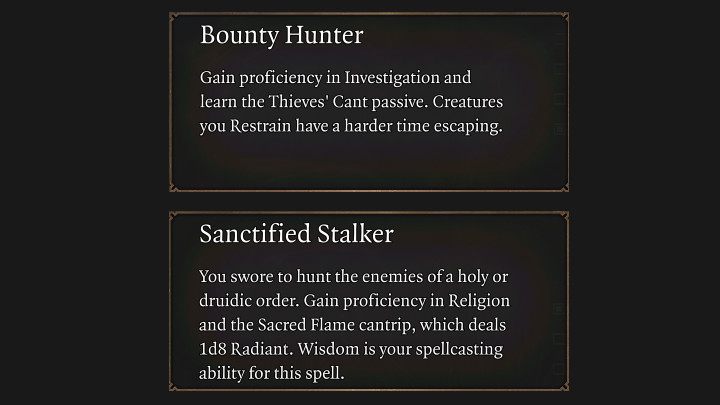 Natural Explorer is a class-based ability of the Ranger that gives him an advantage in combat under certain conditions or provides other useful skills. We particularly recommend two options: Beast Tamer or Urban Tracker. 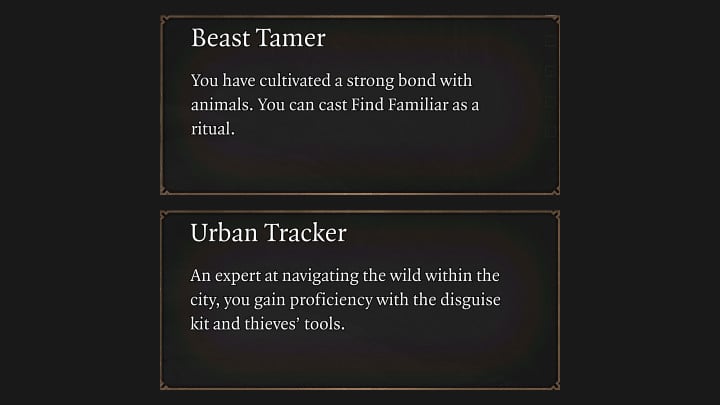 If your hero is going to be the only character on the team who can pick the locks, it's definitely better to choose the Urban Tracker. However, if you want to keep Astarion on the team, it is worth noting that he is already proficient in the use of Thieves Tools so you can go with the Beast Tamer.

When choosing skills for your Ranger, pay particular attention to those that will benefit most from Ranger's main abilities such as Dexterity and Wisdom. Avoid those associated with Intelligence. 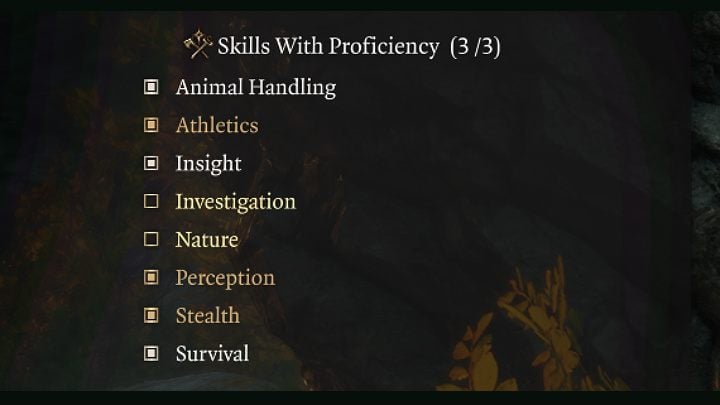 In developing the Ranger's abilities, one must first focus on Dexterity and Wisdom - the ability that allows Rangers to cast spells (Spellcasting). The third ability worth considering is Constitution. 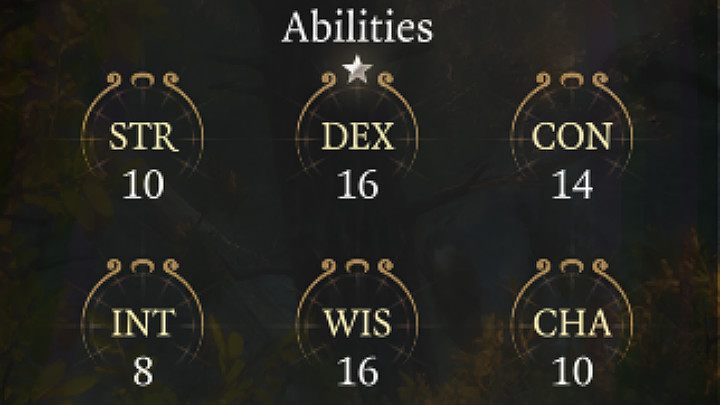 Our proposition of assigning Ranger's points is as follows:

When choosing a weapon for your Ranger, we suggest opting for a long bow and two one-handed weapons, such as short swords. With this combination, your hero will be extremely effective in ranged combat, and will also be able to quickly finish the target off with the bonus action gained by carrying two one-handed weapons - Offhand Attack. Your Ranger should wear light armor, which provides a Dexterity bonus. 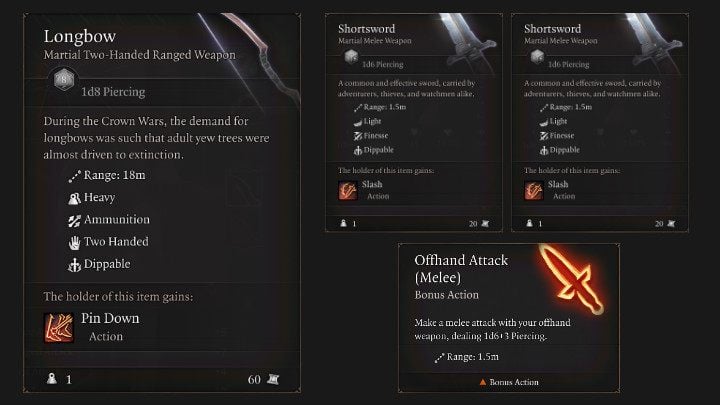 It should be noted here that the Offhand Attack to which your hero will have access after equipping him with two one-handed weapons is a Bonus Action. This means that in a single turn he can shoot from the bow (action) and then finish off the opponent with a bonus action - Offhand Attack.

Upon unlocking experience level 2, Ranger is given the opportunity to choose his preferred fighting style. Because the described build is based on a character using a bow, we suggest choosing Archery.

By choosing the Wood Elf race and Archery fighting style, the hero will receive a significant point bonus to attack rolls whilst using bows. 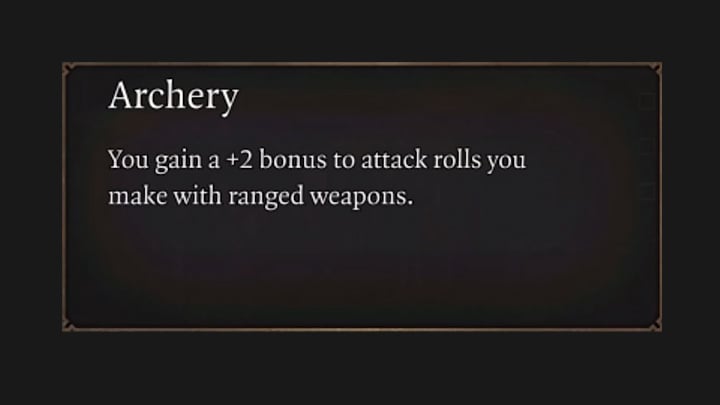 Once you have selected the spells, you will not be able to change them until you have advanced to the next level of experience, and the spent spells only renew after a longer rest.

After reaching level 3, a Ranger will have to choose one of two specializations (subclasses). In this build, we focus on the Hunter subclass, which will greatly increase your hero's combat capabilities. By choosing this subclass, you will be able to choose one of three powerful passive skills. We suggest you choose between the Horde Breaker and the Colossus Slayer. 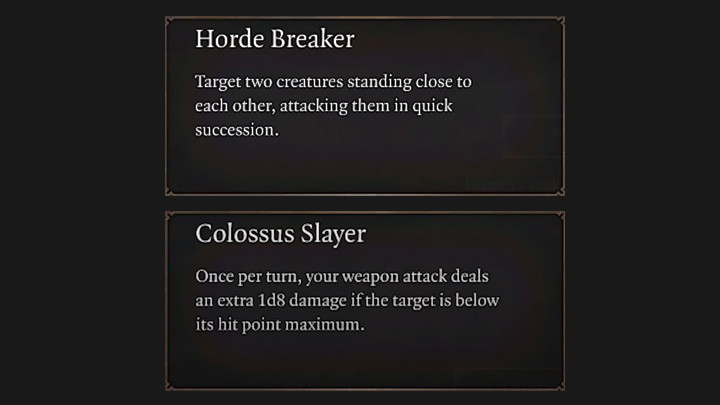 Although the description of the Colossus Slayer skill in Baldurs Gate 3 Early Access suggests that the target must have fewer health points than its maximum, in practice, the passive skill is enabled during each attack in a given round - on all targets, regardless of their health level. It is possible this is a bug and will be fixed in future updates.

After reaching experience level 4, you will be able to improve your Ranger's abilities by spending additional 2 points on chosen abilities. This is the best time to increase Dexterity to 18 points.

Before you start playing Baldurs Gate 3 as a Ranger, you should know a few key tips that will greatly affect your hero's combat effectiveness and help you choose the right targets. 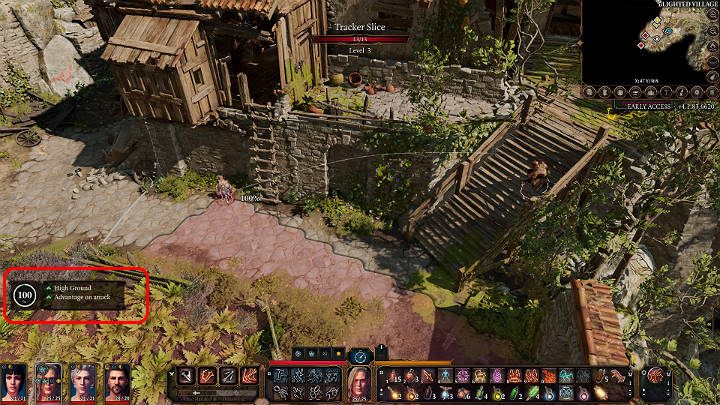