To start a battle, you just need to choose your own army and move it to the position of the enemy's army. When both armies meet, you'll see a panel with basic information. 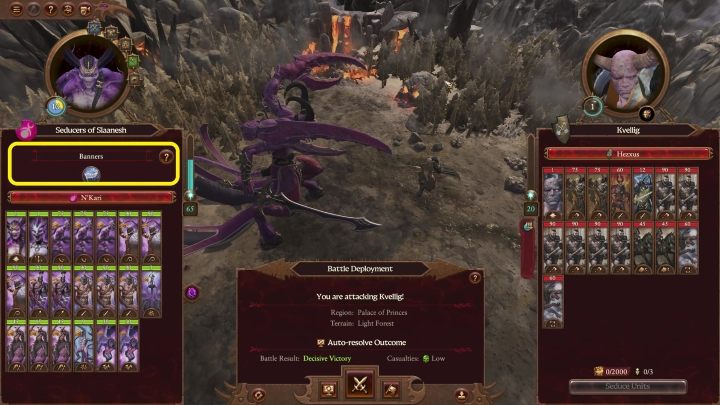 On the left and right side you can find information about both armies - their numbers, units, etc. Pay attention to the Banners section above the units and the name of the lord, though.

You ca receive Banners for the battles you've won. If you put such a banner in the commander's inventory, then you will be able to give it to one unit before the battle. It will give them various bonuses. Choose carefully, as it only affects one unit. 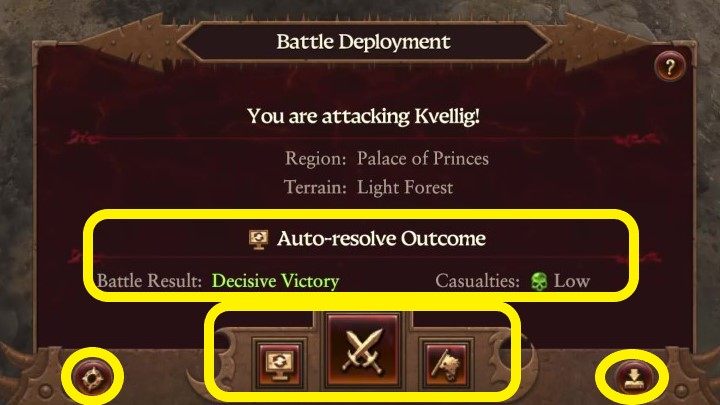 The most useful information are in the center of the panel. In addition to the name of the province and the type of terrain, you will also learn what kind of victory (or defeat) awaits you if you hand the battle over to the AI, as well as what is the estimated number of casualties (although these are not exact numbers).

Below, in the bottom middle, there are 3 buttons. From the left:

In addition, there are two more smaller buttons to the left and right. The former will display the battlefield preview, the latter will allow you to quickly save the game. 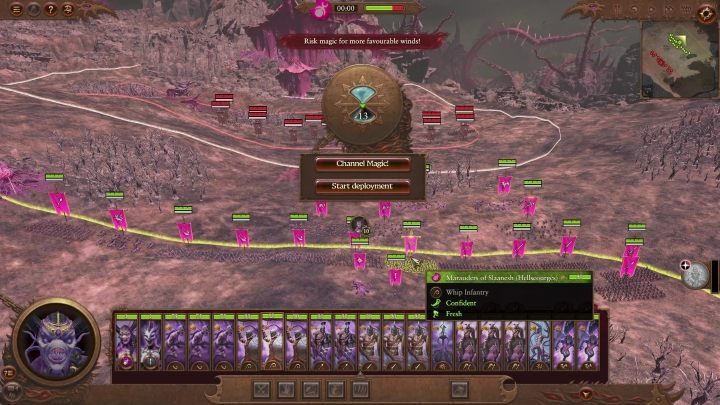 Almost every battle starts with drawing Winds of Magic (you can read more about them on a separate page: Winds of Magic). This "roulette" determines your starting mana.

Then, the deployment phase begins. The battle area is divided into 3 parts:

This phase is especially important if you are on the defense. It allows you to deploy troops precisely without worrying about an incoming attack. 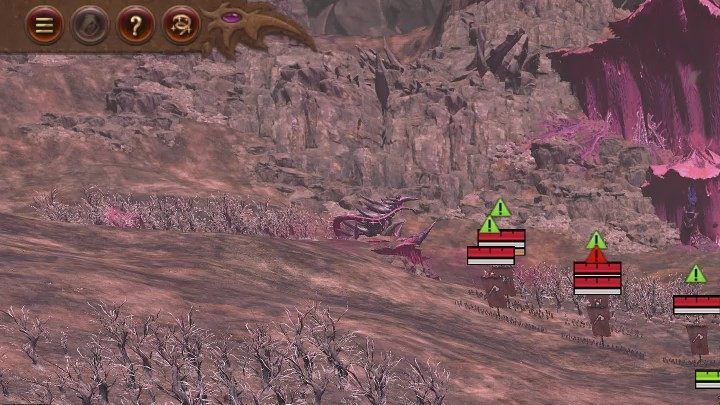 The top left corner contains various options. starting from the left: you can go to the menu, select the advisor's last tip, go to the game's general help page, and view the list of the faction's units and spells. 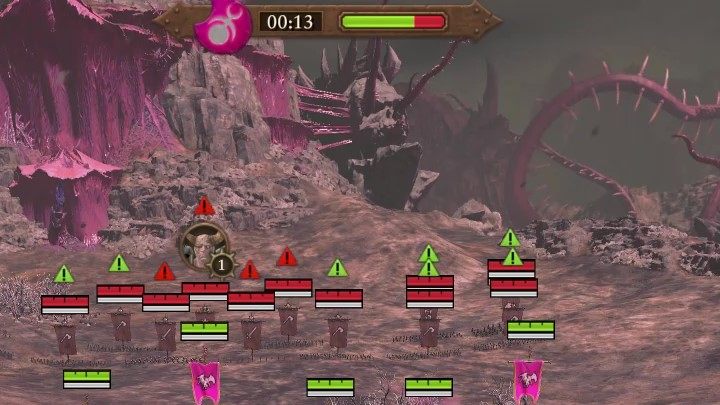 At the top, in the center of the map, there is a timer - it shows how long the battle has been going on for. Next to it, you can see the battle scales. It shows the overall dynamic of the fight with respect to the strength of the units and their numbers. The scales only count the units that are currently on the map. This means that any reinforcements don't count. 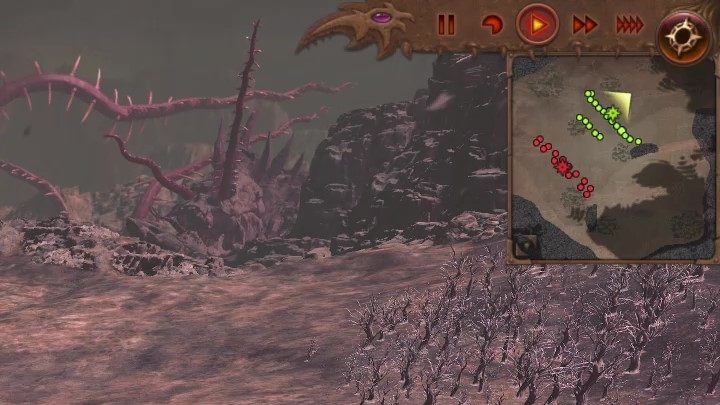 In the top right corner you can see the time manipulator. Use these buttons to slow down, stop or speed up the course of the battle.

The button next to it (compass) will allow you to immediately move to the tactical view of the battle. This means that the camera will zoom out as far as possible, allowing you to see the entire map and deploy your units.

Slightly below there is a minimap that you can zoom in and out. 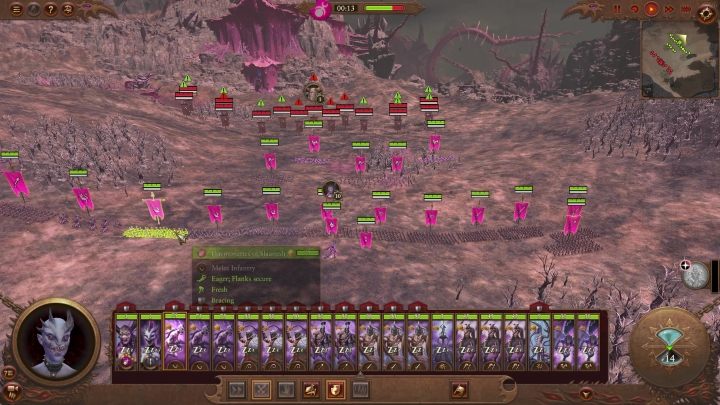 Your unit tabs are at the bottom of the screen. The portrait of the currently selected unit is to the left, while to the right there are army spells and the current state of your "mana" (you can read more about it on a separate page: Winds of Magic) 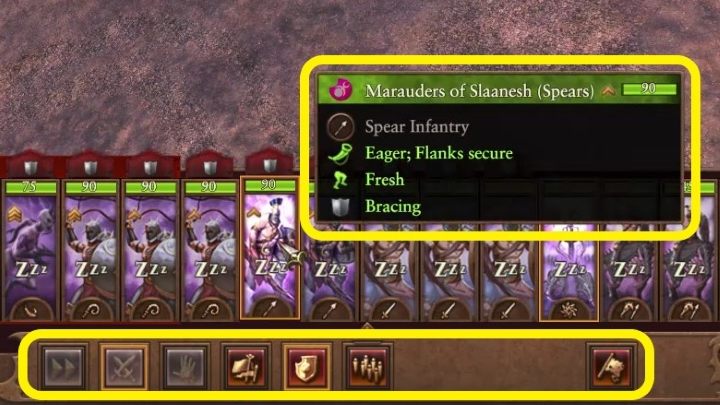 If you hover the cursor over a unit, you will see information about its condition. Here you can see if it's fresh and eager, and what kind of unit it is.

Below the unit portraits there are buttons that allow you to give orders to your troops. From the left: 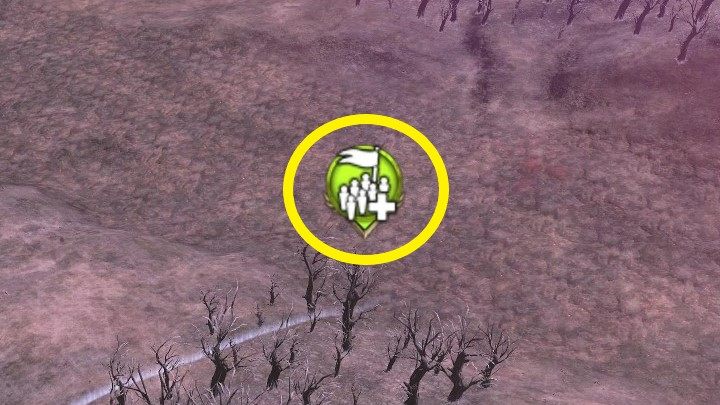 If more than one army joins the fight, then you'll see a marker in the corner of the map (it will be red for an enemy unit). Its position largely depends on how the armies were deployed on the campaign map.

However, you can change the arrival locations of your reinforcements by moving this marker along the end line of the map. This will increase the waiting time for the reinforcements, though (the further you move, the longer you have to wait).

During a battle, you also need to account for the type of terrain. Sometimes there are natural obstacles on the battlefield that can provide a very good cover or protection for the flank/rear.

Some units can also hide in the forest from the enemy. This allows for ambushes and more complex tactical maneuvers.

If you're positioned on a hill, you'll have a significant advantage over the enemy. It will give you a bonus to defense and to your shooting units.