On this page of the guide to Total War Warhammer 3 you'll find information about the strategies that can be implemented by the Nurgle faction. You'll also learn about its lords as well as its army's strengths and weaknesses.

The Nurgle army has strong melee units. The flying units of this nation are also quite strong. Unfortunately, artillery, shooters and cavalry aren't that impressive. Nurgle units also don't have thick armor, but they at least have it. The great advantage of this race is a high level of HP and the ability to attack with poison that weakens the enemies. 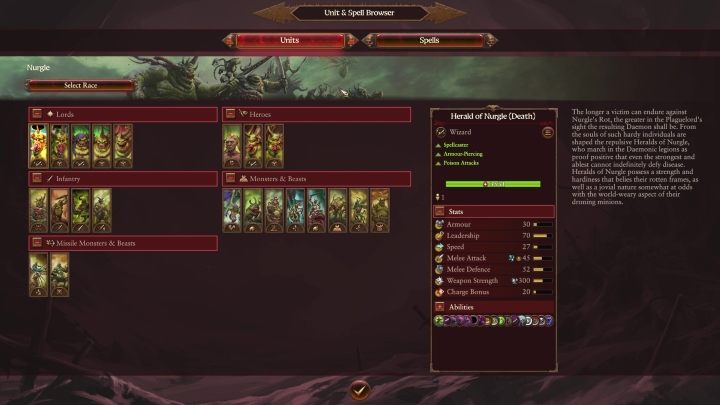 Among the melee units, the Spawn of Nurgle is definitely worth mentioning. It is a solid unit, but its greatest advantage is the relentlessness, which ensures that it won't retreat from the battlefield. You should also add the Beasts of Nurgle to your army. These creatures have tremendous "weapon power" and can regenerate themselves. The Plaguebearers of Nurgle can also be useful - this unit is quite fast by this race's standards, and has decent armor. If you can afford it, upgrade them to the Exalted version.

Unfortunately, Nurgle units are not the most mobile, so make sure you have some flying units on hand. Your fastest unit are the Chaos Furies (Nurgle) which is a good enough reason to add them to your army, especially at the first stage of the campaign. Additionally, you should also recruit the Rot Flies - they are not as fast as Chaos Furies, but they deal more damage and pierce armor.

The Nurgle don't have many shooting units. The Soul Grinder of Nurgle is definitely worth investing in - it is a powerful unit and it attacks at long distances. You can also recruit it quite early. In addition, you should consider buying Plague Drones of Nurgle (Death's Heads). It is a flying ranged unit, especially useful if you want to create a large air force.

Recruitment in the Nurgle race differs significantly from that seen in other factions. 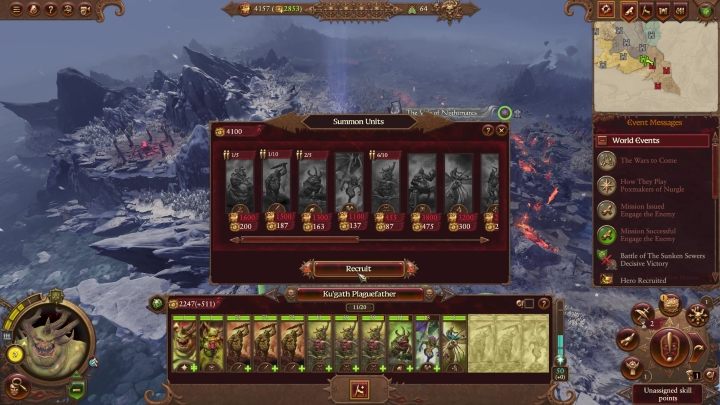 Recruited units automatically go to your army. However, they only start with half of their health. You're also limited as to how many units of a given type you can recruit. Additionally, considering the Seasonal Buildings mechanic (which you can learn more about on the Technologies and Buildings page), the soldiers available for recruitment may differ depending on the turn.

However, this creates quite interesting strategic opportunities. If necessary, you can have a huge army ready in a blink of an eye (though only at half of its strength). This allows you to react quickly to an unexpected threat in difficult situations.

In addition, if necessary, you can quickly make up for losses taken during the war campaign, which will keep your conquest momentum.

The downside is that the Nurgle can't hire units in enemy territory, even in camping mode.

The Nurgle fight style is rather static. They are not fast, and the battle usually comes down to a head-on clash between two armies and waiting for one of the sides to lose its military capability. This does not mean, however, that you have to sit back and do nothing. 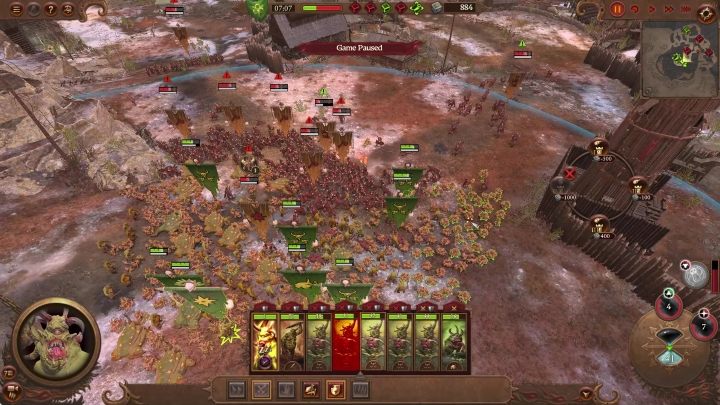 It is definitely worth having a few flying units in reserve. These are your fastest units, so they will occupy enemy artillery and take out enemy shooters.

Remember that you can cast spells, too. Nurgle's great strength lies in their mages, who can change the course of battle. While the soldiers are attacking, your mages in the back rows should weaken the enemy.

Naturally, make sure that you also use the traditional tactics - flanking and surrounding the enemy. This can be difficult, however, since your units are slow.

Nurgle has one legendary lord:

Almost all of Nurgle's lords and heroes are mages, so they shouldn't be put on the front lines; instead they should be kept safe at the back when casting spells. The only exception to this rule is the Cultist of Nurgle, who is decent in melee combat.

In addition, you may have a Plague Cultist in your ranks. This is a special character, because he infects other armies/settlements with plagues you made at the cost of his life. You can't add this hero to your army, though. He can only work independently.