The following page contains tips on useful buildings and technologies for the Khorne faction in Total War Warhammer 3.

The Khorne tech tree is divided into rectangular sections called pillars. To work on research from each next pillar, you must first master 3 technologies from the previous one. 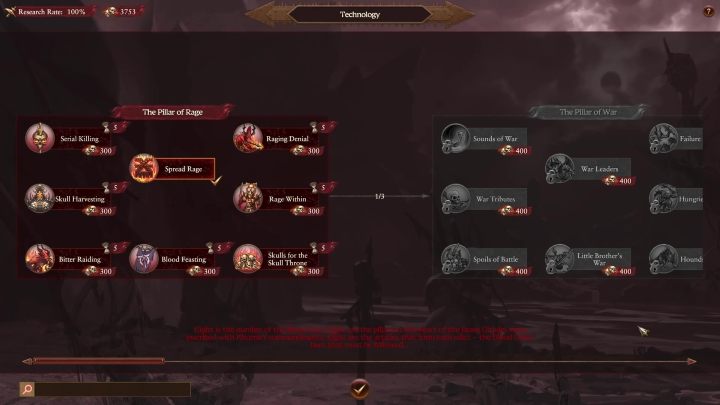 Additionally, you have to pay for technologies with skulls, and each pillar is more expensive than the previous one.

Consider developing technologies that will provide a passive bonus to skulls at the beginning. You can also develop research that will give you bonuses after a battle or settlement destruction. Probably the most important technology in the first turns of the game is Spread Rage , which increases the chance of automatically taking over a settlement within the Train of Destruction mechanic (more about it on a separate page Unique mechanics) and increasing corruption in all provinces.

Naturally, when playing the Khorne faction, you need to start building military structures first to recruit new units. Construct buildings that generate money, too - keeping an army does come with its costs, after all. Remember, however, that you're starting off in demon lands. Make sure that you have a structure that generates Khorne's corruption In provinces threatened by hostile influence. 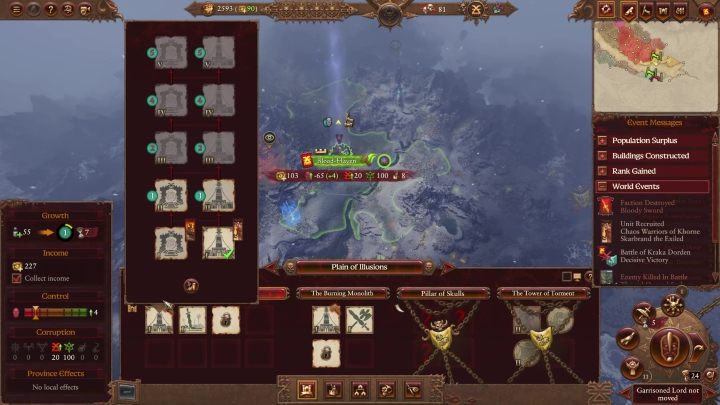 In addition, in the provincial capitals, the Khorne race has 2 types of main building at their disposal - Soul Keep and Dimensional Tear. The first one is a "defensive" building - it spreads your corruption to neighboring provinces, strengthens control, and also gives you a better chance of automatically capturing a settlement within the Train of Destruction mechanic (read more about it on the Unique Mechanics page mentioned earlier). The second one supports the military - you can recruit an additional unit at the same time, military buildings are cheaper and the recruitment cost is lower. Therefore, when choosing between them, think about what you need a given province for.