This page of the guide will introduce you to the unique mechanics of the Ogre Kingdoms in Total War Warhammer 3.

One of the unique mechanics of this faction is the ability to give Great names. If a Lord reaches certain milestones, he can be given a name (once every ten turns). It will give you various bonuses.

To do this, enter the character information panel. Choose the lord, and you'll find the button in the lower left corner, under his portrait. 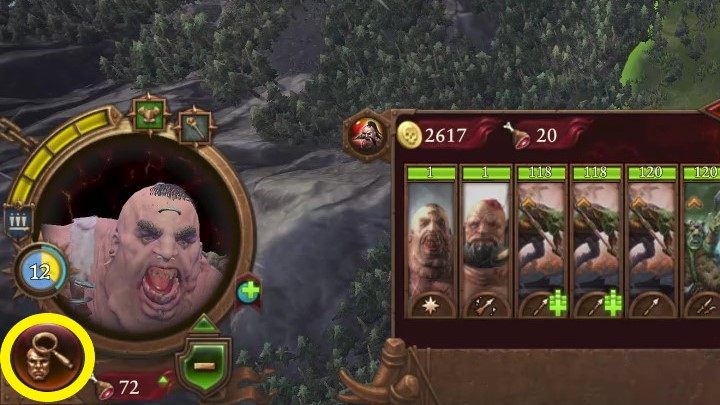 Then, just go to the Big Names tab and choose the nickname that suits you. As long as it is unlocked. 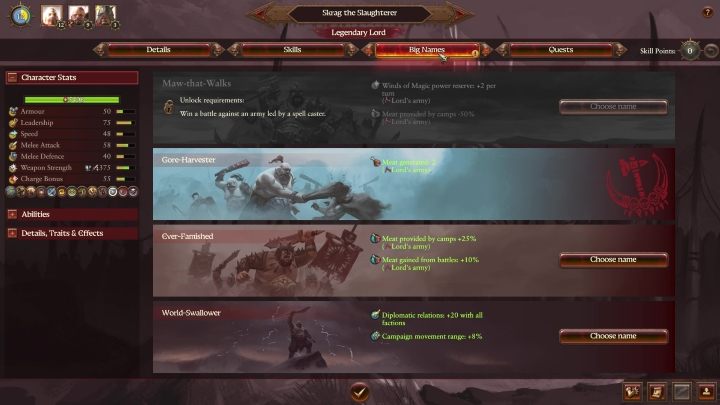 Meat is another important and unique mechanic for the Ogre Kingdoms. It is a resource consumed by your warriors. The bigger the army, the more food it needs. Remember that this is not a "nationwide" resource, and each military has its own meter. 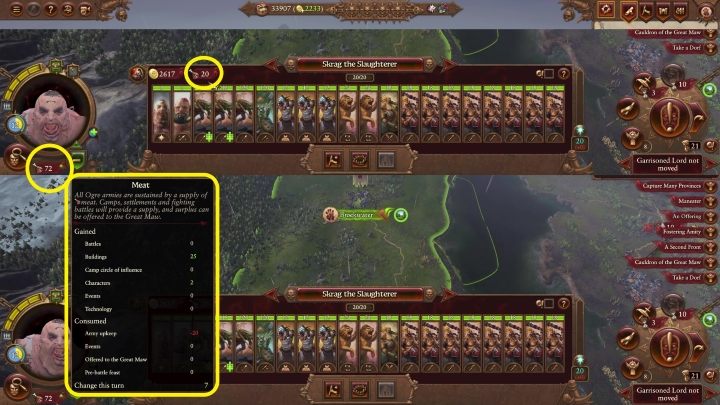 If you choose an army, you will see a meat icon next to its maintenance costs. It tells you how much meat your army eats every turn. The rule is simple - each unit consumes one piece of meat.

The amount of meat you currently have is below the lord's portrait. A green up arrow or a red down arrow indicates whether your supply is increasing or decreasing. If you hover the cursor over this meter, you will see a detailed list of factors that currently affect this number.

The most effective way to provide enough meat for the army is to station it near the camps. Then the food consumption automatically drops to 0. Of course, this is not always feasible; the other main factors that affect the amount of meat are battles, buildings inside the settlement and technologies.

If you run out of meat, the army will start to suffer losses due to attrition.

Ogre Kingdoms can't upgrade buildings above level 3 in settlements. Therefore, Ogre Camps play an important role in their development. This is another unique mechanic available to this race. It allows you to build your own "settlements". They can even be placed in neutral/hostile areas, as long as they are not too close to existing settlements. These structures allow you to recruit higher-rank soldiers.

To build a camp, select an army and press the button under its list of units. The construction costs 2000, and the number of camps you can have at a time is limited. You will increase it with appropriate technologies. 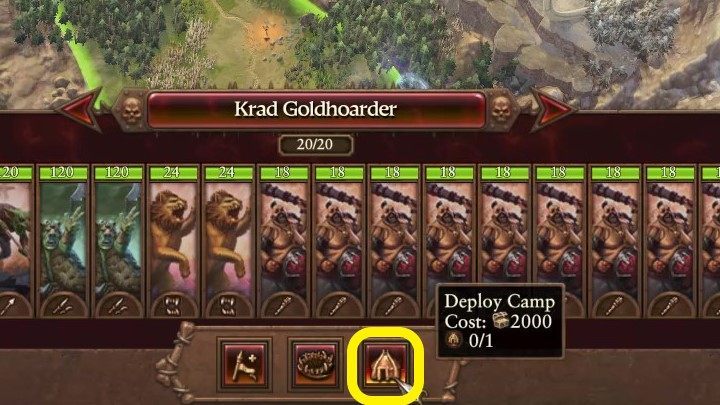 After pressing the button, a camp will be created automatically at the army's location. It can be managed in a similar way to other settlements, but there are some differences - you can learn more about it on a separate page of the guide - Technologies and Buildings. 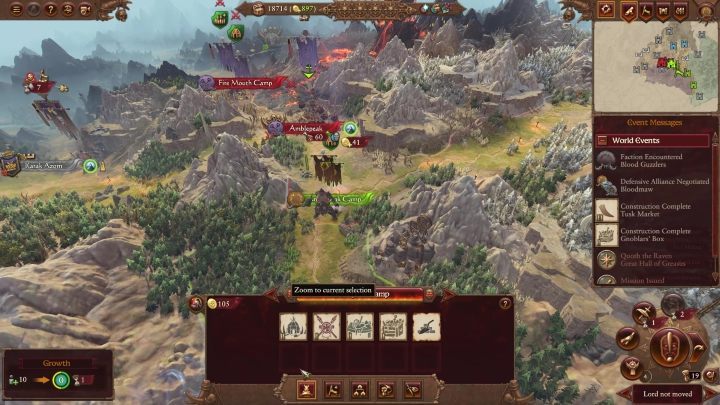 The camps also feature a garrison that you can recruit directly into your armies. You can also refill the units in the garrison. This means that the garrison allows you to "make up" for the losses on the front very quickly.

You can recruit soldiers near the camp, even in hostile areas - as if you were in your own province.

Other races may recruit units from ogre camps, as long as they are not at war with them.

This is another mechanic unique to the Ogre Kingdoms. Every 10 turns you get 3 contracts from different countries, out of which you can choose one. These are usually tasks involving killing someone, conquering a settlement or plundering something. 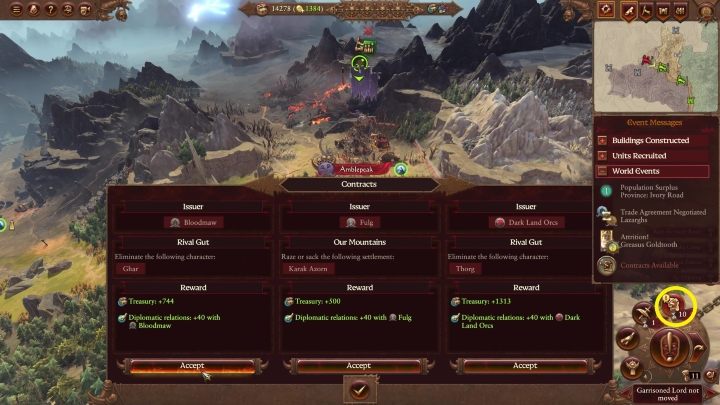 You can select the list of contracts from the wheel menu in the lower right corner of the screen. You will then see a list of tasks, contract givers and targets, as well as information about the rewards you will receive for them. This isn't just gold - you will also get an increase in your relationship with that nation. Once you select a contract, the game will treat it as any other mission.

The amount of gold you'll get as a contract reward can be increased by using technology.

Before each battle, you can decide whether you want to sacrifice some meat to receive bonuses during the fight. If you have enough meat, you can spend some of it (max 5) to make the task easier. 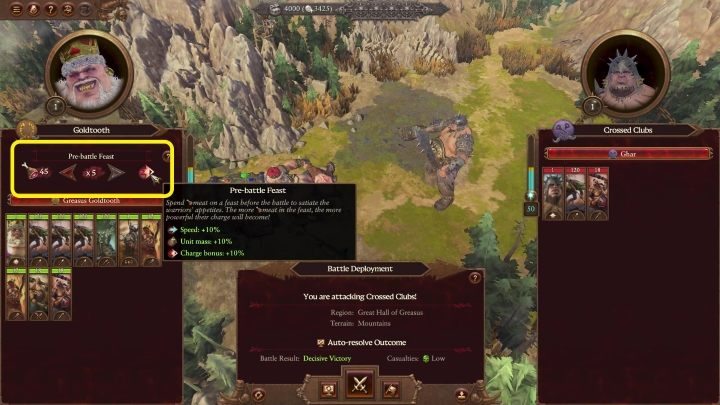 A sacrifice to the Great Maw

Each army may sacrifice some of its meat at any time to the Great Maw to get certain bonuses in return. To do so, use the button with a jaw icon below the unit list. 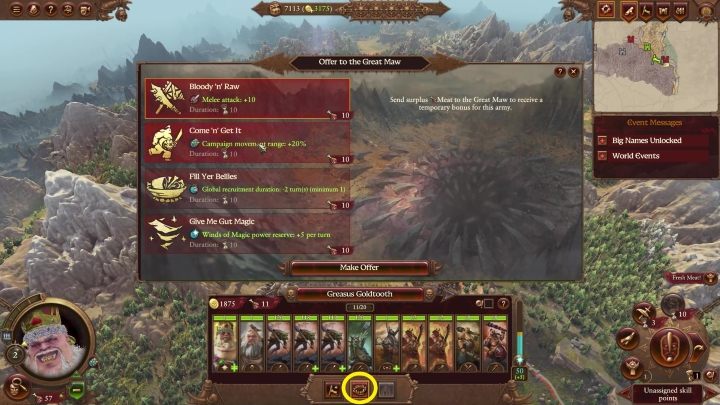 The lit of offerings to the Great Maw