On this page of the guide to Total War Warhammer 3 you'll find information about the strategies that can be implemented by the Grand Cathay faction. You'll also learn about its lords as well as its army's strengths and weaknesses.

Grand Cathay's army is built for ranged combat. This faction has plenty of units ideal for killing enemies from a distance but with low mobility.

As pictured above, Grand Cathay's military features many ranged squads and several types of artillery. This is the army's biggest strength. It's a good idea to recruit many Jade Warrior Crossbowmen and Iron Hail Gunners who make up for their shorter range with solid firepower. You should also remember the Crane Gunners - they have incredibly long range and deal a lot of damage, being excellent at weakening the enemy's strongest units, such as lords and heroes. If you supplement these units with artillery you should be able to break the enemy before they even reach your lines. Later on in the game you should replace Jade Warrior Crossbowmen with Celestial Dragon Crossbowmen, but only if you can afford it. 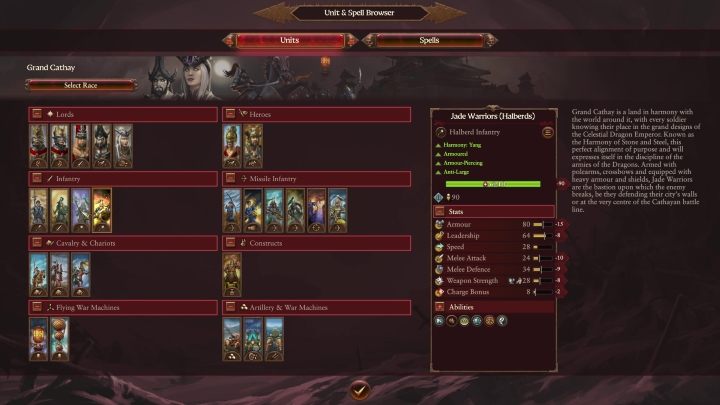 You obviously need someone to stand in front of your ranged units. The core of your melee army should be formed out of Jade Warriors wielding swords and shields. Supplement them with one or two squads of Jade Warriors wielding halberds (to repel cavalry or larger creatures). Later on in the game you should also recruit some titanic Terracotta Sentinels as well as the elite (and expensive) Celestial Dragon Guard.

Unfortunately Grand Cathay's mobility leaves much to be desired. Despite having access to three different kinds of cavalry, their usefulness is debatable. Jade Lancers have solid armor and striking power but are quite slow, which means they aren't very good at charging and retreating, the best strategy for shock cavalry. Later on in the game you should consider recruiting some Great Longma Riders. They serve as aerial cavalry and can open up some new strategic opportunities for you thanks to their mobility.

Maintain the formation. Cathayans have a unique Harmony mechanic (you'll learn more about it on the Unique mechanics page). This mechanic functions in the army as well, although not as complex. Your squads are affiliated with Yin or Yang. If you place squads with opposite affiliations next to each other they'll gain stat bonuses! Remember about this - it can change the tide of battle.

Take advantage of your superior firepower. If you're defending yourself, point the gunners in the right direction and wait for them to bleed the enemy dry. This way you can also weaken specific dangerous units before the battle begins - lords, heroes or giants.

In case you're the one attacking, try doing the same thing. Use your artillery and ranged units to disrupt the enemy ranks. You may provoke them to rush you, and if you don't, you'll significantly weaken them before your infantry strikes.

They're siblings, but despite their bloodties each one owns their own country. You can theoretically cause them to join a single faction via confederacy. The lords are considerably reluctant to do so, however, and can effectively block all your attempts, especially in the early game.

Both of the legendary lords can turn into flying dragons. This grants them melee bonuses but prevents them from casting spells (they can turn back into humans if they need to).

Other lords can join your army as well, both spellcasters and melee fighters. You should know that Grand Cathay can only recruit magic-wielding heroes.

Each spellcasting lord has a Yin or Yang affiliation. You should pay attention to it when recruiting them, as it influences your Harmony (you'll learn more about it by checking the Unique mechanics page).