On this page of the guide to Total War Warhammer 3 you'll find information about the military, strategies and lords of the Slaanesh faction.

Slaanesh's units are very fast which you should use to your advantage. Their troops are ideal for flanking and attacking from several directions at once. They also have a good selection of cavalry and chariots. 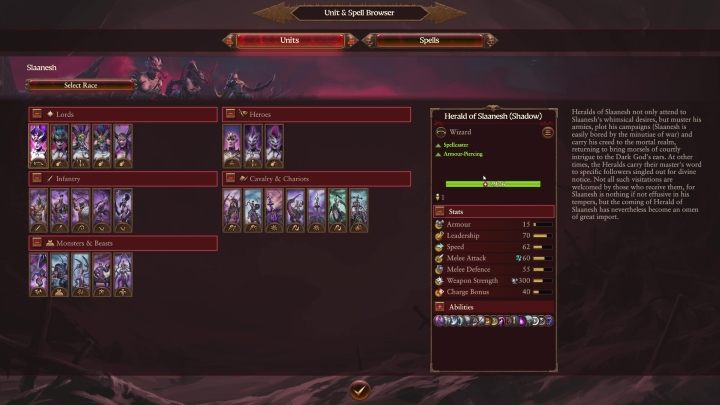 Unfortunately, their mobility comes at the cost of low armor parameters. This means you should avoid battles of attrition. They also don't have any artillery or ranged units.

However, they do have access to squads with the frontal guard skill. This means that during the deployment phase they can be placed in the center of the battlefield. Use this to hide your troops and ambush the enemies or attack their backline.

The faction also has plenty of monster units which are very useful during battle. They can eat through enemies (often literally) with immense speed. The faction has access to some very large beasts.

Traditional formations don't work with this faction. Try to flood the battlefield with your units. Avoid big skirmishes. Don't wait for your opponent to come to you. Use fast units to scatter incoming enemies and separate them into smaller groups your main forces can handle easily.

If you're the one attacking try to go for fake-out attacks, make the enemy gather on several fronts and attack wherever you see a weak spot - flying units are especially helpful here.

You can also overcome the enemy ranks with powerful monsters but they're not enough to create a front on their own - they can breach hostile lines though to make the job easier for your remaining squads.

The legendary Lord N'Kari is a sorcerer able to cast powerful spells. Among all the lords and heroes available to this faction only one of them is a melee specialist. This means you shouldn't place your commanders in the frontlines. You should keep them behind your main forces instead and let them weaken enemies/strengthen allies.